Applying state of the art deep learning models to novel real world datasets gives a practical evaluation of the generalizability of these models. Of importance in this process is how sensitive the hyper parameters of such models are to novel datasets as this would affect the reproducibility of a model. We present work to characterize the hyper parameter space of an LSTM for language modeling on a code-mixed corpus. We observe that the evaluated model shows minimal sensitivity to our novel dataset bar a few hyper parameters. 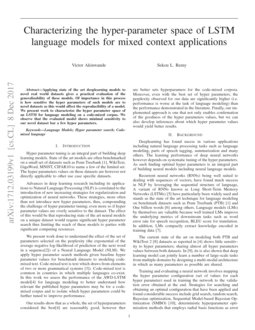 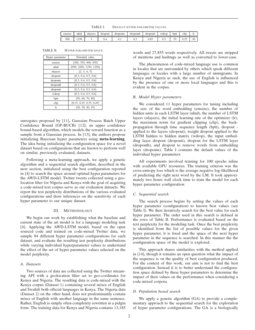 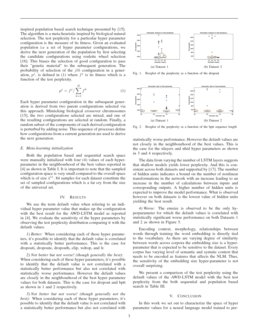 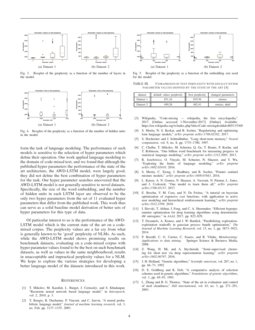 In recent years there have been many deep learning approaches towards th...
Jeroen Zegers, et al. ∙

Echo State Networks with Self-Normalizing Activations on the Hyper-Sphere

What augmentations are sensitive to hyper-parameters and why?

We apply augmentations to our dataset to enhance the quality of our pred...
Ch Muhammad Awais, et al. ∙

Much recent research has been conducted in the area of Bayesian learning...
James Brofos, et al. ∙

Hyper parameter tuning is an integral part of building deep learning models. State of the art models are often benchmarked on a small set of datasets such as Penn Treebank [1], WikiText, GigaWord, MNIST, CIFAR10 to name a few of the limited set. The hyper parameters values on these datasets are however not directly applicable to other use case specific datasets.

Advances in deep learning research including its applications to Natural Language Processing (NLP) is correlated to the introduction of new increasing strategies for regularization and optimization of neural networks. These strategies, more often than not introduce new hyper parameters, thus, compounding the challenge of hyper parameter tuning; even more so if hyper parameter values are overly sensitive to the dataset. The effect of this would be that reproducing state of the art neural models on a unique dataset would require significant hyper parameter search thus limiting the reach of these models to parties with significant computing resources.

We present work done to understand the effect of the set of parameters selected on the perplexity (the exponential of the average negative log-likelihood of prediction of the next word in a sequence[2]) of a Neural Language Model (NLM). We apply hyper parameter search methods given baseline hyper parameter values for benchmark datasets to modeling code-mixed text. Code-mixed text is text which draws from elements of two or more grammatical systems [3]). Code-mixed text is common in countries in which multiple languages co-exist. In this work we assess the performance of the AWD-LSTM model[4] for language modeling to better understand how relevant the published hyper parameters may be for a code-mixed corpus and to isolate which hyper parameters could be further tuned to improve performance.

Our results show that as a whole, the set of hyperparameters considered the best

[4] are reasonably good, however ther are better sets hyperparamers for the code-mixed corpora. Moreover, even with the best set of hyper parameters, the perplexity observed for our data are significantly higher (i.e. performance is worse at the task of language modeling) than the performance demonstrated in the literature. Finally, our implemented approach is one that not only enables confirmation of the goodness of the hyper parameters values, but we can also develop inferences about which hyper parameter values would yield better results.

Deeplearning has found sucess in various applications including natural language processing tasks such as language modeling, parts of speech tagging, summarization and many others. The learning performance of deep neural networks however depends on systematic tuning of the hyper parameters. As such finding optimal hyper parameters is an integral part of building neural models including neural language models.

Recurrent neural networks (RNNs) being well suited to dealing with sequences of vectors, have found much success in NLP by leveraging the sequential structure of language, A variant of RNNs known as Long Short-Term Memory Networks (LSTMs) [5] have particularly been widely used and stands as the state of the art technique for language modeling on benchmark datasets such as Penn Treebank (PTB) [1] and One billion words [6] among others. Language models (LMs) by themselves are valuable because well trained LMs improve the underlying metrics of downstream tasks such as word error rate for speech recognition, BLEU score for translation. In addition, LMs compactly extract knowledge encoded in training data [7].

The current state of the art on modeling both PTB and WikiText 2 [8] datasets as reported in [4] shows little sensitivity to hyper parameters; sharing almost all hyper parameters values between both datasets. In [9], its is also shown that deep learning model can jointly learn a number of large-scale tasks from multiple domains by designing a multi-modal architecture in which as many parameters as possible are shared.

Training and evaluating a neural network involves mapping the hyper parameter configuration (set of values for each hyper parameter) used in training the network to the validation error obtained at the end. Strategies for searching and obtaining an optimal configuration that have been applied and found considerable success include grid search, random search, Bayesian optimization, Sequential Model-based Bayesian Optimization (SMBO) [10]

[11], Gaussian Process Batch Upper Confidence Bound (GP-BUCB) [12]; an upper confidence bound-based algorithm, which models the reward function as a sample from a Gaussian process. In [13], the authors propose initializing Bayesian hyper parameters using meta-learning. The idea being initializing the configuration space for a novel dataset based on configurations that are known to perform well on similar, previously evaluated, datasets.

Following a meta-learning approach, we apply a genetic algorithm and a sequential search algorithm, described in the next section, initialized using the best configuration reported in

[4] to search the space around optimal hyper parameters for the AWD-LSTM model. Twitter tweets collected using a geo-location filter for Nigeria and Kenya with the goal of acquiring a code-mixed text corpus serve as our evaluation datasets. We report the test perplexity distributions of the various evaluated configurations and draw inferences on the sensitivity of each hyper parameter to our unique dataset.

We begin our work by establishing what the baseline and current state of the art model is for a language modeling task [4]. Applying the AWD-LSTM model, based on the open sourced code and trained on code-mixed Twitter data, we sample 84 different hyper parameter configurations for each dataset, and evaluate the resulting test perplexity distributions while varying individual hyperparameter values to understand the effect of the set of hyper parameter values selected on the model perplexity.

Two sources of data are collected using the Twitter streaming API with a geolocation filter set to geo-cordinates for Kenya and Nigeria. The resulting data is code-mixed with the Kenya corpus (Dataset 1) containing several mixes of English and Swahili both official languages in Kenya. The Nigeria data (Dataset 2) on the other hand, does not predominantly contain mixes of English with another language in the same sentence. Rather, English is simply often completety rewritten in a pidgin form. The training data for Kenya and Nigeria contains 13,185 words and 27,855 words respectively. All tweets are stripped of mentions and hashtags as well as converted to lower-case.

The phenomenon of code-mixed language use is common in locales that are surrounded by others which speak different languages or locales with a large number of immigrants. In Kenya and Nigeria as such, the use of English is influenced by the presence of one or more local languages and this is evident in the corpus.

We considered 11 hyper parameters for tuning including the size of the word embedding (emsize), the number of hidden units in each LSTM layer (nhid), the number of LSTM layers (nlayers), the initial learning rate of the optimizer (lr), the maximum norm for gradient clipping (clip), the backpropagation through time sequence length (bptt), dropout - applied to the layers (dropout), weight dropout applied to the LSTM hidden to hidden matrix (wdrop), the input embedding layer dropout (dropouti), dropout for the LSTM layer (dropouth), and dropout to remove words from embedding layer (dropoute). Table

I contains the default values of the individual hyper parameters.

All experiments involved training for 100 epochs inline with available GPU resources. The training criteron was the cross-entropy loss which is the average negative log-likelihood of predicting the right next word by the LM. It took approximately two hours wall clock time to train the model for each hyper parameter configuration.

We apply a genetic algorithm (GA) to provide a complementary approach to the sequential search for the exploration of hyper parameter configurations. The GA is a biologically inspired population based search technique presented by [15]

. This biases the selection of good configuration to pass their ”genetic material” to the subsequent generation. The probability of selection of the

jth configuration in a generation, pj, is defined in (1) where fj is its fitness which is a function of the test perplexity.

Both the population based and sequential search space were manually initialized with four (4) values of each hyper-parameter in the neighbourhood of the best values reported in [4] as shown in Table I. It is important to note that the sampled configuration space is very small compared to the overall space which is of size 411. 84 samples for each dataset constitute the set of sampled configurations which is a far cry from the size of the universal set.

We use the term default value when refering to an individual hyper parameter value that makes up the configuration with the best result for the AWD-LSTM model as reported in [4]. We evaluate the sensitivity of the hyper parameters by observing the test perplexity distribution comparing it with the default values.

When considering each of these hyper parameters, it’s possible to identify that the default value is correlated with a statistically better performance. This is the case for dropouti, dropoute, dropouth, clip, wdrop, and lr.

Iv-2 Not better but not worse! (though generally the best)

When considering each of these hyper parameters, it’s possible to identify that the default value is not correlated with a statistically better performance but also not correlated with statistically worse performance. However the default values are closely in the neighbourhood of the best hyper parameter values for both datasets. This is the case for dropout and bptt as shown in 1 and 2 respectively.

Iv-3 Not better but not worse! (though generally not the best)

When considering each of these hyper parameters, it’s possible to identify that the default value is not correlated with a statistically better performance but also not correlated with statistically worse performance. However the default values are not closely in the neighbourhood of the best values. This is the case for the nlayers and nhid hyper parameters as shown in 3 and 4 respectively.

The emsize is observed to be the only hyperparameter for which the default values is correlated with statistically significant worse performance on both Datasets 1 and 2 as shown in Figure 5.

Encoding context, morphology, relationships between words through training the word embedding is directly tied to the vocabulary. As there are varying degree of similarity between words across corpora the embedding size is a hyper-parameter that is expected to be sensitive to the dataset. Every corpus has varying level of semantic and syntatic context that needs to be encoded as features that affects the NLM. Thus, the sensitivity of the embedding size hyper-parameter is not overall surprising.

We present a comparison of the test perplexity using the default values of the AWD-LSTM model with the best test perplexity from the both sequential and population based search in Table III.

Of particular interest to us is the performance of the AWD-LSTM model which is the current state of the art on a code-mixed corpus. The perplexity values are a far cry from what is generally known to be ‘good’ perplexity of NLMs. As such, while the AWD-LSTM model shows promising results on benchmark datasets, evaluating on a code-mixed corpus with hyper parameter values found to be the best on such benchmark datasets, as well as values in the same neighbourhood, results in unacceptable and impractical perplexity values for a NLM. We hope to explore the various strategies for developing a better language model of the datasets introduced in this work.