In this note, we show how to obtain a "characteristic power series" of graphons -- infinite limits of graphs -- as the limit of normalized reciprocal characteristic polynomials. This leads to a characterization of graph quasi-randomness and another perspective on spectral theory for graphons, including a complete description of the function in terms of the spectrum of the graphon as a self-adjoint kernel operator. 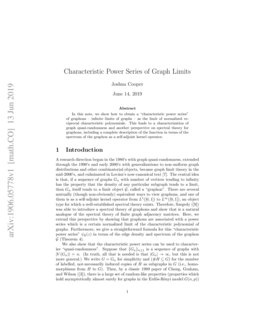 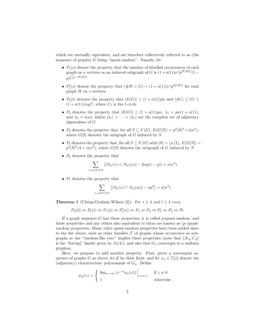 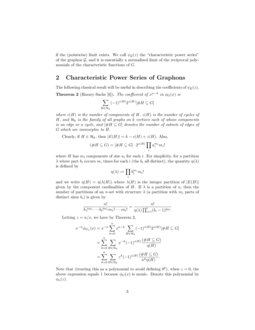 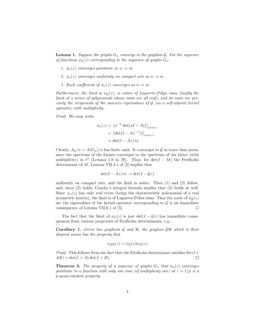 We design a fast algorithm that computes, for a given linear differentia...
Raphaël Pagès, et al. ∙

In this paper, we investigate the power functions F(x)=x^d over the fini...
Ziran Tu, et al. ∙

A research direction began in the 1980’s with graph quasi-randomness, extended through the 1990’s and early 2000’s with generalizations to non-uniform graph distributions and other combinatorial objects, became graph limit theory in the mid-2000’s, and culminated in Lovász’s now-canonical text [7]. The central idea is that, if a sequence of graphs Gn with number of vertices tending to infinity has the property that the density of any particular subgraph tends to a limit, then Gn itself tends to a limit object G, called a “graphon”. There are several mutually (though non-obviously) equivalent ways to view graphons, and one of them is as a self-adjoint kernel operator from L1([0,1]) to L∞([0,1]), an object type for which a well-established spectral theory exists. Therefore, Szegedy ([9]) was able to introduce a spectral theory of graphons and show that is a natural analogue of the spectral theory of finite graph adjacency matrices. Here, we extend this perspective by showing that graphons are associated with a power series which is a certain normalized limit of the characteristic polynomial of graphs. Furthermore, we give a straightforward formula for this “characteristic power series” ψG(z) in terms of the edge density and spectrum of the graphon G (Theorem 4).

We also show that the characteristic power series can be used to characterize “quasi-randomness”. Suppose that {Gn}n≥1 is a sequence of graphs with |V(Gn)|=n. (In truth, all that is needed is that |Gn|→∞, but this is not more general.) We write G=Gn for simplicity and (#H⊆G) for the number of labelled, not-necessarily induced copies of H as subgraphs in G (i.e., homomorphisms from H to G). Then, by a classic 1989 paper of Chung, Graham, and Wilson ([3]), there is a large set of random-like properties (properties which hold asymptotically almost surely for graphs in the Erdős-Rényi model G(n,p)) which are mutually equivalent, and are therefore collectively referred to as (the sequence of graphs) G being “quasi-random”. Namely, let

Here, we propose to add another property. First, given a convergent sequence of graphs G as above, let G be their limit, and let ϕn∈C[x] denote the (adjacency) characteristic polynomials of Gn. Define

if the (pointwise) limit exists. We call ψG(z) the “characteristic power series” of the graphon G

, and it is essentially a normalized limit of the reciprocal polynomials of the characteristic functions of

The following classical result will be useful in describing the coefficients of ψG(z).

where H has mi components of size ai for each i. For simplicity, for a partition λ where part bi occurs mi times for each i (the bi all distinct), the quantity η(λ) is defined by

and we write η(H)=η(λ(H)) where λ(H) is the integer partition of |E(H)| given by the component cardinalities of H. If λ is a partition of n, then the number of partitions of an n-set with structure λ (a partition with mi parts of distinct sizes bi) is given by

Note that (treating this as a polynomial to avoid defining 00), when z=0, the above expression equals 1 because ϕG(x) is monic. Denote this polynomial by ϕn(z).

Furthermore, the limit is ψG(z), is entire of Laguerre-Pólya class (locally the limit of a series of polynomials whose roots are all real), and its roots are precisely the reciprocals of the nonzero eigenvalues of G (as a self-adjoint kernel operator) with multiplicity.

uniformly on compact sets, and the limit is entire. Then (1) and (2) follow, and, since (2) holds, Cauchy’s integral formula implies that (3) holds as well. Since ϕn(z) has only real roots (being the characteristic polynomial of a real symmetric matrix), the limit is of Laguerre-Pólya class. That the roots of ψG(z) are the eigenvalues of the kernel operator corresponding to G is an immediate consequence of Lemma VII.6.1 of [5]. ∎

The fact that the limit of ϕn(z) is just det(I−Gz) has immediate consequences from various properties of Fredholm determinants, e.g.:

Given two graphons G and H, the graphon GH which is their disjoint union has the property that

This follows from the fact that the Fredholm determinant satisfies det(I+AB)=det(I+A)det(I+B). ∎

The property of a sequence of graphs Gn that ϕn(z) converges pointwise to a function with only one root (of multiplicity one) at z=1/p is a p-quasi-random property.

Let G be the p-uniform graphon, i.e., the limit of a p-quasirandom graph sequence. Convergence of the coefficients of ϕn(z) to those of ψG(z), which is implied by pointwise convergence by Cauchy’s Integral Formula, is equivalent to p-quasirandomness, by property P′1. Therefore, by Theorem 1, ϕn(z) converges pointwise to ψG(z) if and only if Gn converges to G, i.e., G is p-quasirandom. By Lemma 1 and Hurwitz’s Theorem, coefficient convergence implies root convergence, in the sense that every ϵ ball, for ϵ>0 sufficiently small, about a zero of ψG(z) of multiplicity m will contain exactly m roots of ϕn(z) for sufficiently large n, including for roots at infinity. If G is p-quasirandom, then by P3 the eigenvalues of Gn are pn+o(n) (once) and o(n) (with multiplicity n−1), so the roots of ϕn(z) are 1/p (once) and some n−1 roots the smallest modulus of which tends to infinity. Thus, ψG(z) has a root of multiplicity one at 1/p and no other roots. ∎

One consequence of the above result is that the set of linear combinations of subgraph counts (a.k.a. the density statistics of “quantum graphs”) occurring as the coefficients of powers of z in ψG(z) are forcing sets for p-quasirandomness. Actually, this is easy to see directly. If the edge density is p+o(1), then the coefficient of z2 is

and the coefficient of z4 is

The fact that ψG(z) is Laguerre-Pólya class implies that it has a Hadamard product expression (see [1]):

where m is a nonnegative integer; b and c are real with c≤0; and r ranges over the nonzero zeros of ψG(z). We can use this to obtain a formula for the characteristic polynomial of any graphon as a function of its nonzero eigenvalues and its edge density, since the roots of ψG are the reciprocals of the nonzero eigenvalues of G.

Letting p be the edge-density of a graphon G (i.e., p=∬G) and S its spectrum, we have

implies that m=0 and a=0 because ψG(0)=1, since the constant coefficient of ψn(z) is 1. Furthermore, we may include the zero eigenvalues in this product without effect. Then

Now, the coefficient of z2 in this expression is

the characteristic power series has been factored into a polynomial whose roots are the reciprocals of the nonzero eigenvalues of G and an exponential term. The quantity trG is zero if G is bipartite, in which case ψG(z)

has no monomials of odd degree:

Furthermore, ∥G∥22=∥G∥11 iff G is a 0-1 function except for a set of measure zero, as with a simple blow-up of a graph (sometimes called a “pixel diagram”), so the quadratic term vanishes in the exponential, resulting in

We can also use (2) to obtain a simple expression for the characteristic power series of p-quasi-random graphons.

where Λ(k;i,j) is the set of integer partitions of k into j parts of size at least 2, of which i are of size exactly 2.

By Theorem 3, G is p-quasirandom iff

because partitions of k into parts of size at least 2 correspond bijectively to elements of Hk. That this equals the right-hand side of (3) follows from Theorem 4 and the fact (from, say, [7], section 11.8, or the proof of 3 above) that a p-quasirandom graphon has a single nonzero eigenvalue p of multiplicity one. However, we show the result directly here.

If α(z)=exp(β(z)) is a power series, where the zn coefficient of α is ak and the zk coefficient of β is bk, then (by standard facts about exponential generating functions, see, e.g., [2]), letting λ be an integer partition with mi parts of distinct sizes ci, i=1 to t,

where Π is the set of (set) partitions of an k-set. Thus, if

Here we leave the interested reader with a few questions.

Let G be the p-quasirandom graphon. The function

has some unexplained connections with Gaussian probability distributions. If

is the moment generating function of a normal distribution of mean

For which other graph polynomials can the above type of limit process be carried out? By [10], chromatic polynomials of Erdős-Rényi random graphs appear to have a scaling limit, for example.

It is straightforward to show (by, for example, applying Turán’s Inequalities; see [8]) that the coefficients ck of ψG are log-concave for any graphon G, but the consequences of this for unimodality are unclear because we do not know the sign pattern of the coefficients of ψG(z). For example, the characteristic power series of a p=1/2 quasi-random graphon has sign pattern

More specifically, can ck=0 if k≠1?

How can the above analysis be extended to sparse graphon types or hypergraphs? Perhaps, one can use the below generalization of Theorem 2 to hypergraphs.

Let H be a k-uniform hypergraph on n vertices. If Vi denotes the set of k-uniform Veblen multi-hypergraphs (i.e., all vertices have degree divisible by k), and ci denotes the codegree-i coefficient in the characteristic polynomial of H, then