It is well known that transmitting classical information over quantum networks can significantly improve communication rates and achieve secure communication. These quantum advantages crucially rely on the network's innate ability to distribute classical correlations reliably and securely. To this end, it is of significant interest to understand how classical information propagates in quantum networks. Here, we report a computational toolbox that is able to characterise the stochastic matrix of any classical-quantum network, assuming only the inner-product information of the quantum code states. The toolbox is hence highly versatile and can analyse a wide range of quantum network protocols, including those that employ infinite-dimensional quantum states. To demonstrate the feasibility and efficacy of our toolbox, we use it to reveal new results in multipartite quantum distributed computing and quantum cryptography. Taken together, these findings suggest that our method may have important implications for quantum network information theory and the development of new quantum technologies. 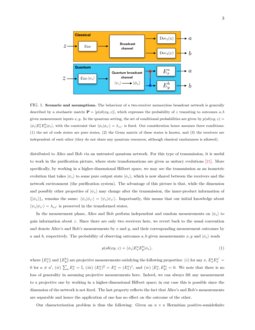 Appendix A Convergence of the hierarchy

In the main text we saw how to construct an infinite sequence of decreasing semidefinite programming outer approximations to the quantum set Q(λ). In the following, we show that the proposed hierarchy converges to Q(λ). The proof is a straightforward generalisation of the convergence proof from Miguel2008 .

For any integer ℓ≥1 let SDPℓ be the semidefinite program of size n|Sℓ|×n|Sℓ| defined by the linear constraints identified in the main text. Let Gℓ be a feasible solution to SDPℓ. For the convergence proof, it is instructive to think of Gℓ as an n×n block matrix, where each block has size |Sℓ|×|Sℓ|, i.e.,

where the entries of Gℓ,zz′ are indexed by Sℓ. Furthermore, let Q(λ)ℓ be the projection of the set of feasible solutions to SPDℓ to the relevant coordinates, i.e.,

We have already seen that Q(λ)⊆∩∞ℓ=1Q(λ)ℓ. We now show the other inclusion.

We start with some comments concerning the proof. First, to ease notation, we assume that measurement outcomes uniquely define the measurement they correspond to. We denote by X(a) (resp. X(b)) the measurement corresponding to Alice’s outcome a (resp. Bob’s outcome b). This convention allows us to write p(ab|z) as opposed to p(ab|xy,z), which is used in the main text. A quantum realization of p(ab|z) is given by p(ab|z)=⟨ϕz|EaEb|ϕz⟩, where E†a=Ea, EaEa′=δa,a′Ea if X(a)=X(a′), and [Ea,Eb]=0. Second, for any z,z′∈[n], the |Sℓ|×|Sℓ| matrix Gℓ,zz′ is indexed by the operators in the set Sℓ. Operators U,Ea,EaU, and I will be associated with row or column indices, u,a,au, and 1, respectively. Consider a distribution p(ab|z)∈∩∞ℓ=1Q(λ)ℓ and let Gℓ be a level-ℓ certificate.

where Gℓ(z,u),(z′,v) is the (u,v) entry of Gℓ,zz′ As Gℓ is positive semidefinite, it suffices to show that

As this matrix is PSD, its determinant is nonnegative. Combined with (A3), this implies that

Step 2: Next we embed all matrices Gℓ in a single normed space (we need to do this as they have different sizes) where the sequence has a convergent subsequence. For this, we append zeros to extend each matrix Gℓ to an infinite matrix ^Gℓ, which is indexed by all words |u|,|v|=0,1,2,...

Now, by Step 1, all matrices ^Gℓ lie in the unit ball of the Banach space ℓ∞. Furthermore, it is well-known that ℓ∞ is the dual space of ℓ1 RS . Thus, by the Banach-Alaogly theorem RS , the sequence (^Gℓ)ℓ has a convergent subsequence, with respect to the weak∗ topology, i.e., there exists an infinite matrix G∞ such that

Equation (A4) has two important consequences. First, by the definition of the weak* topology, it also implies point-wise convergence, i.e.,

Second, the infinite matrix G∞ is a PSD kernel PSDkernel . As Gℓ is feasible for SDPℓ we have that

which combined with (A5) implies that

Furthermore, as G∞ is a PSD kernel, there exists a (possibly infinite dimensional) Hilbert space (H,⟨⋅,⋅⟩)

This process is the infinite dimensional analogue of the Cholesky decomposition Horn2013 .

Step 3: Using the vectors from (A8) we construct a quantum realization for p(ab|z)∈∩∞ℓ=1Q(λ)ℓ. Specifically, for z∈[n] define the quantum states |ψz⟩=|x(z,1)⟩ and the measurement operators

It remains to show that ~Ea,~Eb such that p(a,b|z)=⟨ψz|~Ea~Eb|ψz⟩. From the relation

In particular, (A12) implies that

Furthermore, we have that

Setting u=1, Equation (A15) implies that

Likewise, we get that

which in turn implies that

The last step of the proof is to show that [~Ea,~Eb]=0. For this note that (EaU)†EbV=(EbU)†EaV which implies that

In turn, using (A20) this is equivalent to

Here we present the semidefinite program for the distributed QRAC protocol. To start with, let us first present the quantum characterisation problem, which is modelled by a set of projective operators {Aax}a,x and {Bby}b,y where a,b,x,y∈{0,1} and a set of transformed quantum code states {|ϕz⟩}z, where z=(z0,z1)∈{0,1}2. For clarity, in this section we have changed the notation of the measurement operators from Eax to Aax to distinguish Alice’s measurement operators from Bob’s. We assume nothing about these operators and states, except that the Gram matrix of {|ϕz⟩}z coincides with the Gram matrix of the vectors {|+⟩,|−⟩,|+i⟩,|−i⟩}. More precisely, we require that ⟨ϕz|ϕz′⟩=λzz′, where

Using this quantum model, Alice’s and Bob’s guessing probabilities are given by

where the quantum code states and measurements are assumed to be randomly chosen (this can be easily generalised to an arbitrary distribution). To characterise the quantum behaviour of the protocol, we maximise Alice’s guessing probability given that Bob’s guessing probability is set to some fixed value τ∈[1/2,1]. More specifically, we consider the following optimisation problem:

as a classifier, we can partition any feasible solution

As explained in the main text, the matrix G=∑nz,z′Gzz′⊗|ez⟩⟨ez′|, where z=(z0,z1)∈{0,1}2, is Hermitian PSD and furthermore, its entries satisfy certain linear relations corresponding to the algebraic constraints of the measurement operators and the Gram matrix of the code states. More specifically, we have that:

Furthermore, Alice’s guessing probability is given by:

and similarly, Bob’s guessing probability is given by:

Here we analyse the asymptotic security of the phase-encoding coherent-state QKD protocol assuming collective attacks Scarani2009 ; the extension to coherent attacks is straightforward using either the post-selection technique Christandl2009 or the recently developed entropy accumulation theorem Dupuis2016 . The security analysis of the time-encoding QKD protocol is the same. To this end, we first start with a (hypothetical but equivalent) purified state

which is shared between Alice, Bob and Eve after the transmission. The security of this state, with respect to Alice making the qubit measurement {|+⟩⟨+|,|−⟩⟨−|} on her share, is given by the Devetak-Winter’s key distillation bound Devetak2005 and the entropic uncertainty relation for quantum memories Berta2010 :

where X and Y

are random variables corresponding to Alice’s measurement outcomes obtained from