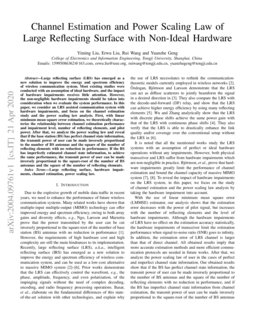 In this paper, we investigate the performance of an RIS-aided wireless c...
Yan Zhang, et al. ∙

Interfering Channel Estimation in Radar-Cellular Coexistence: How Much Information Do We Need?

In this paper, we focus on the coexistence between a MIMO radar and cell...
Fan Liu, et al. ∙

Due to the explosive growth of mobile data traffic in recent years, we need to enhance the performance of future wireless communication systems. Many related works have shown that multiple-input multiple-output (MIMO) technology can offer improved energy and spectrum efficiency, owing to both array gains and diversity effects, e.g., Ngo, Larsson and Marzetta prove that the power transmitted by the user can be cut inversely proportional to the square-root of the number of base station (BS) antennas with no reduction in performance [1]. However, the requirements of high hardware cost and high complexity are still the main hindrances to its implementation. Recently, large reflecting surface (LRS), a.k.a., intelligent reflecting surface (IRS) has emerged as a new solution to improve the energy and spectrum efficiency of wireless communication system, and can be used as a low-cost alternative to massive MIMO system [2, 3, 4, 5, 6]. Prior works demonstrate that the LRS can effectively control the wavefront, e.g., the phase, amplitude, frequency, and even polarization, of the impinging signals without the need of complex decoding, encoding, and radio frequency processing operations. Basar, et al., elaborate on the fundamental differences of this state-of-the-art solution with other technologies, and explain why the use of LRS necessitates to rethink the communication-theoretic models currently employed in wireless networks [2]. Özdogan, Björnson and Larsson demonstrate that the LRS can act as diffuse scatterers to jointly beamform the signal in a desired direction in [3]. They also compare the LRS with the decode-and-forward (DF) relay, and show that the LRS can achieve higher energy efficiency by using many reflecting elements [5]. Wu and Zhang analytically show that the LRS with discrete phase shifts achieve the same power gain with that of the LRS with continuous phase shifts [4]. They also verify that the LRS is able to drastically enhance the link quality and/or coverage over the conventional setup without the LRS in [6].

We consider an LRS-assisted wireless communication system in this paper, as illustrated in Fig. 1. The system consists of an M-antenna BS, an LRS comprising N reflecting elements, and a single-antenna user. In this section, we give the communication system model based on the physically correct system models in prior works [3, 4, 5, 6]. The operations at the LRS is represented by the diagonal matrix Φ=diag(ejθ1,⋯,ejθN), where θi∈[0,2π] represents the phase-shift of the ith reflecting element. The channel realizations are generated randomly and are independent between blocks, which basically covers all physical channel distributions. Denote the channels of BS-user link, BS-LRS link and LRS-user link as hd∈CM×1, G∈CM×N and hr∈CN×1, respectively. They are modeled as ergodic processes with fixed independent realizations, hd∼CN(0,Cd) and HLRS=Gdiag(hr)∼CN(0,CLRS), where CN(⋅)

The communication protocol we adopt for the LRS-assisted system in this paper is based on the protocol proposed in [9], as illustrated in Fig. 2. The channel coherence period τ is divided into three phases: an uplink training phase of τpilot, an uplink transmission phase of τupdata, and a downlink transmission phase of τdowndata. During the uplink training phase, the deterministic pilot signal x is transmitted by the user to estimate channels, where the average power of x is E{|x|2}=pUE. Since the LRS has no radio resources to transmit pilot signals, the BS has to estimate the cascaded channel of G and hr, which is defined as HLRS=Gdiag(hr)=[h1,⋯,hN]

The hardware impairments of LRS can be modeled as phase noise since the LRS is a passive device and high-precision configuration of the reflection phases is infeasible. The phase noise of the ith element of LRS is denoted as Δθi, which is randomly distributed on [−π,π) according to a certain circular distribution. Due to the reasonable assumption in [12], the distribution of the phase noise Δθi has mean direction zero, i.e., arg(E{ejΔθi})=0

, and its probability density function is symmetric around zero. The actual matrix of LRS with phase noise is

Based on the communication system model given above, the received pilot signals yd,y1,⋯,yN∈CM×1 at the BS in different subphases of uplink training phase are

where x∈C is the deterministic pilot signal, and n∈CM×1 is an additive white Gaussian noise with the elements independently drawn from CN(0,σ2BS). The received signal y∈CM×1 at the BS during the uplink data transmission phase from the user is

where x∈C is the transmitted data signal, and the transmit power is pUE=E{|x|2} which is same with the pilot power.

In this section, we analyze the channel estimation performance of the LRS system with LMMSE estimator. The estimated channels include direct channel hd and column vectors hi of cascaded channel HLRS. When we estimate the direct channel in the 1st subphase, all reflecting elements of LRS are OFF. The system can be simplified as a multiple-input single-output (MISO) communication system. The corresponding estimation performance was given in Theorem 1 of [8], which is shown in Lemma 1 as follows.

It should be noted that additive Gaussian noise cannot be eliminated, and the noise term in ˜yi is the superposition of that in yd and yi, which still obeys a Gaussian distribution. Similarly, the power of residual distortion noise caused by hardware impairments is superposed: the distortion noise at the BS in Eq. (7) is ηLRSBS∼CN(0,ΥLRSBS) where ΥLRSBS=κBS(pUE+κUEpUE)diag(2Cd+Ci). In addition, we omit the superposition of hdηUE in Eqs. (2) and (3) since the value of it is very small in practice.

The estimated LRS channel ^hi using LMMSE estimator has a form of ^hi=A˜yi, where A is the detector matrix which minimizes the mean square error (MSE). According to the definition of MSE, we obtain that MSE is the trace of the error covariance matrix, tr(Mi), and Mi is

Then, the detector matrix A which minimizes the MSE can be obtained by equaling the derivative of Eq. (11) with respect to A to zero, as given by

The phase errors of the reflecting elements are random and unknown to the BS in practice. We can only use the statistic characteristics of Δθi to estimate the LRS channel. The result shows that the LRS hardware impairments will not affect the estimation accuracy statistically. Thus, a massive MIMO system can be replaced by an LRS-assisted system with large number of low-quality reflecting elements and moderate number of high-quality antennas, which causes tolerable decrease of estimation accuracy but can reduce hardware cost substantially. In addition, the estimation accuracy will decrease on account of the superposition of noise/distortion power caused by the subtraction operation on signals, and we need more accurate estimation method to compensate this loss.

Consider the special case of Cd=λI and Ci=λI. The covariance matrix of the direct channel estimation error is

where κd=1+κUE+κBS(1+κUE). The covariance matrix of the estimation error of the channel through the ith element of LRS is

where . In the high pilot signal power regime, we have

Thus, perfect estimation accuracy cannot be achieved in practice, not even asymptotically.

Many related works [15, 1, 16] show that the emitted power can be reduced with no reduction in performance by utilizing the array gain in multi-antenna system. One can reduce the transmit power as 1/Mα, 0<α<12, and still achieve non-zero spectral efficiency as M→∞. In this section, we quantify the power scaling law for LRS-assisted wireless communication system. By considering maximum-ratio combining (MRC) detector as it achieves fairly well performance [17, 1], we consider the cases of perfect channel state information and estimated channel state information with error. The received signal at the BS with non-ideal hardware is , where hd, G and hr

are mutually independent matrices whose elements are i.i.d. zero-mean random variables. According to the law of large numbers, we have

where σ2d=E{|hd,i|2} and hd,i is the element of the channel vector hd. According to the rule of matrix multiplication, we obtain

We first consider the case where the BS can obtain perfect channel state information. The detector vector is A=hd+GΦhr when using MRC. As illustrated in Section III, the phase error of LRS is random and unknown to the BS, thus the MRC detector is hd+GΦhr rather than . The transmitted signal can be detected by multiplying the received signal y with AH, i.e., r=AHy. The received signal after using the detector vector A is given as

where, for simplicity, h represents hd+GΦhr and ˜h represents . In addition, the phase noise on LRS will not change the signal power, and the expectation of Δθi is zero. We obtain the achievable rate of uplink in Eq. (20).

Assume that the BS has perfect channel state information and the transmit power of the user is scaled with M and N according to pUE=EUE/(M+kMN2), where EUE is fixed and k=σ2LRS/σ2d, we have

In practice, the BS has to estimate the channel, and there exists estimation error as we discussed in Section III. For simplicity, we denote estimation error as E=hest−˜h. Referring to the Eq. (33) in [1], the elements of E are random variables with zero means and variances βpUEβ+1, where β=(1+kN2)σ2d. The received signal can be rewritten as

Similar to the Eq. (38) in [1], the achievable rate of uplink channel is given in Eq. (21), where each element of hHest is a random variable with zero mean and variance pUEβ2pUEβ+1.

Assume that the BS has imperfect channel state information and the transmit power of the user is scaled with M and N according to pUE=EUE/(√M(1+kN2)), where EUE is fixed and k=σ2LRS/σ2d, we have

The proof follows the similar procedures with Proposition 1. Substituting pUE=EUE/(√M(1+kN2)) into Eq. (21), and using the law of large number reviewed in Eqs. (16) and (18) along with the variances of elements of estimation error vector E and channel estimation vector hest, we obtain the convergence value of the achievable rate as M,N→∞ in Eq. (24).

In this paper, we study the LRS-assisted communication system by considering hardware impairments. In specific, we study the channel estimation performance as well as the power scaling law in both cases of perfect and imperfect channel state information. The result is encouraging for that we can use more low-cost reflecting elements instead of expensive antennas to achieve higher power scaling. There are other important issues that are not addressed, e.g., the estimation error increases with the increase of the number of reflecting elements, the estimation error of LRS channel is larger than that of direct channel. These problems cause the demand for more accurate estimation methods and more efficient communication protocols in future works.