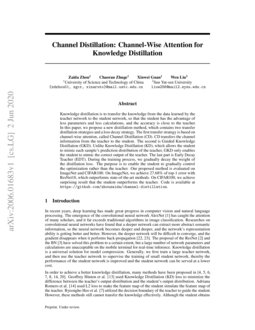 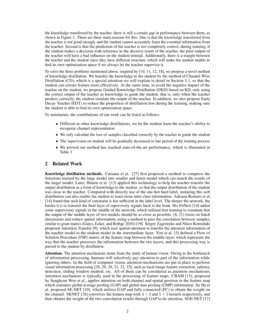 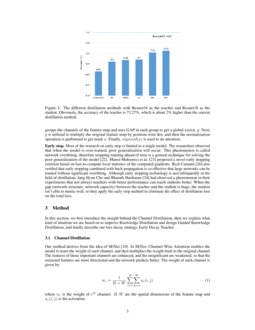 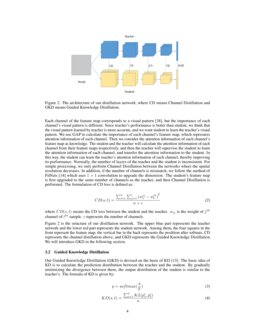 In recent years, deep learning has made great progress in computer vision and natural language processing. The emergence of the convolutional neural network AlexNet

ref1 has caught the attention of many scholars, and it far exceeds traditional algorithms in image classification. Researches on convolutional neural networks have found that a deeper network can extract more abstract semantic information, so the neural network becomes deeper and deeper, and the network’s representation ability is getting better and better. However, the deeper network will be difficult to converge, and the gradient disappears when it performs back-propagation ref22 ; ref23 . The proposal of the ResNet ref2 and the BN ref3 have solved this problem to a certain extent, but a large number of network parameters and calculations are unacceptable on the mobile terminal for real-time inference. Knowledge distillation is a universal solution for model compression. Generally, we first train a large teacher network, and then use the teacher network to supervise the training of small student network, thereby the performance of the student network is improved and the student network can be served at a lower cost.

To summarize, the contributions of our work can be listed as follows:

Knowledge distillation methods. Caruana et al. ref27 first proposed a method to compress the functions learned by the large model into smaller and faster model which can match the results of the larger model. Later, Hinton et al. ref13 applied this technology to help the teacher transfer the output distribution as a form of knowledge to the student, so that the output distribution of the student was close to the teacher. Compared with directly use of the one-hot hard label, imitating this soft distribution can also enable the student to learn more inter-class information. Adriana Romero et al. ref14 found that such kind of constraint is not sufficient at the label level. The deeper the network, the harder it is to transmit the final layer of supervisory signals back to the front. His FitNets ref14 added some supervisory signals in the middle of the network, which utilized hint training to constrain that the output of the middle layer of two models should be as close as possible. ref8 ; ref21 focus on batch dimensions and reduce spatial information, using a method to pass the correlation between samples, similar to gram matrix (Gatys, Ecker, and Bethge 2016) ref19 . Sergey Zagoruyko and Nikos Komodaki proposed Attention Transfer ref9 , which uses spatial-attention to transfer the attention information of the teacher model to the student model in the intermediate layer. Yim et al. ref5 defined a Flow of Solution Procedure (FSP) matrix of the feature map between the middle layer, which represents the way that the teacher processes the information between the two layers, and this processing way is passed to the student by distillation.

, such as local image feature extraction, saliency detection, sliding window method, etc. All of them can be considered as attention mechanisms. Attention mechanism is typically used in the processing of feature maps. CBAM

ref10 , which utilizes GAP and fully connected (FC) to obtain the weight on the channel. SKNET ref16 convolves the feature map with 3×3 and 5×5 kernels respectively, and then obtains the weight of the two convolution results through GAP to do attention. SGE-NET ref17

groups the channels of the feature map and uses GAP in each group to get a global vector,

g. Next, g is utilized to multiply the original feature map by position-wise dot, and then the normalization operation is performed to get mask a. Finally, sigmoid(a) is used to do attention.

Early stop. Most of the research on early stop is limited to a single model. The researchers observed that when the model is over-trained, poor generalization will occur. This phenomenon is called network overfitting, therefore stopping training ahead of time is a general technique for solving the poor generalization of the model ref22 . Maren Mahsereci et al. ref23 proposed a novel early stopping criterion based on fast-to-compute local statistics of the computed gradients. Rich Caruana ref26 also verified that early stopping combined with back-propagation is so effective that large networks can be trained without significant overfitting. Although early stopping technology is ued infrequently in the field of distillation, Jang Hyun Cho and Bharath Hariharan ref24 had observed a phenomenon in their experiments that not always teachers with better performance can teach students better. When the gap (network structure, network capacity) between the teacher and the student is huge, the student isn’t able to mimic well, so they apply the early stop method to eliminate the effect of distillation loss on the total loss.

Our method derives from the idea of SENet ref10 . In SENet, Channel-Wise Attention enables the model to learn the weight of each channel, and then multiplies the weight back to the original channel. The features of those important channels are enhanced, and the insignificant are weakened, so that the extracted features are more directional and the network predicts better. The weight of each channel is given by:

where wc is the weight of cth channel. H,W are the spatial dimensions of the feature map and uc(i,j) is the activation.

where CD(s,t) means the CD loss between the student and the teacher. wij is the weight of jth channel of ith sample. c represents the number of channels.

Our Guided Knowledge Distillation (GKD) is devised on the basis of KD ref13 . The basic idea of KD is to calculate the prediction distribution between the teacher and the student. By gradually minimizing the divergence between them, the output distribution of the student is similar to the teacher’s. The formula of KD is given by:

is probability distribution computed by logit,

a. And T is a temperature. Utilizing a higher value for T produces softer probability distribution over classes. n is the batch size. In addition, the KD(s,t)

is the mean of Kullback-Leibler divergence (KL) between

Although the teacher network is more accurate than the student, the teacher still has some prediction errors in a batch, so there will be a serious problem. When the teacher predicts incorrectly, the knowledge will also be transferred to the student, which will deteriorate the performance of the student. Therefore, we improved on the basis of KD to get GKD. Our intention is that the teacher only transfer the positive predition distribution to the student and directly ignore the negative. More specifically, our approach is to only backward the KD loss of those samples correctly predicted by the teacher network and ignore incorrectly. As shown in Figure 2. The formula of GKD is defined as follows:

where I is an indicator function and I(pit,yi) is 1 when the output of the teacher equals true label, or else I(pit,yi) is 0. For example, supposing a batch size has n samples and the teacher correctly predicts n1 samples, we only calculate the GKD loss of the n1 samples.

proposed that the impact of distillation is not always positive. In the early stage of network training, KD helps student train, but it will inhibit student learning better in the later, so at the appropriate time stopping the teacher’s supervision helps the student train. The experimental results show that at a certain epoch, the loss of cross-entropy will reversely rise. At this point, it will be better to stop the teacher’s supervision, but the practice of directly stopping the distillation is hard. Therefore, we propose a relatively soft approach. Our distillation loss weight decreases as the learning rate decreases. The formula is defined as follows:

where α is initial weight of distllation loss, and λ is a constant coefficient. ne denotes nth epoch in the entire training process, and n is an empirical value representing the number of epochs we reduce our weight of loss.

We only decrease the weight of CD loss. For the GKD loss, we don’t decrease its weight throughout the training process, because the GKD loss only teaches the correct knowledge from the teacher to the student.

In the end, the student network is then trained by optimizing the following loss function:

where CE is the cross entropy loss function commonly used in classification and y denotes the true label.

We validated our distillation method on CIFAR100 ref34 and ImageNet ref35 datasets. CIFAR100 contains 50,000 training images and 10,000 test images with 100 categories. ImageNet provides 1.2 million images from 1,000 classes for training and 50,000 images for validation.

First, we reproduced the results of distillation using cross-entropy loss and KD loss. Subsequently, we conducted an ablation study in Section 4.3 to validate the effectiveness of the CD loss, GKD loss, and EDT methods proposed in Sections 3.1, 3.2, and 3.3, respectively. Our teacher network and student network use ResNet family network. During CIFAR100 and ImageNet training, the teacher network is initialized with the pre-training weights on the training set.

For all experiments on ImageNet, we used stochastic gradient descent (SGD) optimizer with momentum 0.9 and weight decay 1e-4 for training. For the teacher network, we froze the parameters weight of all teacher layers. The input size is set to

. The initial learning rate is 0.1, divided by 10 at 30, 60 and 90 epochs. We set batch size to 256 and train for 100 epochs. We used a standard data augmentation scheme with crop and flip, and normalize the input images using the channel means and standard deviations.

When training on CIFAR100, the values of the training parameters are different. Since the image size of the CIFAR100 dataset is 32×32

, in order to make the ResNet network learn better features on low resolution images, we modified the first convolution layer parameters of ResNet from kernel_size = 7, stride = 2 and padding = 3 to kernel_size = 3, stride = 1 and padding = 1. Then we removed the max pooling layer after the first convolution layer. SGD optimizer are still used, but the weight decay is set to 5e-4 and batch size is set to 128. The initial learning rate is still 0.1, divided by 5 at 60, 120 and 160 epochs. The entire model is trained with 200 epochs. For CIFAR100 dataset, we used padding=4, flip and crop to augment input data, and normalized the input images with the channel means and standard deviations.

In this part, we conducted three ablation studies to validate the effectiveness of the CD loss, GKD loss, and EDT methods proposed in Sections 3.1, 3.2, and 3.3, respectively. On ImageNet dataset, we mainly use ResNet34 as the teacher network and ResNet18 as the student network. In Table 1, we report our experiment results on ImageNet.

It is easy to find that on a small-capacity dataset such as CIFAR100, our method is 1.73% higher than the KD loss. For the CIFAR100 dataset, ResNet152 has a large network capacity, so that ResNet152 network contains many useless parameters. In order to avoid teaching invalid knowledge to the student, our distillation method reduces the supervision of ResNet152 teacher in the later stages of training, and uses GKD losses only to teach correct knowledge to the student, which makes our ResNet50 student perform better than ResNet152 teacher.

We proposed Channel-Wise Attention for Knowledge Distillation: a novel form of knowledge distillation that aims to transfer the channel attention information from the teacher to the student, not just mimicking the teacher’s representation in label. Our experiments demonstrate the effectiveness of our proposed method compared with other knowledge distillation methods. We have also shown that our CD+GKD+EDT method achieves the state-of-the-art on ImageNet and suprising result on CIFAR100. The method we proposed can be used for model compression, which can significantly reduce the model calculation cost.