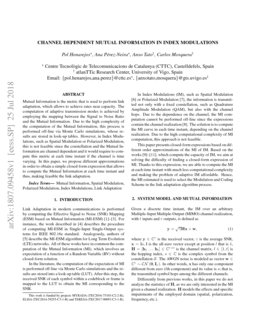 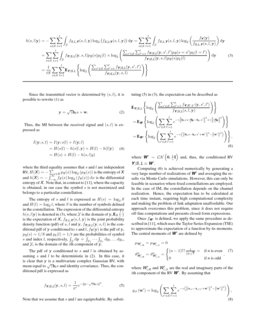 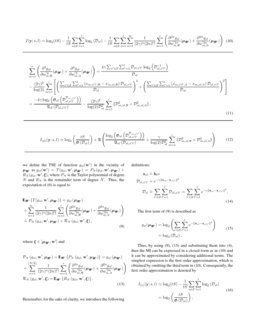 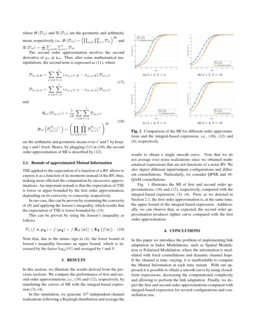 In this work, we analyse how to define a conditional version of Sibson's...
Amedeo Roberto Esposito, et al. ∙

The information leakage of a cryptographic implementation with a given d...
Olivier Rioul, et al. ∙

In this paper, we focus on the convex mutual information, which was foun...
Mingxi Yin, et al. ∙

Link Adaptation in modern communications is performed by computing the Effective Signal to Noise (SNR) Mapping (ESM) based on Mutual Information (MI-ESM) [Tao2011, Cheema2014, Hosseini2016]. For instance, the work described in [emd2008] describes the procedure of computing MI-ESM in Single-Input Single-Output systems for IEEE 802.16e standard. Analogously, authors of [Latif2012]

describe the MI-ESM algorithm for Long Term Evolution (LTE) networks. All of these works have in common the computation of the Mutual Information (MI), which involves an expectation of a function of a Random Variable (RV) without closed-form solution.

In the literature, the computation of the expectation of MI is performed off-line via Monte Carlo simulations and the results are stored into a look-up table (LUT). After this step, the received SNR of each symbol within a codeblock or frame is mapped to the LUT to obtain the MI corresponding to the SNR.

This paper presents closed-form expressions based on different order approximations of the MI of IM. Based on the works [Yang2008, Rajashekar2014, Henarejos2017]

, which compute the capacity of IM, we aim at solving the difficulty of finding a closed-form expression of MI. Thanks to this expression, we are able to compute the MI at each time instant with much less computational complexity and making the problem of adaptive IM affordable. Hence, the MI estimated is used to select the Modulation and Coding Scheme in the link adaptation algorithm process.

Given a discrete time instant, the IM over an arbitrary Multiple-Input Multiple-Output (MIMO) channel realization, with t inputs and r outputs, is defined as

is the received vector,

γ is the average SNR, x=ls, l is the all-zero vector except at position l that is 1, H=[h1…ht]∈Cr×t is the channel matrix, l∈[1,t] is the hopping index, s∈C is the complex symbol from the constellation S. The AWGN noise is modeled as vector w∈Cr∼CN(0,Ir). In other words, x has only one component different from zero (lth component) and its value is s; that is, the transmitted symbol hops among the different channels.

Differently from previous works, in this paper we do not analyze the statistics of H, as we are only interested in the MI given a channel realization. H models the effects and specific impairments of the employed domain (spatial, polarization, frequency, etc.).

Since the transmitted vector is determined by (s,l), it is possible to rewrite (1) as

Thus, the MI between the received signal and (s,l) is expressed as

The entropy of s and l is expressed as H(s)=log2S and H(l)=log2t, where S is the number of symbols defined in the constellation. The expression of the differential entropy h(s,l|y) is denoted in (3), where Y is the domain of y, IE\mathitsfX{⋅} is the expectation of \mathitsfX, f\mathitsfS,\mathitsfL,\mathitbfsfY(s,l,y)

is the joint probability density function (pdf) of

s, l and y, f\mathitbfsfY|\mathitsfS,\mathitsfL(y,s,l) is the conditional pdf of y conditioned to s and l, f\mathitbfsfY(y) is the pdf of y, p\mathitsfS(s)=1/S and p\mathitsfL(l)=1/t are the probabilities of symbol s and index l, respectively, , and Yi is the domain of the ith component of y.

The pdf of y conditioned to s and l is obtained by assuming s and l to be deterministic in (2). In this case, it is clear that y is a multivariate complex Gaussian RV, with mean equal to √γhls and identity covariance. Thus, the conditioned pdf is expressed as

Note that we assume that s and l are equiprobable. By substituting (5) in (3), the expectation can be described as

Computing (6) is achieved numerically by generating a very large number of realizations of \mathitbfsfW′ and averaging the results via Monte Carlo simulations. However, this can only be feasible in scenarios where fixed constellations are employed. In the case of IM, the constellation depends on the channel realization. Hence, the expectation has to be calculated at each time instant, requiring high computational complexity and making the problem of link adaptation unaffordable. Our approach overcomes this problem, since it does not require off-line computations and presents closed-form expressions.

Once f\mathitbfsfW′ is defined, we apply the same procedure as described in [Henarejos2017]

, which uses the Taylor Series Expansion (TSE) to approximate the expectation of a function by its moments. The central moments of

where \mathitsfW′i,R and \mathitsfW′i,I are the real and imaginary parts of the ith component of the RV \mathitbfsfW′. By assuming that

Hereinafter, for the sake of clarity, we introduce the following definitions:

The first term of (9) is described as

The second order approximation involves the second derivative of gsl at xsl. Thus, after some mathematical manipulations, the second term is expressed as (11), where

are the arithmetic and geometric means over

In our case, this can be proven by examining the convexity of (8) and applying the Jensen’s inequality, which results that the expectation of TSE is lower bounded by (15).

Note that, due to the minus sign in (4), the lower bound of Jensen’s inequality becomes an upper bound, which is increased by the factor log2(tS) and averaged by t and S.

In this section, we illustrate the results derived from the previous sections. We compare the performance of first and second order approximations, i.e., (16) and (12), respectively, by simulating the curves of MI with the integral-based expression (3), (4).

In this simulation, we generate 103 independent channel realizations following a Rayleigh distribution and average the results to obtain a single smooth curve. Note that we do not average over noise realizations since we obtained mathematical expressions that are not functions of a noise RV. We also depict different input/outputs configurations and different constellations. Particularly, we consider QPSK and 16-QAM constellations.

In this paper we introduce the problem of implementing link adaptation in Index Modulations, such as Spatial Modulation or Polarized Modulation, where the information is modulated with fixed constellations and dynamic channel hops. If the channel is time varying, it is unaffordable to compute the Mutual Information at each time instant. With our approach it is possible to obtain a smooth curve by using closed-form expressions, decreasing the computational complexity and allowing to perform the link adaptation. Finally, we depict the first and second order approximations compared with integral-based expression for several configurations and constellation size.