In this article, we use deep neural networks (DNNs) to develop a wireless end-to-end communication system, in which DNNs are employed for all signal-related functionalities, such as encoding, decoding, modulation, and equalization. However, accurate instantaneous channel transfer function, i.e., the channel state information (CSI), is necessary to compute the gradient of the DNN representing. In many communication systems, the channel transfer function is hard to obtain in advance and varies with time and location. In this article, this constraint is released by developing a channel agnostic end-to-end system that does not rely on any prior information about the channel. We use a conditional generative adversarial net (GAN) to represent the channel effects, where the encoded signal of the transmitter will serve as the conditioning information. In addition, in order to deal with the time-varying channel, the received signal corresponding to the pilot data can also be added as a part of the conditioning information. From the simulation results, the proposed method is effective on additive white Gaussian noise (AWGN) and Rayleigh fading channels, which opens a new door for building data-driven communication systems. 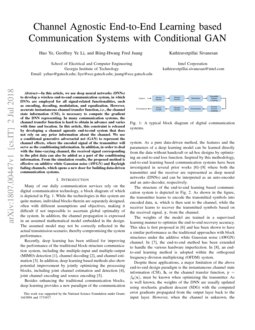 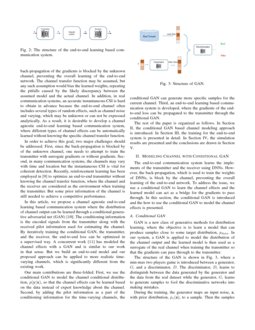 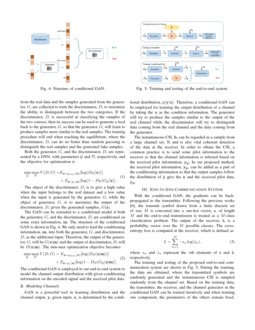 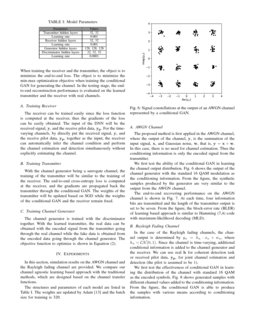 Many of our daily communication services rely on the digital communication technology, a block diagram of which is depicted in Fig. 1. While the technologies in this system are quite mature, individual blocks therein are separately designed, often with different assumptions and objectives, making it difficult if not impossible to ascertain global optimality of the system. In addition, the channel propagation is expressed in an assumed mathematical model embedded in the design. The assumed model may not be correctly reflected in the actual transmission scenario, thereby compromising the system performance.

Recently, deep learning has been utilized for improving the performance of the traditional block-structure communication system, including the multiple-input and multiple-output (MIMO) detection

[6, 7, 8, 9] where both the transmitter and the receiver are represented as deep neural networks (DNNs) and can be interpreted as an auto-encoder and an auto-decoder, respectively.

The weights of the model are trained in a supervised learning manner to optimize the end-to-end recovery accuracy. This idea is first proposed in

[6] and has been shown to have a similar performance as the traditional approaches with block structures under the additive white Gaussian noise (AWGN) channel. In [7], the end-to-end method has been extended to handle the various hardware imperfection. In [8], an end-to-end learning method is adopted within the orthogonal frequency-division multiplexing (OFDM) system.

Despite these applications, a major limitation of the above end-to-end design paradigm is the instantaneous channel state information (CSI), h, or the channel transfer function, y=fh(x)

, must be known when optimizing the transmitter. As is well known, the weights of the DNN are usually updated using stochastic gradient descent (SDG) with the computed error gradients propagated from the output layer back to the input layer. However, when the channel in unknown, the back-propagation of the gradients is blocked by the unknown channel, preventing the overall learning of the end-to-end network. The channel transfer function may be assumed, but any such assumption would bias the learned weights, repeating the pitfalls caused by the likely discrepancy between the assumed model and the actual channel. In addition, in real communication systems, an accurate instantaneous CSI is hard to obtain in advance because the end-to-end channel often includes several types of random effects, such as channel noise and varying, which may be unknown or can not be expressed analytically. As a result, it is desirable to develop a channel agnostic end-to-end learning based communication system, where different types of channel effects can be automatically learned without knowing the specific channel transfer function.

In order to achieve this goal, two major challenges should be addressed. First, since the back-propagation is blocked by of the unknown channel, one needs to attempt to train the transmitter with surrogate gradients or without gradients. Second, in many communication systems, the channels may vary with time and location but the instantaneous CSI is vital for coherent detection. Recently, reinforcement learning has been employed in

[9] to optimize an end-to-end transmitter without knowing the channel transfer function, where the channel and the receiver are considered as the environment when training the transmitter. But some prior information of the channel is still needed to achieve a competitive performance.

In this article, we propose a channel agnostic end-to-end learning based communication system where the distribution of channel output can be learned through a conditional generative adversarial net (GAN) [10]. The conditioning information is the encoded signals from the transmitter along with the received pilot information used for estimating the channel. By iteratively training the conditional GAN, the transmitter, and the receiver, the end-to-end loss can be optimized in a supervised way. A concurrent work [11] has modeled the channel effects with a GAN and is similar to our work in that sense. But we build an end-to-end model and our proposed approach can be applied to more realistic time-varying channels, which is significantly different from the existing work.

The rest of the paper is organized as follows. In Section II, the conditional GAN based channel modeling approach is introduced. In Section III, the training for the end-to-end system is presented in detail. In Section IV, the simulation results are presented and the conclusions are drawn in Section V.

GAN is a new class of generative methods for distribution learning, where the objective is to learn a model that can produce samples close to some target distribution, pdata. In our system, a GAN is applied to model the distribution of the channel output and the learned model is then used as a surrogate of the real channel when training the transmitter so that the gradients can pass through to the transmitter.

, is successful at classifying the samples of the two sources, then its success can be used to generate a feed back to the generator,

G, so that the generator, G, will learn to produce samples more similar to the real samples. The training procedure will end when reaching the equilibrium, where the discriminator, D, can do no better than random guessing to distinguish the real samples and the generated fake samples.

Both the generator, G, and the discriminator, D, are represented by a DNN, with parameters G and D, respectively, and the objective for optimization is

The conditional GAN is employed in our end-to-end system to model the channel output distribution with given conditioning information on the encoded signal and the received pilot data.

GAN is a powerful tool in learning distribution and the channel output, y, given input, x, is determined by the conditional distribution, p(y|x). Therefore, a conditional GAN can be employed for learning the output distribution of a channel by taking the x as the condition information. The generator will try to produce the samples similar to the output of the real channel while the discriminator will try to distinguish data coming from the real channel and the data coming from the generator.

With the conditional GAN, the gradients can be back-propagated to the transmitter. Following the previous works[6], the transmit symbol drawn from a finite discrete set of size M

is converted into a one-hot vector,

s, of length M and the end-to-end transmission is treated as a M-class classification problem. The output of the receiver, ^s

, is a probability vector over the

M possible classes. The cross-entropy loss is computed at the receiver, which is defined as

where sn and ^sn represent the nth elements of s and ^s, respectively.

The training and testing of the proposed end-to-end communication system are shown in Fig. 5. During the training, the data are obtained, where the transmitted symbols are randomly generated and the instantaneous CSI is sampled randomly from the channel set. Based on the training data, the transmitter, the receiver, and the channel generator in the conditional GAN can be trained iteratively and when training one component, the parameters of the others remain fixed. When training the receiver and the transmitter, the object is to minimize the end-to-end loss. The object is to minimize the min-max optimization objective when training the conditional GAN for generating the channel. In the testing stage, the end-to-end reconstruction performance is evaluated on the learned transmitter and the receiver with real channels.

The channel generator is trained with the discriminator together. With the learned transmitter, the real data can be obtained with the encoded signal from the transmitter going through the real channel while the fake data is obtained from the encoded data going through the channel generator. The objective function to optimize is shown in Equation (2).

In this section, simulation results on the AWGN channel and the Rayleigh fading channel are provided. We compare our channel agnostic learning based approach with the traditional methods, which are designed based on the channel transfer functions.

The structures and parameters of each model are listed in Table I. The weights are updated by Adam [13] and the batch size for training is 320.

The proposed method is first applied in the AWGN channel, where the output of the channel, y, is the summation of the input signal, x, and Gaussian noise, w, that is, y=x+w. In this case, there is no need for channel estimation. Thus the conditioning information is only the encoded signal from the transmitter.

We first test the ability of the conditional GAN in learning the channel output distribution. Fig. 6 shows the output of the channel generator with the standard 16 QAM modulation as the conditioning information. From the figure, the synthetic samples produced by the generator are very similar to the output from the AWGN channel.

The end-to-end recovering performance on the AWGN channel is shown in Fig. 7. At each time, four information bits are transmitted and the length of the transmitter output is set to be seven. From the figure, the block-error rate (BLER) of learning based approach is similar to Hamming (7,4) code with maximum-likelihood decoding (MLD).

In the case of the Rayleigh fading channels, the channel output is determined by yn=hn⋅xn+wn, where hn∼CN(0,1). Since the channel is time-varying, additional conditional information is added to the channel generator and the receiver. We can use real h for coherent detection task or received pilot data, yp, for joint channel estimation and detection (the pilot is assumed to be 1).

The end-to-end reconstruction results are shown in Fig. 9, where the learning based end-to-end approach shows a similar performance to the traditional methods in both tasks.

The end-to-end pipeline consists of DNNs for the transmitter, the channel generator, and the receiver. By iteratively training these networks, the end-to-end loss can be optimized in a supervised way. The simulation results confirm the effectiveness of the proposed method, by showing similar performance with traditional approaches based on expert knowledge and channel models.

Our method provides a new way for the end-to-end learning system. Although the simulation is only based on the AWGN and the Rayleigh fading channels, it can be easily extended to other channels, therefore opens a new door for building the pure data-driven communication systems.