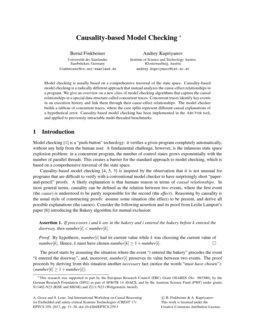 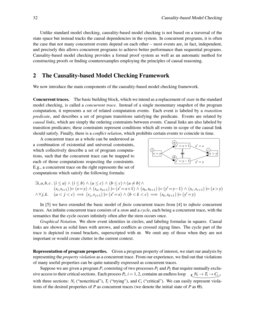 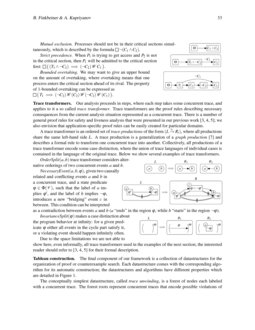 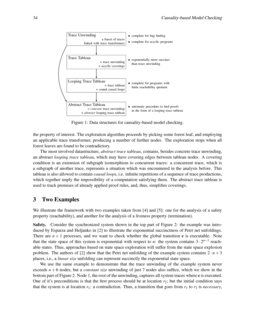 Model checking [2] is a “push-button” technology: it verifies a given program completely automatically, without any help from the human user. A fundamental challenge, however, is the infamous state space explosion problem: in a concurrent program, the number of control states grows exponentially with the number of parallel threads. This creates a barrier for the standard approach to model checking, which is based on a comprehensive traversal of the state space.

Causality-based model checking [5, 6, 4] is inspired by the observation that it is not unusual for programs that are difficult to verify with a conventional model checker to have surprisingly short “paper-and-pencil” proofs. A likely explanation is that humans reason in terms of causal relationships. In most general terms, causality can be defined as the relation between two events, where the first event (the cause) is understood to be partly responsible for the second (the effect). Reasoning by causality is the usual style of constructing proofs: assume some situation (the effect) to be present, and derive all possible explanations (the causes). Consider the following assertion and its proof from Leslie Lamport’s paper [7] introducing the Bakery algorithm for mutual exclusion:

By hypothesis, number[i] had its current value while k was choosing the current value of number[k]. Hence, k must have chosen number[k]≥1+number[i]. ∎

The proof starts by assuming the situation where the event “i entered the bakery” precedes the event “k entered the doorway”, and, moreover, number[i] preserves its value between two events. The proof proceeds by deriving from this situation another necessary fact (notice the words “must have chosen”): (number[k]≥1+number[i]).

Unlike standard model checking, causality-based model checking is not based on a traversal of the state space but instead tracks the causal dependencies in the system. In concurrent programs, it is often the case that not many concurrent events depend on each other – most events are, in fact, independent, and precisely this allows concurrent programs to achieve better performance than sequential programs. Causality-based model checking provides a formal proof system as well as an automatic method for constructing proofs or finding counterexamples employing the principles of causal reasoning.

We now introduce the main components of the causality-based model checking framework.

The basic building block, which we intend as a replacement of state in the standard model checking, is called a concurrent trace. Instead of a single momentary snapshot of the program computation, it represents a set of related computation events. Each event is labeled by a transition predicate, and describes a set of program transitions satisfying the predicate. Events are related by causal links, which are simply the ordering constraints between events. Causal links are also labeled by transition predicates; these constraints represent conditions which all events in scope of the causal link should satisfy. Finally, there is a conflict relation, which prohibits certain events to coincide in time.

Graphical Notation. We show event identities in circles, and labeling formulas in squares. Causal links are shown as solid lines with arrows, and conflicts as crossed zigzag lines. The cycle part of the trace is depicted in round brackets, superscripted with ω. We omit any of those when they are not important or would create clutter in the current context.

Given a program property of interest, we start our analysis by representing the property violation as a concurrent trace. From our experience, we find out that violations of many useful properties can be quite naturally expressed as concurrent traces.

Suppose we are given a program P, consisting of two processes P_1 and P_2 that require mutually exclusive access to their critical sections. Each process P_i, i=1,2, contains an endless loop with three sections: N_i (“noncritical”), T_i (“trying”), and C_i (“critical”). We can easily represent violations of the desired properties of P as concurrent traces (we denote the initial state of P as Θ).

Mutual exclusion. Processes should not be in their critical sections simultaneously, which is described by the formula \LTLsquare¬(C_1∧C_2).

Our analysis proceeds in steps, where each step takes some concurrent trace, and applies to it a so called trace transformer. Trace transformers are the proof rules describing necessary consequences from the current analysis situation represented as a concurrent trace. There is a number of general proof rules for safety and liveness analysis that were presented in our previous work [4, 5, 6]; we also envision that application-specific proof rules can be easily created for particular domains.

OrderSplit(a,b) trace transformer considers alternative orderings of two concurrent events a and b.

NecessaryEvent(a,b,φ), given two causally related and conflicting events a and b in a concurrent trace, and a state predicate φ∈Φ(V), such that the label of a implies φ′, and the label of b implies ¬φ, introduces a new “bridging” event c in between. This condition can be interpreted as a contradiction between events a and b (a “ends” in the region φ, while b “starts” in the region ¬φ).

InvarianceSplit(φ) makes a case distinction about the program behavior at infinity: for a given predicate φ either all events in the cycle part satisfy it, or a violating event should happen infinitely often.

Due to the space limitations we are not able to show here, even informally, all trace transformers used in the examples of the next section; the interested reader should refer to [4, 5, 6] for their formal description.

The final component of our framework is a collection of datastructures for the organization of proof or counterexample search. Each datastructure comes with the corresponding algorithm for its automatic construction; the datastructures and algortihms have different properties which are detailed in Figure 1.

The conceptually simplest datastructure, called trace unwinding, is a forest of nodes each labeled with a concurrent trace. The forest roots represent concurrent traces that encode possible violations of the property of interest. The exploration algorithm proceeds by picking some forest leaf, and employing an applicable trace transformer, producing a number of further nodes. The exploration stops when all forest leaves are found to be contradictory.

The most involved datastructure, abstract trace tableau, contains, besides concrete trace unwinding, an abstract looping trace tableau, which may have covering edges between tableau nodes. A covering condition is an extension of subgraph isomorphism to concurrent traces: a concurrent trace, which is a subgraph of another trace, represents a situation which was encountered in the analysis before. This tableau is also allowed to contain causal loops, i.e. infinite repetitions of a sequence of trace productions, which together imply the impossibility of a computation satisfying them. The abstract trace tableau is used to track premises of already applied proof rules, and, thus, simplifies coverings.

Consider the synchronized system shown in the top part of Figure 2: the example was introduced by Esparza and Heljanko in [3] to illustrate the exponential succinctness of Petri net unfoldings. There are n+1 processes, and we want to check whether the global transition c is executable. Note that the state space of this system is exponential with respect to n: the system contains 3⋅2n−1 reachable states. Thus, approaches based on state space exploration will suffer from the state space explosion problem. The authors of [3] show that the Petri net unfolding of the example system contains 2⋅n+3 places, i.e., a linear size unfolding can represent succinctly the exponential state space.

We use the same example to demonstrate that the trace unwinding of the example system never exceeds n+6 nodes, but a constant size unwinding of just 7 nodes also suffice, which we show in the bottom part of Figure 2. Node 1, the root of the unwinding, captures all system traces where c is executed. One of it’s preconditions is that the first process should be at location r_2; but the initial condition says that the system is at location r_1: a contradiction. Thus, a transition that goes from r_1 to r_2 is necessary, and we insert the only such transition, a, into the trace of node 2. Formally, this is done by applying the trace transformer LastNecessaryEvent, this is where the link label r_2∧r_2′ comes from: it enforces to select the last transition that goes into location r_2. By a similar reasoning we conclude that transition b_1 is also necessary, and include it into the trace of node 3. Notice that these events occur concurrently, i.e. no specific order between them is specified till now.

In the next iteration, when we try to put them in some linear order, we find out that these transitions contradict each other: a goes to location s_4, b_1 goes to location s_2, but both can start only at location s_1. Therefore, we perform a case split between two possible linearizations using the transformer OrderSplit, and obtain the traces of nodes 4 and 5. In node 4 the contradiction between now linearly ordered transitions a and b_1 is enforced by the trace, and we again apply the transformer LastNecessaryEvent. It inserts an event between transitions a and b_1 which needs to change the location from s_4 (the postcondition of a) to s_1 (the precondition of b_1

). Formally, this requirement is captured by the Craig interpolant between between the post- and pre-conditions of

The unwinding of Figure 2 has constant size, independent on the number of processes in the example system. In the worst case it could have linear size: for that to happen, the other necessary transitions b_2 through b_n would have to be introduced into concurrent before transitions a and b_1

are introduced. In fact, a simple heuristic is able to select transitions

a and b_1 first, and it will always produce the trace unwinding of constant size.

Consider the Producer-Consumer example presented in Figure 3, which is a simplified model of the Map-Reduce architecture from distributed processing: producers model the mapping step for separate data sources, consumers model the reducing step for different types of input data. The natural requirement for this architecture is that the processing terminates for any finite amount of input data.

Our analysis starts with the assumption (by way of contradiction) that there exists some infinite computation. The assumption is expressed as the concurrent trace of node 1 in Figure 4: infinitely often some transition should occur. The transition is so far unknown, and therefore characterized by the predicate ⊤. Our argument proceeds by instantiating this unknown transition with the transitions of the program, resulting in one new trace per transition.

Next, we try all possible instantiations of the event characterized by the predicate (q_1′>q_1): there are two transitions that satisfy the predicate, namely a_2 and b_2. We explore the instantiation with a_2 in the trace of node 8, and see that transitions a_1 and a_4 should occur infinitely often (node 9). At this point, we realize that the trace of node 9 contains as a subgraph the trace of node 2, namely the transition a_1. We cover node 9 with node 2, and avoid repeating the analysis done for nodes 2–4. The remaining tableau branches are analyzed similarly. The resulting tableau for the case of two producers and two consumers will have the shape shown in the bottom left part of Figure 4. It can be interpreted as a partially ordered ranking function, which shows that all threads satisfying the function components p_1 and p_2 terminate unconditionally, while the threads that satisfy the function components q_1 and q_2 terminate under the condition that both of the previous components terminate. Notice also that the tableau is of quadratic size with respect to the number of threads.

Causality-based model checking has significant advantages over standard state-based model checking. As illustrated by the two examples, the complexity of the verification problem can be substantially lower; in particular, the complexity of verifying multi-threaded programs with locks reduces from exponential to polynomial (see [5], Theorem 4). The efficiency of causality-based model checking is also reflected in the experimental results obtained with our tool implementation Arctor (cf. [6]). In our experience, Arctor scales to many, even hundreds, of parallel threads in benchmarks where other tools can only handle a small number of parallel threads or no parallelism at all: see Table 1 for experimental results obtained with Arctor on the Producer-Consumer example.