The concept of causality has a controversial history. The question of whether it is possible to represent and address causal problems with probability theory, or if fundamentally new mathematics such as the do-calculus is required has been hotly debated, In this paper we demonstrate that, while it is critical to explicitly model our assumptions on the impact of intervening in a system, provided we do so, estimating causal effects can be done entirely within the standard Bayesian paradigm. The invariance assumptions underlying causal graphical models can be encoded in ordinary Probabilistic graphical models, allowing causal estimation with Bayesian statistics, equivalent to the do-calculus. 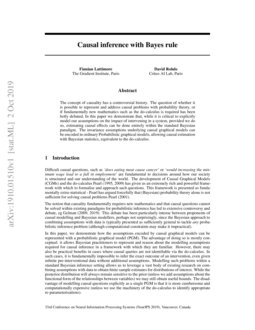 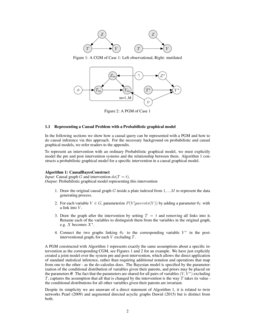 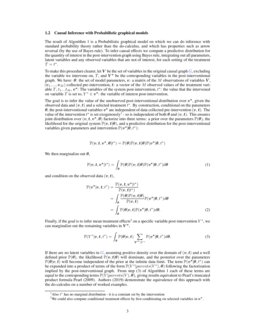 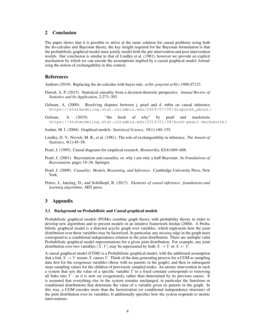 Replacing the do-calculus with Bayes rule

The concept of causality has a controversial history. The question of wh...
Finnian Lattimore, et al. ∙

A Bayesian Solution to the M-Bias Problem

A Probabilistic Calculus of Actions

We present a symbolic machinery that admits both probabilistic and causa...
Judea Pearl, et al. ∙

We address the problem of estimating the effect of intervening on a set ...
Elias Bareinboim, et al. ∙

Difficult causal questions, such as ‘does eating meat cause cancer’ or ‘would increasing the minimum wage lead to a fall in employment’ are fundamental to decisions around how our society is structured and our understanding of the world. The development of Causal Graphical Models (CGMs) and the do-calculus Pearl (1995, 2009)

has given us an extremely rich and powerful framework with which to formalise and approach such questions. This framework is presented as fundamentally extra-statistical - Pearl has argued forcefully that (Bayesian) probability theory alone is not sufficient for solving causal problems

The notion that causality fundamentally requires new mathematics and that causal questions cannot be solved within existing paradigms for probabilistic inference has led to extensive controversy and debate, eg Gelman (2009, 2019). This debate has been particularly intense between proponents of causal modelling and Bayesian modellers, perhaps not surprisingly, since the Bayesian approach to combining assumptions with data is typically presented as sufficiently general to tackle any probabilistic inference problem (although computational constraints may make it impractical).

In this paper, we demonstrate how the assumptions encoded by causal graphical models can be represented with a probabilistic graphical model (PGM). The advantage of doing so is mostly conceptual: it allows Bayesian practitioners to represent and reason about the modelling assumptions required for causal inference in a framework with which they are familiar. However, there may also be practical benefits in cases where causal queries are not identifiable via the do-calculus. In such cases, it is fundamentally impossible to infer the exact outcome of an intervention, even given infinite pre-interventional data without additional assumptions. Modelling such problems within a standard Bayesian inference setting allows us to leverage a vast body of existing research on combining assumptions with data to obtain finite sample estimates for distributions of interest. While the posterior distribution will always remain sensitive to the prior (unless we add assumptions about the functional form of the relationships between variables) we may still obtain useful bounds. The disadvantage of modelling causal questions explicitly as a single PGM is that it is more cumbersome and computationally expensive (unless we use the machinery of the do-calculus to identify appropriate re-parameterisations).

1.1 Representing a Causal Problem with a Probabilistic graphical model

In the following sections we show how a causal query can be represented with a PGM and how to do causal inference via this approach. For the necessary background on probabilistic and causal graphical models, we refer readers to the appendix.

A PGM constructed with Algorithm 1 represents exactly the same assumptions about a specific intervention as the corresponding CGM, see Figures 1 and 2 for an example. We have just explicitly created a joint model over the system pre and post-intervention, which allows the direct application of standard statistical inference, rather than requiring additional notation and operations that map from one to the other - as the do-calculus does. The Bayesian model is specified by the parameterization of the conditional distribution of variables given their parents, and priors may be placed on the parameters θ. The fact that the parameters are shared for all pairs of variables (V,V∗) excluding T, captures the assumption that all that is changed by the intervention is the way T takes its value - the conditional distributions for all other variables given their parents are invariant.

Despite its simplicity we are unaware of a direct statement of Algorithm 1, it is related to twin networks Pearl (2009) and augmented directed acyclic graphs Dawid (2015) but is distinct from both.

The result of Algorithm 1 is a Probabilistic graphical model on which we can do inference with standard probability theory rather than the do-calculus, and which has properties such as arrow reversal (by the use of Bayes rule). To infer causal effects we compute a predictive distribution for the quantity of interest in the post-intervention graph using Bayes rule, integrating out all parameters, latent variables and any observed variables that are not of interest, for each setting of the treatment T=t∗.

: a vector of the

. This ensures joint distribution over

(v,t,v∗,θ) factorize into three terms: a prior over the parameters P(θ), the likelihood for the original system P(v,t|θ), and a predictive distribution for the post-interventional variables given parameters and intervention P(v∗|θ,t∗):

We then marginalize out θ,

and condition on the observed data (v,t),

If there are no latent variables in \definecolor[named]pgfstrokecolorrgb0.08984375,0.28515625,0.703125\pgfsys@color@rgb@stroke0.089843750.285156250.703125\pgfsys@color@rgb@fill0.089843750.285156250.703125G, assuming positive density over the domain of (v,t) and a well defined prior P(θ), the likelihood P(v,t|θ) will dominate, and the posterior over the parameters P(θ|v,t) will become independent of the prior at the infinite data limit. The term P(v∗|θ,t∗) can be expanded into a product of terms of the form P(V∗|parents(V∗),θ) following the factorization implied by the post-interventional graph. From step (3) of Algorithm 1 each of these terms are equal to the corresponding terms P(V|parents(V),θ), giving results equivalent to Pearl’s truncated product formula Pearl (2009). Authors (2019) demonstrate the equivalence of this approach with the do-calculus on a number of worked examples.

The paper shows that it is possible to arrive at the same solution for causal problems using both the do-calculus and Bayesian theory, the key insight required for the Bayesian formulation is that the probabilistic graphical model must jointly model both the pre-intervention and post intervention worlds. Our conclusion is similar to that of Lindley et al. (1981), however we provide an explicit mechanism by which we can encode the assumptions implied by a causal graphical model, formalising the notion of exchangability in this context.

A causal graphical model (CGM) is a Probabilistic graphical model, with the additional assumption that a link X→Y means X causes Y. Think of the data generating process for a CGM as sampling data first for the exogenous variables (those with no parents in the graph), and then in subsequent steps sampling values for the children of previously sampled nodes. An atomic intervention in such a system that sets the value of a specific variable T to a fixed constant corresponds to removing all links into T - as it is now set exogenously, rather than determined by its previous causes. It is assumed that everything else in the system remains unchanged, in particular the functions or conditional distributions that determine the value of a variable given its parents in the graph. In this way, a CGM encodes more than the factorization (or conditional independence structure) of the joint distribution over its variables; It additionally specifies how the system responds to atomic interventions.

Here we present the do-calculus in a simplified form that applies to interventions on single variables Pearl (1995, 2009); Peters et al. (2017).