Recently, Point of interest (POI) recommendation has gained ever-increasing importance in various Location-Based Social Networks (LBSNs). With the recent advances of neural models, much work has sought to leverage neural networks to learn neural embeddings in a pre-training phase that achieve an improved representation of POIs and consequently a better recommendation. However, previous studies fail to capture crucial information about POIs such as categorical information. In this paper, we propose a novel neural model that generates a POI embedding incorporating sequential and categorical information from POIs. Our model consists of a check-in module and a category module. The check-in module captures the geographical influence of POIs derived from the sequence of users' check-ins, while the category module captures the characteristics of POIs derived from the category information. To validate the efficacy of the model, we experimented with two large-scale LBSN datasets. Our experimental results demonstrate that our approach significantly outperforms state-of-the-art POI recommendation methods. 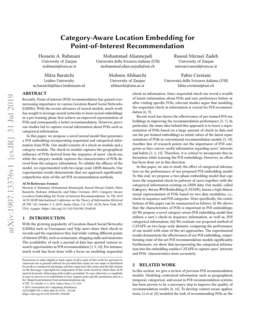 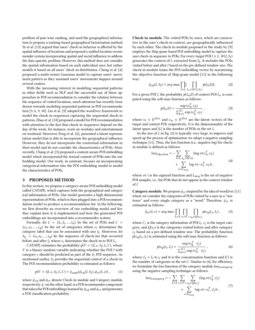 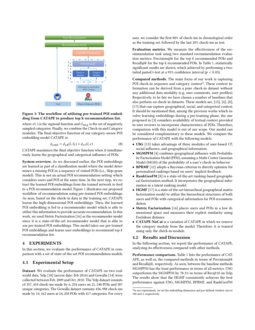 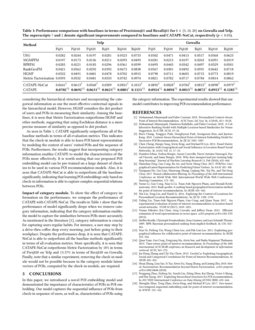 DAN-SNR: A Deep Attentive Network for Social-Aware Next Point-of-Interest Recommendation

Where to Go Next: A Spatio-temporal LSTM model for Next POI Recommendation

Next Point-of-Interest (POI) recommendation is of great value for both l...
Pengpeng Zhao, et al. ∙

A Survey on Deep Learning Based Point-Of-Interest (POI) Recommendations

With the growing popularity of Location-Based Social Networks (LBSNs) such as Foursquare and Yelp users share their check-in records and the experiences they had while visiting different points of interest (POIs), such as restaurants, shopping malls and museums. The availability of such a myriad of data has opened various research opportunities in POI recommendation (Liu et al., 2016; Aliannejadi and Crestani, 2018; Liu et al., 2017). For instance, much work has been done with a focus on modeling sequential check-in information. Since sequential check-ins reveal a wealth of latent information about POIs and user preferences before or after visiting specific POIs, relevant studies argue that modeling the sequential check-in information is crucial for POI recommendation (Liu et al., 2016; Feng et al., 2017).

Recent work has shown the effectiveness of pre-trained POI embeddings in improving the recommendation performance (Erhan et al., 2010; He et al., 2017). In particular, the main idea behind this approach is to learn a representation of POIs based on a large amount of check-in data and use the pre-trained embeddings as initial values of the latent representations of POIs in conventional recommendation models (Chang et al., 2018; Zhao et al., 2017b). Another line of research points out the importance of POI categories as they convey useful information regarding users’ interests and habits (Aliannejadi and Crestani, 2018; Zhang and Chow, 2015; Aliannejadi et al., 2018). Therefore, it is critical to incorporate this information while learning the POI embeddings. However, no effort has been done yet in this direction.

In this paper, we aim to study the effect of categorical information on the performance of our proposed POI embedding model. To this end, we propose a two-phase embedding model that captures the sequential check-in patterns of users together with the categorical information existing on LBSN data. Our model, called Category-Aware POI Embedding (CATAPE), learns a high dimensional representation of POIs based on two data modalities, i.e., check-in sequence and POI categories. More specifically, the contributions of this paper can be summarized as follows:

We shows that the characteristics of POIs is important in POI embeddings;

We evaluate our proposed method of CATAPE on two large-scale datasets, comparing the performance of our model with state-of-the-art approaches. The experimental results demonstrate the effectiveness of our POI embedding, outperforming state-of-the-art POI recommendation models significantly. Furthermore, we show that incorporating the categorical information into the embedding enables CATAPE to capture users’ interests and POIs’ characteristics more accurately.

In this section, we give a review of previous POI recommendation models. Modeling contextual information such as geographical, temporal, categorical, and social in POI recommendation systems has been proven to be a necessary step to improve the quality of recommendation results (Cheng et al., 2012; Yuan et al., 2013). To develop context-aware applications, Li et al. (2015) modeled the task of recommending POIs as the problem of pair-wise ranking, and used the geographical information to propose a ranking-based geographical factorization method. Ye et al. (2011) argued that users’ check-in behavior is affected by the spatial influence of locations and proposed a unified location recommender system incorporating spatial and social influence to address the data sparsity problem. However, this method does not consider the spatial information based on each individual user, but rather models it based on all users’ check-in distribution. Cheng et al. (2012) proposed a multi-center Gaussian model to capture users’ movement pattern as they assumed users’ movements happen around several centers.

With the increasing interest in modeling sequential patterns in other fields such as NLP and the successful use of these approaches in POI recommendation to consider the relation between the sequence of visited locations, much attention has recently been drawn towards modeling sequential patterns in POI recommendation (Liu et al., 2016; Chang et al., 2018; Feng et al., 2017; Zhao et al., 2017b). Liu et al. (2016) adopted the word2vec framework to model the check-in sequences capturing the sequential check-in patterns. Zhao et al. (2017b) proposed a model for POI recommendation with attention to the fact that check-in sequences depend on the day of the week, for instance, work on weekday and entertainment on weekend. Moreover, Feng et al. (2017), presented a latent representation model that is able to incorporate the geographical influence. However, they do not incorporate the contextual information in their model and do not consider the characteristics of POIs. More recently, Chang et al. (2018) proposed a content-aware POI embedding model which incorporated the textual content of POIs into the embedding model. Our work, in contrast, focuses on incorporating categorical information into the POI embedding model to model the characteristics of POIs.

In this section, we propose a category-aware POI embedding model called CATAPE, which captures both the geographical and categorical information of POIs. Our model generates a high dimensional representation of POIs, which is then plugged into a POI recommendation model to produce a recommendation list. In the following, we first describe an overview of our embedding model and further explain how it is implemented and how the generated POI embeddings are incorporated into a recommender system.

is a binary random variable indicating whether the POI

l with category c should be predicted as part of the Sl POI sequence. As mentioned earlier, Sl provides the sequential context of a check-in. The POI recommendation probability is estimated as follows:

where ϕch and ϕct denote Check-in module and Category module, respectively. ψ, on the other hand, is a POI recommender component that takes the POI embeddings learned by ϕch and ϕct and generates a POI classification probability.

Check-in module. The visited POIs by users, which are consecutive in the user’s check-in context, are geographically influenced by each other. The check-in module proposed in the study by (Liu et al., 2016) employs the Skip-gram based POI embedding model to capture the user check-in sequence to POIs. For every target POI l∈L, W(l,Sl) generates the context of l, extracted from Sl. It includes the POIs visited before and after l

based on the pre-defined window size. The check-in module trains the POI embedding vector by maximizing the objective function of Skip-gram model

For a given POI l, the probability p(lw|l) of context POI lw is computed using the soft-max function as follows:

where vl∈RD×1 and vw∈RD×1 are the latent vectors of the target and context POI, respectively. D is the dimensionality of the latent space and |L| is the number of POIs in the set L.

As the size of L in Eq. (2) is typically very large, to improve and speed up the process of optimization we adopt a negative sampling technique (Mikolov et al., 2013)

is the sigmoid function and

Lneg is the set of negative POI samples, i.e., the POIs that do not appear in the context window of l.

Category module. We propose ψct inspired by the idea of word2vec (Mikolov et al., 2013) where we consider the categories of POIs visited by a user as a “sentence” and every single category as a “word.” Therefore, ψct is estimated as follows:

where Ci is the category information of POI li, cj is the target category, and Q(cj) is the categories visited before and after category cj based on a pre-defined window size. The probability function p(cq|cj,li) is estimated using the soft-max function as follows:

where ^vj=li⊕cj and ⊕ is the concatenation function and |C| is the number of categories in the set C. Similar to (4), for efficiency, we formulate the loss function of the category module losscategory using the negative sampling technique as follows:

where σ(⋅) is the sigmoid function and Gneg is the set of negatively sampled categories. Finally, we combine the Check-in and Category modules. The final objective function of our category-aware POI embedding model CATAPE is:

CATAPE maximizes the final objective function when it simultaneously learns the geographical and categorical influence of POIs.

In this section, we evaluate the performance of CATAPE in comparison with a set of state-of-the-art POI recommendation models.

, statistically significant results are shown, which achieved by performing a two-tailed paired t-test at a

Compared methods. The main focus of our work is capturing POI check-in sequence and category context111In our experiments, we set the embedding dimension and pre-defined window size to 100 and 4, respectively.. These context information can be derived from a pure check-in dataset without any additional data modality (e.g, user comments, user profiles). Respectively, to be fair we have chosen a number of baselines that also perform on check-in datasets. These models are, (Ye et al., 2011), (Cheng et al., 2012), (Li et al., 2015), (Zhao et al., 2017a) that can capture geographical, social, and categorical context. It should be mentioned that, among the previous works which involve learning embeddings during a pre-training phase, the one proposed in (Chang et al., 2018) considers availability of textual context provided in user reviews to incorporate characteristics of POIs. Therefore, comparison with this model is out of our scope. Our model can be considered complementary to these models. We compare the performance of CATAPE with the following models:

In the following section, we report the performance of CATAPE, analyzing its effectiveness compared with other methods.

Performance comparison. Table 1 lists the performance of CATAPE, as well as, the compared methods in terms of Precision@k and Recall@k, respectively. As seen, between the baseline methods MGMPFM has the least performance in terms of all metrics. USG outperforms the MGMPFM by 78.5% in terms of Rec@10 on Yelp. The results show that the HGMF consistently achieves the best performance against USG, MGMPFM, BPRMF, and RankGeoFM considering the hierarchical structure and incorporating the categorical information as one the most effective contextual signals in the hierarchical model. However, HGMF considers the dot product of users and POIs in measuring their similarity. Among the baselines, it is seen that Metric Factorization outperforms HGMF and other methods, suggesting that using Euclidean distance is a more precise measure of similarity as opposed to dot product.

As seen in Table 1, CATAPE significantly outperforms all of the baseline methods in terms of all evaluation metrics. This indicates that the check-in module is able to learn POI latent representation by modeling the context of users’ visited POIs and the sequence of POIs. Furthermore, the results suggest that incorporating category information enables CATAPE to model the characteristics of the POIs more effectively. It is worth noting that our proposed POI embedding model can be pre-trained on a large dataset of check-ins to be used in various POI recommendation models. Also, it is seen that CATAPE-NoCat is able to outperform all the baselines significantly, indicating that learning POI embeddings only based on check-in information is able to capture complex sequential relations between POIs.

In this paper, we introduced a novel POI embedding model and demonstrated the importance of characteristics of POIs in POI embedding. Our model captures the sequential influence of POIs from check-in sequence of users, as well as, characteristics of POIs using the category information. The experimental results showed that our model contributes to improving POI recommendation performance.