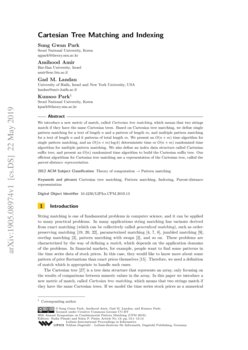 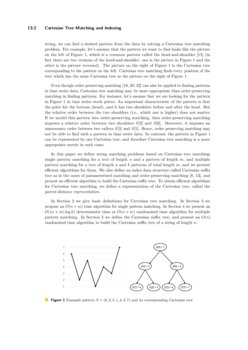 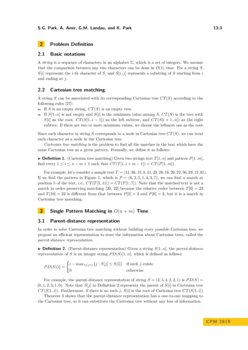 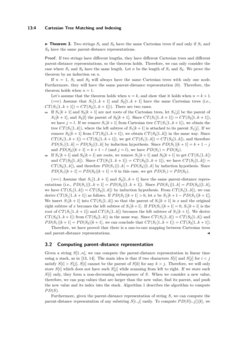 Given a text and a pattern over an alphabet, the pattern matching proble...
Davaajav Jargalsaikhan, et al. ∙

Flexible and Efficient Algorithms for Abelian Matching in Strings

String matching is one of fundamental problems in computer science, and it can be applied to many practical problems. In many applications string matching has variants derived from exact matching (which can be collectively called generalized matching), such as order-preserving matching [19, 20, 22], parameterized matching [4, 7, 8], jumbled matching [9], overlap matching [3], pattern matching with swaps [2], and so on. These problems are characterized by the way of defining a match, which depends on the application domains of the problems. In financial markets, for example, people want to find some patterns in the time series data of stock prices. In this case, they would like to know more about some pattern of price fluctuations than exact prices themselves [15]. Therefore, we need a definition of match which is appropriate to handle such cases.

A string is a sequence of characters in an alphabet Σ, which is a set of integers. We assume that the comparison between any two characters can be done in O(1) time. For a string S, S[i] represents the i-th character of S, and S[i..j] represents a substring of S starting from i and ending at j.

A string S can be associated with its corresponding Cartesian tree CT(S) according to the following rules [27]:

Cartesian tree matching is the problem to find all the matches in the text which have the same Cartesian tree as a given pattern. Formally, we define it as follows:

If two strings have different lengths, they have different Cartesian trees and different parent-distance representations, so the theorem holds. Therefore, we can only consider the case where S1 and S2 have the same length. Let n be the length of S1 and S2. We prove the theorem by an induction on n.

If n=1, S1 and S2 will always have the same Cartesian trees with only one node. Furthermore, they will have the same parent-distance representation (0). Therefore, the theorem holds when n=1.

Therefore, we have proved that there is a one-to-one mapping between Cartesian trees and parent-distance representations. ∎

Given a string S[1..n], we can compute the parent-distance representation in linear time using a stack, as in [13, 14]. The main idea is that if two characters S[i] and S[j] for i<j satisfy S[i]>S[j], S[i] cannot be the parent of S[k] for any k>j. Therefore, we will only store S[i] which does not have such S[j] while scanning from left to right. If we store such S[i] only, they form a non-decreasing subsequence of S. When we consider a new value, therefore, we can pop values that are larger than the new value, find its parent, and push the new value and its index into the stack. Algorithm 1 describes the algorithm to compute PD(S).

We can define a failure function similar to the one used in the KMP algorithm [21].

In order to perform a text search using O(m) space, we compute the parent-distance representation of the text online as we read the text, so that we don’t need to store the parent-distance representation of the whole text, which would cost O(n) space. Furthermore, among the text characters which are matched with the pattern, we only have to store elements that form a non-decreasing subsequence by using a deque (instead of a stack in Section 3.2) in order to delete elements in front. Using this idea, we can keep the size of the deque to be always smaller than or equal to m. Therefore, we can perform the text search using O(m) space. Algorithm 2 shows the text search algorithm of Cartesian tree matching. In line 9 we need to compute x=PD(T[i−len..i])[len+1]. If the deque is empty, then x=0. Otherwise, let (value,index) be the element at the back of the deque. Then x=i−index. This computation takes constant time. Just before line 14, we do not compare PD(T[i]) and PD(P)[1] when len=0, because they always match. Therefore, we can safely perform line 14.

While computing the failure function, we can also compute the output function in the same way as the Aho-Corasick algorithm. The output function of node qi is the set of patterns which match some suffix of si. This function is used to output all possible matches at the node.

Using the automaton defined above, we can solve multiple pattern Cartesian tree matching in O(nlogk) time. The text search algorithm is essentially the same as that of the Aho-Corasick algorithm, following the trie and using the failure links in case of any mismatches. As in the single pattern case, we compute the parent-distance representation of the text online in the same way as Algorithm 2 (using a deque) to ensure O(m) space. The time complexity of our multiple pattern Cartesian tree matching is O((n+m)logk) using O(m) space, where the logk factor is included due to the binary search tree in each node. Since there can be at most k outgoing edges from each node, we can perform an operation in the binary search tree in O(logk) time. Combined with the time-complexity analysis of the Aho-Corasick algorithm, this shows that our algorithm has the time complexity of O((n+m)logk). We can reduce the time complexity further to randomized O(n+m) time by using a hash instead of a binary search tree [12].

In this section we apply the notion of Cartesian tree matching to the suffix tree as in the cases of parameterized matching and order-preserving matching [8, 13]. We first define the Cartesian suffix tree, and show that it can be built in randomized O(n) time or worst-case O(nlogn) time using the result from Cole and Hariharan [12].

Note that we append a special character −1 to the end of each parent-distance representation to ensure that no string is a prefix of another string.

There are several algorithms efficiently constructing the suffix tree, such as McCreight’s algorithm [24] and Ukkonen’s algorithm [26]. However, the distinct right context property [16, 8] should hold in order to apply these algorithms, which means that the suffix link of every internal node should point to an explicit node. The Cartesian suffix tree does not have the distinct right context property. In Figure 3, the internal node marked with A does not satisfy this property because PD(T[2..6])=PD(T[7..11])=(0,0,1,0,0) and thus there is no explicit node corresponding to parent-distance representation (0,0,1,0).

In order to handle this issue, we use an algorithm due to Cole and Hariharan [12]. This algorithm can construct a compacted trie for a quasi-suffix collection, which satisfies the following properties:

One more property we need to perform Cole and Hariharan’s algorithm is a character oracle, which returns the i-th character of sj in constant time. We can do this in constant time using Equation 1, once the parent-distance representation of T is computed.

Since we have all properties needed to perform Cole and Hariharan’s algorithm, we can construct a Cartesian suffix tree in randomized O(n) time using O(n) space [12]. In the worst case, it can be built in O(nlogn) time by using a binary search tree instead of a hash table to store the children of each node in the suffix tree, because the alphabet size |Σ| is O(n). We can also modify our algorithm to construct a Cartesian suffix tree online, using the idea in [23, 25].

S.G. Park and K. Park were supported by Institute for Information & communications Technology Promotion(IITP) grant funded by the Korea government(MSIT) (No. 2018-0-00551, Framework of Practical Algorithms for NP-hard Graph Problems). A. Amir and G.M. Landau were partially supported by the Israel Science Foundation grant 571/14, and Grant No. 2014028 from the United States-Israel Binational Science Foundation (BSF).