The main aim of this paper is to solve an inverse source problem for a general nonlinear hyperbolic equation. Combining the quasi-reversibility method and a suitable Carleman weight function, we define a map of which fixed point is the solution to the inverse problem. To find this fixed point, we define a recursive sequence with an arbitrary initial term by the same manner as in the classical proof of the contraction principle. Applying a Carleman estimate, we show that the sequence above converges to the desired solution with the exponential rate. Therefore, our new method can be considered as an analog of the contraction principle. We rigorously study the stability of our method with respect to noise. Numerical examples are presented. 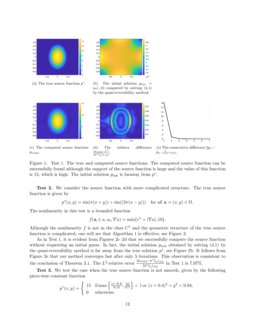 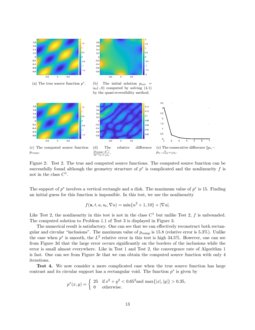 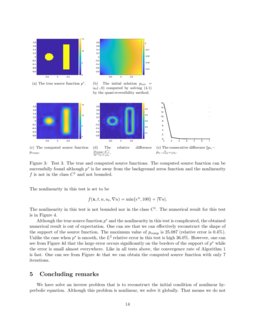 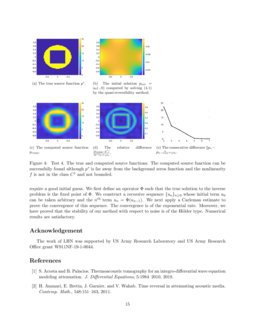 Let c:Rd→[1,¯¯c], for some given finite number ¯¯c, be a function in the class C2(Rd). Consider the following initial value problem

where p is the initial source function. Let Ω be an open and bounded domain in Rd with smooth boundary ∂Ω. Let T be a positive number. Define ΩT=Ω×[0,T] and ΓT=∂Ω×[0,T]. The reader can find the conditions on p, c and F that guarantee the existence, uniqueness and regularity results for (1.1) in many textbooks about PDEs, see e.g. [8, 12]. Studying the these properties is of (1.1) is out of the scope of this paper. We consider them as assumptions. The main aim of this paper is to solve the following inverse problem:

Problem 1.1 can be considered as the nonlinear version of the important problem arising from bio-medical imaging, called thermo/photo-acoustics tomography. The experiment leading to this problem is as follows, see [35, 36, 46]. One sends non-ionizing laser pulses or microwave to a biological tissue under inspection (for instance, woman’s breast in mamography). A part of the energy will be absorbed and converted into heat, causing a thermal expansion and a subsequence ultrasonic wave propagating in space. The ultrasonic pressures on a surface around the tissue are measured. Finding some initial information of the pressures from these measurements yields the structure inside this tissue. The current techniques to solve the problem of thermo/photo-acoustics tomography are only for linear hyperbolic equation. We list here some widely used methods. In the case when the waves propagate in the free space, one can find explicit reconstruction formulas in [11, 13, 43, 45], the time reversal method [20, 17, 18, 49, 50], the quasi-reversibility method [10, 41] and the iterative methods [19, 47, 48]. The publications above study thermo/photo-acoustics tomography for simple models for non-damping and isotropic media. The reader can find publications about thermo/photo-acoustics tomography for more complicated model involving a damping term or attenuation term [3, 2, 14, 1, 9, 16, 33, 34, 42]. Up to the author’s knowledge, this inverse source problem when the governing equation is general and nonlinear like (1.1) is not solved yet.

Our approach to solve Problem 1.1 is to reformulate it to be of the form Φ(x)=x for some operator Φ. The general framework to find the fixed point of Φ in this paper is to construct a sequence by the same the sequence defined in the classical proof of the contraction principle. Take any initial solution to the nonlinear inverse problem, denoted by x0 and then recursively define xn=Φ(xn−1) for n>0. In general, the convergence of {xn}n≥0 to the fixed point of Φ is not guaranteed. However, we discovered recently in [39], see also [5, 6], that if we include some suitable Carleman weight function in the definition of Φ then the convergence holds true. In the current paper, we define Φ by including the Carleman weight function in [26, Lemma 6.1] and [7, Theorem 1.10.2] into the classical quasi-reversibility method, which was first introduced in [37]. The proof of the contractional behavior of Φ relies on the Carleman estimate in [26, Lemma 6.1] and [7, Theorem 1.10.2]. The main theorems in this paper confirm that the recursive sequence above converges to the true solution. The stability with respect to the noise contained in the given data is of the Hölder type.

The paper is organized as follows. In Section 2, we introduce our iteration. In Section 3, we prove the convergence of the sequence generated in Section 2. In Section 4, we present some numerical tests. Section 5 is for concluding remarks.

2 An iterative method to solve Problem 1.1

Problem 1.1 can be reduced to the problem of computing a function u=u(x,t) defined on ¯¯¯¯¯¯¯¯¯¯¯¯¯¯¯¯¯¯¯¯¯¯¯Ω×[0,T] satisfying the following problem involving a nonlinear hyperbolic equation, the lateral Cauchy data and an initial condition

In the case of success, one can set p(x)=u(x,0) for all x∈Ω as the computed solution to Problem 1.1. Due to the presence of the nonlinearity F, numerically solving (2.1) is extremely challenging. Conventional methods to do so are based on optimization. That means, one minimizes some mismatch functionals, for e.g.,

subject to the boundary and initial constraints in the last three lines of (2.1). The computed solution to (2.1) is set as the obtained minimizer. However, due to the nonlinearity F, such a functional is not convex. It might have multiple minima and ravines. Therefore, the success of the methods based on optimization depends on the good initial guess. In reality, good initial guesses are not always available. Motivated by this challenge, we propose to construct a fixed-point like iterative sequence based on the quasi-reversibility method and a Carleman estimate in [26, Lemma 6.1] and [7, Theorem 1.10.2]. The convergence of this sequence to compute solution to (2.1) will be proved by the contraction principle and a Carleman estimate. Our Carleman-based iterative algorithm to numerically solve (2.1) is as follows.

Let p>⌈(d+1)/2⌉+2 where ⌈(d+1)/2⌉ is the smallest integer that is greater than or equal to (d+1)/2. Then, Hp(ΩT) is continuously embedded into C2(ΩT). The convergence of our method to solve (2.1) is based on the following Carleman weighted norms.

Assume that the set of admissible solutions

is nonempty. We construct a sequence {un}n≥0⊂H that converges to the solution to (2.1). Take an arbitrary function u0∈H. Assume by induction that un is known. We set un+1=Φ(un) where Φ(un) is the unique minimizer of Jn:H→R defined as

See (2.3) for the norm of the regularity term ϵ∥v∥2Hpλ,0(ΩT). Due to the compact embedding from Hp(ΩT) to H2(ΩT), the functional Jn is weakly lower semi-continuous. The presence of the regularization term guarantees that Jn is coercive. Hence, Jn has a minimizer un+1 on the close and convex set H in Hp(ΩT). The uniqueness of un+1 is due to the strict convexity of Jn. An alternative way to obtain the existence and uniqueness of the minimizer is to argue similarly to the proofs of Theorem 2.1 in [4] or Theorem 4.1 in [30]. We will prove that the sequence {un}n≥0 converges to the solution to (2.1). This suggests Algorithm 1 to solve Problem 1.1.

The presence of the Carleman weight functions Wλ,η(x,t) and that of the weight function Wλ,0(x,t) in the regularization term in (2.4) play the key role in proving the convergence of the sequence {un}n≥0 to the true solution to (???). See Theorem 3.1 for details.

One can replace the homogeneous initial condition for ut(x,0) in (1.1) by the non-homogenous one ut(x,0)=q(x) for all x∈Rd for some given function q. The analysis leading to the numerical method and the proof for the convergence of the method will be the same.

3.1 The statement of the convergence theorem

Since Ω is a bounded domain, it is contained in a large disk D=B(R)={x∈Rd:|x|<R} for some positive number R. Before stating the convergence theorems, we recall an important Carleman estimate. For η>0 and ε>0, define

The following lemma plays a key role in our analysis.

Assume that the point x0 in the definition of the Carleman weight function in (2.2) is in the set D∖¯¯¯¯Ω and that the coefficient c in (1.1) satisfies the condtion

for (x,t)∈Dη,ε. The vector valued function Z and the function Y satisfy

Hence, to obtain Lemma 3.1, we need to extend the function z to D±η,ε.

With the choice of η and ε above, the Carleman estimate (3.3) holds true for all (x,t)∈ΩT.

We now state the main theorem of the paper. Let δ>0 be a noise level. By noise level δ, we assume that there is a function E in Hp(ΩT) satisfying

where f∗ and g∗ are the noiseless version of the data f and g respectively. The true solution to (2.1), with f and g replaced by f∗ and g∗ respectively, is denoted by u∗. That means, u∗|ΓT=f∗ and ∂νu∗|ΓT=g∗.

In practice, the condition that ∥F∥C1(¯¯¯Ω×R×Rd)<∞ might not hold true. In this case, we need to know in advance a number M such that the true solution u∗ to (2.1) belongs to the ball BM={v∈Hp(ΩT):∥v∥Hp(ΩT)<M}. This requirement does not weaken our result since M can be arbitrarily large. In order to compute u∗, we proceed as follows. Due to the Sobolev embedding theorem, ∥u∗∥C1(¯¯¯ΩT)<C3M for some constant C3. Let χ:¯¯¯¯Ω×[0,∞)×R×R×Rd→R be a function in the class C1 and satisfy

Then, it is obvious that u∗ solves

The auxiliary step above and the requirement about the knowledge of the number M is only for the theoretical purpose. In our computations in Section 4, we obtain satisfactory numerical results by applying Algorithm 1 directly on (2.1) rather than (3.10). Although the condition ∥F∥C1(¯¯¯Ω×[0,T]×R×R×Rd)<∞ does not satisfy, we do not experience any difficulty.

We present the proof of this theorem in the next subsection. The proof is motivated by [5, 6, 39].

Throughout the proof, C is a generic constant depending only on Ω, D, c, x0, T, and ∥F∥C1. In the proof, we use the Carleman weighted Sobolev norms ∥⋅∥Hsλ,η(ΩT) defined in Definition 2.1 with some different values of s, λ and η. We split the proof into several steps.

Using the Fundamental theorem of Calculus, we have

For simplicity, we numerically solve Problem 1.1 in the 2-dimensional case. We set Ω=(−1,1)2. To solve the forward problem, we approximate R2 by the square G=(−R,R)2 where R>1 is a large number. We then employ the explicit scheme to solve (1.1) on G. In our computation, R=4. We set the final time T=2<4. In this setting, the nonlinear wave generated by an unknown source supported inside Ω does not have enough time to propagate to ∂G. Therefore, the computed wave is the restriction of the solution to (1.1) on G×[0,T]. Our implementation is based on the finite difference method, in which the step size in space is dx=0.03 and the step size in time is dt=0.0132. These values of step sizes in space and time are chosen such that dt/dx=0.44<0.5. Thus, the computed wave by the explicit scheme is reliable.

In this section, we set the noise level δ=10%. That means the data we use are given by

Implementing Algorithm 1 is straight forward. The most complicated part is Step 3. That is how to minimize a function Jn defined in (2.4). This step is equivalent to the problem solving a linear equation subject to some boundary and initial constraints by the quasi-reversibility method. We employ the optimization package built-in in MATLAB with the command “lsqlin” for this step. The implementation is very similar to the one described in [44, Section 6]. We do not repeat the details of implementation here. Although the norm in the regularization term is Hpλ,0(ΩT), in our computational program, we use a simpler norm H2λ,0(ΩT) to simplify the computational scripts. This change does not effect the satisfactory outputs. The ”artificial” parameters for all tests below are: ϵ=10−14, λ=2.1 and η=0.5. These parameters are numerically chosen such that the reconstruction result is satisfactory for test 1. Then, we use these values for all other tests.