Information extraction (IE) from text has largely focused on relations between individual entities, such as who has won which award. However, some facts are never fully mentioned, and no IE method has perfect recall. Thus, it is beneficial to also tap contents about the cardinalities of these relations, for example, how many awards someone has won. We introduce this novel problem of extracting cardinalities and discusses the specific challenges that set it apart from standard IE. We present a distant supervision method using conditional random fields. A preliminary evaluation results in precision between 3 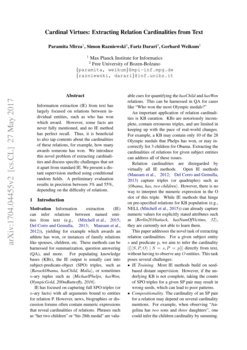 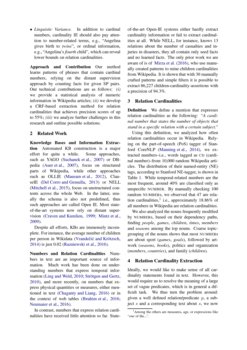 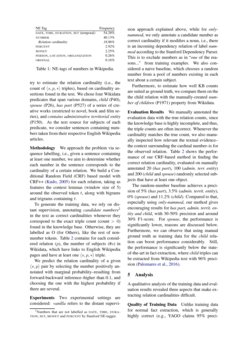 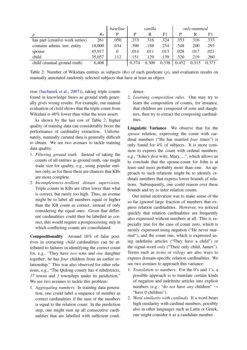 Extracting Arabic Relations from the Web

The goal of this research is to extract a large list or table from named...
Shimaa M. Abd El-salam, et al. ∙

RTE: A Tool for Annotating Relation Triplets from Text

In this paper we present the RuSentRel corpus including analytical texts...
Natalia Loukachevitch, et al. ∙

Towards a relation extraction framework for cyber-security concepts

Information extraction (IE) can infer relations between named entities from text (e.g., Mitchell et al. (2015); Del Corro and Gemulla (2013); Mausam et al. (2012)), yielding for example which awards an athlete has won, or instances of family relations like spouses, children, etc. These methods can be harnessed for summarization, question answering (QA), and more. For populating knowledge bases (KBs), the IE output is usually cast into subject-predicate-object (SPO) triples, such as ⟨BarackObama, hasChild, Malia⟩, or sometimes n-ary tuples such as ⟨MichaelPhelps, hasWon, OlympicGold, 200mButterfly, 2016⟩.

IE has focused on capturing full SPO triples (or n-ary facts) with all arguments bound to entities for relation P. However, news, biographies or discussion forums often contain numeric expressions that reveal cardinalities of relations. Phrases such as “her two children” or “his 28th medal” are valuable cues for quantifying the hasChild and hasWon relations. This can be harnessed in QA for cases like “Who won the most Olympic medals?”

An important application of relation cardinalities is KB curation. KBs are notoriously incomplete, contain erroneous triples, and are limited in keeping up with the pace of real-world changes. For example, a KB may contain only 10 of the 28 Olympic medals that Phelps has won, or may incorrectly list 3 children for Obama. Extracting the cardinalities of relations for given subject entities can address all of these issues.

Relation cardinalities are disregarded by virtually all IE methods. Open IE methods Mausam et al. (2012); Del Corro and Gemulla (2013) capture triples (or quadruples) such as ⟨Obama, has, two children⟩. However, there is no way to interpret the numeric expression in the O slot of this triple. While IE methods that hinge on pre-specified relations for KB population (e.g., NELL Mitchell et al. (2015)) can already capture numeric values for explicitly stated attributes such as ⟨Berlin2016attack, hasNumOfVictims, 32⟩, they are currently not able to learn them.

This paper addresses the novel task of extracting relation cardinalities. For a given subject entity s and predicate p, we aim to infer the cardinality |{⟨S,P,O⟩ | S=s,P=p}| directly from text, without having to observe any O entities. This task poses several challenges:

Our method learns patterns of phrases that contain cardinal numbers, relying on the distant supervision approach by counting facts for given SP pairs. Our technical contributions are as follows: (i) we provide a statistical analysis of numeric information in Wikipedia articles; (ii) we develop a CRF-based extraction method for relation cardinalities that achieves precision scores of up to 55%; (iii) we analyze further challenges in this research and outline possible solutions.

Automated KB construction is a major effort for quite a while. Some approaches, such as YAGO Suchanek et al. (2007) or DBpedia Auer et al. (2007), focus on structured parts of Wikipedia, while other approaches such as OLLIE Mausam et al. (2012), ClauseIE Del Corro and Gemulla (2013) or NELL Mitchell et al. (2015), focus on unstructured contents across the whole Web. In the latter, usually the schema is also not predefined, thus such approaches are called Open IE. Most state-of-the-art systems now rely on distant supervision Craven and Kumlien (1999); Mintz et al. (2009).

Despite all efforts, KBs are immensely incomplete. For instance, the average number of children per person in Wikidata Vrandečić and Krötzsch (2014) is just 0.02 Razniewski et al. (2016).

Numbers in text are an important source of information. Much work has been done on understanding numbers that express temporal information Ling and Weld (2010); Strötgen and Gertz (2010), and more recently, on numbers that express physical quantities or measures, either mentioned in text Chaganty and Liang (2016) or in the context of web tables Ibrahim et al. (2016); Neumaier et al. (2016).

In contrast, numbers that express relation cardinalities have received little attention so far. State-of-the-art Open-IE systems either hardly extract cardinality information or fail to extract cardinalities at all. While NELL, for instance, knows 13 relations about the number of casualties and injuries in disasters, they all contain only seed facts and no learned facts. The only prior work we are aware of is of  mirza2016expanding, who use manually created patterns to mine children cardinalities from Wikipedia. It is shown that with 30 manually crafted patterns and simple filters it is possible to extract 86,227 children-cardinality-assertions with a precision of 94.3%.

We define a mention that expresses relation cardinalities as the following: “A cardinal number that states the number of objects that stand in a specific relation with a certain subject.”

Using this definition, we analyzed how often relation cardinalities occur in Wikipedia. Relying on the part-of-speech (PoS) tagger of Stanford CoreNLP Manning et al. (2014), we extracted numbers–i.e., words tagged as cd (cardinal number)–from 10,000 random Wikipedia articles. The distribution of their named-entity (NE) tags, according to Stanford NE-tagger, is shown in Table 1

. While temporal-related numbers are the most frequent, around 40% are classified only as unspecific

We also analyzed the nouns frequently modified by numbers, based on their dependency paths, finding people, games, children, times, members and seasons among the top nouns. Coarse topic-grouping of the nouns shows that most numbers are about sport (games, goals), followed by artwork (seasons, books), politics and organization (members, countries), and family (children).

Ideally, we would like to make sense of all cardinality statements found in text. However, this would require us to resolve the meaning of a large set of vague predicates, which is in general a difficult task. We thus turn the problem around: given a well defined relation/predicate p, a subject s and a corresponding text about s

, we now try to estimate the relation cardinality (i.e., the count of

⟨s,p,∗⟩ triples), based on cardinality assertions found in the text. We chose four Wikidata predicates that span various domains, child (P40), spouse (P26), has part (P527) of a series of creative works (restricted to novel, book and film series), and contains administrative territorial entity (P150). As the text source for subjects of each predicate, we consider sentences containing numbers taken from their respective English Wikipedia articles.

We approach the problem via sequence labelling, i.e., given a sentence containing at least one number, we aim to determine whether each number in the sentence corresponds to the cardinality of a certain relation. We build a Conditional Random Field (CRF) based model with CRF++ Kudo (2005) for each relation, taking as features the context lemmas (window size of 5) around the observed token t, along with bigrams and trigrams containing t.

To generate the training data, we rely on distant supervision, annotating candidate numbers222Numbers that are not labelled as date, time, duration, set, money and percent by Stanford NE-tagger. in the text as correct cardinalities whenever they correspond to the exact triple count (count >0) found in the knowledge base. Otherwise, they are labelled as O (for Others), like the rest of non-number tokens. Table 2 contains for each considered relation (p), the number of subjects (#s) in Wikidata, which have links to English Wikipedia pages and have at least one ⟨s,p,∗⟩ triple.

We predict the relation cardinality of a given ⟨s,p⟩

pair by selecting the number positively annotated with marginal probability–resulting from forward-backward inference–higher than 0.1, and choosing the one with the highest probability if there are several.

Two experimental settings are considered: vanilla refers to the distant supervision approach explained above, while for only-nummod, we only annotate a candidate number as correct cardinality if it modifies a noun, i.e., there is an incoming dependency relation of label nummod according to the Stanford Dependency Parser. This is to exclude numbers as in “one of the reasons…” from training examples. We also considered a naive baseline, which chooses a random number from a pool of numbers existing in each text about a certain subject.

Furthermore, to estimate how well KB counts are suited as ground truth, we compare them on the the child relation with the manually-created number of children (P1971) property from Wikidata.

We manually annotated the evaluation data with the true relation counts, since the knowledge base is highly incomplete, and thus, the triple counts are often incorrect. Whenever the cardinality matches the true count, we also manually inspected how relevant the textual evidence–the context surrounding the cardinal number–is for the observed relation. Table 2 shows the performance of our CRF-based method in finding the correct relation cardinality, evaluated on manually annotated 20 (has part), 100 (admin. terr. entity) and 200 (child and spouse) randomly selected subjects that have at least one object.

The random-number baseline achieves a precision of 5% (has part), 3.5% (admin. territ. entity), 0% (spouse) and 11.2% (child). Compared to that, especially using only-nummod, our method gives encouraging results for has part, admin. territ. entity and child, with 30-50% precision and around 30% F1-score. For spouse, the performance is significantly lower, reasons are discussed below. Furthermore, we can observe that using manual ground truth as training data for the child relation can boost performance considerably. Still, the performance is significantly below the state-of-the-art in fact extraction, where child triples can be extracted from Wikipedia text with 96% precision Palomares et al. (2016).

As shown by the last row of Table 2, higher quality of training data can considerably boost the performance of cardinality extraction. Unfortunately, manually curated data is generally difficult to obtain. We see two avenues to tackle training data quality:

Around 16% of false positives in extracting child cardinalities can be attributed to failures in identifying the correct count for, e.g., ”They have two sons and one daughter together; he has four children from an earlier relationship.” This was also observed for other relations, e.g., “The Qidong county has 4 subdistricts, 17 towns and 3 townships under its juridiction.” We see two avenues to tackle this problem:

We observe that for the spouse relation, expressing the count with cardinal numbers (“He has married four

times”) is only found for 4% of subjects. It is more common to express the count with ordinal numbers, e.g., “John’s

first wife, Mary, …”, which allows us to conclude that the spouse-count for John is at least–and most probably more than–one. An approach to such relations might be to identify ordinals numbers that express lower bounds of relations. Subsequently, one could reason over these bounds and try to infer relation counts.

In this paper we have introduced the problem of relation cardinality extraction. We believe that relation cardinalities can be useful in a variety of tasks. Our next goal is to make distant supervision incompleteness-resilient and to deal with compositionality, hoping that these can improve the precision of our approach. We also aim to take ordinals into account and to experiment with linguistic transformation for the cases of cardinalities 0 and 1, hoping that these could boost the recall.

A limitation of our work is also that we only focus on Wikipedia articles, assume that all statements are about the article’s subject, and just take the statement with the highest confidence. In future work we aim to include a larger article base in combination with named entity recognition, coreference resolution and a truth consolidation step.

We thank Werner Nutt and Sebastian Rudolph for their feedback on an earlier version of this work. We thank the anonymous reviewers for their helpful comments. This work has been partially supported by the project “The Call for Recall”, funded by the Free University of Bozen-Bolzano.