Capacity of Multiple One-Bit Transceivers in a Rayleigh Environment

We analyze the channel capacity of a system with a large number of one-bit transceivers in a classical Rayleigh environment with perfect channel information at the receiver. With M transmitters and N=α M receivers, we derive an expression of the capacity per transmitter C, where C≤(1,α), as a function of α and signal-to-noise ratio (SNR) ρ, when M→∞. We show that our expression is a good approximation for small M, and provide simple approximations of C for various ranges of α and SNR ρ. We conclude that at high SNR, C reaches its upper limit of one only if the ratio α>1.24. Expressions for determining when C "saturates" as a function of α and ρ are given. 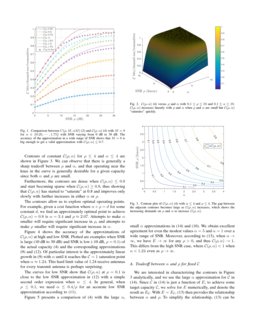 In an effort to save power and cost in wideband wireless transceiver systems, low-resolution (especially one-bit) analog-to-digital converters (ADCs) [1, 2, 3, 4, 5, 6, 7, 8, 9, 10, 11, 12, 13] and digital-to-analog converters (DACs) [14, 15, 16] are being considered in transmitter and receiver chains, especially in systems involving many such chains. The nonlinearity introduced by coarse quantization becomes a limiting factor in the achievable throughput of such a wireless system. Channel capacity is one measure of this throughput.

with various assumptions about the channel, the channel information, and communication schemes. Communication techniques including channel estimation and signal detection for a multiple-input multiple-output (MIMO) system with one-bit ADCs at the receiver are studied in

While many of the efforts consider low-resolution quantization effects at the transmitter or receiver, a few consider low-resolution quantization on both, including [17] and [18]. A linear minimum-mean-squared-error precoder design is proposed for a downlink massive MIMO scenario to mitigate the quantization distortion in [17] and the performance analysis of a system with a small number of one-bit transceivers is studied in [18]. We focus on a model where one-bit quantization is considered at both the transmitter and receiver:

where M and N are the number of transmitters and receivers, x∈{±1}M and y∈{±1}N are the transmitted and received signals, H∈RN×M is the channel matrix known to the receiver, v∈RN is the additive Gaussian noise with v∼N(0,I) and v is independent of x and H, ρ is the expected received SNR at each receive antenna. The function sign(⋅) provides the sign of the input as its output. The channel is modeled as real-valued since only the in-phase (I) information is used and the quadrature (Q) phase is ignored at the receiver. A Rayleigh channel is assumed, with each element to be independent Gaussian N(0,1). This assumption appears to hold for non-line of sight (NLOS) channels in many frequency bands [19], and also appears in the analysis in [6, 7, 8, 9, 10, 11, 14].

Our contribution is a large M and N analysis, where the ratio α=NM is constant, of the capacity for the model (1). Analytical expressions are derived that can be used to explain the behavior of the system in various limiting regimes of operation in α and SNR.

Ii Capacity for a large number of transmitters and receivers

where we have normalized by M, and where px(⋅) is the input distribution independent of H, and I(⋅;⋅) is the mutual information notation. When M,N→∞ with a ratio α=NM, the capacity C is defined as

Limiting capacities such as (3) are difficult to compute in closed form, but the “replica method” [20] can be brought to bear on the problem. Some details of how to apply the method are presented in Section IV. For now, we present the result:

where c(ρ) is the capacity of a single transceiver with SNR ρ, which is defined as

Equation (4) gives the capacity for any SNR ρ and α, and some limiting situations are readily analyzed, including: (i) high SNR, ρ→∞; (ii) low SNR, ρ→0; (iii) many more receivers than transmitters, α→∞; (iv) many more transmitters than receivers, α→0. These are now presented, with only limited proofs.

The expression (9) is not especially intuitive, but it is not difficult to solve. We show some numerical examples in Section III. It turns out that in this case, solving (9

) is essentially equivalent to solving for the “quenched entropy” for Gibbs learning of the Ising perceptron (Section 7.2 in

For small x, we use a Taylor series expansion to obtain

to second order in ρ. It turns out that this result matches the expression in [6], with a difference in factor of 12ln2 that comes from the fact that [6] considers two bits per transmission, and ‘nats’ instead of ‘bits’.

More will be said about this in Section III.

where c(ρ) is the capacity of a single transceiver, defined in (5).

Contours of constant C(ρ,α) for ρ≤4 and α≤4 are shown in Figure 3. We can observe that there is generally a sharp tradeoff between ρ and α, and that operating near the knee in the curve is generally desirable for a given capacity since both α and ρ are small.

Furthermore, the contours are dense when C(ρ,α)≤0.8 and start becoming sparse when C(ρ,α)≥0.8, thus showing that C(ρ,α) has started to “saturate” at 0.8 and improves only slowly with further increases in either α or ρ.

Figure 4 shows the accuracy of the approximations of C(ρ,α) at high and low SNR. Plotted are examples when SNR is large (10 dB to 30 dB) and SNR is low (-10 dB, ρ=0.1) of the actual capacity (4) and the corresponding approximations (9) and (12). Of particular interest is the approximately linear growth in (9) with α until it reaches the C=1 saturation point when α≈1.24. This hard limit value of 1.24 receive antennas for every transmit antenna is perhaps surprising.

Iii-a Tradeoff between α and ρ for fixed C

We are interested in characterizing the contours in Figure 3 analytically, and we use the large α approximation for C in (14). Since C in (14) is just a function of E, to achieve some target capacity C, we solve for E numerically, and denote the result as EC. With E=EC, (13) then provides the relationship between α and ρ. To simplify the relationship, (13) can be further approximated as

with good accuracy when ρ≤1.5. The relationship between α and ρ is then

Clearly, there are many other comparisons and tradeoffs we can analyze using (4) and its approximations. We briefly describe how the replica method was applied to obtain (4).

The replica method, a tool used in statistical mechanics and applied to the theory of spin glass [20], has been applied in many communication system contexts [22, 23, 24, 25, 26]

[27, 21], error-correcting codes [28], and image restoration [29]. A mathematically rigorous justification of the replica method is elusive, but the success of the method maintains its popularity. We apply the method to solve for a closed-form answer to (3). We omit many details, and present only the primary steps.

Because the channel is unknown to the transmitter, according to [18], the optimal input distribution is px(x)=12M, and then (2) becomes

where H(⋅) is the standard definition of entropy.

We start with the identity

which holds for n∈R. The idea of the replica method is to compute EH,y(p(y|H))n as a function of n by treating n as a positive integer, and then assume the result to be valid for n∈R.

We assume the limit of M and n can commute, then

Now, we regard n as a positive integer and we have

are i.i.d. uniform distributed in

where yk is the kth element of y, Q(⋅) is the well-known Q-function, and hTk is the kth row of H,

We can consider μM(R) as the distribution of a random symmetric matrix R, and we have

Similarly to [24], we apply Varadhan’s theorem and Gartner-Ellis theorem[30] and obtain

Based on the distribution of R in (25), we further have

where xa are independent uniform distributed in {±1}.

R and ~R that achieve the optimal value described in (26) are called the saddle point[21]. The saddle point either stays on the boundary (Rab=1 or Rab=−1) or satisfies ∂f∂~Rab=∂f∂Rab=0, i.e.

Here, we further assume that permutations among the (n+1) replicas with index a=0,1,2,⋯,n will not change the saddle point. This assumption is called the “replica symmetry” (RS) assumption. At the saddle point, we let

which are called RS saddle points.

The real-valued model (1) is now extended to both I and Q phase at the transmitter and receiver, and hence

Since the channel is known only to the receiver, the uniform input is optimal and the channel capacity is

When M,N→∞ with a ratio α=NM, the capacity ^C is defined as

Similarly to the analysis for real signal, we have

Using the replica method with the RS assumption, we obtain

Consequently, the I-Q model capacity is twice the I-only capacity.

We have presented the capacity per transmitter in the limit where the number of single-bit transmitters M and receivers N is large, and where α=N/M was fixed. A flat Rayleigh fading channel was considered, and we assumed the channel was only known by the receiver. We were able to derive a variety of approximations using the analytical results, and showed that the large-system formulas are useful even for a small numbers of transmitters and receivers. We examined how C saturated with either large α or ρ, and gave formulas for exploring the contours of fixed C as a function of α and ρ. Further work in expanding these results to different channel models would be of great interest.