We revisit Shannon's problem of bounding the capacity of bandlimited Gaussian channel (BLGC) with peak power constraint, and extend the problem to the peak-to-average-power-ratio (PAPR) constrained case. By lower bounding the achievable information rate of pulse amplitude modulation with independent and identically distributed input under a PAPR constraint, we obtain a general capacity lower bound with respect to the shaping pulse. We then evaluate and optimize the lower bound by employing some parametric pulses, thereby improving the best existing result. Following Shannon's approach, capacity upper bound for PAPR constrained BLGC is also obtained. By combining our upper and lower bounds, the capacity of PAPR constrained BLGC is bounded to within a finite gap which tends to zero as the PAPR constraint tends to infinity. Using the same approach, we also improve existing capacity lower bounds for bandlimited optical intensity channel at high SNR. 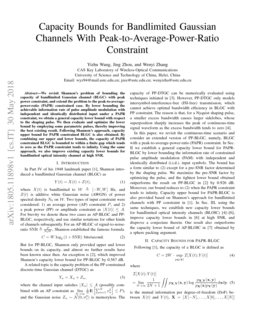 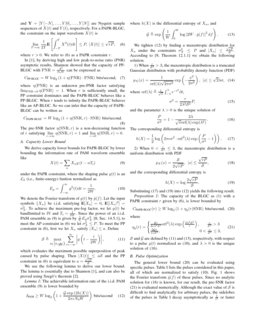 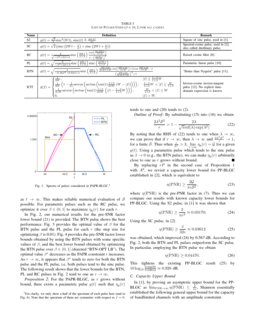 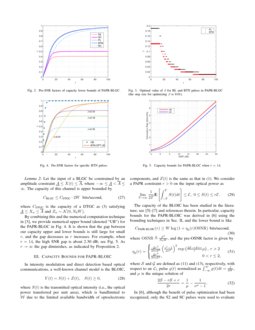 In Part IV of his 1948 landmark paper [1], Shannon introduced a bandlimited Gaussian channel (BLGC) as

where X(t) is bandlimited to W≜[−W,W] Hz, and Z(t) is additive white Gaussian noise (AWGN) of power spectral density N0 on W. Two types of input constraint were considered: 1) an average power (AP) constraint P, and 2) a peak power (PP) or amplitude constraint as |X(t)|≤A. For brevity we denote these two cases as AP-BLGC and PP-BLGC, respectively, and use similar notations for other kinds of channels subsequently. For an AP-BLGC of signal-to-noise-ratio SNR≜PN0W, Shannon established the famous formula

But for PP-BLGC, Shannon only provided upper and lower bounds on its capacity, and almost no further results have been known since then. An exception is [2], which improved Shannon’s capacity lower bound for PP-BLGC by 0.567 dB.

where the channel input satisfies |Xn|≤A (possibly combined with an AP constraint as limN→∞1NE[∑Nn=1x2n]≤P), and the Gaussian noise Zn∼N(0,σ2z) is memoryless. The capacity of PP-DTGC can be numerically evaluated using techniques initiated in [3]. However, PP-DTGC only models intersymbol-interference-free (ISI-free) transmission, which cannot achieve optimal bandwidth efficiency in BLGC with PP constraint. The reason is that, for a Nyquist shaping pulse, a smaller excess bandwidth causes larger sidelobes, whose superposition sharply increases the peak of continuous-time signal waveform as the excess bandwidth tends to zero [4].

In this paper, we revisit the continuous-time scenario and consider an extended version of PP-BLGC, namely, BLGC with a peak-to-average-power-ratio (PAPR) constraint. In Sec. II we establish a general capacity lower bound for PAPR-BLGC by lower bounding the information rate of constrained pulse amplitude modulation (PAM) with independent and identically distributed (i.i.d.). input symbols. The bound has a form similar to (2) except for a pre-SNR factor determined by the shaping pulse. We maximize the pre-SNR factor by optimizing the pulse, and the tightest lower bound obtained outperforms the result on PP-BLGC in [2] by 0.926 dB. Moreover, our bound reduces to (2) when the PAPR constraint tends to infinity. Capacity upper bound for PAPR-BLGC is also provided based on Shannon’s approach for PP-BLGC in [1]. In Sec. III, using the same techniques, we study bandlimited optical intensity channels (BLOIC) [4, 5, 6], improve capacity lower bounds in [6] at high SNR, and disprove a conjecture therein. Our result also outperforms the capacity lower bound of AP-BLOIC in [7] obtained by a sphere packing argument. Finally, Sec. IV concludes the paper.

Following [1], the capacity of a BLGC is defined as

is the mutual information per degree-of-freedom (DoF) between

In [1], by deriving high and low peak-to-noise ratio (PNR) asymptotic results, Shannon showed that the capacity of PP-BLGC with PNR=A2N0W can be expressed as

under the PAPR constraint, where the shaping pulse g(t) is an L2 (i.e., finite-energy) funtion normalized as

We denote the Fourier transform of

which evaluates the maximum possible superposition of peak caused by pulse shaping. Then |X(t)|≤aS and the PP constraint in (6) is equivalent to a=√rPS.

We use the following lemma to derive our lower bound. The lemma is essentially due to Shannon [1], and can also be proved using Szegö’s theorem [2].

Lemma 1: The achievable information rate of the i.i.d. PAM ensemble (9) is lower bounded by

where h(X) is the differential entropy of Xn, and

We tighten (12) by finding a maxentropic distribution for Xn under the constraints σ2X≤P and |Xn|≤√rPS. According to [References, Theorem 12.1.1] we obtain the following solution.

and the parameter λ>0 is the unique solution of

The corresponding differential entropy is

and the corresponding differential entropy is

Proposition 1: The capacity of the BLGC as (1) with a PAPR constraint r given by (6), is lower bounded by

The general lower bound (20) can be evaluated using specific pulses. Table I lists the pulses considered in this paper. Fig. 1 shows the Fourier transform ^g(f) of the pulses used in PAPR-BLGC, all of which are normalized to satisfy (10). Since no analytic solution for (16) is known, for our result, the pre-SNR factor (21) is evaluated numerically. Although the exact value of S is difficult to find analytically for arbitrary pulses, the sidelobes of the pulses in Table I decay asymptotically as 1t2 or faster as t→∞. This makes reliable numerical evaluation of S possible. For parametric pulses such as the RC pulse, we optimize it over β∈(0,1] to maximize ηg(r) for each r.

In Fig. 2, our numerical results for the pre-SNR factor lower bound (21) is provided. The BTN pulse shows the best performance. Fig. 5 provides the optimal value of β for the BTN pulse and the PL pulse for each r (the step size for optimizing β is 0.01). Fig. 5 provides the pre-SNR factor lower bounds obtained by using the BTN pulses with some specific values of β, and the best lower bound obtained by optimizing the BTN pulse over β∈(0,1] (denoted “BTN-OPT LB”). The optimal value β∗ decreases as the PAPR constraint r increases. As r→∞, it appears that β∗ tends to zero for both the BTN pulse and the PL pulse, i.e. both pulses tend to the sinc pulse. The following result shows that the lower bounds for the BTN, PL and RC pulses in Fig. 2 tend to one as r→∞.

Proposition 2: For the PAPR-BLGC, as r grows without bound, there exists a parametric pulse g(t) such that ηg(r) tends to one and (20) tends to (2).

By replacing rP in the second case of Proposition 1 with A2, we revisit a capacity lower bound for PP-BLGC established in [2], which is equivalent to

where η(PNR) is the pre-PNR factor in (7). Thus we can compare our results with known capacity lower bounds for PP-BLGC. Using the S2 pulse, in [1] it was shown that

was obtained, which improved (24) by 0.567 dB. According to Fig. 2, both the BTN and PL pulses outperform the SC pulse. In particular, employing the BTN pulse we obtain

Remark: In PP-BLGC, the achievable rate using a specific pulse is determined by GS2, which is proportional to the slope of the corresponding curve in Fig. 5 when r≤3S2. But for PAPR-BLGC, when r>3S2, a pulse with larger GS2 is not necessarily better. Nevertheless, if two pulses have the same G (S), we always prefer the one that with smaller S (larger G).

By combining this and the numerical computation technique in [3], we provide numerical upper bound (denoted “UB”) for the PAPR-BLGC in Fig. 5. It is shown that the gap between our capacity upper and lower bounds is still large for small r, and the gap decreases as r increases. For example, when r=14, the high SNR gap is about 2.30 dB; see Fig. 5. As r→∞ the gap diminishes, as indicated by Proposition 2.

In intensity modulation and direct detection based optical communications, a well-known channel model is the BLOIC,

where S(t) is the transmitted optical intensity (i.e., the optical power transferred per unit area), which is bandlimited to W due to the limited available bandwidth of optoelectronic components, and Z(t) is the same as that in (1). We consider a PAPR constraint r>0 on the input optical power as

The capacity of the BLOIC has been studied in the literature; see [5, 7, 6] and references therein. In particular, capacity bounds for the PAPR-BLOIC was derived in [6] using the bounding techniques in Sec. II, and the lower bound is like

and μ is the unique solution of

In [6], although the benefit of pulse optimization had been recognized, only the S2 and SC pulses were used to evaluate the lower bound (30). Now we further consider the BTN and the ICIT pulses in Table I. Fig. 8 shows the spectra of these pulses which are normalized as (32) (note that in Fig. 1 the normalization is as (10)). Fig. 8 gives the corresponding results on the pre-OSNR factor, and Fig. 8 gives the corresponding optimal parameters. Compared to the results in Fig 2, the pre-OSNR factor lower bounds in Fig. 8 behave differently. The ICIT based lower bound performs the best at low PAPR (although it performs almost the same as the BTN based one when r<2), but it begins decreasing at r≈4.1. The BTN based lower bound decreases slower at high PAPR region, but our further calculation reveals that in fact it tends to zero as r→∞. The S2 based lower bound is the only non-decreasing bound which tends to 12πe. Since a PAM waveform ensemble with a given PAPR is still admissible in channels with higher PAPR constraints, the pre-OSNR factor of capacity, η(OSNR,r), is always non-decreasing with r. So our optimal lower bound ηopt(r) in Fig. 8 is also non-decreasing:

It was conjectured in [6] that at high OSNR, the maximum achievable pre-OSNR factor using i.i.d. PAM ensemble in the AP-BLOIC is 12πe, which is achieved using the S2 pulse. The present results show that the ICIT and BTN pulses perform better (but the input alphabet for X must be carefully chosen), and the former one achieves a pre-OSNR factor 0.06606, which outperforms 12πe by 0.26 dB. Moreover, this result also outperforms the result obtained by a sphere packing argument in [7], which shows that η(OSNR)≥1/16=0.0625 for the AP-BLOIC (i.e., PAPR-BLOIC as r→∞).

This paper studies the capacity of continuous-time Gaussian channels with given bandwidth under a PAPR constraint, namely, both a PP constraint and an AP constraint, connected by their ratio r. Such a combination of constraints is more relevant to practical systems than a single constraint. For both BLGC and BLOIC, by numerically evaluating information rates of i.i.d. PAM ensembles with optimized pulses, we obtain new achievable rate results which outperform existing ones. However, for both types of channels, the optimal pulse for a given PAPR is still unknown. When r is relatively small, the gaps between capacity upper and lower bounds are still considerable. These problems are left to future study.

This work was supported in part by the Key Research Program of Frontier Sciences of CAS under Grant QYZDY-SSW-JSC003, by the National Natural Science Foundation of China under Grant 61722114, and by the Fundamental Research Funds for the Central Universities under Grants WK3500000003 and WK3500000005.