We consider constructing capacity-achieving linear codes with minimum message size for private information retrieval (PIR) from N non-colluding databases, where each message is coded using maximum distance separable (MDS) codes, such that it can be recovered from accessing the contents of any T databases. It is shown that the minimum message size (sometimes also referred to as the sub-packetization factor) is significantly, in fact exponentially, lower than previously believed. More precisely, when K>T/gcd(N,T) where K is the total number of messages in the system and gcd(·,·) means the greatest common divisor, we establish, by providing both novel code constructions and a matching converse, the minimum message size as lcm(N-T,T), where lcm(·,·) means the least common multiple. On the other hand, when K is small, we show that it is in fact possible to design codes with a message size even smaller than lcm(N-T,T). 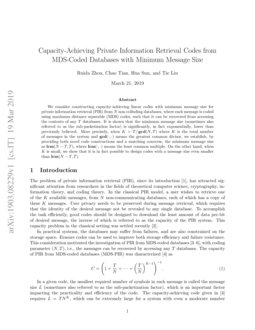 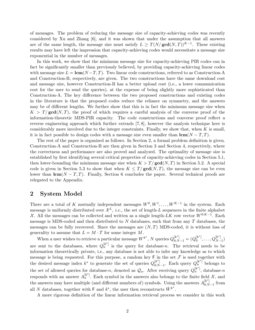 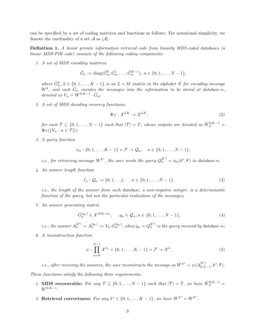 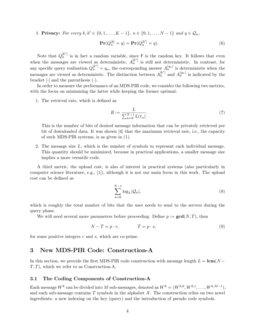 The problem of private information retrieval (PIR), since its introduction [1], has attracted significant attention from researchers in the fields of theoretical computer science, cryptography, information theory, and coding theory. In the classical PIR model, a user wishes to retrieve one of the K available messages, from N non-communicating databases, each of which has a copy of these K messages. User privacy needs to be preserved during message retrieval, which requires that the identity of the desired message not be revealed to any single database. To accomplish the task efficiently, good codes should be designed to download the least amount of data per-bit of desired message, the inverse of which is referred to as the capacity of the PIR system. This capacity problem in the classical setting was settled recently [2].

In practical systems, the databases may suffer from failures, and are also constrained on the storage space. Erasure codes can be used to improve both storage efficiency and failure resistance. This consideration motivated the investigation of PIR from MDS-coded databases [3, 4, 5, 6], with coding parameter (N,T), i.e., the messages can be recovered by accessing any T databases. The capacity of PIR from MDS-coded databases (MDS-PIR) was characterized [4] as

In this work, we show that the minimum message size for capacity-achieving PIR codes can in fact be significantly smaller than previously believed, by providing capacity-achieving linear codes with message size L=lcm(N−T,T). Two linear code constructions, referred to as Construction-A and Construction-B, respectively, are given. The two constructions have the same download cost and message size, however Construction-B has a better upload cost (i.e., a lower communication cost for the user to send the queries), at the expense of being slightly more sophisticated than Construction-A. The key difference between the two proposed constructions and existing codes in the literature is that the proposed codes reduce the reliance on symmetry, and the answers may be of different lengths. We further show that this is in fact the minimum message size when K>T/gcd1(N,T), the proof of which requires a careful analysis of the converse proof of the information-theoretic MDS-PIR capacity. The code constructions and converse proof reflect a reverse engineering approach which further extends [7, 8], however the analysis technique here is considerably more involved due to the integer constraints. Finally, we show that, when K is small, it is in fact possible to design codes with a message size even smaller than lcm(N−T,T).

The rest of the paper is organized as follows. In Section 2, a formal problem definition is given. Construction-A and Construction-B are then given in Section 3 and Section 4, respectively, where the correctness and performance are also proved and analyzed. The optimality of message size is established by first identifying several critical properties of capacity-achieving codes in Section 5.1, then lower-bounding the minimum message size when K>T/gcd1(N,T) in Section 5.2. A special code is given in Section 5.3 to show that when K≤T/gcd1(N,T), the message size can be even lower than lcm(N−T,T). Finally, Section 6 concludes the paper. Several technical proofs are relegated to the Appendix.

There are a total of K mutually independent messages W0,W1,…,WK−1

in the system. Each message is uniformly distributed over

XL, i.e., the set of length-L sequences in the finite alphabet X. All the messages can be collected and written as a single length-LK

W0:K−1. Each message is MDS-coded and then distributed to N databases, such that from any T databases, the messages can be fully recovered. Since the messages are (N,T) MDS-coded, it is without loss of generality to assume that L=M⋅T for some integer M.

When a user wishes to retrieve a particular message Wk∗, N queries Q[k∗]0:N−1=(Q[k∗]0,…,Q[k∗]N−1) are sent to the databases, where Q[k∗]n is the query for database-n. The retrieval needs to be information theoretically private, i.e., any database is not able to infer any knowledge as to which message is being requested. For this purpose, a random key F in the set F is used together with the desired message index k∗ to generate the set of queries Q[k∗]0:N−1. Each query Q[k∗]n belongs to the set of allowed queries for database-n, denoted as Qn. After receiving query Q[k∗]n, database-n responds with an answer A[k∗]n. Each symbol in the answers also belongs to the finite field X, and the answers may have multiple (and different numbers of) symbols. Using the answers A[k∗]0:N−1 from all N databases, together with F and k∗, the user then reconstructs ^Wk∗.

A more rigorous definition of the linear information retrieval process we consider in this work can be specified by a set of coding matrices and functions as follows. For notational simplicity, we denote the cardinality of a set A as |A|.

is in fact a random variable, since

In order to measure the performance of an MDS-PIR code, we consider the following two metrics, with the focus on minimizing the latter while keeping the former optimal:

A third metric, the upload cost, is also of interest in practical systems (also particularly in computer science literature, e.g., [1]), although it is not our main focus in this work. The upload cost can be defined as

which is roughly the total number of bits that the user needs to send to the servers during the query phase.

We will need several more parameters before proceeding. Define p:=gcd1(N,T), then

for some positive integers r and s, which are co-prime.

In this section, we provide the first MDS-PIR code construction with message length L=lcm(N−T,T), which we refer to as Construction-A.

3.1 The Coding Components of Construction-A

Each message Wk can be divided into M sub-messages, denoted as Wk=(Wk,0,Wk,1,…,Wk,M−1), and each sub-message contains T symbols in the alphabet X. The construction relies on two novel ingredients: a new indexing on the key (query) and the introduction of pseudo code symbols.

The first novel ingredient in the construction, which is different from previous ones in the literature, is the random key F=(F0,F1,…,FK−1), which is a length-K vector uniformly distributed in the set

where (⋅)r+s indicates modulo (r+s). In this code construction, we need to first choose a (in fact, any) linear (N,T)-MDS code C, in the alphabet X as our base code. There are many known techniques to construct such codes, such as Reed-Solomon codes and Cauchy matrix based constructions; see [9]. The coding functions can then be given as follows:

The corresponding queries (and query matrices such induced) and answers are marked bold in Table 1. In these ~Q matrices, each column has at least one element being 0, and thus the total number of transmission symbols is 6. It is seen that from (V00,V01), the symbol V02 can be recovered by the MDS property, and thus V12. Similarly, we can recover V11. Using both (V11,V12), we can then recover the original message W1 by decoding the MDS code C.

According to the last coding component function (the reconstruction function) in Construction-A, the correctness of the proposed code hinges on two conditions: |Ti|≥T for all i=0,1,…,s−1 and |Nm|≥T for all m=0,1,…,r−1. We establish these two conditions in the following lemma, whose proof can be found in Appendix A.

In Construction-A, for any request of message-k∗ and any random key F,

We also have the following main theorem for Construction-A.

The fact that the code is private is immediate, by observing that Q[k∗]n is uniformly distributed on the set

regardless of the value of k∗.

The expected lengths of the answers is

is being requested. The probabilities involved in the summand

By the definition of ~Qk,in, it is clear that if any item in

is less than r, then mink=0,1,…,K−1~Qk,i∗n<r for all n=0,1,…,N−1, which will induce N transmitted symbols in the retrieval from all databases for i=i∗; this event E occurs with probability 1−(s/(r+s))K−1. On the other hand, when the event E does not occur, in the vector

the number of elements that are less than r is N−T, which induces (N−T) symbols being transmitted. Therefore

from which it follows that the code is indeed capacity achieving, by taking into account (9). ∎

The following lemma is also immediate, and we state it as a lemma below.

Next we provide the coding components (3−6) in Construction-B.

4.1.1 An Uncompressed Description of Construction-B

The description of the coding components above is in a compressed form, and offers little intuition. The following equivalent description, on the other hand, can provide better intuition at the expense of more redundant items. Let the extended pattern matrix ¯P of size s×(s+r) be defined as

i.e., expanding the original pattern matrix P by appending an all-0 matrix of size s×(r−1). The same query answer can now be equivalently produced at each server by using the following auxiliary query

i.e., without using the ⌈⋅⌉s function mapping, and then following the same manner in answer generating, using the extended patter matrix ~P. The stored contents of message Wk across all the databases can be visualized as follows

where each column corresponds to a database, and the contents below the horizontal line are not stored physically, but can be generated as part of the answer computation.