We show canonicity and normalization for dependent type theory with a cumulative sequence of universes and a type of Boolean. The argument follows the usual notion of reducibility, going back to Godel's Dialectica interpretation and the work of Tait. A key feature of our approach is the use of a proof relevant notion of reducibility. 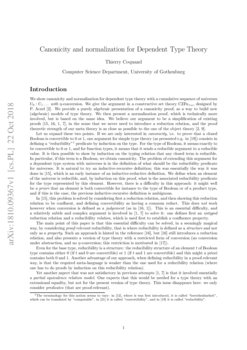 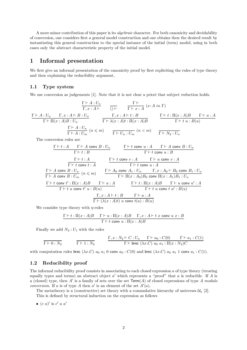 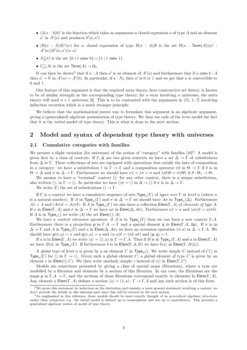 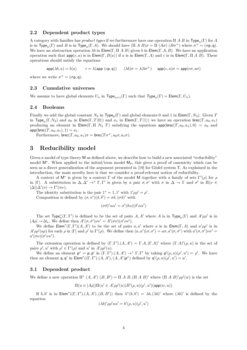 We show canonicity and normalization for dependent type theory with a cumulative sequence of universes U0:U1… with η-conversion. We give the argument in a constructive set theory CZFu<ω, designed by P. Aczel [2]. We provide a purely algebraic presentation of a canonicity proof, as a way to build new (algebraic) models of type theory. We then present a normalization proof, which is technically more involved, but is based on the same idea. We believe our argument to be a simplification of existing proofs [15, 16, 1, 7], in the sense that we never need to introduce a reduction relation, and the proof theoretic strength of our meta theory is as close as possible to the one of the object theory [2, 9].

Let us expand these two points. If we are only interested in canonicity, i.e. to prove that a closed Boolean is convertible to 0 or 1, one argument for simple type theory (as presented e.g. in [19]) consists in defining a “reducibility”111The terminology for this notion seems to vary: in [12], where is was first introduced, it is called “berechenbarkeit”, which can be translated by “computable”, in [21] it is called “convertibility”, and in [19] it is called “reducibility”. predicate by induction on the type. For the type of Boolean, it means exactly to be convertible to 0 or 1, and for function types, it means that it sends a reducible argument to a reducible value. It is then possible to show by induction on the typing relation that any closed term is reducible. In particular, if this term is a Boolean, we obtain canonicity. The problem of extending this argument for a dependent type system with universes is in the definition of what should be the reducibility predicate for universes. It is natural to try an inductive-recursive definition; this was essentially the way it was done in [15], which is an early instance of an inductive-reductive definition. We define when an element of the universe is reducible, and, by induction on this proof, what is the associated reducibility predicate for the type represented by this element. However, there is a difficulty in this approach: it might well be a priori that an element is both convertible for instance to the type of Boolean or of a product type, and if this is the case, the previous inductive-recursive definition is ambiguous.

In [15], this problem is solved by considering first a reduction relation, and then showing this reduction relation to be confluent, and defining convertibility as having a commun reduct. This does not work however when conversion is defined as a judgement (as in [16, 1]). This is an essential difficulty, and a relatively subtle and complex argument is involved in [1, 7] to solve it: one defines first an untyped reduction relation and a reducibility relation, which is used first to establish a confluence property.

The main point of this paper is that this essential difficulty can be solved, in a seemingly magical way, by considering proof-relevant reducibility, that is where reducibility is defined as a structure and not only as a property. Such an approach is hinted in the reference [16], but [16] still introduces a reduction relation, and also presents a version of type theory with a restricted form of conversion (no conversion under abstraction, and no η-conversion; this restriction is motivated in [17]).

Yet another aspect that was not satisfactory in previous attempts [1, 7] is that it involved essentially a partial equivalence relation model. One expects that this would be needed for a type theory with an extensional equality, but not for the present version of type theory. This issue disappears here: we only consider predicates (that are proof-relevant).

A more minor contribution of this paper is its algebraic character. For both canonicity and decidability of conversion, one considers first a general model construction and one obtains then the desired result by instantiating this general construction to the special instance of the initial (term) model, using in both cases only the abstract characteristic property of the initial model.

We first give an informal presentation of the canonicity proof by first expliciting the rules of type theory and then explaining the reducibility argument,

We use conversion as judgements [1]. Note that it is not clear a priori that subject reduction holds.

The conversion rules are

We consider type theory with η-rules

Finally we add N2:U1 with the rules

The informal reducibility proof consists in associating to each closed expression a of type theory (treating equally types and terms) an abstract object a′ which represents a “proof” that a is reducible. If A is a (closed) type, then A′ is a family of sets over the set Term(A) of closed expressions of type A modulo conversion. If a is of type A then a′ is an element of the set A′(a).

The metatheory is a (constructive) set theory with a commulative hierarchy of universes Un [2].

This is defined by structural induction on the expression as follows

It can then be shown222We prove this statement by induction on the derivation and consider a more general statement involving a context; we don’t provide the details in this informal part since this will be covered in the next section. that if a:A then a′ is an element of A′(a) and furthermore that if a conv b:A then a′=b′ in A′(a)=A′(b). In particular, if a:N2 then a′ is 0 or 1 and we get that a is convertible to 0 and 1.

One feature of this argument is that the required meta theory, here constructive set theory, is known to be of similar strength as the corresponding type theory; for a term involving n universes, the meta theory will need n+1 universes [9]. This is to be contrasted with the arguments in [15, 1, 7] involving induction recursion which is a much stronger principle.

We believe that the mathematical purest way to formulate this argument is an algebraic argument, giving a (generalized) algebraic presentation of type theory. We then use only of the term model the fact that it is the initial model of type theory. This is what is done in the next section.

2 Model and syntax of dependent type theory with universes

We present a slight variation (for universes) of the notion of “category” with families [10]333As emphasized in this reference, these models should be more exactly thought of as generalized algebraic structures rather than categories; e.g. the initial model is defined up to isomorphism and not up to equivalence). This provides a generalized algebraic notion of model of type theory.. A model is given first by a class of contexts. If Γ,Δ are two given contexts we have a set Δ→Γ of substitutions from Δ to Γ. These collections of sets are equipped with operations that satisfy the laws of composition in a category: we have a substitution 1 in Γ→Γ and a composition operator σδ in Θ→Γ if δ is in Θ→Δ and σ in Δ→Γ. Furthermore we should have σ1=1σ=σ and (σδ)θ=σ(δθ) if θ:Θ1→Θ.

Models are sometimes presented by giving a class of special maps (fibrations), where a type are modelled by a fibration and elements by a section of this fibration. In our case, the fibrations are the maps p in Γ.A→Γ, and the sections of these fibrations correspond exactly to elements in Elem(Γ,A). Any element a Elem(Γ,A) defines a section ⟨a⟩=(1,a):Γ→Γ.A and any such section is of this form.

We assume to have global elements Un in Typen+1(Γ) such that Typen(Γ)=Elem(Γ,Un).

Given a model of type theory M as defined above, we describe how to build a new associated “reducibility” model M∗. When applied to the initial/term model M0, this gives a proof of canonicity which can be seen as a direct generalization of the argument presented in [19] for Gödel system T. As explained in the introduction, the main novelty here is that we consider a proof-relevant notion of reducibility.

The new collection of context, with the operations →∗, Type∗n,Elem∗ and U∗n and N∗2 define a new model of type theory.

The proof consists in checking that the required equalities hold for the operations we have defined. For instance, we have

When checking the equalities, we only use β,η-conversions at the metalevel.

There is a canonical notion of morphism between two models. For instance, the first projection M∗→M defines a map of models of type theory. As for models of generalized algebraic theories [10], there is an initial model unique up to isomorphism. We define the term model M0 of type theory to be this initial model. As for equational theories, this model can be presented by first-order terms (corresponding to each operations) modulo the equations/conversions that have to hold in any model.

We use freely that we can interpret the language of dependent types (with universes) in any presheaf category [13]. A presheaf F is given by a family of sets F(X) indexed by contexts with restriction maps F(X)→F(Y), u↦uσ if σ:Y→X, satisfying the equations u1=u and (uσ)δ=u(σδ) if δ:Z→Y. A dependent presheaf G over F is a presheaf over the category of elements of F, so it is given by a family of sets G(X,ρ) for ρ in F(X) with restriction maps.

We write V0,V1,… the cumulative sequence of presheaf universes, so that Vn(X) is the set of Un-valued dependent presheaves on the presheaf represented by X.

Typen defines a presheaf over this category, with Typen subpresheaf of Typen+1. We can see Elem as a dependent presheaf over Typen since it determines a collection of sets Elem(X,A) for A in Typen(X) with restriction maps.

If A is in Typen(X) we let Norm(X,A) (resp. Neut(X,A)) be the set of all expressions of type A that are in normal form (resp. neutral). As for Elem, we can see Neut and Norm as dependent types over Typen, and we have

Each context Γ defines a presheaf |Γ| by letting |Γ|(X) be the set of all substitutions i(X)→Γ.

We have a canonical isomorphism between Var(A)→Typen and Elem(A→Un). We can then use this isomorphism to build an operation

Similarly, we can define an operation

While equality might not be decidable in Var(A) (because we use arbitrary renaming as maps in the base category), the product operation is injective: if πAF=πBG in Norm(Un) then A=B in Norm(Un) and F=G in Var([A])→Typen.

The model is similar to the reducibility model and we only explain the main operations.

As before, a context is a pair Γ,Γ′ where Γ is a context of M and Γ′ is a dependent family over |Γ|.

The intuition behind this definition is that it is a “proof-relevant” way to express the method of reducibility used for proving normalization [11]: a reducibility predicate has to contain all neutral terms and only normalizable terms. The function α (resp. β) is closely connected to the “reify” (resp. “reflect”) function used in normalization by evaluation [5], but for a “glued” model.