In clinical trials, studies often present longitudinal data or clustered data. These studies are commonly analyzed using linear mixed models (LMMs), usually considering Gaussian assumptions for random effect and error terms. Recently, several proposals extended the restrictive assumptions from traditional LMM by more flexible ones that can accommodate skewness and heavy-tails and consequently are more robust to outliers. This work proposes a canonical fundamental skew-t linear mixed model (ST-LMM), that allows for asymmetric and heavy-tailed random effects and errors and includes several important cases as special cases, which are presented and considered for model selection. For this robust and flexible model, we present an efficient EM-type algorithm for parameter estimation via maximum likelihood, implemented in a closed form by exploring the hierarchical representation of the ST-LMM. In addition, the estimation of standard errors and random effects is discussed. The methodology is illustrated through an application to schizophrenia data and some simulation studies. 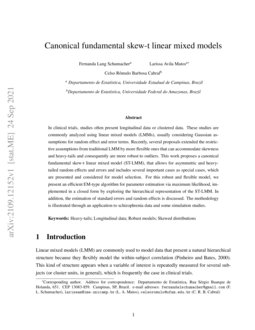 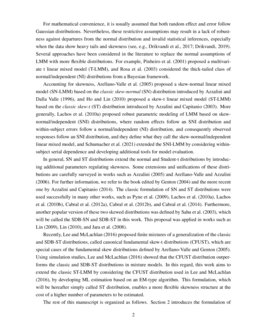 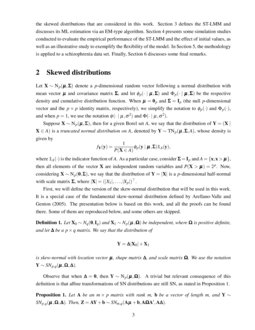 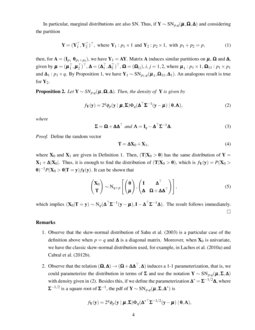 Linear mixed models (LMM) are commonly used to model data that present a natural hierarchical structure because they flexibly model the within-subject correlation (Pinheiro and Bates, 2000). This kind of structure appears when a variable of interest is repeatedly measured for several subjects (or cluster units, in general), which is frequently the case in clinical trials.

For mathematical convenience, it is usually assumed that both random effect and error follow Gaussian distributions. Nevertheless, these restrictive assumptions may result in a lack of robustness against departures from the normal distribution and invalid statistical inferences, especially when the data show heavy tails and skewness

The rest of this manuscript is organized as follows. Section 2 introduces the formulation of the skewed distributions that are considered in this work. Section 3 defines the ST-LMM and discusses its ML estimation via an EM-type algorithm. Section 4 presents some simulation studies conducted to evaluate the empirical performance of the ST-LMM and the effect of initial values, as well as an illustrative study to exemplify the flexibility of the model. In Section 5, the methodology is applied to a schizophrenia data set. Finally, Section 6 discusses some final remarks.

be the respective density and cumulative distribution function. When

Suppose X∼Np(μ,Σ), then for a given Borel set A, we say that the distribution of Y=(X∣X∈A) is a truncated normal distribution on A, denoted by Y∼TNp(μ,Σ,A), whose density is given by

where 1A(⋅) is the indicator function of A. As a particular case, consider Σ=Ip and A={x;x>μ}, then all elements of the vector X

are independent random variables and

Let X0∼Nq(0,Iq) and X1∼Np(μ,Ω) be independent, where Ω is positive definite, and let Δ be a p×q matrix. We say that the distribution of

is skew-normal with location vector μ, shape matrix Δ, and scale matrix Ω. We use the notation Y∼SNp,q(μ,Ω,Δ).

Observe that when Δ=0, then Y∼Np(μ,Ω). A trivial but relevant consequence of this definition is that affine transformations of SN distributions are still SN, as stated in Proposition 1.

In particular, marginal distributions are also SN. Thus, if Y∼SNp,q(μ,Ω,Δ) and considering the partition

The mean vector and covariance matrix of a random vector with SN distribution are given in Proposition 3. The proof is a direct consequence of Definition 1 and the fact that if a random variable has a univariate half-normal distribution with scale parameter 1, then its mean value is √2/π. We define the q-dimensional vector of ones by 1q=(1,…,1)⊤.

Let Y∼\em tp(μ,Σ,ν) and consider the partition given in (1) and the induced partitions of μ and Σ. It can be shown that:

denotes a Gamma distribution with mean

a/b2, with b>0. Let μ be a vector of constants of length p. We say that the distribution of Y=μ+U−1/2X is skew-t (ST) with location vector μ, scale matrix Ω, shape matrix Δ, and νdegrees of freedom. We use the notation Y∼STp,q(μ,Ω,Δ,ν).

In what follows, tp(⋅∣μ,Σ,ν) and Tp(⋅∣μ,Σ,ν) respectively denote the density and the cumulative distribution of the p-variate Student-t distribution with location vector μ, scale matrix Σ and ν degrees of freedom.

If Y∼STp,q(μ,Ω,Δ,ν), then Y has density function

By definitions 1 and 2, we have that

Observe that the distribution of Y is the same as μ+(T|V>0), where T=ΔV+W, and we have

Similar to the SN case, by Definition 2 and Proposition 1, it can be shown that affine transformations of ST distributions are still ST distributed, as stated in the following proposition.

The standard linear mixed model introduced by Laird and Ware (1982) has been a widely used tool to model the correlation within-subjects often present in longitudinal data. In this work, we present a flexible extension of this model.

Suppose that there are N subjects, with the ith subject having ni observations, then a linear mixed model can be written as

where iid∼ denotes independent and identically distributed random vectors. Thus, we have that E[bi]=0, according to (7). Moreover, from Proposition 6, we have the following stochastic representation of the complete data model

with Ψi=ZiDZ⊤i+Ωi. Hence, the marginal pdf of Yi is

where θ=(β⊤,ϕ⊤,α⊤,δ⊤,ν)⊤. Since the observed log-likelihood function involves complex expressions, it is very computationally expensive to work directly with ℓ(θ|y) to find the ML estimates of θ. Hence, in the following subsection, we discuss the development of an EM-type algorithm (Dempster et al., 1977) for ML estimation.

From the hierarchical representation given in (10)–(13) and treating b=(b⊤1,…,b⊤N)⊤, s=(s1,…,sN)⊤ and u=(u1,…,uN)⊤ as hypothetical missing data, we propose to use the ECME algorithm (Liu and Rubin, 1994) for parameter estimation. Let the augmented data set be yc=(y⊤,b⊤,s⊤,u⊤)⊤, where y=(y⊤1,…,y⊤N)⊤, then the complete-data log-likelihood function ℓc(θ|yc)=∑Ni=1ℓi(θ|yc) is given by

where K(ν|u,s) is a function that depends on the parameter vector θ only through ν.

Given the current value θ=ˆθ(k), the E-step of an EM-type algorithm evaluates ˆQ(k)(θ)=E{ℓc(θ|yc)∣ˆθ(k),y}=∑ni=1ˆQ(k)i(θ), where the expectation is taken with respect to the joint conditional distribution of b, s, and u, given y and ˆθ. Therefore, we can write

From the representation given in (10)–(13), using properties from conditional expectation and after some algebra, omitting the supra-index (k), the expressions above can be written as:

with TTr(μ,Σ,ν;A) denoting a Student-t distribution truncated on A

, and its moments can be computed using the