Can GAN Learn Topological Features of a Graph?

This paper is first-line research expanding GANs into graph topology analysis. By leveraging the hierarchical connectivity structure of a graph, we have demonstrated that generative adversarial networks (GANs) can successfully capture topological features of any arbitrary graph, and rank edge sets by different stages according to their contribution to topology reconstruction. Moreover, in addition to acting as an indicator of graph reconstruction, we find that these stages can also preserve important topological features in a graph. 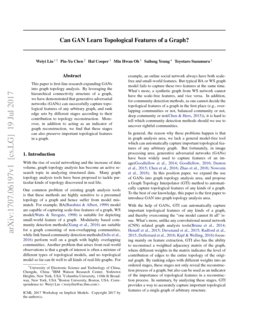 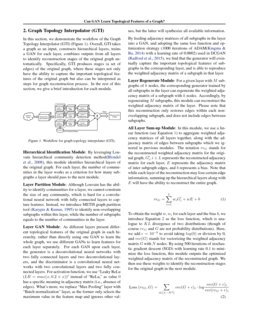 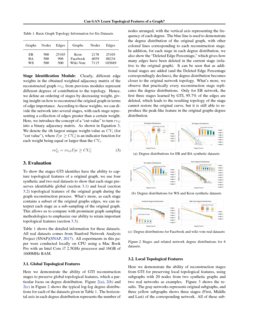 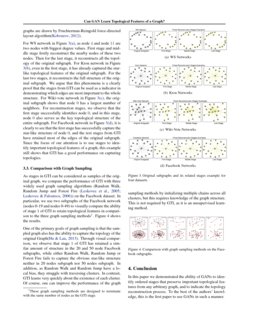 One common problem of existing graph analysis tools is that these methods are highly sensitive to a presumed topology of a graph and hence suffer from model mismatch. For example, BABarabási & Albert (1999) model are capable of capturing scale-free features of a graph, WS modelWatts & Strogatz (1998) is suitable for depicting small-world feature of a graph. Modularity based community detection methodsXiang et al. (2016) are suitable for a graph consisting of non-overlapping communities, while link based community detection methodsDelis et al. (2016) perform well on a graph with highly overlapping communities. Another problem that arises from real-world observations is that a graph of interest is often a mixture of different types of topological models, and no topological model so far can fit well to all kinds of real-life graphs. For example, an online social network always have both scale-free and small-world features. But typical BA or WS graph model fails to capture these two features at the same time. What’s more, a synthetic graph from WS network cannot have the scale-free features, and vice versa. In addition, for community detection methods, as one cannot decide the topological features of a graph in the first place (e.g., overlapping communities or not, balanced community or not, deep community or notChen & Hero (2015)), it is hard to tell which community detection methods should we use to uncover rightful communities.

In general, the reason why these problems happen is that in graph analysis area, we lack a general model-free tool which can automatically capture important topological features of any arbitrary graph. But fortunately, in image processing area, generative adversarial networks (GANs) have been widely used to capture features of an imageGoodfellow et al. (2014); Goodfellow (2016); Denton et al. (2015); Chen et al. (2016); Zhao et al. (2016); Nowozin et al. (2016)

With the help of GANs, GTI can automatically capture important topological features of any kinds of a graph, and thereby overcoming the “one model cannot fit all” issue. What’s more, unlike any convolutional neural network (CNN) related graph analysis tools

Bruna et al. (2014); Henaff et al. (2015); Duvenaud et al. (2015); Radford et al. (2015); Defferrard et al. (2016); Kipf & Welling (2016) focusing mainly on feature extraction, GTI also has the ability to reconstruct a weighted adjacency matrix of the graph, where different weights in the matrix indicates the level of contribution of edges to the entire topology of the original graph. By ranking edges with different weights into an ordered stages, these stages not only reveal the reconstruction process of a graph, but also can be used as an indicator of the importance of topological features in a reconstruction process. In summary, by analyzing these stages, GTI provides a way to accurately capture important topological features of a single graph of arbitrary structure.

In this section, we demonstrate the workflow of the Graph Topology Interpolator (GTI) (Figure 1). Overall, GTI takes a graph as an input, constructs hierarchical layers, trains a GAN for each layer, combines outputs from all layers to identify reconstruction stages of the original graph automatically. Specifically, GTI produces stages (a set of edges) of the original graph, where these stages not only have the ability to capture the important topological features of the original graph but also can be interpreted as steps for graph reconstruction process. In the rest of this section, we give a brief introduction for each module.

Hierarchical Identification Module: By leveraging Louvain hierarchical community detection methodBlondel et al. (2008), this module identifies hierarchical layers of the original graph. For each layer, the number of communities in the layer works as a criterion for how many subgraphs a layer should pass to the next module.

Layer Partition Module: Although Louvain has the ability to identify communities for a layer, we cannot constrain the size of any community, which is hard for a convolutional neural network with fully connected layers to capture features. Instead, we introduce METIS graph partition tool Karypis & Kumar (1995) to identify non-overlapping subgraphs within this layer, while the number of subgraphs equals to the number of communities in the layer.

has a specific meaning in adjacency matrix (i.e., absence of edges). What’s more, we replace “Max Pooling” layer with “Batch normalization” layer, as the former only selects the maximum value in the feature map and ignores other values, but the latter will synthesize all available information.

By feeding adjacency matrices of all subgraphs in the layer into a GAN, and adopting the same loss function and optimization strategy (1000 iterations of ADAM

Kingma & Ba (2014) with a learning rate of 0.0002) used in DCGAN Radford et al. (2015), we find that the generator will eventually capture the important topological features of subgraphs in the corresponding layer, and is able to reproduce the weighted adjacency matrix of a subgraph in that layer.

Layer Regenerate Module: For a given layer with M subgraphs of k nodes, the corresponding generator trained by all subgraphs in the layer can regenerate the weighted adjacency matrix of a subgraph with k nodes. Accordingly, by regenerating M subgraphs, this module can reconstruct the weighted adjacency matrix of the layer. Please note that this reconstruction only restores edges within each non-overlapping subgraph, and does not include edges between subgraphs.

To obtain the weight w,wi for each layer and the bias b, we introduce Equation 2 as the loss function, which is analogue to KL divergence of two distributions (though of course reG and G

are not probability distributions). Here, we add

nodes. By using 500 iterations of stochastic gradient descent (SGD) with learning rate 0.1 to minimize the loss function, this module outputs the optimized weighted adjacency matrix of the reconstructed graph. We then use these weights to identify the reconstruction stages for the original graph in the next module.

Stage Identification Module: Clearly, different edge weights in the obtained weighted adjacency matrix of the reconstructed graph reG from previous modules represent different degrees of contribution to the topology. Hence, we define an ordering of stages by decreasing weight, giving insight on how to reconstruct the original graph in terms of edge importance. According to these weights, we can divide the network into several stages, with each stage representing a collection of edges greater than a certain weight. Here, we introduce the concept of a “cut-value” to turn reG into a binary adjacency matrix. As shown in Equation 3, We denote the ith largest unique weight-value as CVi (for “cut value”), where I[w≥CVi] is an indicator function for each weight being equal or larger than the CVi.

Table 1 shows the detailed information for these datasets. All real datasets comes from Stanford Network Analysis Project (SNAP)SNAP (2017). All experiments in this paper were conducted locally on CPU using a Mac Book Pro with an Intel Core i7 2.5GHz processor and 16GB of 1600MHz RAM.

Here we demonstrate the ability of reconstruction stages from GTI for preserving local topological features, using subgraphs with 20 nodes from two synthetic graphs and two real networks as examples. Figure 3 shows the results. The gray networks represents original subgraphs, and three yellow subgraphs shows three stages (First, Middle and Last) of the corresponding network. All of these subgraphs are drawn by Fruchterman-Reingold force-directed layout algorithmKobourov (2012).

As stages in GTI can be considered as samples of the original graph, we compare the performance of GTI with three widely used graph sampling algorithms (Random Walk, Random Jump and Forest Fire Leskovec et al. (2005); Leskovec & Faloutsos (2006)) on the Facebook dataset. In particular, we use two subgraphs of the Facebook network (nodes 0-19 and nodes 0-49) to visually compare the ability of stage 1 of GTI to retain topological features in comparison to the three graph sampling methods111These graph sampling methods are designed to terminate with the same number of nodes as the GTI stage.. Figure 4 shows the results.

. Through visual comparison, we observe that stage 1 of GTI has retained a similar amount of structure in the 20 and 50 node Facebook subgraphs, while either Random Walk, Random Jump or Forest Fire fails to capture the obvious star-like structure neither in 20 nodes subgraph nor 50 nodes subgraph. In addition, as Random Walk and Random Jump have a local bias, they struggle with traversing clusters. In contrast, GTI learns very quickly about the existence of each cluster. Of course, one can improve the performance of the graph sampling methods by initializing multiple chains across all clusters, but this requires knowledge of the graph structure. This is not required by GTI, as it is an unsupervised learning method.

In this paper we demonstrated the ability of GANs to identify ordered stages that preserve important topological features from any arbitrary graph, and to indicate the topology reconstruction process. To the best of the authors’ knowledge, this is the first paper to use GANs in such a manner.