The paper briefly introduces multiple classifier systems and describes a new algorithm, which improves classification accuracy by means of recommendation of a proper algorithm to an object classification. This recommendation is done assuming that a classifier is likely to predict the label of the object correctly if it has correctly classified its neighbors. The process of assigning a classifier to each object is based on Formal Concept Analysis. We explain the idea of the algorithm with a toy example and describe our first experiments with real-world datasets. 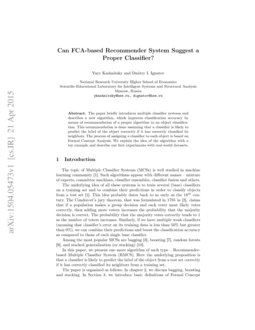 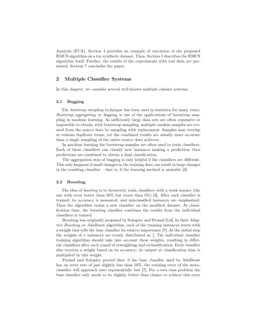 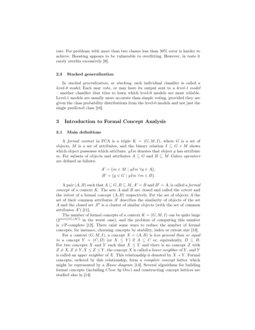 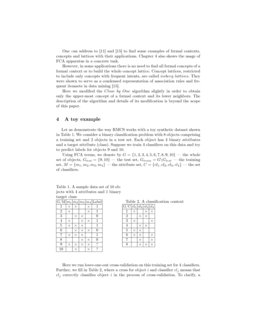 Formal Guarantees on the Robustness of a Classifier against Adversarial Manipulation

An Experiment with Bands and Dimensions in Classifiers

. This idea probably dates back to as early as the 18

th century. The Condorcet’s jury theorem, that was formulated in 1785 in [2], claims that if a population makes a group decision and each voter most likely votes correctly, then adding more voters increases the probability that the majority decision is correct. The probability that the majority votes correctly tends to 1 as the number of voters increases. Similarly, if we have multiple weak classifiers (meaning that classifier’s error on its training data is less than 50% but greater than 0%), we can combine their predictions and boost the classification accuracy as compared to those of each single base classifier.

Among the most popular MCSs are bagging [3], boosting [7]

In this paper, we present one more algorithm of such type – Recommender-based Multiple Classifier System (RMCS). Here the underlying proposition is that a classifier is likely to predict the label of the object from a test set correctly if it has correctly classified its neighbors from a training set.

The paper is organized as follows. In chapter 2, we discuss bagging, boosting and stacking. In Section 3, we introduce basic definitions of Formal Concept Analysis (FCA). Section 4 provides an example of execution of the proposed RMCS algorithm on a toy synthetic dataset. Then, Section 5 describes the RMCS algorithm itself. Further, the results of the experiments with real data are presented. Section 7 concludes the paper.

In this chapter, we consider several well-known multiple classier systems.

The bootstrap sampling technique has been used in statistics for many years. Bootstrap aggregating, or bagging, is one of the applications of bootstrap sampling in machine learning. As sufficiently large data sets are often expensive or impossible to obtain, with bootstrap sampling, multiple random samples are created from the source data by sampling with replacement. Samples may overlap or contain duplicate items, yet the combined results are usually more accurate than a single sampling of the entire source data achieves.

In machine learning the bootstrap samples are often used to train classifiers. Each of these classifiers can classify new instances making a prediction; then predictions are combined to obtain a final classification.

The aggregation step of bagging is only helpful if the classifiers are different. This only happens if small changes in the training data can result in large changes in the resulting classifier – that is, if the learning method is unstable [3].

The idea of boosting is to iteratively train classifiers with a weak learner (the one with error better than 50% but worse than 0%) [4]. After each classifier is trained, its accuracy is measured, and misclassified instances are emphasized. Then the algorithm trains a new classifier on the modified dataset. At classification time, the boosting classifier combines the results from the individual classifiers it trained.

Boosting was originally proposed by Schapire and Freund [5, 6]. In their Adaptive Boosting, or AdaBoost, algorithm, each of the training instances starts with a weight that tells the base classifier its relative importance [7]. At the initial step the weights of n instances are evenly distributed as 1n The individual classifier training algorithm should take into account these weights, resulting in different classifiers after each round of reweighting and reclassification. Each classifier also receives a weight based on its accuracy; its output at classification time is multiplied by this weight.

Freund and Schapire proved that, if the base classifier used by AdaBoost has an error rate of just slightly less than 50%, the training error of the meta-classifier will approach zero exponentially fast [7]. For a two-class problem the base classifier only needs to be slightly better than chance to achieve this error rate. For problems with more than two classes less than 50% error is harder to achieve. Boosting appears to be vulnerable to overfitting. However, in tests it rarely overfits excessively [8].

In stacked generalization, or stacking, each individual classifier is called a level-0 model. Each may vote, or may have its output sent to a level-1 model

– another classifier that tries to learn which level-0 models are most reliable. Level-1 models are usually more accurate than simple voting, provided they are given the class probability distributions from the level-0 models and not just the single predicted class

A formal context in FCA is a triple K=(G,M,I), where G is a set of objects, M is a set of attributes, and the binary relation I⊆G×M shows which object possesses which attribute. gIm denotes that object g has attribute m. For subsets of objects and attributes A⊆G and B⊆M Galois operators are defined as follows:

For a context (G,M,I), a concept X=(A,B) is less general than or equal to a concept Y=(C,D) (or X≤Y) if A⊆C or, equivalently, D⊆B. For two concepts X and Y such that X≤Y and there is no concept Z with Z≠X,Z≠Y,X≤Z≤Y, the concept X is called a lower neighbor of Y, and Y is called an upper neighbor of X. This relationship is denoted by X≺Y. Formal concepts, ordered by this relationship, form a complete concept lattice which might be represented by a Hasse diagram [14]. Several algorithms for building formal concepts (including Close by One) and constructing concept lattices are studied also in [14].

One can address to [11] and [15] to find some examples of formal contexts, concepts and lattices with their applications. Chapter 4 also shows the usage of FCA apparatus in a concrete task.

However, in some applications there is no need to find all formal concepts of a formal context or to build the whole concept lattice. Concept lattices, restricted to include only concepts with frequent intents, are called iceberg lattices. They were shown to serve as a condensed representation of association rules and frequent itemsets in data mining [15].

Here we modified the Close by One algorithm slightly in order to obtain only the upper-most concept of a formal context and its lower neighbors. The description of the algorithm and details of its modification is beyond the scope of this paper.

Let us demonstrate the way RMCS works with a toy synthetic dataset shown in Table 2. We consider a binary classification problem with 8 objects comprising a training set and 2 objects in a test set. Each object has 4 binary attributes and a target attribute (class). Suppose we train 4 classifiers on this data and try to predict labels for objects 9 and 10.

Let us consider Table 2 as a formal context with objects G and attributes C (so now classifiers play the role of attributes). We refer to it as classification context. The concept lattice for this context is presented in Fig. 1.

As it was mentioned, the number of formal concepts of a context K= (G,M,I) can be exponential in the worst case. But for the toy example it is possible to draw the whole lattice diagram. Thankfully, we do not need to build the whole lattice in RMCS algorithm — we only keep track of its top concepts.

To classify objects from Gtest, we first find their k nearest neighbors from Gtrain according to some distance metric. In this case, we use k=3 and Hamming distance. In these conditions, we find that three nearest neighbors of object 9 are 4, 5 and 7, while those of object 10 are 1, 6 and 8.

Then, we take these sets of nearest neighbors Neighb9={4,5,7} and Nieghb10={1,6,8}, and find maximal intersections of these sets with the extents of formal concepts presented above (ignoring the concept (G,∅)). The intents (i.e. classifiers) of the corresponding concepts are given as recommendations for the objects from Gtest. The procedure is summarized in Table 3.

Finally, the RMCS algorithm predicts the same labels for objects 9 and 10 as classifiers cl2 and cl4 do correspondingly.

In this section, we discuss the Recommender-based Multiple Classifier System (RMCS). The pseudocode of the RMCS algorithm is presented in the listing Algorithm 1.

The inputs for the algorithm are the following:

The algorithm includes the following steps:

We used four UCI datasets in these experiments - mushrooms, ionosphere, digits, and nursery.111http://archive.ics.uci.edu/ml/datasets Each of the datasets was divided into training and test sets in proportion 70:30.

(written in Python) which served as base classifiers for the RMCS algorithm as well. These were a Support Vector Machine with Gaussian kernel (

The classification accuracy of each classifier on each dataset is presented in Table 4 along with special settings of parameters. Moreover, for comparison, the results for Scikit’s implementation of bagging with SVM as a base classifier and AdaBoost on decision stumps 333https://github.com/pbharrin/machinelearninginaction/tree/master/Ch07 are presented.

As we can see, RMCS outperformed its base classifiers in all cases, while it turned out to be better than bagging only in case of multi-class classification problems (datasets digits and nursery).

Our further work on the algorithm will continue in the following directions: exploring the impact of different distance metrics (such as the one based on attribute importance or information gain) on the algorithm’s performance, experimenting with various types of base classifiers, investigating the conditions preferable for RMCS (in particular, when it outperforms bagging and boosting), improving execution time of the algorithm and analyzing RMCS’s overfitting.

The authors would like to thank their colleague from Higher School of Economics, Sergei Kuznetsov, Jaume Baixeries and Konstantin Vorontsov for their inspirational discussions which directly or implicitly influenced this study.