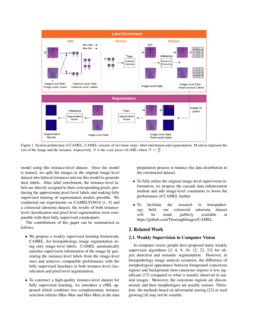 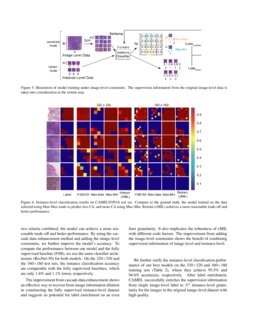 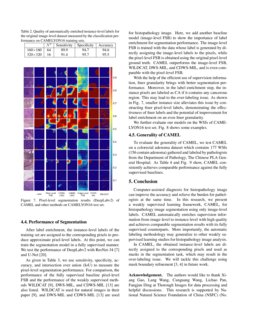 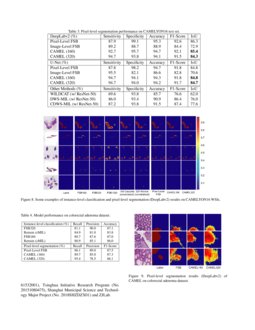 Histopathology image analysis is the gold standard for cancer detection and diagnosis. In recent years, the development of deep neural network has achieved many breakthroughs in automatic histopathology image classification and segmentation

[15, 18, 19]. These methods highly depend on the availability of a large number of pixel-level labels, which are labor-intensive and time-consuming to obtain.

The contributions of this paper can be summarized as follows:

In computer vision, people have proposed many weakly supervised algorithms

[3, 4, 9, 10, 12, 22, 23] for object detection and semantic segmentation. However, in histopathology image analysis scenarios, the difference of morphological appearance between foreground (cancerous region) and background (non-cancerous region) is less significant [17] compared to what is usually observed in natural images. Moreover, the cancerous regions are disconnected, and their morphologies are usually various. Therefore, the methods based on adversarial erasing [22] or seed growing [4] may not be suitable.

MIL is widely applied in most weakly supervised methodologies [13, 25, 26]. However, despite the great success of MIL, many solutions need pre-specified features [21, 26], which require data specific prior knowledge and limit the general applications. Instead of using pre-specified features, Xu et al. [25]

, the classifier in CAMEL does not need pre-training and thus increases the flexibility in choosing the network architecture.

We introduce a new solution called combined Multiple Instance Learning (cMIL). The image is split into N×N latticed instances with equal size. Here, we consider the instances from the same image as in the same bag. In cMIL, two MIL-based classifiers with different instance selection criteria (Max-Max and Max-Min) are used to select instances to construct the instance-level dataset (Fig. 2). The selected instance can be considered as the representative of its corresponding image, which determines the image class (similar to the attention mechanism [24]).

If the image has a cancerous (CA) region, we can reason that at least one instance is cancerous. On the other hand, if the label of the image is non-cancerous (NC), all the instances in it are non-cancerous. For both CA and NC images, Max-Max selects the instance with maximum CA response. As shown in Fig. 3(a) and (b), during the training stage, in NC region, the Max-Max criterion will select the instance with maximum CA response, which has the highest similarity with CA, as the NC example. Therefore, the model trained with these data would give a decision boundary toward the CA direction, and this would lead to misclassification of CA instances with lower responses (as shown by light red circles). For example, CA instances with similar morphological appearances to NC may get misclassified. Max-Min acts as a countermeasure that selects the instances with the highest CA response for CA images and the instances with the lowest response for NC images. As shown in Fig. 3(c), Max-Min tends to have an opposite effect compared to Max-Max. Therefore, in cMIL we combine these two criteria to reduce the distribution deviation problem and obtain a more balanced instance-level dataset to be used in fully supervised learning (see Fig. 3(d)). It is worth noting that, for NC images, although each instance is NC, we only use the selected instances to avoid the data imbalance problem.

We choose ResNet-50 [11] as the classifier. The two MIL-based classifiers are trained separately under the same configuration (Fig. 2

where ^pj=Scriterion({f(bi)}), bi is instances in image j, f is the classifier, Scriterion∈ {Max-Max, Max-Min}. Scriterion selects the target instance using the defined criterion, yj is the image-level label.

After training, we again feed the same training data into the two trained classifiers and select the instances under the corresponding criterion, then the predictions are considered as their labels. We combine the instances selected by the two trained classifiers to construct the final fully supervised instance-level dataset. Noted that we discard those potentially confusing samples whose predicted labels are different from their corresponding image-level labels.

Once the instance-level dataset is prepared, we are able to train an instance classifier in a fully supervised manner. The classifier we use in this step has the same architecture as the classifier in cMIL (ResNet-50), we name this step as retrain. Then, we split the original image into latticed instances and relabel them using the trained instance-level classification model (Fig. 1). For each image, we obtain N2 high-quality instance labels from a single image-level label.

With enriched supervision information, the instance-level labels are directly assigned to the corresponding pixels, producing approximate pixel-level labels. Therefore, we can train segmentation models in a fully supervised way using well-developed architectures such as DeepLabv2 [6, 7] and U-Net [20]. To prevent the model from learning the checkboard-like artifacts in the approximate labels, in the training process, we perform data augmentation by feeding smaller images that are randomly cropped from the original training set and their corresponding masks into the segmentation model.

The granularity of the enriched labels is determined by the scale factor N; larger scale factor results in finer labels. However, as a tradeoff, larger scale factor would lead to severe image information loss. To tackle this issue, we propose cascade data enhancement to recover the potential loss and add image-level constraints to make better use of the supervision information.

where w1 and w2 are the weights of the two losses. We set w1=w2 in our experiments.

where ^yj=g(nj), nj represents the input instance, g is the retrain route, and yj is the instance-level label. Since two routes share the same network, we have f≡g.

We applied rotation, mirroring, and scaling (between 1.0x and 1.2x) at random to augment the training data. All the models were implemented in TensorFlow

As Table 1 and Fig. 6 show, in accordance with Fig. 3, models trained on data selected using Max-Max tends to have relatively low sensitivity and high specificity. On the contrary, Max-Min tends to help achieve relatively high sensitivity and low specificity. With the data selected with the two criteria combined, the model can achieve a more reasonable trade-off and better performance. By using the cascade data enhancement method and adding the image-level constraints, we further improve the model’s accuracy. To compare the performance between our model and the fully supervised baseline (FSB), we use the same classifier architecture (ResNet-50) for both models. On the 320×320 and the 160×160 test sets, the instance classification accuracy are comparable with the fully supervised baselines, which are only 1.6% and 1.1% lower, respectively.

The improvement from cascade data enhancement shows an effective way to recover from image information dilation in constructing the fully supervised instance-level dataset and suggests its potential for label enrichment on an even finer granularity. It also implicates the robustness of cMIL with different scale factors. The improvement from adding the image-level constraints shows the benefit of combining supervision information of image-level and instance-level.

We further verify the instance-level classification performance of our best models on the 320×320 and 160×160 training sets (Table 2), where they achieve 95.5% and 94.6% accuracies, respectively. After label enrichment, CAMEL successfully enriches the supervision information from single image-level label to N2 instance-level granularity for the images in the original image-level dataset with high quality.

After label enrichment, the instance-level labels of the training set are assigned to the corresponding pixels to produce approximate pixel-level labels. At this point, we can train the segmentation model in a fully supervised manner. We test the performance of DeepLabv2 with ResNet-34 [7] and U-Net [20].

With the help of the efficient use of supervision information, finer granularity brings with better segmentation performance. Moreover, in the label enrichment step, the instance pixels are labeled as CA if it contains any cancerous region. This may lead to the over-labeling issue. As shown in Fig. 7, smaller instance size alleviates this issue by constructing finer pixel-level labels, demonstrating the effectiveness of finer labels and the potential of improvement for label enrichment on an even finer granularity.

We further evaluate our models on the WSIs of CAMELYON16 test set. Fig. 8 shows some examples.

To evaluate the generality of CAMEL, we test CAMEL on a colorectal adenoma dataset which contains 177 WSIs (156 contain adenoma) gathered and labeled by pathologists from the Department of Pathology, The Chinese PLA General Hospital. As Table 4 and Fig. 9 show, CAMEL consistently achieves comparable performance against the fully supervised baselines.

In CAMEL, the obtained instance-level labels are directly assigned to the corresponding pixels and used as masks in the segmentation task, which may result in the over-labeling issue. We will tackle this challenge using mask boundary refinement [3, 4] in future work.