We show that call-by-need is observationally equivalent to weak-head needed reduction. The proof of this result uses a semantical argument based on a (non-idempotent) intersection type system called V. Interestingly, system V also allows to syntactically identify all the weak-head needed redexes of a term. 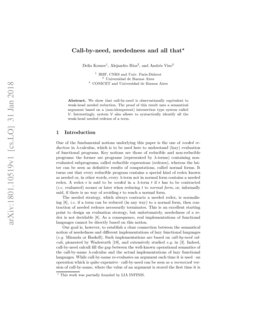 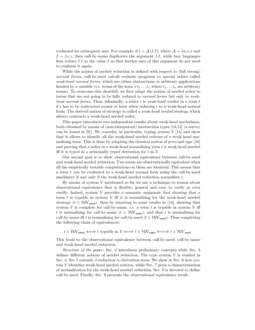 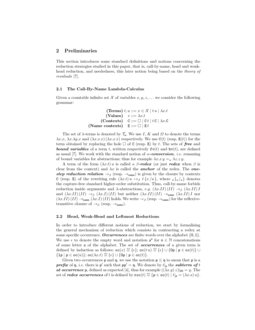 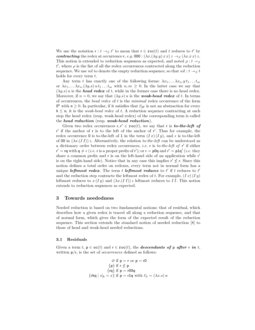 One of the fundamental notions underlying this paper is the one of needed reduction in λ-calculus, which is to be used here to understand (lazy) evaluation of functional programs. Key notions are those of reducible and non-reducible programs: the former are programs (represented by λ-terms) containing non-evaluated subprograms, called reducible expressions (redexes), whereas the latter can be seen as definitive results of computations, called normal forms. It turns out that every reducible program contains a special kind of redex known as needed or, in other words, every λ-term not in normal form contains a needed redex. A redex r is said to be needed in a λ-term t if r has to be contracted (i.e. evaluated) sooner or later when reducing t to normal form, or, informally said, if there is no way of avoiding r to reach a normal form.

The needed strategy, which always contracts a needed redex, is normalising [BarendregtKKS87], i.e. if a term can be reduced (in any way) to a normal form, then contraction of needed redexes necessarily terminates. This is an excellent starting point to design an evaluation strategy, but unfortunately, neededness of a redex is not decidable [BarendregtKKS87]. As a consequence, real implementations of functional languages cannot be directly based on this notion.

Our goal is, however, to establish a clear connection between the semantical notion of neededness and different implementations of lazy functional languages (e.g. Miranda or Haskell). Such implementations are based on call-by-need calculi, pioneered by Wadsworth [Wadsworth:thesis], and extensively studied e.g. in [AriolaFMOW95]. Indeed, call-by-need calculi fill the gap between the well-known operational semantics of the call-by-name λ-calculus and the actual implementations of lazy functional languages. While call-by-name re-evaluates an argument each time it is used –an operation which is quite expensive– call-by-need can be seen as a memoized version of call-by-name, where the value of an argument is stored the first time it is evaluated for subsequent uses. For example, if t=Δ(II), where Δ=λx.xx and I=λz.z, then call-by-name duplicates the argument II, while lazy languages first reduce II to the value I so that further uses of this argument do not need to evaluate it again.

This section introduces some standard definitions and notions concerning the reduction strategies studied in this paper, that is, call-by-name, head and weak-head reduction, and neededness, this later notion being based on the theory of residuals [Barendregt84].

Given a countable infinite set X of variables x,y,z,… we consider the following grammar:

The set of λ-terms is denoted by Ta. We use I, K and Ω to denote the terms λx.x, λx.λy.x and (λx.xx)(λx.xx) respectively. We use C⟨t⟩ (resp. E⟨t⟩) for the term obtained by replacing the hole □ of C (resp. E) by t. The sets of free and bound variables of a term t, written respectively fv(t) and bv(t), are defined as usual [Barendregt84]. We work with the standard notion of α-conversion, i.e. renaming of bound variables for abstractions; thus for example λx.xy=αλz.zy.

A term of the form (λx.t)u is called a β-redex (or just redex when β is clear from the context) and λx is called the anchor of the redex. The one-step reduction relation →β (resp. →name) is given by the closure by contexts C (resp. E) of the rewriting rule (λx.t)u↦βt{x/u}, where _{_/_} denotes the capture-free standard higher-order substitution. Thus, call-by-name forbids reduction inside arguments and λ-abstractions, e.g. (λx.II)(II)→β(λx.II)I and (λx.II)(II)→β(λx.I)(II) but neither (λx.II)(II)→name(λx.II)I nor (λx.II)(II)→name(λx.I)(II) holds. We write ↠β (resp. ↠name) for the reflexive-transitive closure of →β (resp. →name).

Given two occurrences p and q, we use the notation p≤q to mean that p is a prefix of q, i.e. there is p′ such that pp′=q. We denote by t|p the subterm of t at occurrence p, defined as expected [BaaderN98], thus for example ((λx.y)z)|00=y. The set of redex occurrences of t is defined by . We use the notation r:t→βt′ to mean that r∈roc(t) and t reduces to t′ by contracting the redex at occurrence r, e.g. 000:(λx.(λy.y)xx)z→β(λx.xx)z. This notion is extended to reduction sequences as expected, and noted ρ:t↠βt′, where ρ is the list of all the redex occurrences contracted along the reduction sequence. We use nil to denote the empty reduction sequence, so that nil:t↠βt holds for every term t.

Given a term t, p∈oc(t) and r∈roc(t), the descendants of p after r in t, written p/r, is the set of occurrences defined as follows:

Stability of the to-the-left relation makes use of the notion of residual:

By induction on the length of ρ using Lem. 1. ∎

The expected result of evaluating a program is specified by means of some appropriate notion of normal form. Given any relation →R, a term t is said to be in R-normal form (NFR) iff there is no t′ such that t→Rt′. A term t is R-normalising (WNR) iff there exists u∈NFR such that t↠Ru. Thus, given an R-normalising term t, we can define the set of R-normal forms of t as nfR(t)\raisebox−1.0pt$\tiny{def}=${t′∣t↠Rt′∧t′∈NFR}.

Last, any term in β-normal form (NFβ) has the form λx1.…λxn.xt1…tm (n,m≥0) where t1,…,tm are themselves in β-normal form. It is well-known that the set nfβ(t) is a singleton, so we may use it either as a set or as its unique element.

Notice in particular that nfβ(t)=∅ (resp. hnfβ(t)=∅ or whnfβ(t)=∅) implies every redex in t is needed (resp. head needed or weak-head needed).

For instance, consider the reduction sequence:

which is needed but not head needed, since redex r1 might not be contracted to reach a head normal form:

Moreover, this second reduction sequence is head needed but not weak-head needed since only redex r3 is needed to get a weak-head normal form:

Since the existing proof [BarendregtKKS87] does not extend to weak-head normal forms, we give here an alternative argument which does not only cover the standard case of needed reduction but also the new ones of head and weak-head reductions.

In this section we recall the (non-idempotent) intersection type system V [Kesner16] –an extension of those in [Gardner94, Carvalho:thesis]– used here to characterise normalising terms w.r.t. the weak-head strategy. More precisely, we show that t is typable in system V if and only if t is normalising when only weak-head needed redexes are contracted. This characterisation is used in Sec. 9 to conclude that the weak-head needed strategy is observationally equivalent to the call-by-need calculus (to be introduced in Sec. 8).

Given a constant type a that denotes answers and a countable infinite set B of base type variables α,β,γ,…, we define the following sets of types:

The empty multiset is denoted by {{}}. We remark that types are strict [Bakel92], i.e. the right-hand sides of functional types are never multisets. Thus, the general form of a type is M1→…→Mn→τ with τ being the constant type or a base type variable.

Type judgements have the form Γ⊢t:τ, where Γ is a typing context, t is a term and τ is a type. The intersection type system V for the λ-calculus is given in Fig. 1.

The constant type a in rule (val) is used to type values. The axiom (ax) is relevant (there is no weakening) and the rule (→e) is multiplicative. Note that the argument of an application is typed #(I) times by the premises of rule (→e). A particular case is when I=∅: the subterm u occurring in the typed term tu turns out to be untyped.

A (type) derivation is a tree obtained by applying the (inductive) typing rules of system V. The notation ⊳VΓ⊢t:τ means there is a derivation of the judgement Γ⊢t:τ in system V. The term t is typable in system V, or V-typable, iff t is the subject of some derivation, i.e. iff there are Γ and τ such that ⊳VΓ⊢t:τ. We use the capital Greek letters Φ,Ψ,… to name type derivations, by writing for example Φ⊳VΓ⊢t:τ. For short, we usually denote with Φt a derivation with subject t for some type and context. The size of the derivation Φ, denoted by sz(Φ), is defined as the number of nodes of the corresponding derivation tree. We write RULE(Φ)∈{(ax),(→i),(→e)} to access the last rule applied in the derivation Φ. Likewise, PREM(Φ) is the multiset of proper maximal subderivations of Φ. For instance, given

we have RULE(Φ)=(→e) and PREM(Φ)={{Φt}}⊔{{Φiu∣i∈I}}. We also use functions CTXT(Φ), SUBJ(Φ) and TYPE(Φ) to access the context, subject and type of the judgement in the root of the derivation tree respectively. For short, we also use notation Φ(x) to denote the type associated to the variable x in the typing environment of the conclusion of Φ (i.e. Φ(x)\raisebox−1.0pt$\tiny{def}=$CTXT(Φ)(x)).

Intersection type systems can usually be seen as models [CoppoD80], i.e. typing is stable by convertibility: if t is typable and t=βt′, then t′ is typable too. This property splits in two different statements known as subject reduction and subject expansion respectively, the first one giving stability of typing by reduction, the second one by expansion. In the particular case of non-idempotent types, subject reduction refines to weighted subject-reduction, stating that not only typability is stable by reduction, but also that the size of type derivations is decreasing. Moreover, this decrease is strict when reduction is performed on special occurrences of redexes, called typed occurrences. We now introduce all these concepts.

Given a type derivation Φ, the set TOC(Φ) of typed occurrences of Φ, which is a subset of oc(SUBJ(Φ)), is defined by induction on the last rule of Φ.

The weak-head redex of a typed term is always a typed occurrence.

For convenience we introduce an alternative way to denote type derivations. We refer to AX(x,τ) as the result of applying (ax) with subject x and type τ:

We denote with VAL(x,t) the result of applying (val) abstracting x and term t:

We refer to ABS(x,Φt) as the result of applying (→i) with premise Φt and abstracting variable x:

Likewise, we write APP(Φt,u,(Φiu)i∈I) for the result of applying (→e) with premises Φt and (Φiu)i∈I, and argument u (the argument u is untyped when I=∅). Note that this application is valid provided that TYPE(Φt)={{σi}}i∈I→τ and (TYPE(Φiu)=σi)i∈I. Then:

Given Φ and p∈TOC(Φ), the multiset Φ|p of all the subderivations of Φ at occurrence p is inductively defined as follows:

Given type derivations Φ,(Ψi)i∈I and a position p∈oc(SUBJ(Φ)), replacing the subderivations of Φ at occurrence p by (Ψi)i∈I, written Φ[(Ψi)i∈I]p, is a type derivation inductively defined as follows, assuming #(Φ|p)=#(I) and SUBJ(Ψi)=SUBJ(Ψj) for every i,j∈I (we call s the unique subject of all these derivations):

We can now state the two main properties of system V, whose proofs can be found in Sec. 7 of [BucciarelliKV17].

Note that weighted subject reduction implies that reduction of typed redex occurrences turns out to be normalising.

5 Substitution and Reduction on Derivations

In order to relate typed redex occurrences of convertible terms, we now extend the notion of β-reduction to derivation trees, by making use of a natural and basic concept of typed substitution. In contrast to substitution and β-reduction on terms, these operations are now both non-deterministic on derivation trees (see [Vial:thesis] for discussions and examples). Given a variable x and type derivations Φt and (Φiu)i∈I, the typed substitution of x by (Φiu)i∈I in Φt, written Φt{x/(Φiu)i∈I} by making an abuse of notation, is a type derivation inductively defined on Φt, only if Φt(x)={{TYPE(Φiu)}}i∈I</spa