Calibration of Sobol indices estimates in case of noisy output

This paper presents a simple noise correction method for Sobol' indices estimation. Sobol' indices, especially total Sobol' indices are quite sensitive to the noise in the output and tend to be severly biased (overestimated) if no noise correction is done, which may make their computation meaningless in case of even quite moderate noise levels. Proposed method allows to get approximately unbiased noise free estimation of Sobol' indices at the cost of variance of estimate increase if noise can be represented as a combination of additive and multiplicative stationary noise. impossible to do precise noise correction for more complex noise settings. Proposed method is more straightforward than schemes found in the literature and does not introduce any assumptions on the function and noise distribution (except that it assumes noise to be stationary and be a combination of additive and multiplicative). One of the appealing features is that there is actual analytical noise correction expression derived. 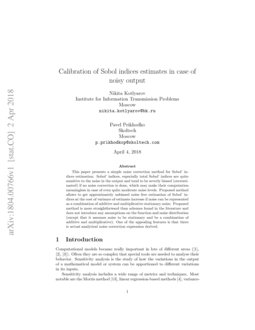 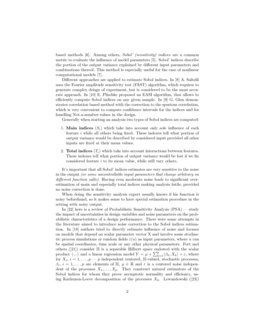 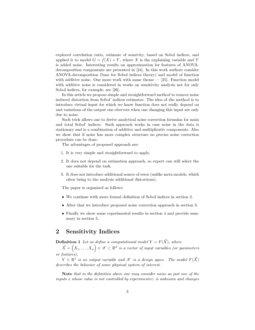 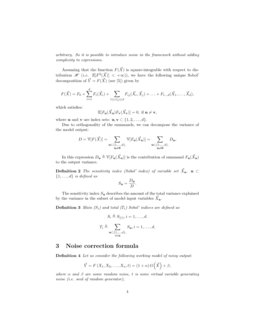 Computational models became really important in lots of different areas ([1], [2], [3]). Often they are so complex that special tools are needed to analyse their behavior. Sensitivity analysis is the study of how the variations in the output of a mathematical model or system can be apportioned to different variations in its inputs.

Sensitivity analysis includes a wide range of metrics and techniques. Most notable are the Morris method [13]

[4], variance-based methods [6]. Among others, Sobol’ (sensitivity) indices are a common metric to evaluate the influence of model parameters [5]. Sobol’ indices describe the portion of the output variance explained by different input parameters and combinations thereof. This method is especially useful for the case of nonlinear computational models [7].

Different approaches are applied to estimate Sobol indices. In [8] A. Saltelli uses the Fourier amplitude sensitivity test (FAST) algorithm, which requires to generate complex deisgn of experiment, but is considered to be the most accurate approach. In [10] E. Plischke proposed an EASI algorithm, that allows to efficiently compute Sobol indices on any given sample. In [9]

G. Glen demonstrates correlation based method with the correction to the spurious correlation, which is very convenient to compute confidence intervals for the indices and for handling Not-a-number-values in the design.

Generally when starting an analysis two types of Sobol indices are computed:

It’s important that all Sobol’ indices estimates are very sensitive to the noise in the output (or some uncontrollable input parameters that change arbitrary on different function calls). Having even moderate noise leads to significant overestimation of main and especially total indices making analysis futile, provided no noise correction is done.

When doing the sensitivity analysis expert usually knows if his function is noisy beforehand, so it makes sense to have special estimation procedure in the setting with noisy output.

In [22] here is a review of Probabilistic Sensitivity Analysis (PSA) — study the impact of uncertainties in design variables and noise parameters on the probabilistic characteristics of a design performance. There were some attempts in the literature aimed to introduce noise correction to the Sobol indices estimation. In [18]

ε(u) as input parameters, where u can be spatial coordinates, time scale or any other physical parameters. Fort and others ([21]) consider H is a separable Hilbert space endowed with the scalar product ⟨⋅,⋅⟩ and a linear regression model Y=μ+∑pk=1⟨βk,Xk⟩+ε, where for Xi, i=1,…,p — p independent centered, H-valued, stochastic processes, βi, i=1,…,p are elements of H, μ∈R and ε is a centered noise independent of the processes X1,…,Xp. They construct natural estimators of the Sobol indices for whom they prove asymptotic normality and efficiency, using Karhunen-Loeve decomposition of the processes Xk. Lewandowski ([23]) explored correlation ratio, estimate of sensivity, based on Sobol indices, and applied it to model G=f(X)+Y, where X is the explaining variable and Y is added noise. Interesting results on approximation for features of ANOVA-decomposition components are presented in [24]. In this work authors consider ANOVA-decomposition (base for Sobol indices theory) and model of function with additive noise. One more work with same theme — [25]. Function model with additive noise is considered in works on sensitivity analysis not for only Sobol indices, for example, see [26].

In this article we propose simple and straightforward method to remove noise induced distortion from Sobol’ indices estimates. The idea of the method is to introduce virtual input for which we know function does not really depend on and variations of the output one obervers when one changing this input are only due to noise.

Such trick allows one to derive analytical noise correction formulas for main and total Sobol’ indices. Such approach works in case noise in the data is stationary and is a combination of additive and multiplicativ components. Also we show that if noise has more complex structure no precise noise correction procedure can be done.

The advantages of proposed approach are:

The paper is organised as follows:

Let us define a computational model Y=F(→X), where

→X=(X1,…,Xn)∈X⊂Rd is a vector of input variables (or parameters or features),

Y∈R1 is an output variable and X is a design space. The model F(→X) describes the behavior of some physical system of interest.

Note that in the definition above one may consider noise as just one of the inputs x whose value is not controlled by experimenter, is unknown and changes arbitrary. So it is possible to introduce noise in the framework without adding complexity to expressions.

Assuming that the function F(→X) is square-integrable with respect to distribution H (i.e. E[F2(→X)]<+∞)), we have the following unique Sobol’ decomposition of →Y=F(→X) (see [5]) given by

Due to orthogonality of the summands, we can decompose the variance of the model output:

In this expression Du≜V[Fu(→Xu)] is the contribution of summand Fu(→Xu) to the output variance.

The sensitivity index (Sobol’ index) of variable set →Xu,u⊂{1,…,d} is defined as

The sensitivity index Su describes the amount of the total variance explained by the variance in the subset of model input variables →Xu.

Main (Si) and total (Ti) Sobol’ indices are defined as

Let us consider the following working model of noisy output:

where α and β are some random noise, t is some virtual variable generating noise (i.e. seed of random generator),

Let Sεi and Tεi be mean and total Sobol’ indices computed for function F (i.e. with noise in →Y present).

Having defined necessary concepts we can state the noise correction procedure proposed in the paper.

If dependency has same structure as in Definition 4 and α and β do not depend on →X. Then it holds that:

Besides, we can consider Tεt:

Note that results presented above can be used with any indices estimation schema and noise distribution. The only requirement is the stationariness of noise.

Also note that to compute noise corrected Sobol’ indices one should use several estimates of noised indices. Which would lead no increased variance of final estimate.

If the used Sobol’ indices estimation procedure ˆ⋅ for estimation of Sεi, Tεi, Tεt is unbiased and estimation errors of ˆSεi, ˆTεi, ˆTεt are uncorrelated, then estimates of ˆSi, ˆTi from equations (1) and (2) the bias (first order correction) of estimators:

And corresponding variances are:

Estimators in equations (1) and (2) are common ration estimators. Expressions for bias and variance for such estimators can be found here [27]. ■

Looking at equations (5) and (6) one may see that due to a denominator the greater noise level is the greater the variance of noise corrected estimator would be. This effect is accordance with experimental results presented in Section 4.

If method from [9] is used to compute Sobol’ indices V(ˆSεi) can be computed via bootstrap and corresponding corrections to the Si, Ti estimates could be made.

In this section we demonstrate how our approach performs on number of examples.

We will use method from [9] with implementation taken from library [11] (library version 6.3 was used).

Another common function to consider in papers about Sobol’ indices is Sobol’ function (it’s properties was studied in [5]).

For both examples one may see that corrected estimates have much lower bias, but increased variance, which however decreases as sample size gets bigger.

Let us consider a bit more complex example – model a steel column under stress. This function is used to demonstrate uncertainty quantification, for example, in works [19], [20]. The dependency can be written as following formlua:

In the experiment we introduce noise to the model by assuming that we can not control variable. Firstly, we estimate Sobol indices, using Fs=500 and will consider them as true values in the analysis..

Then we add fictive variable and set random values to Fs on each evaluation (with distribution U(465,535)).

We presented a noise correction method for Sobol’ indices computation and demonstrated it’s performance on several toy examples. We think the method is easier to use and, because of its simplicity, more reliable than existing alternatives when one needs to perform sensitivity analysis on the noisy functions (which often happens with numeric solvers where noise may be introduced due to convergence issues).

Main current limitation of the method is its imposed assumption on the noise structure, which in some cases may be not possible to easily check a priory. Though we hope that we will be able to consider more general setting in the future.

One particular possible way to loosen the requirements of noise may be through analysis of higher order indices which method from [9] allows to do without additional computational budget.

Also it was observed above that noise correction procedure tends to increase variance of corrected indices estimates. Due to that it may make sense to use additional variance reduction techniques in base estimation procedures. One of the promising approaches may be in using of special designs of experiments that reduce the variance of estimation [28].

The research of the first author was conducted in IITP RAS and supportedsolely by the Russian Science Foundation grant (project 14-50-00150).