Calibrating neural networks is of utmost importance when employing them in safety-critical applications where the downstream decision making depends on the predicted probabilities. Measuring calibration error amounts to comparing two empirical distributions. In this work, we introduce a binning-free calibration measure inspired by the classical Kolmogorov-Smirnov (KS) statistical test in which the main idea is to compare the respective cumulative probability distributions. From this, by approximating the empirical cumulative distribution using a differentiable function via splines, we obtain a recalibration function, which maps the network outputs to actual (calibrated) class assignment probabilities. The spine-fitting is performed using a held-out calibration set and the obtained recalibration function is evaluated on an unseen test set. We tested our method against existing calibration approaches on various image classification datasets and our spline-based recalibration approach consistently outperforms existing methods on KS error as well as other commonly used calibration measures. 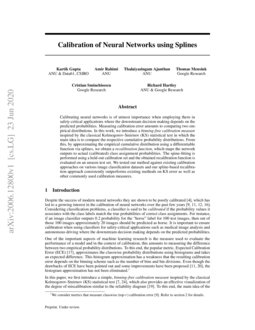 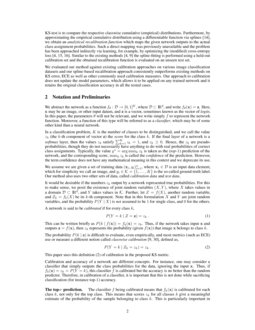 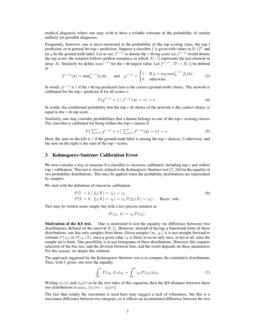 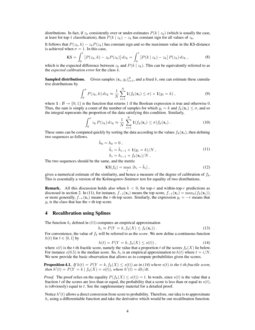 A probabilistic model is said to be calibrated if its predicted probabil...
Anusri Pampari, et al. ∙

The reliability of a machine learning model's confidence in its predicti...
Jeremy Nixon, et al. ∙

Calibrating Predictions to Decisions: A Novel Approach to Multi-Class Calibration

Taking a Step Back with KCal: Multi-Class Kernel-Based Calibration for Deep Neural Networks

In this article we compare the performances of a logistic regression and...
Matthieu Garcin, et al. ∙

Despite the success of modern neural networks they are shown to be poorly calibrated guo2017calibration, which has led to a growing interest in the calibration of neural networks over the past few years kull2019beyond; kumar2019verified; kumar2018trainable; muller2019does

. Considering classification problems, a classifier is said to be

calibrated if the probability values it associates with the class labels match the true probabilities of correct class assignments. For instance, if an image classifier outputs 0.2 probability for the “horse” label for 100 test images, then out of those 100 images approximately 20 images should be predicted as horse. It is important to ensure calibration when using classifiers for safety-critical applications such as medical image analysis and autonomous driving where the downstream decision making depends on the predicted probabilities.

One of the important aspects of machine learning research is the measure used to evaluate the performance of a model and in the context of calibration, this amounts to measuring the difference between two empirical probability distributions. To this end, the popular metric, Expected Calibration Error (ECE)

naeini2015obtaining, approximates the classwise probability distributions using histograms and takes an expected difference. This histogram approximation has a weakness that the resulting calibration error depends on the binning scheme such as the number of bins and bin divisions. Even though the drawbacks of ECE have been pointed out and some improvements have been proposed kumar2019verified; nixon2019measuring, the histogram approximation has not been eliminated.111We consider metrics that measure classwise (top-r) calibration error kull2019beyond. Refer to section 2 for details.

In this paper, we first introduce a simple, binning-free calibration measure inspired by the classical Kolmogorov-Smirnov (KS) statistical test kolmogorov1933sulla; smirnov1939estimation, which also provides an effective visualization of the degree of miscalibration similar to the reliability diagram niculescu2005predicting. To this end, the main idea of the KS-test is to compare the respective classwise cumulative (empirical) distributions. Furthermore, by approximating the empirical cumulative distribution using a differentiable function via splines Mckinley_cubicspline, we obtain an analytical recalibration function which maps the given network outputs to the actual class assignment probabilities. Such a direct mapping was previously unavailable and the problem has been approached indirectly via learning, for example, by optimizing the (modified) cross-entropy loss guo2017calibration; mukhoti2020calibrating; muller2019does. Similar to the existing methods guo2017calibration; kull2019beyond the spline-fitting is performed using a held-out calibration set and the obtained recalibration function is evaluated on an unseen test set.

We abstract the network as a function fθ:D→[0,1]K, where D⊂IRd, and write fθ(\bfx)=\bfz. Here, x may be an image, or other input datum, and z

is a vector, sometimes known as the vector of

logits. In this paper, the parameters θ will not be relevant, and we write simply f to represent the network function. Moreover, a function of this type will be referred to as a classifier, which may be of some other kind than a neural network.

In a classification problem, K is the number of classes to be distinguished, and we call the value zk (the k-th component of vector z) the score for the class k. If the final layer of a network is a softmax layer, then the values zk satisfy ∑Kk=1zk=1, and zk≥0. Hence, the zk are pseudo-probabilities, though they do not necessarily have anything to do with real probabilities of correct class assignments. Typically, the value y∗=argmaxkzk is taken as the (top-1) prediction of the network, and the corresponding score, maxkzk is called the confidence of the prediction. However, the term confidence does not have any mathematical meaning in this context and we deprecate its use.

We assume we are given a set of training data (\bfxi,yi)ni=1, where \bfxi∈D is an input data element, which for simplicity we call an image, and yi∈K={1,…,K} is the so-called ground-truth label. Our method also uses two other sets of data, called calibration data and test data.

It would be desirable if the numbers zk

output by a network represented true probabilities. For this to make sense, we posit the existence of joint random variables

(X,Y), where X takes values in a domain D⊂IRd, and Y takes values in K. Further, let Z=f(X), another random variable, and Zk=fk(X) be its k-th component. Note that in this formulation X and Y are joint random variables, and the probability P(Y | X) is not assumed to be 1 for single class, and 0 for the others.

A network is said to be calibrated if for every class k,

This can be written briefly as P(k | f(\bfx))=fk(\bfx)=zk. Thus, if the network takes input x and outputs \bfz=f(\bfx), then zk represents the probability (given f(\bfx)) that image x belongs to class k.

The probability P(k | \bfz) is difficult to evaluate, even empirically, and most metrics (such as ECE) use or measure a different notion called classwise calibration kull2019beyond; zadrozny2002transforming, defined as,

This paper uses this definition (2) of calibration in the proposed KS metric.

Calibration and accuracy of a network are different concepts. For instance, one may consider a classifier that simply outputs the class probabilities for the data, ignoring the input x. Thus, if fk(\bfx\bfx)=zk=P(Y=k), this classifier f is calibrated but the accuracy is no better than the random predictor. Therefore, in calibration of a classifier, it is important that this is not done while sacrificing classification (for instance top-1) accuracy.

The classifier f being calibrated means that fk(\bfx\bfx) is calibrated for each class k, not only for the top class. This means that scores zk for all classes k

k. This is particularly important in medical diagnosis where one may wish to have a reliable estimate of the probability of certain unlikely yet possible diagnoses.

Frequently, however, one is most interested in the probability of the top scoring class, the top-1 prediction, or in general the top-r prediction. Suppose a classifier f is given with values in [0,1]K and let y be the ground truth label. Let us use f(−r) to denote the r-th top score (so f(−1) would denote the top score; the notation follows python semantics in which A[−1] represents the last element in array A). Similarly we define max(−r) for the r-th largest value. Let f(−r):D→[0,1] be defined as

In words, y(−r) is 1 if the r-th top predicted class is the correct (ground-truth) choice. The network is calibrated for the top-r predictor if for all scores σ,

In words, the conditional probability that the top-r-th choice of the network is the correct choice, is equal to the r-th top score.

Similarly, one may consider probabilities that a datum belongs to one of the top-r scoring classes. The classifier is calibrated for being within-the-top-r classes if

We now consider a way to measure if a classifier is classwise calibrated, including top-r and within-top-r calibration. This test is closely related to the Kolmogorov-Smirnov test kolmogorov1933sulla; smirnov1939estimation for the equality of two probability distributions. This may be applied when the probability distributions are represented by samples.

We start with the definition of classwise calibration:

Motivation of the KS test.

One is motivated to test the equality (or difference between) two distributions, defined on the interval [0,1]. However, instead of having a functional form of these distributions, one has only samples from them. Given samples (\bfxi,yi), it is not straight-forward to estimate P(zk) or P(zk | k), since a given value zk is likely to occur only once, or not at all, since the sample set is finite. One possibility is to use histograms of these distributions. However, this requires selection of the bin size, and the division between bins, and the result depends on these parameters. For this reason, we abjure this solution.

The approach suggested by the Kolmogorov-Smirnov test is to compare the cumulative distributions. Thus, with k given, one tests the equality

Writing ϕ1(σ) and ϕ2(σ) to be the two sides of this equation, then the KS-distance between these two distributions is maxσ|ϕ1(σ)−ϕ2(σ)|.

The fact that simply the maximum is used here may suggest a lack of robustness, but this is a maximum difference between two integrals, so it reflects an accumulated difference between the two distributions. In fact, if zk consistently over or under-estimates P(k | zk) (which is usually the case, at least for top-1 classification), then P(k | zk)−zk has constant sign for all values of zk.

It follows that P(zk,k)−zkP(zk) has constant sign and so the maximum value in the KS-distance is achieved when σ=1. In this case,

which is the expected difference between zk and P(k | zk). This can be equivalently referred to as the expected calibration error for the class k.

Given samples (\bfxi,yi)Ni=1, and a fixed k, one can estimate these cumulative distributions by

where \bf1:B→{0,1} is the function that returns 1 if the Boolean expression is true and otherwise 0. Thus, the sum is simply a count of the number of samples for which yi=k and fk(\bfx\bfxi)≤σ, and so the integral represents the proportion of the data satisfying this condition. Similarly,

These sums can be computed quickly by sorting the data according to the values fk(\bfx\bfxi), then defining two sequences as follows.

The two sequences should be the same, and the metric

gives a numerical estimate of the similarity, and hence a measure of the degree of calibration of fk. This is essentially a version of the Kolmogorov-Smirnov test for equality of two distributions.

The function hi defined in (11) computes an empirical approximation

For convenience, the value of fk will be referred to as the score. We now define a continuous function h(t) for t∈[0,1] by

where s(t) is the t-th fractile score, namely the value that a proportion t of the scores fk(X) lie below. For instance s(0.5) is the median score. So, hi is an empirical approximation to h(t) where t=i/N. We now provide the basic observation that allows us to compute probabilities given the scores.