Cake-Cutting with Different Entitlements: How Many Cuts are Needed?

A cake has to be divided fairly among n agents. When all agents have equal entitlements, it is known that such a division can be implemented with n-1 cuts. When agents may have different entitlements, we show that at least 2 n -2 cuts may be necessary, and 2 n·Θ((n)) cuts are always sufficient. 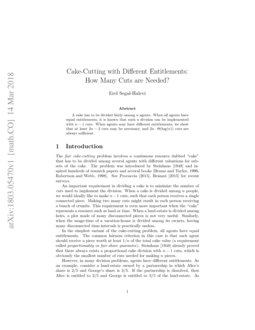 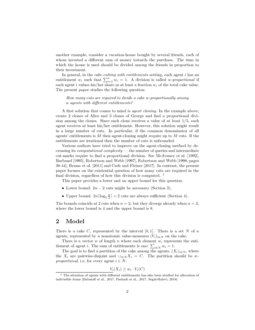 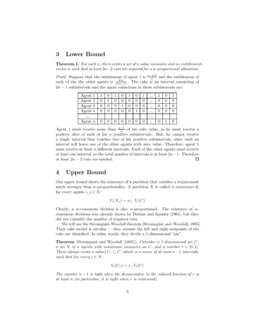 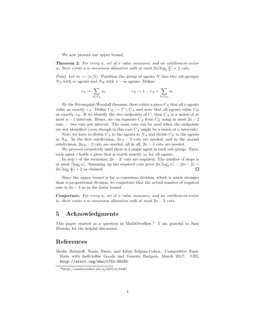 The fair cake-cutting problem involves a continuous resource dubbed “cake” that has to be divided among several agents with different valuations for subsets of the cake. The problem was introduced by Steinhaus (1948) and inspired hundreds of research papers and several books (Brams and Taylor, 1996; Robertson and Webb, 1998; Moulin, 2004; Brams, 2007). See Procaccia (2015); Brânzei (2015); Brams and Klamler (2017); Segal-Halevi (2017) for recent surveys.

An important requirement in dividing a cake is to minimize the number of cuts used to implement the division. When a cake is divided among n people, we would ideally like to make n−1 cuts, such that each person receives a single connected piece. Making too many cuts might result in each person receiving a bunch of crumbs. This requirement is even more important when the “cake” represents a resource such as land or time. When a land-estate is divided among heirs, a plot made of many disconnected pieces cannot be efficiently built upon or cultivated. Similarly, when the usage-time of a vacation-house is divided among its owners, having many disconnected time-intervals is practically useless.

In the simplest variant of the cake-cutting problem, all agents have equal entitlements. The common fairness criterion in this case is that each agent should receive a piece worth at least 1/n of the total cake value (a requirement called proportionality or fair-share guarantee). Steinhaus (1948) already proved that there always exists a proportional cake division with n−1 cuts, which is obviously the smallest number of cuts needed for making n pieces.

However, in many division problems, agents have different entitlements. As an example, consider a land-estate owned by a partnership in which Alice’s share is 2/5 and George’s share is 3/5. If the partnership is dissolved, then Alice is entitled to 2/5 and George is entitled to 3/5 of the land-estate. As another example, consider a vacation-house bought by several friends, each of whom invested a different sum of money towards the purchase. The time in which the house is used should be divided among the friends in proportion to their investment. The situation of agents with different entitlements has been studied both for cake-cutting and for allocation of indivisible items (Babaioff et al., 2017; Farhadi et al., 2017; Segal-Halevi, 2018); here we focus on cake-cutting.

How many cuts are required to divide a cake w-proportionally among n agents?

A first solution that comes to mind is agent cloning. In the example above, create 2 clones of Alice and 3 clones of George and find a proportional division among the clones. Since each clone receives a value of at least 1/5, each agent receives at least his/her entitlement. However, this solution might result in a large number of cuts. In particular, if the common denominator of all agents’ entitlements is D then agent-cloning might require up to D−1 cuts. If the entitlements are irrational then the number of cuts is unbounded.

Various authors have tried to improve on the agent-cloning method by decreasing its computational complexity — the number of evaluation queries and intermediate cut-marks required to find a proportional division. See McAvaney et al. (1992), Barbanel (1995), Robertson and Webb (1997), Robertson and Webb (1998, pages 36-–44), Brams et al. (2011). The most recent advancement in this front is by Cseh and Fleiner (2017). After summarizing the computational complexity of previous algorithms, they present a faster one that requires 2(n−1)⌈log2D⌉ queries, where D is the smallest common denominator of the entitlements. They prove that this number is asymptotically optimal.

In contrast, the present paper focuses on the existential question of how many cuts are required in the final division, regardless of how this division is computed. To the best of our knowledge, the only previous answer to this question is by Brams et al. (2011), who prove that n−1 cuts may be insufficient.

The present paper provides a lower and an upper bound for this question.

There is a vector

w of length n where each element wi represents the entitlement of agent i. The sum of entitlements is one: ∑i∈Nwi=1.

The goal is to find a partition of the cake among the agents, (Xi)i∈N, where the Xi are pairwise-disjoint and ∪i∈NXi=C. The partition should be w-proportional, i.e, for every agent i∈N:

For each n, there exists a set of n value measures and an entitlement-vector w such that at least 2n−2 cuts are required for a w-proportional allocation.

Our upper bound shows the existence of a partition that satisfies a requirement much stronger than w-proportionality. A partition X is called w-consensus if, for every agents i,j∈N:

We will use the Stromquist-Woodall theorem (Stromquist and Woodall, 1985). Their cake model is circular — they assume the left and right endpoints of the cake are identified. In other words, they divide a 1-dimensional “pie”.

Consider a 1-dimensional pie C, a set N of n agents with nonatomic measures on C, and a number r∈[0,1]. There always exists a subset Cr⊆C, which is a union of at most n−1 intervals, such that for every i∈N:

The number n−1 is tight when the denominator in the reduced fraction of r is at least n (in particular, it is tight when r is irrational).

We now present our upper bound. Denote ˆn:=n rounded up to the nearest power of two =2⌈log2n⌉.

For every n, set of n value measures, and an entitlement-vector w, there exists a w-consensus allocation with at most 2nlog2ˆn−2ˆn+2 cuts.

By the Stromquist-Woodall theorem, there exists a piece CA that all n agents value as exactly rA. Define CB:=C∖CA and note that all agents value CB as exactly rB. If we identify the two endpoints of C, then CA is a union of at most n−1 intervals. Hence, we can separate CA from CB using at most 2n−2 cuts — two cuts per interval. The same cuts can be used when the endpoints are not identified (even though in this case CA might be a union of n intervals).

We proceed recursively until there is a single agent in each sub-group. Then, each agent i holds a piece that is worth exactly wi for all agents.

In step i of the recursion, 2n−2i cuts are required. The number of steps is log2ˆn. Summing up the required cuts gives 2nlog2ˆn−(2ˆn−2) as claimed. ∎

Since the upper bound is for w-consensus division, which is much stronger than w-proportional division, we conjecture that the actual number of required cuts is 2n−2 as in the lower bound.

For every n, set of n value measures, and an entitlement-vector w, there exists a w-consensus allocation with at most 2n−2 cuts.

This paper started as a question in MathOverflow (https://mathoverflow.net/q/242112/34461). I am grateful to Sam Zbarsky for the discussion.