CAIL2019-SCM: A Dataset of Similar Case Matching in Legal Domain

In this paper, we introduce CAIL2019-SCM, Chinese AI and Law 2019 Similar Case Matching dataset. CAIL2019-SCM contains 8,964 triplets of cases published by the Supreme People's Court of China. CAIL2019-SCM focuses on detecting similar cases, and the participants are required to check which two cases are more similar in the triplets. There are 711 teams who participated in this year's competition, and the best team has reached a score of 71.88. We have also implemented several baselines to help researchers better understand this task. The dataset and more details can be found from https://github.com/china-ai-law-challenge/CAIL2019/tree/master/scm. 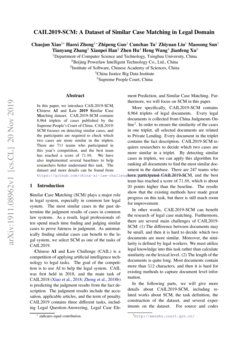 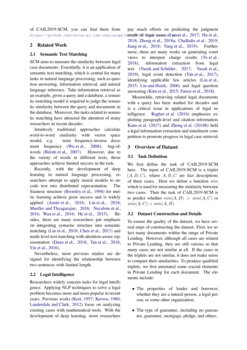 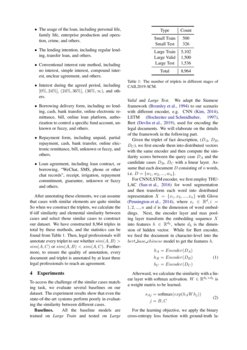 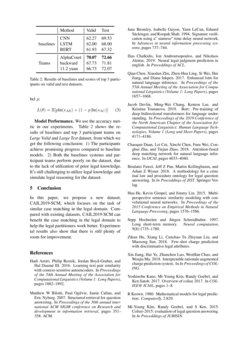 In this paper, we give an overview of the Legal Judgment Prediction (LJP...
Haoxi Zhong, et al. ∙

A Summary of the ALQAC 2021 Competition

The detection of thoracic abnormalities challenge is organized by the De...
Jie Lian, et al. ∙

aw Challenge (CAIL) is a competition of applying artificial intelligence technology to legal tasks. The goal of the competition is to use AI to help the legal system. CAIL was first held in 2018, and the main task of CAIL2018

Xiao et al. (2018); Zhong et al. (2018b) is predicting the judgment results from the fact description. The judgment results include the accusation, applicable articles, and the term of penalty. CAIL2019 contains three different tasks, including Legal Question-Answering, Legal Case Element Prediction, and Similar Case Matching. Furthermore, we will focus on SCM in this paper.

More specifically, CAIL2019-SCM contains 8,964 triplets of legal documents. Every legal documents is collected from China Judgments Online111http://wenshu.court.gov.cn/. In order to ensure the similarity of the cases in one triplet, all selected documents are related to Private Lending. Every document in the triplet contains the fact description. CAIL2019-SCM requires researchers to decide which two cases are more similar in a triplet. By detecting similar cases in triplets, we can apply this algorithm for ranking all documents to find the most similar document in the database. There are 247 teams who have participated CAIL2019-SCM, and the best team has reached a score of 71.88, which is about 20 points higher than the baseline. The results show that the existing methods have made great progress on this task, but there is still much room for improvement.

In other words, CAIL2019-SCM can benefit the research of legal case matching. Furthermore, there are several main challenges of CAIL2019-SCM: (1) The difference between documents may be small, and then it is hard to decide which two documents are more similar. Moreover, the similarity is defined by legal workers. We must utilize legal knowledge into this task rather than calculate similarity on the lexical level. (2) The length of the documents is quite long. Most documents contain more than 512 characters, and then it is hard for existing methods to capture document level information.

In the following parts, we will give more details about CAIL2019-SCM, including related works about SCM, the task definition, the construction of the dataset, and several experiments on the dataset.

SCM aims to measure the similarity between legal case documents. Essentially, it is an application of semantic text matching, which is central for many tasks in natural language processing, such as question answering, information retrieval, and natural language inference. Take information retrieval as an example, given a query and a database, a semantic matching model is required to judge the semantic similarity between the query and documents in the database. Moreover, the tasks related to semantic matching have attracted the attention of many researchers in recent decades.

Wu et al. (2008), bag-of-words Bilotti et al. (2007). However, due to the variety of words in different texts, these approaches achieve limited success in the task.

Recently, with the development of deep learning in natural language processing, researchers attempt to apply neural models to encode text into distributed representation. The Siamese structure

Nevertheless, most previous studies are designed for identifying the relationship between two sentences with limited length.

Meanwhile, retrieving related legal documents with a query has been studied for decades and is a critical issue in applications of legal intelligence. Raghav et al. (2016) emphasize exploiting paragraph-level and citation information. Kano et al. (2017) and Zhong et al. (2018b) held a legal information extraction and entailment competition to promote progress in legal case retrieval.

To ensure the quality of the dataset, we have several steps of constructing the dataset. First, we select many documents within the range of Private Lending. However, although all cases are related to Private Lending, they are still various so that many cases are not similar at all. If the cases in the triplets are not similar, it does not make sense to compare their similarities. To produce qualified triplets, we first annotated some crucial elements in Private Lending for each document. The elements include:

After annotating these elements, we can assume that cases with similar elements are quite similar. So when we construct the triplets, we calculate the tf-idf similarity and elemental similarity between cases and select those similar cases to construct our dataset. We have constructed 8,964 triples in total by these methods, and the statistics can be found from Table 1. Then, legal professionals will annotate every triplet to see whether sim(A,B)>sim(A,C) or sim(A,B)<sim(A,C). Furthermore, to ensure the quality of annotation, every document and triplet is annotated by at least three legal professionals to reach an agreement.

To access the challenge of the similar cases matching task, we evaluate several baselines on our dataset. The experiment results show that even the state-of-the-art systems perform poorly in evaluating the similarity between different cases.

Baselines. All the baseline models are trained on Large Train and tested on Large Valid and Large Test. We adapt the Siamese framework Bromley et al. (1994) to our scenario with different encoder, e.g. CNN Kim (2014), LSTM Hochreiter and Schmidhuber (1997), Bert Devlin et al. (2019), used for encoding the legal documents. We will elaborate on the details of the framework in the following part.

Given the triplet of fact description, (DA, DB, DC), we first encode them into distributed vectors with the same encoder and then compute the similarity scores between the query case DA and the candidate cases DB, DC with a linear layer. Assume that each document D consisting of n words, i.e. D={w1,w2,...,wn}.

is the dimension of word embeddings. Next, the encoder layer and max pooling layer transform the embedding sequence

X into features h∈Rdh, where dh is the dimension of hidden vector. While for Bert encoder, we feed the document in character-level into the bert_base_chinese model to get the features h.

Afterward, we calculate the similarity with a linear layer with softmax activation. W∈Rdh×dh is a weight matrix to be learned.

For the learning objective, we apply the binary cross-entropy loss function with ground-truth label

Model Performance. We use the accuracy metric in our experiments. Table 2 shows the results of baselines and top 3 participant teams on Large Valid and Large Test dataset, from which we get the following conclusion: 1) The participants achieve promising progress compared to baseline models. 2) Both the baselines systems and participant teams perform poorly on the dataset, due to the lack of utilization of prior legal knowledge. It’s still challenging to utilize legal knowledge and simulate legal reasoning for the dataset.