Generating images according to natural language descriptions is a challenging task. In this work, we propose the Combined Attention Generative Adversarial Network (CAGAN) to generate photo-realistic images according to textual descriptions. The proposed CAGAN utilises two attention models: word attention to draw different sub-regions conditioned on related words; and squeeze-and-excitation attention to capture non-linear interaction among channels. With spectral normalisation to stabilise training, our proposed CAGAN improves the state of the art on the IS and FID on the CUB dataset and the FID on the more challenging COCO dataset. Furthermore, we demonstrate that judging a model by a single evaluation metric can be misleading by developing an additional model adding local self-attention which scores a higher IS, outperforming the state of the art on the CUB dataset, but generates unrealistic images through feature repetition. 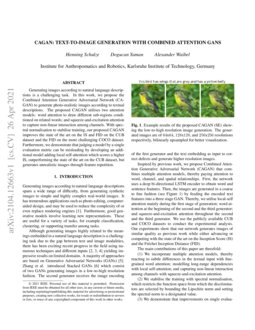 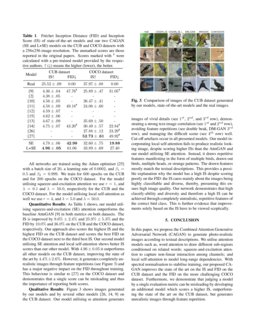 Generating images according to natural language descriptions spans a wide range of difficulty, from generating synthetic images to simple and highly complex real-world images. It has tremendous applications such as photo-editing, computer-aided design, and may be used to reduce the complexity of or even replace rendering engines [1]. Furthermore, good generative models involve learning new representations. These are useful for a variety of tasks, for example classification, clustering, or supporting transfer among tasks.

Although generating images highly related to the meanings embedded in a natural language description is a challenging task due to the gap between text and image modalities, there has been exciting recent progress in the field using numerous techniques and different inputs [2, 3, 4] yielding impressive results on limited domains. A majority of approaches are based on Generative Adversarial Networks (GANs) [5]. Zhang et al. introduced Stacked GANs [6] which consist of two GANs generating images in a low-to-high resolution fashion. The second generator receives the image encoding of the first generator and the text embedding as input to correct defects and generate higher resolution images.

Inspired by previous work, we propose Combined Attention Generative Adversarial Network (CAGAN) that combines multiple attention models, thereby paying attention to word, channel, and spatial relationships. First, the network uses a deep bi-directional LSTM encoder to obtain word and sentence features. Then, the images are generated in a coarse to fine fashion (see Figure 1) by feeding the encoded text features into a three stage GAN. Thereby, we utilise local-self attention mainly during the first stage of generation; word attention at the beginning of the second and the third generator; and squeeze-and-excitation attention throughout the second and the third generator. We use the publicly available CUB and COCO datasets to conduct the experimental analysis. Our experiments show that our network generates images of similar quality as previous work while either advancing or competing with the state of the art on the Inception Score (IS) and the Fréchet Inception Distance (FID).

The main contributions of this paper are threefold:

(2) We stabilise the training with spectral normalisation, which restricts the function space from which the discriminators are selected by bounding the Lipschitz norm and setting the spectral norm to a designated value.

While there has been substantial work for years in the field of image-to-text translation, such as image caption generation [7], only recently the inverse problem came into focus: text-to-image generation. Generative image models require a deep understanding of spatial, visual, and semantic world knowledge. A majority of recent approaches are based on GANs [5].

introduced a novel loss function and fine-grained word attention into the model.

To compute word attention, the word vectors are converted into a common semantic space. For each subregion of the image a word-context vector is computed, dynamically representing word vectors that are relevant to the subregion of the image, i.e., indicating the weight the word attention model attends to the lth word when generating a subregion. The final objective function of the attentional generative network is defined as:

is a hyperparameter to balance the two terms. The first term is the GAN loss that jointly approximates conditional and unconditional distributions

[8]. At the ith stage, the generator Gi has a corresponding discriminator Di. The adversarial loss for Gi is defined as:

is trained to classify the input into the class of real or fake by minimizing the cross-entropy loss.

The second term of Equation 1, LDAMSM, is a fine-grained word-level image-text matching loss computed by the DAMSM [9]

. The DAMSM learns two neural networks that map subregions of the image and words of the sentence to a common semantic space, thus measuring the image-text similarity at the word level to compute a fine-grained loss for image generation. The image encoder prior to the DAMSM is built upon a pretrained Inception-v3 model

with added perceptron layers to extract visual feature vectors for each subregion of the image and a global image vector.

the values, each obtained via linear transformations

W of the pixel ij and their neighbourhood pixels. The advantage over a simple convolution is that each pixel value is aggregated with a convex convolution of value vectors with mixing weights (softmaxab) parametrised by content interactions.

Squeeze-and-excitation (SE) attention Instead of focusing on the spatial component of CNNs, SE attention [18] aims to improve the channel component by explicitly modelling interdependencies among channels via channel-wise weighting. Thus, they can be interpreted as a light-weight self-attention function on channels. First, a squeeze operation aggregates feature maps, typically created by a convolution, across the spatial dimension (HxW

) yielding a channel descriptor embedding the global distribution of channel-wise features. The proposed squeeze operation is mean-pooling across the entire spatial dimension of each channel. A following excitation operation aims to capture channel-wise dependencies, specifically non-linear interaction among channels and non-mutually exclusive relationships. The latter allows multiple channels to be emphasized. The excitation operation is a simple self-gating operation with a sigmoid activation function. To limit model complexity and increase generalisation, a bottleneck is formed around the gating mechanism. The excitation operation computes per-channel modulation weights. These are applied to the original feature maps performing an adaptive recalibration.

Evaluation metrics The Inception Score (IS) [21] is a quantitative metric to evaluate generated images. It measures two properties: highly classifiable and diverse with respect to class labels. Although the IS is the most widely used metric in text-to-image generation, it has several issues [22] regarding the computation of the score itself and the usage of the score. The Fréchet Inception Distance (FID) [23] views features as a continuous multivariate Gaussian and computes a distance in the feature space between the real data and the generated data. A lower FID implies a closer distance between the generated image distribution and the real image distribution. Note that there is some inconsistency in how the FID is calculated in prior work, originating from different pre-processing techniques that significantly impact the score. We use the official implementation (https://github.com/bioinf-jku/TTUR) of the FID. To ensure a consistent calculation of all of our evaluation metrics, we replace the generic Inception v3 network with the pre-trained Inception v3 network we used for computing the IS of the corresponding dataset. We re-calculate the FID scores of papers with an official model to provide a fair comparison.

Implementation detail We employ spectral normalisation [24], a weight normalisation technique to stabilise the training of the discriminator, during training. To compute the semantic embedding for text descriptions, we employ a pre-trained bi-direction LSTM encoder by Xu et al. [9] with a dimension of 256 for the word embedding. The sentence length was 18 for the CUB dataset and 12 for the COCO dataset.

Quantitative Results: As Table 1 shows, our model utilising squeeze-and-excitation (SE) attention outperforms the baseline AttnGAN [9] in both metrics on both datasets. The IS is improved by 9.6%±2.4% and 25.9%±5.3% and the FID by 10.0% and 36.0% on the CUB and the COCO dataset, respectively. Our approach also scores the highest IS and the highest FID on the CUB dataset and scores the best FID on the COCO dataset next to the third best IS. Our second model utilising SE attention and local self-attention shows better IS scores than our other model. With 4.96±0.05 it outperforms all other models on the CUB dataset, improving the state of the art by 4.4%±2.6%. However, it generates completely unrealistic images through feature repetitions (see Figure 3) and has a major negative impact on the FID throughout training. This behaviour is similar to [27] on the COCO dataset and demonstrates that a single score can be misleading and thus the importance of reporting both scores.

Qualitative Results: Figure 3 shows images generated by our models and by several other models [26, 14, 9] on the CUB dataset. Our model utilising se attention generates images of vivid details (see 1st, 2nd, and 3rd row), demonstrating a strong text-image correlation (see 1st and 2nd row), avoiding feature repetitions (see double beak, DM-GAN 3rd row), and managing the difficult scene (see 4th row) well. Cut-off artefacts occur in all presented models. Our model incorporating local self-attention fails to produce realistic looking image, despite scoring higher ISs than the AttnGAN and our model utilising SE attention. Instead, it draws repetitive features manifesting in the form of multiple birds, drawn out birds, multiple heads, or strange patterns. The drawn features mostly match the textual descriptions. This provides a possible explanation why the model has a high IS despite scoring poorly on the FID: the IS cares mainly about the images being highly classifiable and diverse, thereby, presuming this ensues high image quality. Our network demonstrates that high classify-ability and diversity and therefore a high IS can be achieved through completely unrealistic, repetitive features of the correct bird class. This is further evidence that improvements solely based on the IS have to be viewed sceptically.

In this paper, we propose the Combined Attention Generative Adversarial Network (CAGAN) to generate photo-realistic images according to textual descriptions. We utilise attention models such as, word attention to draw different sub-regions conditioned on related words; squeeze-and-excitation attention to capture non-linear interaction among channels; and local self-attention to model long-range dependencies. With spectral normalisation to stabilise training, our proposed CAGAN improves the state of the art on the IS and FID on the CUB dataset and the FID on the more challenging COCO dataset. Furthermore, we demonstrate that judging a model by a single evaluation metric can be misleading by developing an additional model which scores a higher IS, outperforming the state of the art on the CUB dataset, but generates unrealistic images through feature repetition.