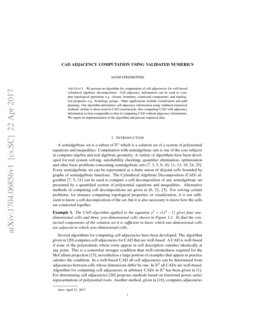 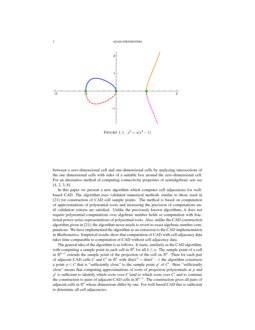 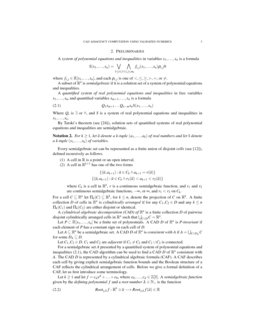 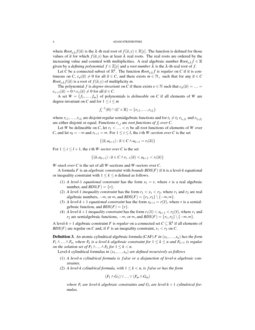 The general idea of the algorithm is as follows. It starts, similarly as the CAD algorithm, with computing a sample point in each cell in Rk for all k≤n. The sample point of a cell in Rk+1 extends the sample point of the projection of the cell on Rk. Then for each pair of adjacent CAD cells C and C′ in Rk with dimC′=dimC−1 the algorithm constructs a point p∈C that is “sufficiently close” to the sample point p′ of C′. Here “sufficiently close” means that computing approximations of roots of projection polynomials at p and p′ is sufficient to identify which roots over C tend to which roots over C′ and to continue the construction to pairs of adjacent CAD cells in Rk+1. The construction gives all pairs of adjacent cells in Rn whose dimensions differ by one. For well-based CAD this is sufficient to determine all cell adjacencies.

A system of polynomial equations and inequalities in variables x1,…,xn is a formula

A subset of Rn is semialgebraic if it is a solution set of a system of polynomial equations and inequalities.

A quantified system of real polynomial equations and inequalities in free variables x1,…,xm and quantified variables xm+1,…,xn is a formula

Where Qi is ∃ or ∀, and S is a system of real polynomial equations and inequalities in x1,…,xn.

Every semialgebraic set can be represented as a finite union of disjoint cells (see [12]), defined recursively as follows.

For a cell C⊆Rn let Πk(C)⊆Rk, for k≤n, denote the projection of C on Rk. A finite collection D of cells in Rn is cylindrically arranged if for any C1,C2∈D and any k≤n Πk(C1) and Πk(C2) are either disjoint or identical.

A cylindrical algebraic decomposition (CAD) of Rn is a finite collection D of pairwise disjoint cylindrically arranged cells in Rn such that ⋃C∈DC=Rn.

Let P⊂R[x1,…,xn] be a finite set of polynomials. A CAD D of Rn is P-invariant if each element of P has a constant sign on each cell of D.

Let A⊆Rn be a semialgebraic set. A CAD D of Rn is consistent with A if A=⋃C∈DAC for some DA⊆D.

For a semialgebraic set A presented by a quantified system of polynomial equations and inequalities (2.1), the CAD algorithm can be used to find a CAD D of Rn consistent with A. The CAD D is represented by a cylindrical algebraic formula (CAF). A CAF describes each cell by giving explicit semialgebraic function bounds and the Boolean structure of a CAF reflects the cylindrical arrangement of cells. Before we give a formal definition of a CAF, let us first introduce some terminology.

Let k≥1 and let f=cdyd+…+c0, where c0,…,cd∈Z[¯¯¯x]. A semialgebraic function given by the defining polynomial f and a root number λ∈N+ is the function

A set W={f1,…,fm} of polynomials is delineable on C if all elements of W are degree-invariant on C and for 1≤i≤m

A level-k+1 algebraic constraint F is regular on a connected set C⊆Rk if all elements of BDS(F) are regular on C and, if F is an inequality constraint, r1<r2 on C.

An atomic cylindrical algebraic formula (CAF) F in (x1,…,xn) has the form F1∧…∧Fn, where Fk is a level-k algebraic constraint for 1≤k≤n and Fk+1 is regular on the solution set of F1∧…∧Fk for 1≤k<n.

Level-k cylindrical formulas in (x1,…,xn) are defined recursively as follows

where each Fi is an atomic CAF. Let C(Fi) denote the solution set of Fi and let D(F)={C(F1),…,C(Fl)}. The bound polynomials of F is a finite set BP(F)⊂R[x1,…,xn] which consists of all polynomials f such that Rootxk,λf∈BDS(G) for some 1≤k≤n and a level-k algebraic constraint G that appears in F.

Note that C(Fi) is a cell and D(F) is a finite collection of pairwise disjoint cylindrically arranged cells.

Following the terminology of [20], we define a well-based CAF as follows.

In a CAD corresponding to a well-based CAF a closure of a cell is a union of cells and the only cells from other stacks adjacent to a given section are sections defined by the same polynomial. Moreover, any two adjacent cells have different dimensions and are connected through a chain of adjacent cells with dimensions increasing by one, and hence to determine all cell adjacencies it is sufficient to find all pairs of adjacent cells whose dimensions differ by one. These properties, stated precisely in Proposition 5, are essential for our algorithm.

Let F be a well-based CAF.

is a union of a finite number of cells, S⊂¯¯¯¯¯Cl, and (xn,yn)∈S. Hence, there exists a cell C⊆S such that C contains infinitely many elements of the sequence {(xn,yn)}n≥1. Therefore, C is adjacent to both Ck and Cl. Since dimC−k<l−k and l−dimC<l−k, (3) is true by the inductive hypothesis on l−k. ∎

If A is the real solution set of xy+xz+yz=0 then a well-based CAF F such that D(F) is consistent with A does not exist for any order of variables. A CAD computed using McCallum’s projection operator [14] includes cells

In this section we describe root isolation algorithms we will use in the algorithm computing cell adjacencies. Let us first introduce some notations and subalgorithms.

Let Δ(c,r)={z∈C:∣z−c∣≤r} denote a disk in the complex plane, let Q2=Z[12]={a2b:a,b∈Z} denote the set of dyadic rational numbers, and let I2(C)={Δ(c,r):c∈Q2[ı]∧r∈Q2∧r>0} denote the set of discs in the complex plane with dyadic Gaussian rational centers and dyadic rational radii. For a disc Z=Δ(c,r)∈I2(C), let γ(Z):=c and ρ(Z):=r denote the center and the radius of Z, let Z––:=max(0,∣c∣−r) and ¯¯¯¯Z:=∣c∣+r denote the minimum and maximum of absolute values of elements of Z, let conj(Z) denote the disc that consists of complex conjugates of elements of Z, and let dbl(Z)=Δ(c,2r) and quad(Z)=Δ(c,4r). When we refer to interval arithmetic operations we mean circular complex interval (disc) arithmetic (see e.g. [18]).

There exists an algorithm (ApproximateRoots) that takes as input a polynomial

then, after a suitable reordering of roots, for all 1≤j≤N ∣sj−σj∣≤ϵ.

Let us now describe a subalgorithm computing roots of polynomials with complex disc coefficients. The algorithm is based on the following proposition ([21], Proposition 4.1).

Then f has exactly k roots, multiplicities counted, in the disc Δ(z0,r).

fk not only at u, but also in a neighbourhood of u (point (5) of the definition). This property is crucial for computing cell adjacencies.

A real algebraic vector v=RAV(Ωk)=(α1,…,αk)∈Rk is represented by

To complete the recursive definition let Ω0=() be the representation of the only element of R0.