For a clustered graph, i.e, a graph whose vertex set is recursively partitioned into clusters, the C-Planarity Testing problem asks whether it is possible to find a planar embedding of the graph and a representation of each cluster as a region homeomorphic to a closed disk such that 1. the subgraph induced by each cluster is drawn in the interior of the corresponding disk, 2. each edge intersects any disk at most once, and 3. the nesting between clusters is reflected by the representation, i.e., child clusters are properly contained in their parent cluster. The computational complexity of this problem, whose study has been central to the theory of graph visualization since its introduction in 1995 [Qing-Wen Feng, Robert F. Cohen, and Peter Eades. Planarity for clustered graphs. ESA'95], has only been recently settled [Radoslav Fulek and Csaba D. Tóth. Atomic Embeddability, Clustered Planarity, and Thickenability. To appear at SODA'20]. Before such a breakthrough, the complexity question was still unsolved even when the graph has a prescribed planar embedding, i.e, for embedded clustered graphs. We show that the C-Planarity Testing problem admits a single-exponential single-parameter FPT algorithm for embedded clustered graphs, when parameterized by the carving-width of the dual graph of the input. This is the first FPT algorithm for this long-standing open problem with respect to a single notable graph-width parameter. Moreover, in the general case, the polynomial dependency of our FPT algorithm is smaller than the one of the algorithm by Fulek and Tóth. To further strengthen the relevance of this result, we show that the C-Planarity Testing problem retains its computational complexity when parameterized by several other graph-width parameters, which may potentially lead to faster algorithms. 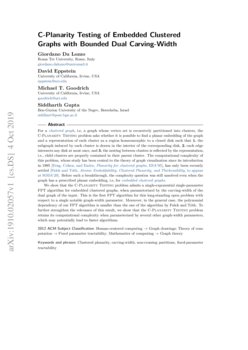 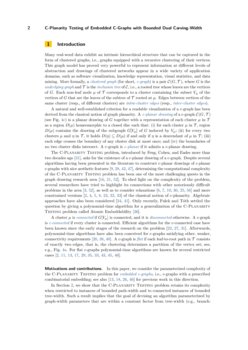 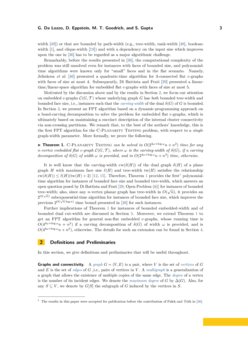 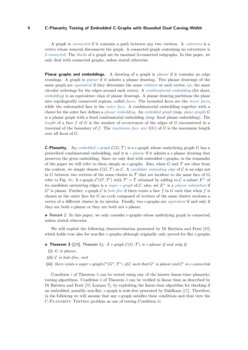 The C-Planarity problem asks for a drawing of a clustered graph, i.e., a...
Giordano Da Lozzo, et al. ∙

In the framework of graph property testing, we study the problem of dete...
Sandeep Silwal, et al. ∙

In this article we study a problem within Dempster-Shafer theory where 2...
Johan Schubert, et al. ∙

The spectral properties of Vandermonde matrices with clustered nodes