Drawing inspiration from Nyberg's paper <cit.> on perfect nonlinearity and the c-differential notion we defined in <cit.>, in this paper we introduce the concept of c-differential bent functions in two different ways (thus extending Kumar et al. <cit.> classical definition). We further extend the notion of perfect c-nonlinear introduced in <cit.>, also in two different ways, and show that, in both cases, the concepts of c-differential bent and perfect c-nonlinear are equivalent (under some natural restriction of the parameters). Some constructions of functions with these properties are also provided; one such construction provides a large class of PcN functions with respect to all c in some subfield of the field under consideration. We also show that both our classes of 0-differential bents are supersets of permutation polynomials, and that Maiorana-McFarland bent functions are not differential bent (of the first kind). 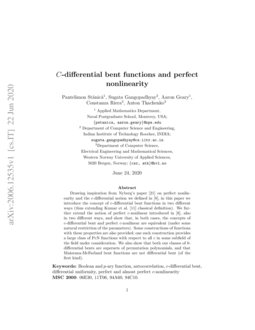 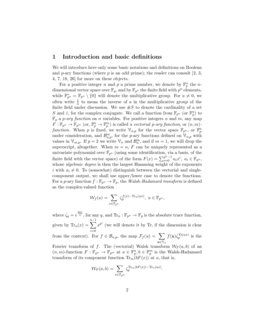 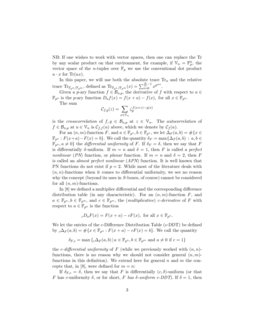 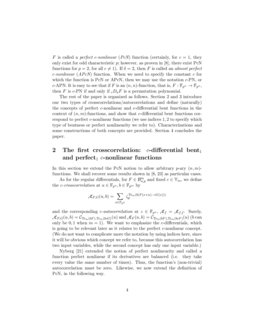 We defined in <cit.> a new multiplicative c-differential, and the corres...
Pantelimon Stanica, et al. ∙

In a prior paper, along with P. Ellingsen, P. Felke and A. Tkachenko, we...
Constanza Riera, et al. ∙

The concept of differential uniformity was recently extended to the c-di...
Mohit Pal, et al. ∙

The main problem considered in this paper is construction and theoretica...
Jack Noonan, et al. ∙

While the classical differential uniformity (c=1) is invariant under the...
Pantelimon Stanica, et al. ∙

is an odd prime); the reader can consult

For a positive integer n and p a prime number, we denote by Fnp the n

Fp, and by Fpn the finite field with pn elements, while F∗pn=Fpn∖{0} will denote the multiplicative group. For a≠0, we often write 1a to mean the inverse of a in the multiplicative group of the finite field under discussion. We use #S to denote the cardinality of a set S and ¯z, for the complex conjugate. We call a function from Fpn (or Fnp) to Fp a p-ary function on n variables. For positive integers n and m, any map F:Fpn→Fpm (or, Fnp→Fmp) is called a vectorial p-ary function, or (n,m)-function. When p is fixed, we write Vn,p for the vector space Fpn, or Fnp under consideration, and Bmn,p, for the p-ary functions defined on Vn,p with values in Vm,p. If p=2 we write Vn and Bmn, and if m=1, we will drop the superscript, altogether. When m=n, F can be uniquely represented as a univariate polynomial over Fpn (using some identification, via a basis, of the finite field with the vector space) of the form F(x)=∑pn−1i=0aixi, ai∈Fpn, whose algebraic degree is then the largest Hamming weight of the exponents i with ai≠0. To (somewhat) distinguish between the vectorial and single-component output, we shall use upper/lower case to denote the functions. For a p-ary function f:Fpn→Fp, the Walsh-Hadamard transform is defined as the complex-valued function

where ζq=e2πiq, for any q, and Trn:Fpn→Fp is the absolute trace function, given by Trn(x)=n−1∑i=0xpi (we will denote it by Tr, if the dimension is clear from the context). For f∈Bn,p, the map Ff(u)=∑x∈Vnf(x)ζTr(ux)p

is the Fourier transform of

NB: If one wishes to work with vector spaces, then one can replace the Tr by any scalar product on that environment, for example, if Vn=Fnp, the vector space of the n-tuples over Fp we use the conventional dot product u⋅x for Tr(ux).

In this paper, we will use both the absolute trace Trn and the relative trace TrFpn/Fpm, defined as TrFpn/Fpm(x)=∑nm−1i=0xpmi.

For an (n,m)-function F, and a∈Fpn,b∈Fpn, we let ΔF(a,b)=#{x∈Fpn:F(x+a)−F(x)=b}. We call the quantity δF=max{ΔF(a,b):a,b∈Fpn,a≠0} the differential uniformity of F. If δF=δ, then we say that F is differentially δ-uniform. If m=n and δ=1, then F is called a perfect nonlinear (PN) function, or planar function. If m=n and δ=2, then F is called an almost perfect nonlinear (APN) function. It is well known that PN functions do not exist if p=2. While most of the literature deals with (n,n)-functions when it comes to differential uniformity, we see no reason why the concept (beyond its uses in S-boxes, of course) cannot be considered for all (n,m)-functions.

In [8] we defined a multiplier differential and the corresponding difference distribution table (in any characteristic). For an (n,m)-function F, and a∈Fpn,b∈Fpm, and c∈Fpm, the (multiplicative) c-derivative of F with respect to a∈Fpn is the function

We let the entries of the c-Difference Distribution Table (c-DDT) be defined by cΔF(a,b)=#{x∈Fpn:F(x+a)−cF(x)=b}. We call the quantity

the c-differential uniformity of F (while we previously worked with (n,n)-functions, there is no reason why we should not consider general (n,m)-functions in this definition). We extend here for general n and m the concepts that, in [8], were defined for m=n:

If δF,c=δ, then we say that F is differentially (c,δ)-uniform (or that F has c-uniformity δ, or for short, F has δ-uniform c-DDT). If δ=1, then F is called a perfect c-nonlinear (PcN) function (certainly, for c=1, they only exist for odd characteristic p; however, as proven in [8], there exist PcN functions for p=2, for all c≠1). If δ=2, then F is called an almost perfect c-nonlinear (APcN) function. When we need to specify the constant c for which the function is PcN or APcN, then we may use the notation c-PN, or c-APN. It is easy to see that if F is an (n,n)-function, that is, F:Fpn→Fpn, then F is c-PN if and only if cDaF is a permutation polynomial.

The rest of the paper is organized as follows. Section 2 and 3 introduce our two types of crosscorrelations/autocorrelations and define (naturally) the concepts of perfect c-nonlinear and c-differential bent functions in the context of (n,m)-functions, and show that c-differential bent functions correspond to perfect c-nonlinear functions (we use indices 1,2 to specify which type of bentness or perfect nonlinearity we refer to). Characterizations and some constructions of both concepts are provided. Section 4 concludes the paper.

In this section we extend the PcN notion to allow arbitrary p-ary (n,m)-functions. We shall recover some results shown in [8, 23] as particular cases.

and the corresponding c-autocorrelation at z∈Fpn, cCf=cCf,f. Surely, cCF,G(u,b)=CTrm(bF),Trm(bcG)(u) and cCF(u,b)=CTrm(bF),Trm(bcF)(u) (b can only be 0,1 when m=1). We want to emphasize the c-differentials, which is going to be relevant later as it relates to the perfect c-nonlinear concept. (We do not want to complicate more the notation by using indices here, since it will be obvious which concept we refer to, because this autocorrelation has two input variables, while the second concept has only one input variable.)

Nyberg [21] extended the notion of perfect nonlinearity and called a function perfect nonlinear if its derivatives are balanced (i.e. they take every value the same number of times). Thus, the function’s (non-trivial) autocorrelation must be zero. Likewise, we now extend the definition of PcN, in the following way.

NB: We removed b=0 from the domain, since in that case the autocorrelation of any function is constant, pn.

A known result for classical Boolean functions, was extended in [24] for generalized Boolean functions (that is, functions defined from Vn into Zq, where q=2k), and a corresponding result connecting our definition of c-crosscorrelation to the Walsh transforms of general p-ary functions, holds, as well.

Let p be a prime number and m,n be nonzero positive integers. If F,G∈Bmn,p and c∈Fpm, then for all b∈Fpm, we have

In particular, if F=G, then

For the second identity, we reverse the argument, and obtain

The claimed consequences are immediate. ∎

Below, we will show that a function F∈Bmn,p is c-differential bent1 if the traces of all of its c-differentials, cDaF with a≠0, are balanced, thereby extending Nyberg’s result [21] on perfect nonlinearity being equivalent to bentness for functions defined from Fpn into Fp. We can also regard it as an extension of the PcN property we defined (for n=m) in [8].

where we used the assumption that the c-autocorrelations cCF(u,b) are zero, except, possibly, at u=0.

where we used the same property that the exponential sum of a balanced function (in this case Tr(ux), for u≠0) is zero. This proves the first claim. The second claim follows easily using the equations above. ∎

We now discuss some of the differential properties of a perfect1 c-nonlinear function.

Let m,n be positive integers, p a prime integer, F∈Bmn,p, and c∈Fpm fixed. Then F is a perfect1 c-nonlinear function (c-differential bent1) if and only if, for all b≠0,u≠0 fixed, x↦Trm(b(F(x+u)−cF(x)) is balanced.

The extension Qp−1↪Q(ζp) has degree p−1 and the elements in following set {ζjp|0≤j≤p−2} are linearly independent in Q(ζp) over Q, therefore the coefficients in the displayed expression are zero, that is, that for all 0≤j≤p−2, |Su,bj,c|=|Su,bp−1,c|. Summarizing, for any 0≤j≤p−1, the cardinality of the set Su,bj,c is independent of j, and so, for all c,b,u≠0 fixed, the function x↦Trm(b(F(x+u)−cF(x)) is balanced.

If x↦Trm(b(F(x+u)−cF(x)) is balanced, by reversing the argument, we find that f is perfect1 c-nonlinear. ∎

As a consequence, we can easily characterize the 0-differential bent1 functions.

Thus, if m=n and F is a permutation of Fpn, then F is 0-differential bent1 (since in this case, F is PcN for c=0 [8]). We give below another example of c-differential bent1 functions on Fpn, for all c≠1. F(x)=xpk, a linearized monomial on Fpn, we compute

using the fact that x→xd is a permutation if gcd(d,pn−1)=1, so if x covers Fpn, then xd does the same, therefore showing the first claim.

To show the second claim, by Corollary 2.6, if F were 0-differential bent1, then ∑x∈FpnζTrm(αF(x))p=0. Assuming gcd(d,pn−1)=2, then we have the identity between the following Gaussian sums

where η is the quadratic character of Fpn and χ is a nontrivial additive character of Fpn. In our case χ(u)=ζTrn(u)p, and so, our previous displayed sum is equal to (using further [13, Theorem 5.15])

From this last identity, we see that we cannot have ∑x∈FpnζTrm(αx2)p=0, if α≠0, and so, F cannot be 0-differential bent1. ∎

We can generate classes of (n,m)-functions that are c-differential bent1 in the following way. We take G to be a PcN function on Fpn with respect to c∈Fpm, a proper subfield of Fpn (that is, m<n, m|n). We then define F(x)=TrFpn/Fpm(G(x)). First, observe that since c∈Fpm, then Trn(cDaG(x))=Trm(cDaF(x)). Now, if cDaG is a permutation (using our assumption), then cDaF=TrFpn/Fpm(cDaG) is balanced, and so is b(cDaF), for b≠0. We now use the fact that multiplication by b≠0 simply shuffles the output. What we mean is that with notations, , and Ai={x∈Fpn|TrFpn/Fpm(x)=αi}, where Fpm={0,αi|0≤i≤pm−2} (α is a primitive element of Fpm), then, writing b=αi0, the partition corresponding to bTrFpn/Fpm is now A0,Ai+i0(modpm−1). Using this and the transitivity of the traces, then Trm(b(cDaF)) is also balanced. We record this in the next proposition.

It is obvious that not all c-differential bent1 functions from Fpn→Fpm come from traces of permutations on Fpn (we can see that by taking a trace function F of a PcN G, as above, and then interchanging output points with the same trace output value). More precisely, we take Fpm={0,αi|0≤i≤pm−2} (α is a primitive element of Fpm) and random Ai,Aj, i≠j, as above. We now define H(x)=F(x), unless x∈A1∪A2, when H(x)=αj, if x∈Ai and H(x)=αi, if x∈Ai.

Classical (binary) bent functions do not transfer easily in this generalized bent context. To argue that claim, we next show that Maiorana-McFarland bents cannot be c-differential bent1 for c≠1.