Feature Squeezing is a recently proposed defense method which reduces the search space available to an adversary by coalescing samples that correspond to many different feature vectors in the original space into a single sample. It has been shown that feature squeezing defenses can be combined in a joint detection framework to achieve high detection rates against state-of-the-art attacks. However, we demonstrate on the MNIST and CIFAR-10 datasets that by increasing the adversary strength of said state-of-the-art attacks, one can bypass the detection framework with adversarial examples of minimal visual distortion. These results suggest for proposed defenses to validate against stronger attack configurations. 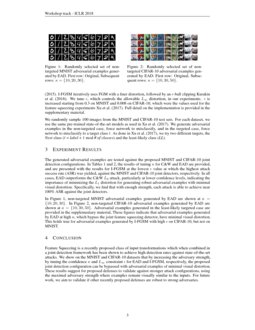 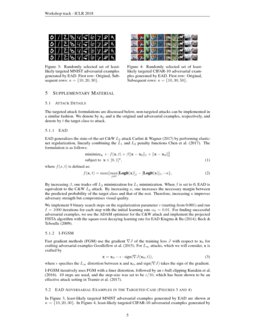 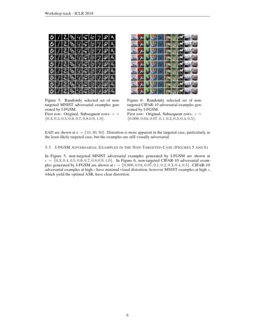 Deep neural networks (DNNs) achieve state-of-the-art performance in various tasks in machine learning and artificial intelligence, such as image classification, speech recognition, machine translation and game-playing. Despite their effectiveness, recent studies have illustrated the vulnerability of DNNs to adversarial examples

Szegedy et al. (2013); Goodfellow et al. (2015). For instance, a carefully designed perturbation to an image can lead a well-trained DNN to misclassify. Even worse, effective adversarial examples can also be made virtually indistinguishable to human perception. Adversarial examples crafted to evade a specific model can even be used to mislead other models trained for the same task, exhibiting a property known as transferability Liu et al. (2016); Papernot et al. (2016); Sharma & Chen (2017).

To address this problem, numerous defense mechanisms have been proposed; one which has achieved strong results is feature squeezing. Feature squeezing relies on applying input transformations to reduce the degrees of freedom available to an adversary by “squeezing” out unnecessary input features. The authors in

Xu et al. (2017) propose a detection method using such input transformations by relying on the intuition that if the original and squeezed inputs produce substantially different outputs from the model, the input is likely to be adversarial. By comparing the difference between predictions with a selected threshold value, the system is designed to output the correct prediction for legitimate examples and reject adversarial inputs. By combining multiple squeezers in a joint detection framework, the authors claim that the system can can successfully detect adversarial examples from eleven state-of-the-art methods Xu et al. (2017).

In this paper, we show that by increasing the adversary strength of the state-of-the-art methods, the feature squeezing joint detection method can be readily bypassed. We demonstrate this on both the MNIST and CIFAR-10 datasets. We experiment with EAD Chen et al. (2017), a generalization of the state-of-the-art C&W L2 attack Carlini & Wagner (2017), and I-FGSM Kurakin et al. (2016), an iterative version of the often used fast gradient L∞ attack Goodfellow et al. (2015). For EAD, and C&W, we increase the adversary strength by increasing κ

, which controls the necessary margin between the predicted probability of the target class and that of the rest. For I-FGSM, we increase the adversary strength by increasing

Two types of feature squeezing were focused on by the authors in Xu et al. (2017): (i) reducing the color bit depth of images; and (ii) using smoothing (both local and non-local) to reduce the variation among pixels. For the detection method, the model’s original prediction is compared with the prediction on the squeezed sample using the L1 norm. As a defender typically does not know the exact attack method, multiple feature squeezers are combined by outputting the maximum distance. The threshold is selected targeting a false positive rate below 5% by choosing a threshold that is exceeded by no more than 5% of legitimate samples.

β controls the trade-off between L1 and L2 minimization. We test EAD in both the general case and the special case where β is set to 0, which is equivalent to the C&W L2 attack. For MNIST and CIFAR-10, β was set to 0.01 and 0.001, respectively. We tune κ, which is a confidence parameter that controls the necessary margin between the predicted probability of the target class and that of the rest, in our experiments. κ is increased starting from 10 on both datasets, which was the value used in the feature squeezing experiments Xu et al. (2017). Full detail on the implementation is provided in the supplementary material.

For L∞ attacks, which we will consider, fast gradient methods (FGM) use the sign of the gradient ∇J of the training loss J with respect to the input for crafting adversarial examples Goodfellow et al. (2015). I-FGSM iteratively uses FGM with a finer distortion, followed by an ϵ-ball clipping Kurakin et al. (2016). We tune ϵ, which controls the allowable L∞ distortion, in our experiments. ϵ is increased starting from 0.3 on MNIST and 0.008 on CIFAR-10, which were the values used for the feature squeezing experiments Xu et al. (2017). Full detail on the implementation is provided in the supplementary material.

We randomly sample 100 images from the MNIST and CIFAR-10 test sets. For each dataset, we use the same pre-trained state-of-the-art models as used in Xu et al. (2017). We generate adversarial examples in the non-targeted case, force network to misclassify, and in the targeted case, force network to misclassify to a target class t. As done in Xu et al. (2017), we try two different targets, the Next class (t = label + 1 mod # of classes) and the least-likely class (LL).

The generated adversarial examples are tested against the proposed MNIST and CIFAR-10 joint detection configurations. In Tables 1 and 2, the results of tuning κ for C&W and EAD are provided, and are presented with the results for I-FGSM at the lowest ϵ value at which the highest attack success rate (ASR) was yielded, against the MNIST and CIFAR-10 joint detectors, respectively. In all cases, EAD outperforms the C&W L2 attack, particularly at lower confidence levels, indicating the importance of minimizing the L1 distortion for generating robust adversarial examples with minimal visual distortion. Specifically, we find that with enough strength, each attack is able to achieve near 100% ASR against the joint detectors.

Feature Squeezing is a recently proposed class of input transformations which when combined in a joint detection framework has been shown to achieve high detection rates against state-of-the-art attacks. We show on the MNIST and CIFAR-10 datasets that by increasing the adversary strength, by tuning the confidence κ and L∞ constraint ϵ for EAD and I-FGSM, respectively, the proposed joint detection configuration can be bypassed with adversarial examples of minimal visual distortion. These results suggest for proposed defenses to validate against stronger attack configurations, using the maximal adversary strength where examples remain visually similar to the inputs. For future work, we aim to validate if other recently proposed defenses are robust to strong adversaries.

The targeted attack formulations are discussed below, non-targeted attacks can be implemented in a similar fashion. We denote by x0 and x the original and adversarial examples, respectively, and denote by t the target class to attack.

where f(x,t) is defined as:

By increasing β, one trades off L2 minimization for L1 minimization. When β is set to 0, EAD is equivalent to the C&W L2 attack. By increasing κ, one increases the necessary margin between the predicted probability of the target class and that of the rest. Therefore, increasing κ improves adversary strength but compromises visual quality.

We implement 9 binary search steps on the regularization parameter c (starting from 0.001) and run I=1000 iterations for each step with the initial learning rate α0=0.01. For finding successful adversarial examples, we use the ADAM optimizer for the C&W attack and implement the projected FISTA algorithm with the square-root decaying learning rate for EAD Kingma & Ba (2014); Beck & Teboulle (2009).

Fast gradient methods (FGM) use the gradient ∇J of the training loss J with respect to x0 for crafting adversarial examples Goodfellow et al. (2015). For L∞ attacks, which we will consider, x is crafted by

where ϵ specifies the L∞ distortion between x and x0, and sign(∇J) takes the sign of the gradient.

I-FGSM iteratively uses FGM with a finer distortion, followed by an ϵ-ball clipping Kurakin et al. (2016). 10 steps are used, and the step-size was set to be ϵ/10, which has been shown to be an effective attack setting in Tramèr et al. (2017).

5.2 EAD Adversarial Examples in the Targeted Case (Figures 3 and 4)

5.3 I-FGSM Adversarial Examples in the Non-Targeted Case (Figures 5 and 6)