This paper describes our system submitted to SemEval 2019 Task 7: RumourEval 2019: Determining Rumour Veracity and Support for Rumours, Subtask A (Gorrell et al., 2019). The challenge focused on classifying whether posts from Twitter and Reddit support, deny, query, or comment a hidden rumour, truthfulness of which is the topic of an underlying discussion thread. We formulate the problem as a stance classification, determining the rumour stance of a post with respect to the previous thread post and the source thread post. The recent BERT architecture was employed to build an end-to-end system which has reached the F1 score of 61.67 the competition, without any hand-crafted features, only 0.2 winner. 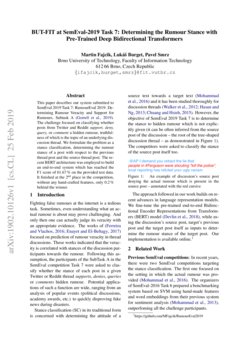 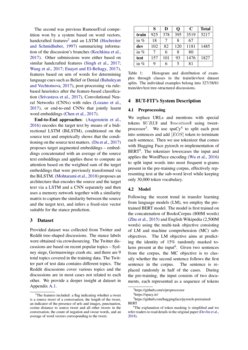 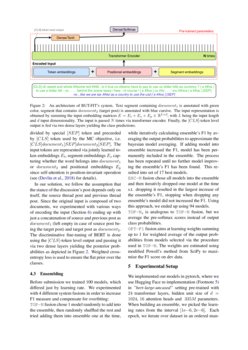 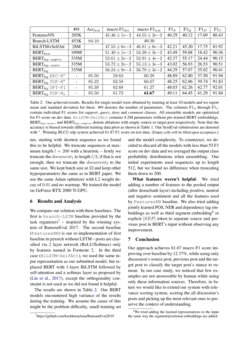 Fighting false rumours at the internet is a tedious task. Sometimes, even understanding what an actual rumour is about may prove challenging. And only then one can actually judge its veracity with an appropriate evidence. The works of Ferreira and Vlachos (2016); Enayet and El-Beltagy (2017) focused on prediction of rumour veracity in thread discussions. These works indicated that the veracity is correlated with stances of the discussion participants towards the rumour. Following this assumption, the participants of the SubTask A in the SemEval competition Task 7 were asked to classify whether the stance of each post in a given Twitter or Reddit thread supports, denies, queries or comments hidden rumour. Potential applications of such a function are wide, ranging from an analysis of popular events (political discussions, academy awards, etc.) to quickly disproving fake news during disasters.

Stance classification (SC) in its traditional form is concerned with determining the attitude of a source text towards a target text Mohammad et al. (2016) and it has been studied thoroughly for discussion threads Walker et al. (2012); Hasan and Ng (2013); Chuang and Hsieh (2015). However, the objective of SemEval 2019 Task 7 is to determine the stance to hidden rumour which is not explicitly given (it can be often inferred from the source post of the discussion – the root of the tree-shaped discussion thread – as demonstrated in Figure 1). The competitors were asked to classify the stance of the source post itself too.

The approach followed in our work builds on recent advances in language representation models. We fine-tune the pre-trained end-to-end Bidirectional Encoder Representations from Transformers (BERT) model Devlin et al. (2018), while using the discussion’s source post, target’s previous post and the target post itself as inputs to determine the rumour stance of the target post. Our implementation is available online.111www.github.com/MFajcik/RumourEval2019

. The organizers of SemEval-2016 Task 6 prepared a benchmarking system based on SVM using hand-made features and word embeddings from their previous system for sentiment analysis

The second was previous RumourEval competition won by a system based on word vectors, handcrafted features

222The features included: a flag indicating whether a tweet is a source tweet of a conversation, the length of the tweet, an indicator of the presence of urls and images, punctuation, cosine distance to source tweet and all other tweets in the conversation, the count of negation and swear words, and an average of word vectors corresponding to the tweet. and an LSTM Hochreiter and Schmidhuber (1997) summarizing information of the discussion’s branches Kochkina et al. (2017). Other submissions were either based on similar handcrafted features Singh et al. (2017); Wang et al. (2017); Enayet and El-Beltagy (2017), features based on sets of words for determining language cues such as Belief or Denial Bahuleyan and Vechtomova (2017)

, post-processing via rule-based heuristics after the feature-based classification

Provided dataset was collected from Twitter and Reddit tree-shaped discussions. The stance labels were obtained via crowdsourcing. The Twitter discussions are based on recent popular topics – Sydney siege, Germanwings crash etc. and there are 9 total topics covered in the training data. The Twitter part of test data contains different topics. The Reddit discussions cover various topics and the discussions are in most cases not related to each other. We provide a deeper insight at dataset in Appendix A.1.

We replace URLs and mentions with special tokens $URL$ and $mention$ using tweet-processor333https://github.com/s/preprocessor. We use spaCy444https://spacy.io/ to split each post into sentences and add [EOS]

token to terminate each sentence. Then we use tokenizer that comes with Hugging Face pytorch re-implementation of BERT

to split input words into most frequent n-grams present in the pre-training corpus, effectively representing text at the sub-word level while keeping only 30,000 token vocabulary.

Following the recent trend in transfer learning from language models (LM), we employ the pre-trained BERT model. The model is first trained on the concatenation of BooksCorpus (800M words)

Zhu et al. (2015) and English Wikipedia (2,500M words) using the multi-task objective consisting of LM and machine comprehension (MC) sub-objectives. The LM objective aims at predicting the identity of 15% randomly masked tokens present at the input666The explanation of token masking is simplified and we refer readers to read details in the original paper Devlin et al. (2018).. Given two sentences from the corpus, the MC objective is to classify whether the second sentence follows the first sentence in the corpus. The sentence is replaced randomly in half of the cases. During the pre-training, the input consists of two documents, each represented as a sequence of tokens divided by special [SEP] token and preceeded by [CLS] token used by the MC objective, i.e. [CLS]document1[SEP]document2[SEP]. The input tokens are represented via jointly learned token embeddings Et, segment embeddings Es capturing whether the word belongs into document1 or document2 and positional embeddings Ep since self-attention is position-invariant operation (see Devlin et al. (2018) for details).

In our solution, we follow the assumption that the stance of the discussion’s post depends only on itself, the source thread post and previous thread post. Since the original input is composed of two documents, we experimented with various ways of encoding the input (Section 6) ending up with just a concatenation of source and previous post as document1 (left empty in case of source post being the target post) and target post as document2. The discriminative fine-tuning of BERT is done using the [CLS]

2. Weighted cross-entropy loss is used to ensure the flat prior over the classes.

Before submission we trained 100 models, which differed just by learning rate. We experimented with 4 different system fusions in order to increase F1 measure and compensate for overfitting: TOP-N fusion chose 1 model randomly to add into the ensemble, then randomly shuffled the rest and tried adding them into ensemble one at the time, while iteratively calculating ensemble’s F1 by averaging the output probabilities to approximate the bayesian model averaging. If adding model into ensemble increased the F1, model has been permanently included in the ensemble. The process has been repeated until no further model improving the ensemble’s F1 has been found. This resulted into set of 17 best models. EXC-N fusion chose all models into the ensemble and then iterativly dropped one model at the time s.t. dropping it resulted in the largest increase of the ensemble’s F1, stopping when dropping any ensemble’s model did not increased the F1. Using this approach, we ended up using 94 models. TOP-Ns is analogous to TOP-N fusion, but we average the pre-softmax scores instead of output class probabilities. OPT-F1 fusion aims at learning weights summing up to 1 for weighted average of the output probabilities from models selected via the procedure used in TOP-N

. The weights are estimated using modified Powell’s method from SciPy to maximize the F1 score on dev data.

We implemented our models in pytorch, where we use Hugging Face re-implementation (Footnote 5) in ”bert-large-uncased” setting pre-trained with 24 transformer layers, hidden unit size of d=1024, 16 attention heads and  335M parameters. When building an ensemble, we picked the learning rates from the interval [1e−6,2e−6]

. Each epoch, we iterate over dataset in an ordered manner, starting with shortest sequence as we found this to be helpful. We truncate sequences at maximum length

and keep other hyperparameters the same as in BERT paper. We use the same Adam optimizer with L2 weight decay of

We compare our solution with three baselines. The first is branch-LSTM baseline provided by the task organizers777http://tinyurl.com/y4p5ygn7 – inspired by the winning system of RumourEval 2017. The second baseline (FeaturesNN

2. In the third case (BiLSTM+SelfAtt

), we used the same input representation as our submitted model, but replaced BERT with 1-layer BiLSTM followed by self-attention and a softmax layer as proposed by

Lin et al. (2017), except the orthogonality constraint is not used as we did not found it helpful.

The results are shown in Table 2

. Our BERT models encountered high variance of the results during the training. We assume the cause of this might be the problem difficulty, small training set and the model complexity. To counteract, we decided to discard all the models with less than 55 F1 score on dev data and we averaged the output class probability distributions when ensembling. Our initial experiments used sequences up to length 512, but we found no difference when truncating them down to 200.

What features weren’t helpful: We tried adding a number of features to the pooled output (after dense/tanh layer) including positive, neutral and negative sentiment and all the features used by FeaturesNN baseline. We also tried adding jointly learned POS, NER and dependency tag embeddings as well as third segment embedding888We tried adding the learned representations to the input the same way the segment/positional embeddings are added. or explicit [SEP] token to separate source and previous post in BERT’s input without observing any improvement.

Our approach achieves 61.67 macro F1 score improving over baseline by 12.37%, while using only discussion’s source post, previous post and the target post to classify the target post’s stance to rumour. In our case study, we noticed that few examples are not answerable by human while using only these information sources. Therefore, in future we would like to extend our system with relevance scoring system, scoring the all discussion’s posts and picking up the most relevant ones to preserve the context of understanding.

This work was supported by [Acknowledgments will be filled upon acceptance.]

For each discussion from Twitter and Reddit, the dataset contains its whole tree structure and metadata, which are different for both sites (e.g. upvotes in Reddit). When analyzing the data, we also uncovered a few anomalies: 12 data points to do not contain any text and according to organizers they were deleted by users at the time of download and been left it in place so as not to break the conversational structure, the query stance of few examples taken from subreddit DebunkThis999https://www.reddit.com/r/DebunkThis/ is strictly dependent on domain knowledge and the strict class of some examples is amibgious and they should probably be labelled with multiple classes.

Examples from subreddit DebunkThis have all the same format ”Debunk this: [statement]”, e.g. ”Debunk this: Nicotine isn’t really bad for you, and it’s the other substances that makes tobacco so harmful.”. All these examples are labelled as queries.

For instance source/previous post ”This is crazy! #CapeTown #capestorm #weatherforecast https://t.co/3bcKOKrCJB” and target post ”@RyGuySA Oh my gosh! Is that not a tornado?! Cause wow, It almost looks like one!”, officialy labelled in the test data as a comment, but we believe it might be a query as well.

The following figures 3, 4, 5, 6 contain selected insights at the attention matrices A from multi-head attention defined as (1), where Q,K∈RL×dk are matrices containing query/value vectors and dk is the key/value dimension. The insights are selected from the heads at the first layer of transformer encoder.