Bug localization (BL) from the bug report is the strategic activity of the software maintaining process. Because BL is a costly and tedious activity, BL techniques information retrieval-based and machine learning-based could aid software engineers. We propose a method for BUg Localization with word embeddings and Network Regularization (BULNER). The preliminary results suggest that BULNER has better performance than two state-of-the-art methods. 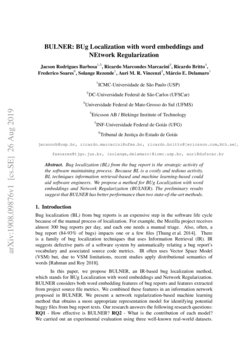 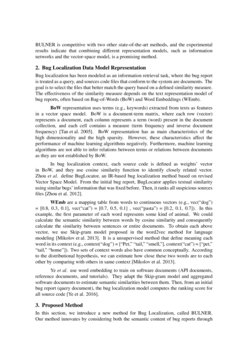 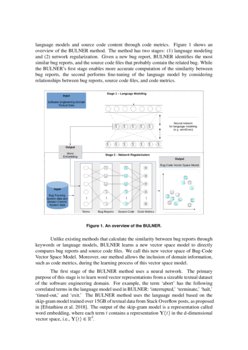 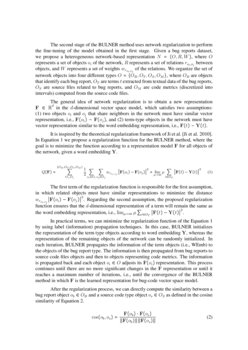 Broccoli: Bug localization with the help of text search engines

Numerous efforts have been invested in improving the effectiveness of bu...
Zhou Yang, et al. ∙

Does the duration of rapid release cycles affect the bug handling activity?

Bug localization (BL) from bug reports is an expensive step in the software life cycle because of the manual process of localization. For example, the Mozilla project receives almost 300 bug reports per day, and each one needs a manual triage. Also, often, a bug report (84-93% of bugs) impacts one or a few files [Thung2014BITSFBL]

In this paper, we propose BULNER, an IR-based bug localization method, which stands for BUg Localization with word embeddings and Network Regularization. BULNER considers both word embedding features of bug reports and features extracted from project source file metrics. We combined these features in an information network proposed in BULNER. We present a network regularization-based machine learning method that obtains a more appropriate representation model for identifying potential buggy files from bug report texts. Our research answers the following research questions:

RQ1 - How effective is BULNER? RQ2 - What is the contribution of each model? We carried out an experimental evaluation using three well-known real-world datasets. BULNER is competitive with two other state-of-the-art methods, and the experimental results indicate that combining different representation models, such as information networks and the vector-space model, is a promising method.

Bug localization has been modeled as an information retrieval task, where the bug report is treated as a query, and sources code files that conform to the system are documents. The goal is to select the files that better match the query based on a defined similarity measure. The effectiveness of the similarity measure depends on the text representation model of bug reports, often based on Bag-of-Words (BoW) and Word Embeddings (WEmb).

BoW representation uses terms (e.g., keywords) extracted from texts as features in a vector space model. BoW is a document-term matrix, where each row (vector) represents a document, each column represents a term (word) present in the document collection, and each cell contains a measure (term frequency and inverse document frequency) [ref:Tan2005]. BoW representation has as main characteristics of the high dimensionality and the high sparsity. However, these characteristics affect the performance of machine learning algorithms negatively. Furthermore, machine learning algorithms are not able to infer relations between terms or relations between documents as they are not established by BoW.

In bug localization context, each source code is defined as weights’ vector in BoW, and they use cosine similarity function to identify closely related vector. Zhou

WEmb are a mapping table from words to continuous vectors (e.g., vec(“dog”) = [0.8, 0.3, 0.1], vec(“cat”) = [0.7, 0.5, 0.1] , vec(“pasta”) = [0.2, 0.1, 0.7]). In this example, the first parameter of each word represents some kind of animal. We could calculate the semantic similarity between words by cosine similarity and consequently calculate the similarity between sentences or entire documents. To obtain each above vector, we use Skip-gram model proposed in the word2vec method for language modeling [Mikolov2013DROWAP]

. It is a unsupervised method that define meaning each word in its context (e.g., context(“dog”) = [“Pet,” “tail,” “smell,”], context(“cat”) = [“pet,” “tail,” “home”]). Two sets of context words also have common conceptually. According to the distributional hypothesis, we can estimate how close these two words are to each other by comparing with others in same context

Ye et al. use word embedding to train on software documents (API documents, reference documents, and tutorials). They adapt the Skip-gram model and aggregated software documents to estimate semantic similarities between them. Then, from an initial bug report (query document), the bug localization model computes the ranking score for all source code [Ye2016FWETDS].

In this section, we introduce a new method for Bug Localization, called BULNER. Our method innovates by considering both the semantic content of bug reports through language models and source code content through code metrics. Figure 1

shows an overview of the BULNER method. The method has two stages: (1) language modeling and (2) network regularization. Given a new bug report, BULNER identifies the most similar bug reports, and the source code files that probably contain the related bug. While the BULNER’s first stage enables more accurate computation of the similarity between bug reports, the second performs fine-tuning of the language model by considering relationships between bug reports, source code files, and code metrics.

The first stage of the BULNER method uses a neural network. The primary purpose of this stage is to learn word vector representations from a sizeable textual dataset of the software engineering domain. For example, the term ‘abort’ has the following correlated terms in the language model used in BULNER: ‘interrupted,’ ‘terminate,’ ‘halt,’ ‘timed-out,’ and ‘exit.’ The BULNER method uses the language model based on the skip-gram model trained over 15GB of textual data from Stack Overflow posts, as proposed in

The second stage of the BULNER method uses network regularization to perform the fine-tuning of the model obtained in the first stage. Given a bug reports dataset, we propose a heterogeneous network-based representation N=(O,R,W), where O represents a set of objects oi of the network, R represents a set of relations roi,oj between objects, and W represents a set of weights wroi,oj of the relations. We organize the set of network objects into four different types O={OB,OT,OS,OM}, where OB are objects that identify each bug report, OT are terms t extracted from textual data of the bug reports, OS are source files related to bug reports, and OM are code metrics (discretized into intervals) computed from the source code files.

It is inspired by the theoretical regularization framework of Ji et al. [Ji2010GRTCOH]. In Equation 1 we propose a regularization function for the BULNER method, where the goal is to minimize the function according to a representation model F for all objects of the network, given a word embedding Y.

After the regularization process, we can directly compute the similarity between a bug report object ob∈OB and a source code type object os∈OS as defined in the cosine similarity of Equation 2.

To evaluate our approach, we obtained data from three open source projects: AspectJ, Birt, and Tomcat. We extracted bug report data associated with each project from the Bugzilla repository provided by Ye et al. [Ye2014LTRRFF], while we mined each project’s repository (located in GitHub) to obtain code-related metrics. For each bug report, we checked out a before-fix version of the source code from Github. Then, we used Understand™111Understand™: https://scitools.com/. to calculate different code metrics (object-oriented, volume and complexity metrics).

We consider two methods in the literature for experimental evaluation. The first uses only the BoW model and cosine similarity to retrieve similar bug reports and related source files [Zhou2012WSTBB]. The second combines the BoW model and WEmb models [Ye2016FWETDS].

Table 1 shows the best method’s performance (max MAP performance independent of combination factor) for the three datasets. The results suggest that BULNER is the best method for the three datasets. BULNER achieves this result by combining BoW with WEmb and Network Regularization. It receives as input a heterogeneous network (N), and it treats each type of objects and links separately. Moreover, BULNER minimizes classification error when preserving consistency for each relation graph (R) by applying graph regularization [Ji2010GRTCOH]

. A statistical analysis of the results (Student’s t-Tests with 95% confidence) does not allow us to state that the BULNER method is significantly superior to other methods, mainly due to the few data sets used in the experimental evaluation.

5.2 RQ2: What is the contribution of each method?

We evaluate the contributions of each method by the combination factor (α). In Figure 2, when α=0, all methods have the performance equal to baseline (BoW+Cosine), but when we increment α, each method has different behavior. In general, BULNER has better performance for: AspectJ when 0.15 < α < 0.3; Birt when α = 0.1 and Tomcat when 0.05 < α < 0.1. These variations between software project occur because each one has its context.

Regarding Internal validity, as only bug reports with “resolved” status were selected (because they represent bug reports that span the entire life cycle), the proposed model did not consider an immature bug report, such as those newly created by stakeholders. This restriction may have an impact on the performance of the proposed model. Regarding External validity, the results of this study can not be generalized to proprietary software since only Open Source software projects were analyzed. Finally, concerning Conclusion validity, we choose dataset provided by Ye et al. that is largely used to maximize the quality of the data collected.

Wen et al. define an IR-based bug localization model that combining three models: the natural language model, code entity names model, and Boosting model [Wen2016LLBFSC]. In our work, we also evaluate the impact of combining models. Firstly, we only used the embedding model in BULNER, and then we incremental added value of regularization and combined it with the embedding model.

We proposed a method BULNER, which locates bugs in terms of source files from bug reports and source code data. Our method is competitive with two other state-of-the-art methods. BULNER is very promising. In one case, it can recommend the 30% suspicious file within top 5 for one bug report. For future works, we intend to compare our work with different types of network embedding methods, for example, network embedding with side information or advanced information preserving network embedding. Additionally, we plan to extend our dataset with source code change genealogy and evaluate the impact on the performance of the methods. Our BULNER source code, as well as the datasets used, are publicly available at https://github.com/jacsonrbinf/bulner.