In this article we study the allocation of a budget to promote an opinion in a group of agents. We assume that their opinion dynamics are based on the well-known voter model. We are interested in finding the most efficient use of a budget over time in order to manipulate a social network. We address the problem using the theory of discounted Markov decision processes. Our contributions can be summarized as follows: (i) we introduce the discounted Markov decision process in our cases, (ii) we present the corresponding Bellman equations, and, (iii) we solve the Bellman equations via backward programming. This work is a step towards providing a solid formulation of the budget allocation in social networks. 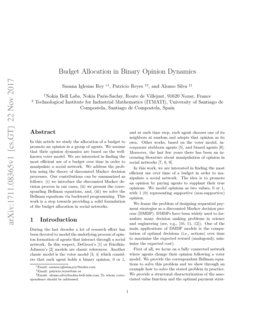 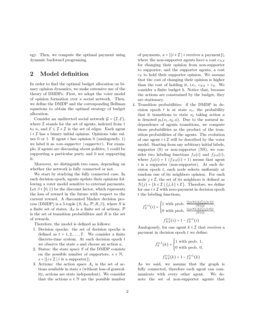 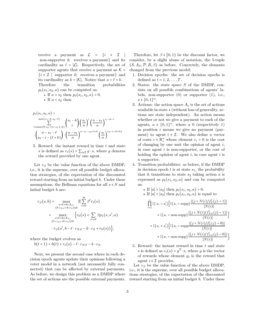 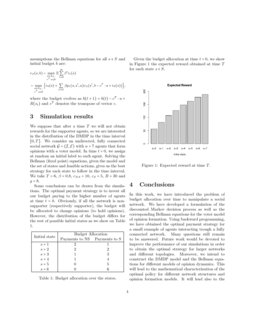 One of the key features of this paper is that the agents' opinion of a s...
Vineeth S. Varma, et al. ∙

We study the convergence of Markov Decision Processes made of a large nu...
Nicolas Gast, et al. ∙

Reinforcement Learning with Almost Sure Constraints

In this work we address the problem of finding feasible policies for Con...
Agustin Castellano, et al. ∙

Learning the Arrow of Time

We humans seem to have an innate understanding of the asymmetric progres...
Nasim Rahaman, et al. ∙

The budget is the key means for effecting policy in democracies, yet its...
Ehud Shapiro, et al. ∙

During the last decades a lot of research effort has been devoted to model the underlying process of opinion formation of agents that interact through a social network. In this respect, DeGroot’s [1] or Friedkin-Johnsen’s [2] models are classic references. Another classic model is the voter model [3, 4] which considers that each agent holds a binary opinion, 0 or 1, and at each time step, each agent chooses one of its neighbors at random and adopts that opinion as its own. Other works, based on the voter model, incorporate stubborn agents [5], and biased agents [6]. Moreover, the last few years there has been an increasing literature about manipulation of opinion in social networks [7, 8, 9].

In this work, we are interested in finding the most efficient use over time of a budget in order to manipulate a social network. The idea is to promote an opinion by paying agents to supplant their true opinions. We model opinions as two values, 0 or 1, with 1 (0) representing supportive (non-supportive) opinion.

We frame the problem of designing sequential payment strategies as a discounted Markov decision process (DMDP). DMDPs have been widely used to formulate many decision making problems in science and engineering (see, e.g., [10, 11, 12]). One of the main applications of DMDP models is the computation of optimal decisions (i.e., actions) over time to maximize the expected reward (analogously, minimize the expected cost).

First of all, we focus on a fully connected network where agents change their opinion following a voter model. We provide the correspondent Bellman equations to solve this problem and we show through an example how to solve the stated problem in practice. We provide a structural characterization of the associated value function and the optimal payment strategy. Then, we compute the optimal payment using dynamic backward programing.

In order to find the optimal budget allocation on binary opinion dynamics, we make extensive use of the theory of DMDPs. First, we adopt the voter model of opinion formation over a social network. Then, we define the DMDP and the corresponding Bellman equations to obtain the optimal strategy of budget allocation.

Consider an undirected social network G=(I,E), where I stands for the set of agents, indexed from 1 to n, and E⊆I×I is the set of edges. Each agent i∈I has a binary initial opinion. Opinions take values 0 or 1. If agent i has opinion 0 (analogously, 1) we label it as non-supporter (supporter). For example, if agents are discussing about politics, 1 could be supporting a particular party and 0 not supporting it.

Moreover, we distinguish two cases, depending on whether the network is fully connected or not.

We start by studying the fully connected case. In each decision epoch, agents update their opinions following a voter model sensitive to external payments. Let

β∈[0,1) be the discount factor, which represents the loss of reward in the future with respect to the current reward. A discounted Markov decision process (DMDP) is a 5-tuple (S,AS,P,R,β), where S is a finite set of states, AS is a finite set of actions, P

is the set of transition probabilities and

R is the set of rewards.

Therefore, the model is defined as follows:

Let υβ be the value function of the above DMDP, i.e., it is the supreme, over all possible budget allocation strategies, of the expectation of the discounted reward starting from an initial budget b. Under these assumptions, the Bellman equations for all s∈S and initial budget b are:

where the budget evolves as

Next, we present the second case where in each decision epoch agents update their opinions following a voter model in a network (not necessarily fully connected) that can be affected by external payments. As before, we design this problem as a DMDP where the set of actions are the possible external payments.

Therefore, let β∈[0,1) be the discount factor, we consider, by a slight abuse of notation, the 5-tuple (S,AS,P,R,β) as before. Concretely, the elements changed from the previous model:

Let υβ be the value function of the above DMDP, i.e., it is the supreme, over all possible budget allocations strategies, of the expectation of the discounted reward starting from an initial budget b. Under these assumptions the Bellman equations for all s∈S and initial budget b are:

where the budget evolves as b(t+1)=b(t)−cT⋅a+R(st) and cT denotes the transpose of vector c.

We suppose that after a time T we will not obtain rewards for the supporter agents, so we are interested in the distribution of the DMDP in the time interval [0,T]. We consider an undirected, fully connected social network G=(I,E) with n=7 agents that form opinions with a voter model. In time t=0, we assign at random an initial label to each agent. Solving the Bellman (fixed point) equations, given the model and the set of states and feasible actions, gives us the best strategy for each state to follow in the time interval. We take T=6, β=0.8, cNS=10, cS=5, B=30 and g=8.

Some conclusions can be drawn from the simulations. The optimal payment strategy is to invest all our budget paying to the higher number of agents at time t=0. Obviously, if all the network is non-supporter (respectively supporter), the budget will be allocated to change opinions (to hold opinions). However, the distribution of the budget differs for the rest of possible initial states as we show on Table 1.

Given the budget allocation at time t=0, we show in Figure 1 the expected reward obtained at time T for each state s∈S.

In this work, we have introduced the problem of budget allocation over time to manipulate a social network. We have developed a formulation of the discounted Markov decision process as well as the corresponding Bellman equations for the voter model of opinion formation. Using backward programming, we have obtained the optimal payment strategy for a small example of agents interacting trough a fully connected network. Many questions still remain to be answered. Future work would be devoted to improve the performance of our simulations in order to obtain the optimal strategy for larger networks and different topologies. Moreover, we intend to construct the DMDP model and the Bellman equations for different models of opinion dynamics. This will lead to the mathematical characterization of the optimal policy for different network structures and opinion formation models. It will lead also to the characterization of the most important agents (the agents with highest benefit-cost ratio) which should be related with its centrality as shown in previous results [9, 7].

The work of A. Silva and S. Iglesias Rey was partially carried out at LINCS (www.lincs.fr).