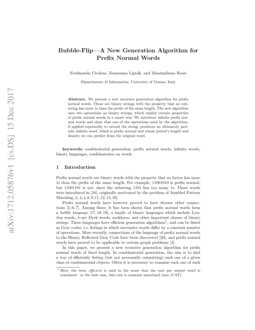 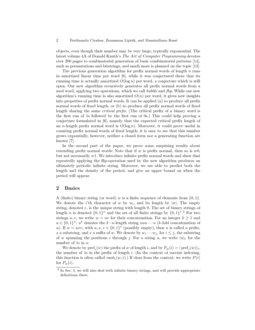 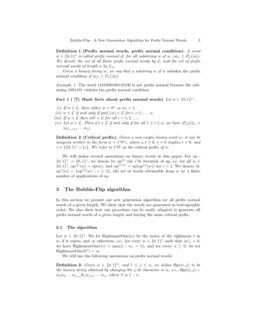 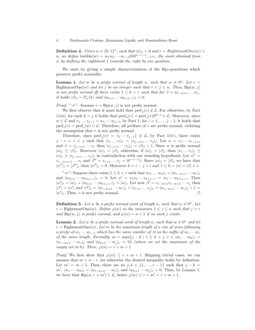 , originally motivated by the problem of Jumbled Pattern Matching

While both algorithms generate prefix normal words recursively, they differ in fundamental ways. The algorithm of [7] is an application of a general schema for generating bubble languages, using a language-specific oracle. It generates separately the sets of prefix normal words with fixed weight d, i.e. all prefix normal words of length n containing d 1s. The computation tree is not binary, since each word w can have up to t children, where t is the number of 0s in the first run of 0s of w. The algorithm uses an additional linear size data structure which it inherits from the parent node and modifies for the current node. A basic feature of the computation tree is that all words have the same fixed suffix, in other words, for the subtree rooted in the word w=1s0tγ, all nodes are of the form vγ, for some v.

In contrast, our new algorithm generates all prefix normal words of length n (except for 0n and 10n−1) in one single recursive call, starting from 110n−2. The computation tree is binary, since each word can have at most two children, namely the one produced by the operation bubble, and the one by flip. Finally, for certain words w, the words in the subtree rooted in w have the same critical prefix as w. This last property allows us to explore the sets of prefix normal words with fixed critical prefix.

Part of the results of the present paper were presented in a preliminary form in [11].

A (finite) binary word (or string) w is a finite sequence of elements from {0,1}. We denote the i’th character of w by wi, and its length by |w|. Note that we index words from 1. The empty word, denoted ε, is the unique word with length 0. The set of binary words of length n is denoted {0,1}n and the set of all finite words by {0,1}∗. For two words u,v, we write w=uv for their concatenation. For an integer k≥1 and u∈{0,1}n, uk denotes the k⋅n-length word uuu⋯u (k-fold concatenation of u). If w=uxv, with u,x,v∈{0,1}∗ (possibly empty), then u is called a prefix, x a factor (or substring), and v a suffix of w. We denote by wi⋯wj, for i≤j, the factor of w spanning the positions i through j. For a word u, we write |u|1 for the number of 1s in u. We denote by ≤lex the lexicographic order between words.

We denote by prefi(w) the prefix of w of length i, and by Pw(i)=|prefi(w)|1, the number of 1s in the prefix of length i. (In the context of succinct indexing, this function is often called rank1(w,i).) If clear from the context, we write P(i) for Pw(i).

Next, we give some basic facts about prefix normal words which will be needed in the following.

We will define several operations on binary words in this paper. For an operation op:{0,1}∗→{0,1}∗, we denote by op(i) the i’th iteration of op. We denote by op∗(w)={op(i)(w)∣i≥1}, the set of words obtainable from w by a finite number of applications of op.

To close this section, we briefly discuss combinatorial Gray codes. Recall that a Gray code is a listing of all bitstrings (or binary words) of length n such that two successive words differ by exactly one bit. In other words, a Gray code is a sequence w(1),w(2),…,w(2n)∈{0,1}n such that dH(w(i),w(i+1))=1 for i=1,…,2n−1, where dH(x,y)=|{1≤j≤n:xj≠yj}| is the Hamming distance between two equal-length words x and y.

This definition has been generalized in several ways, we give a definition following [21, ch. 5].

In particular, given a listing of the elements of a binary language S⊆{0,1}n, such that each two subsequent words have Hamming distance bounded by a constant, then this listing is a combinatorial Gray code for S. Note that the specifier ’combinatorial’ is often dropped, so the term Gray code is frequently used in this more general sense.

Let w∈{0,1}n. We let r(w) be the largest index r such that wr=1, if it exists, and ∞ otherwise. We will use the following operations on prefix normal words:

We start by giving a simple characterization of those flip-operations which preserve prefix normality.

Let w∈Ln∖{0n} and let r=r(w). Let m be the maximum length of a run of zeros following a prefix of w1⋯wr−1 which has the same number of 1s as the suffix of w1⋯wr of the same length. Formally,

Algorithm 1 implements the idea of Lemma 2 to compute φ. For a given prefix normal word w, it finds the position r of the rightmost 1 in w. Then, for each length i such that the number of 1s in prefi(w) (counted by f) is the same as the number of 1s in wr−i+1⋯wr (counted by g), the algorithm counts the number of 0s in w following prefi(w) and sets m to the maximum of the length of such runs of 0’s. By Lemma 2 and the definition of φ it follows that min{r+m+1,n+1} is equal to φ, as correctly returned by Algorithm 1. It is not hard to see that the algorithm has linear running time since the two while-loops are only executed as long as i<r, and the variable i increases at each iteration of either loop. Therefore, the total number of iterations of the two loops together is upper bounded by r≤n. Thus, we have proved the following lemma:

Let w∈Ln∖{0n}. Then the following holds:

Now let x∈PN(w)∖{w} and r=r(w). We argue by cases according to the character xr.

We are now ready to give an algorithm computing all words in the set PN(w) for a prefix normal word w. The pseudocode is given in Algorithm 2. The procedure generates recursively the set PN(w) as the union of PN(flip(w,φ(w))) and PN(bubble(w)). The call to subroutine Visit() is a placeholder indicating that the algorithm has generated a new word in PN(w), which could be printed, or examined, or processed, as required. By Lemma 5 we know that Visit() is executed for each word in PN(w) exactly once.

In order to ease the running time analysis, we next introduce a tree T(w) on PN(w). This tree coincides with the computation tree of Generate PN(w), but it will be useful to argue about it independently of the algorithm.

The tree PN(w) has the following easy-to-see properties.

There are three types of nodes: the root w, bubble-nodes (left children), and flip-nodes (right children).

The next lemma gives correctness, the generation order, and running time of algorithm Generate PN(w).

For w∈Ln∖{0n,10n−1}, Algorithm 2 generates all prefix normal words in PN(w) in lexicographic order in O(n) time per word.

Notice that the algorithm performs an in-order traversal of the tree T(w). Given a node v, the next node visited by the algorithm is given by:

In all three cases, the algorithm first computes φ(v), taking O(n) time by Lemma 3. In the first case, it then descends down to the leftmost descendant of the right child, which takes n−φ(v) bubble operations, in O(n) time. In the second case, the parent is reached by one operation (moving the last 1 one position to the left if v is a left child, and flipping the last 1 if v is a right child), taking O(1) time. Finally, in the third case, we have up to depth of v many steps of the latter kind, each taking constant time, so again in total O(n) time. In all three cases, we get a total of O(n) time before the next word is visited. ∎

Now we are ready to present the full algorithm generating all prefix normal words of length n, see Algorithm 3 (Bubble-Flip). It first visits the two prefix normal words 0n and 10n−1, and then generates recursively all words in Ln containing at least two 1s, from the starting word 110n−2.

The Bubble-Flip algorithm generates all prefix normal words of length n, in lexicographic order, and in O(n) time per word.

The algorithm Generate PN(w) (Algorithm 2) performs an in-order traversal of the nodes of the tree T(w). If instead we do a post-order traversal, we get a combinatorial Gray code of Ln, as we will show next. First note that the change in the traversal order can be achieved by moving line 4 in Algorithm 2 to the end of the code, resulting in Algorithm 4.

In a post-order traversal of T(w), two consecutive words have Hamming distance at most 3.

Since only the order of the tree traversal changed w.r.t. the previous algorithm, it follows immediately that the algorithm visits Ln in amortized O(n) time per word, since the overall running time is, as before, O(n|L|).

To see that the time to visit the next word is O(n), we distinguish two cases according to the type of node. If v is a flip-node, then the next node is its parent, taking O(1) time to reach. If v is a bubble-node, then we have to check whether it has a right sibling by computing φ(v′), where v′ is the parent of v, in O(n) time. If φ(v′)>n, then the next node is v′. If φ(v′)≤n, then we have to reach the leftmost descendant of flip(v′,φ(v′)), passing along the way only bubble-nodes. This takes n−φ(v′) time, so altogether O(n) time for the node v.

In Fig. 2, we give a sketch of the placement of some of the sets with same critical prefix within T(110n−2), which, as the reader will recall, contains all prefix normal words of length n except 0n and 10n−1. The nodes in the tree are labelled with the corresponding generated word, and we have highlighted the subtrees corresponding to CritSet(1,1,n), CritSet(1,t,n), CritSet(s,1,n) and CritSet(s,t,n). Let us take a closer look at CritSet(s,t,n) for s,t≥2. The word 1s0t10n−(s+t+1) is reached starting from the root 110n−2, traversing s−1 right branches (i.e. flip-branches), passing through the word 1s010n−(s+1), and then traversing t left branches (i.e. bubble-branches). The set CritSet(s,t,n) is then equal to the word 1s0t10n−(s+t+1) together with its right subtree.

Apart from revealing the recursive structure of sets of prefix normal words with the same critical prefix, the Bubble-Flip algorithm allows us to collect experimental data on the size of CritSet(s,t,n) for different values of s,t, and n. We give some of these numbers, for n=32 and small values of s, see Table 2. It was already known [7] that, for n≤50, the average critical prefix length, taken over all w∈Ln, is approximately logn; with the new algorithm we are able to generate more precise data. In Fig. 3, we plot the relative number of prefix normal words with a given critical prefix length, for lengths n=16 and n=32.