The problem of channel coding over the Gaussian multiple-input multiple-output (MIMO) broadcast channel (BC) with additive independent Gaussian states is considered. The states are known in a noncausal manner to the encoder, and it wishes to minimize the amount of information that the receivers can learn from the channel outputs about the state sequence. The state leakage rate is measured as a normalized blockwise mutual information between the state sequence and the channel outputs' sequences. We employ a new version of a state-dependent extremal inequality and show that Gaussian input maximizes the state-dependent version of Marton's outer bound. Further we show that our inner bound coincides with the outer bound. Our result generalizes previously studied scalar Gaussian BC with state and MIMO BC without state. 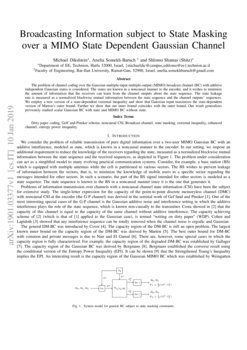 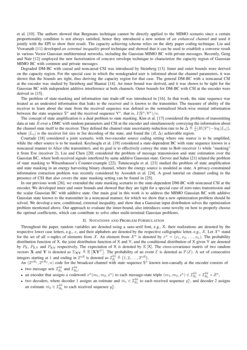 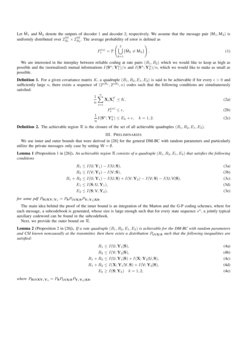 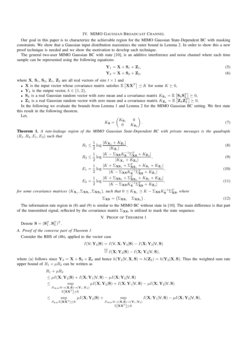 It is known that circularly symmetric Gaussian signals are the optimal i...
Christoph Hellings, et al. ∙

We study the effects of introducing a feedback channel in the two-receiv...
Louis Tan, et al. ∙

In this paper we provide a new inequality useful for the proofs of stron...
Yasutada Oohama, et al. ∙

We consider the problem of reliable transmission of pure digital information over a two-user MIMO Gaussian BC with an additive interference, modeled as state, which is known in a noncausal manner to the encoder. In our setting, we impose an additional requirement to reduce the knowledge of the receivers regarding the state, measured as a normalized blockwise mutual information between the state sequence and the received sequences, as depicted in Figure 1. The problem under consideration can act as a simplified model to many evolving practical communication systems. Consider, for example, a base station (BS) which is equipped with multiple antennas while the cell is partitioned to various sectors. The BS wishes to prevent leakage of information between the sectors, that is, to minimize the knowledge of mobile users in a specific sector regarding the messages intended for other sectors. In such a scenario, the part of the BS signal intended for other sectors is modeled as a state sequence. The state sequence is known to the BS in a noncausal manner since it is the one that generates it.

Problems of information transmission over channels with a noncausal channel state information (CSI) have been the subject for extensive study. The single-letter expression for the capacity of the point-to-point discrete memoryless channel (DMC) with noncausal CSI at the encoder (the G-P channel) was derived in the seminal work of Gel’fand and Pinsker [1]. One of the most interesting special cases of the G-P channel is the Gaussian additive noise and interference setting in which the additive interference plays the role of the state sequence, which is known non-causally to the transmitter. Costa showed in [2] that the capacity of this channel is equal to the capacity of the same channel without additive interference. The capacity achieving scheme of [2] (which is that of [1] applied to the Gaussian case), is termed “writing on dirty paper" (WDP). Cohen and Lapidoth [3] showed that any interference sequence can be totally removed when the channel noise is ergodic and Gaussian.

proof technique and showed that it can be used to establish a converse result in various Vector Gaussian multiterminal networks, including the Gaussian MIMO BC with private messages. Recently, Geng and Nair

[12] employed the new factorization of concave envelope technique to characterize the capacity region of Gaussian MIMO BC with common and private messages.

Degraded DM-BC with causal and noncausal CSI was introduced by Steinberg [13]. Inner and outer bounds were derived on the capacity region. For the special case in which the nondegraded user is informed about the channel parameters, it was shown that the bounds are tight, thus deriving the capacity region for that case. The general DM-BC with a noncausal CSI at the encoder was studied by Steinberg and Shamai [14]. An inner bound was derived, and it was shown to be tight for the Gaussian BC with independent additive interference at both channels. Outer bounds for DM-BC with CSI at the encoder were derived in [15].

The concept of state amplification is a dual problem to state masking. Kim et al. [17] considered the problem of transmitting data at rate R over a DMC with random parameters and CSI at the encoder and simultaneously conveying the information about the channel state itself to the receiver. They defined the channel state uncertainty reduction rate to be Δ≜1n(H(Sn)−log|Ln|), where |Ln| is the receiver list size in list decoding of the state, and found the (R,Δ) achievable region.

Courtade [18] considered a joint scenario, with two-encoder source coding setting where one source is to be amplified, while the other source is to be masked. Koyluoglu et al. [19] considered a state-dependent BC with state sequence known in a noncausal manner to Alice (the transmitter), and its goal is to effectively convey the state to Bob (receiver 1) while "masking" it from Eve (receiver 2). Liu and Chen [20]

considered the problem of message transmission and state estimation over the Gaussian BC, where both received signals interfered by same additive Gaussian state. Grover and Sahai

[21] related the problem of state masking to Witsenhausen’s Counter-example [22]. Tutuncuoglu et al. [23] studied the problem of state amplification and state masking in an energy harvesting binary channel, where the energy source is modeled as state. A privacy-constrained information extraction problem was recently considered by Asoodeh et al. [24]. A good tutorial on channel coding in the presence of CSI that also covers the state masking setting can be found in [25].

In our previous work [26], we extended the state masking scenario to the state-dependent DM-BC with noncausal CSI at the encoder. We developed inner and outer bounds and showed that they are tight for a special case of zero-rates transmission and the scalar Gaussian BC with additive state. Our main goal in this work is to address the MIMO Gaussian BC with additive Gaussian state known to the transmitter in a noncausal manner, for which we show that a new optimization problem should be solved. We develop a new, conditional, extremal inequality, and show that a Gaussian input distribution solves the optimization problem mentioned above. Our approach to evaluate the inner-bound, also introduces some novelty on how to properly choose the optimal coefficients, which can contribute to solve other multi-terminal Gaussian problems.

Throughout the paper, random variables are denoted using a sans-serif font, e.g.,

. The probability distribution function of

, the joint distribution function of

X and Y, and the conditional distribution of X given Y are denoted by PX, PX,Y and PX|Y respectively. The expectation of X is denoted by E[X]. The cross-covariance matrix of two random vectors X and Y is denoted as ΣXY≜E[XYT]. The probability of an event E is denoted as P(E). A set of consecutive integers starting at 1 and ending in 2nR is denoted as I(n)R≜{1,2,…,2nR}.

An (2nR1,2nR2,n) code for the broadcast channel with state sequence Sn known non-causally at the encoder consists of

Let ^M1 and ^M2 denote the outputs of decoder 1 and decoder 2, respectively. We assume that the message pair (M1,M2)

I(n)R1×I(n)R2. The average probability of error is defined as

For a given covariance matrix K, a quadruple (R1,R2,E1,E2) is said to be achievable if for every ϵ>0 and sufficiently large n, there exists a sequence of (2nR1,2nR2,n) codes such that the following conditions are simultaneously satisfied:

The achievable region R is the closure of the set of all achievable quadruples (R1,R2,E1,E2).

We use inner and outer bounds that were derived in [26] for the general DM-BC with random parameters and particularly utilize the private messages only case by setting W=∅.

An achievable region R consists of a quadruple (R1,R2,E1,E2) that satisfies the following conditions

The main idea behind the proof of the inner bound is an integration of the Marton and the G-P coding schemes, where for each message, a subcodebook is generated, whose size is large enough such that for every state sequence sn, a jointly typical auxiliary codeword can be found in the subcodebook.

Next, we provide the outer bound on R.

If a rate quadruple (R1,R2,E1,E2) is achievable for the DM-BC with random parameters and CSI known noncausally at the transmitter, then there exists a distribution PUVX|S such that the following inequalities are satisfied:

Our goal in this paper is to characterize the achievable region for the MIMO Gaussian State-Dependent BC with masking constraints. We show that a Gaussian input distribution maximizes the outer bound in Lemma 2. In order to show this a new proof technique is needed and we show the motivation to develop such technique.

The general two-user MIMO Gaussian BC with state [10], is an additive interference and noise channel where each time sample can be represented using the following equations:

In the following we evaluate the bounds from Lemma 1 and Lemma 2 for the MIMO Gaussian BC setting. We first state this result in the following theorem.

A rate-leakage region of the MIMO Gaussian State-Dependent BC with private messages is the quadruple (R1,R2,E1,E2) such that

The information rate region in (8) and (9) is similar to the MIMO BC without state in [10]. The main difference is that part of the transmitted signal, reflected by the covariance matrix ΣXS, is utilized to mask the state sequence.

V-a Proof of the converse part of Theorem 1

Consider the RHS of (4b), applied to the vector case

where (a) follows since Y2=X+S2+Z2 and hence . Thus the weighted sum rate upper bound of R1+μR2 can be written as

and the second term is simply

As for the difference between mutual informations, we obtain

Next we proceed to lower bound the leakage rates for k∈{1,2}

The conditional differential entropy can be upper bounded as follows

where the second equality is due to Sylvester’s Identity Theorem. The middle determinant in the last equality can be further reformulated as follows

which concludes the proof of the converse part of Theorem 1.

V-B Proof of the direct part of Theorem 1

The main idea for this choice of coefficients is to eliminate the state variables from the mutual information terms in Lemma 1. The complete proof is given in Appendix A.

holds iff PX|VS∼N(0,KX1) with the same KX1 for every (V=v,S=s) and KX1+KZ1 is proportional to KZ. The problem is that the proportionality condition is not always satisfied. Hence we introduce the enhanced channel

and the following proportionality condition is satisfied

where the constant F is introduced to make the optimum value of the objective functions of PG, which is P constrained to conditional Gaussian PX|VS, and ~P coincide.

In this paper we addressed the problem of simultaneous communication and state masking over a MIMO Gaussian BC with additive interference modeled as state and given as a noncausal CSI to the encoder. We developed a new conditional extremal inequality in order to characterize the achievable region for the private messages scenario. Moreover, the standard results of point-to-point masking [16] and state-dependent BC [14] (no masking requirements), emerge as special cases of the bounds here. An extension to the MIMO Gaussian BC with an additional common message is under current study.

With these definitions and applying Lemma 1, the achievability of R2 in the RHS of (9) can be shown as follows:

In order to obtain the WDP property, we require that V−MV|Y2Y2 would not contain S1 or S2, hence

We proceed by requiring that MV|Y2 would be the MMSE estimator of X2 given X1+X2+Z2,

Similarly, the RHS of (8) can be achieved as follows:

We proceed by requiring that MU|Y1 would be the MMSE estimator of X1 given X1+Z1, hence

We proceed to show achievability of E2 in the RHS of (11). Consider the achievable masking rate in (3),

First we show that the second mutual information term is zero