The harnessing of modern computational abilities for many-body wave-function representations is naturally placed as a prominent avenue in contemporary condensed matter physics. Specifically, highly expressive computational schemes that are able to efficiently represent the entanglement properties of many-particle systems are of interest. In the seemingly unrelated field of machine learning, deep network architectures have exhibited an unprecedented ability to tractably encompass the dependencies characterizing hard learning tasks such as image classification. However, key questions regarding deep learning architecture design still have no adequate theoretical answers. In this paper, we establish a Tensor Network (TN) based common language between the two disciplines, which allows us to offer bidirectional contributions. By showing that many-body wave-functions are structurally equivalent to mappings of ConvACs and RACs, we construct their TN equivalents, and suggest quantum entanglement measures as natural quantifiers of dependencies in such networks. Accordingly, we propose a novel entanglement based deep learning design scheme. In the other direction, we identify that an inherent re-use of information in state-of-the-art deep learning architectures is a key trait that distinguishes them from TNs. We suggest a new TN manifestation of information re-use, which enables TN constructs of powerful architectures such as deep recurrent networks and overlapping convolutional networks. This allows us to theoretically demonstrate that the entanglement scaling supported by these architectures can surpass that of commonly used TNs in 1D, and can support volume law entanglement in 2D polynomially more efficiently than RBMs. We thus provide theoretical motivation to shift trending neural-network based wave-function representations closer to state-of-the-art deep learning architectures. 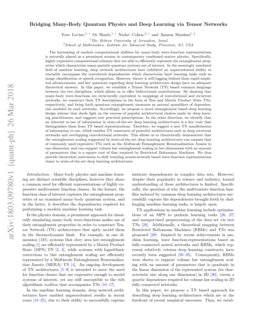 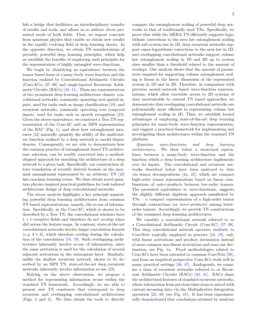 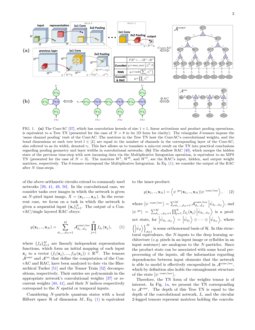 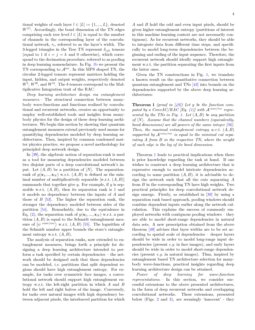 Appendix A A.“No-Cloning” in Tensor Networks

The required operation of duplicating a vector and sending it to be part of two different calculations, which is simply achieved in any practical setting, is actually impossible to represent in the framework of TNs. We formulate this notion in the following claim:

Let v∈RP,P∈N be a vector. v is represented by a node with one leg in the TN notation. The operation of duplicating this node, i.e.  forming two separate nodes of degree 1, each equal to v, cannot be achieved by any TN.

Proof. We assume by contradiction that there exists a TN ϕ which operates on any vector v∈RP and clones it to two separate nodes of degree 1, each equal to v, to form an overall TN representing v⊗v. Component wise, this implies that ϕ upholds ∀v∈RP: ∑Pi=1ϕijkvi=vjvk. By our assumption, ϕ duplicates the standard basis elements of RP, denoted {^e(α)}Pα=1, meaning that ∀α∈[P]:

By definition of the standard basis elements, the left hand side of Eq. (5) takes the form ϕαjk while the right hand side equals 1 only if j=k=α, and otherwise 0. In other words, in order to successfully clone the standard basis elements, Eq. (5) implies that ϕ must uphold ϕαjk=δαjk. However, for v=1, i.e. ∀j∈[P]: vj=1, a cloning operation does not take place when using this value of ϕ, since ∑Pi=1ϕijkvi=∑Pi=1δijk=δjk≠1=vivj, in contradiction to ϕ duplicating any vector in RP.

Appendix B B. Entanglement Scaling in Overlapping-Convolutional Networks

In this section we provide a detailed description of overlapping convolutional networks that include spatial decimation, and then provide our proof of Theorem 1 of the main text. Additionally, we analyze the effect of the added decimating pooling layers on the entanglement entropy.

We begin by presenting a broad definition of a what is called a Generalized Convolutional (GC) layer (Sharir and Shashua, 2018) as a fusion of a 1×1 linear operation with a pooling (spatial decimation) function – this view of convolutional layers is motivated by the all-convolutional architecture (Springenberg et al., 2015), which replaces all pooling layers with convolutions with stride greater than 1. The input to a GC layer is an order 3 tensor, having width and height equal to H(in)∈N and depth r(in)∈N, also referred to as channels, e.g. the input could be a 2D image with RGB color channels. Similarly, the output of the layer has width and height equal to H(out)∈N and r(out)∈N channels, where H(out)=H(in)S for S∈N that is referred to as the stride, and has the role of a sub-sampling operation. Each spatial location (i,j) at the output of the layer corresponds to a 2D window slice of the input tensor of size R×R×r(in), extended through all the input channels, whose top-left corner is located exactly at (i⋅S,j⋅S), where R∈N is referred to as its local receptive field, or filter size. For simplicity, the parts of window slices extending beyond the boundaries have zero value. Let y∈Rr(out) be a vector representing the channels at some location of the output, and similarly, let x(1),…,x(R2)∈Rr(in) be the set of vectors representing the slice, where each vector represents the channels at its respective location inside the R×R window, then the operation of a GC layer is defined as follows:

where W(1),…,W(R2)∈Rr(out)×r(in) are referred to as the weights of the layer, and g:Rr(out)×⋯×Rr(out)→Rr(out) is some point-wise pooling function. Additionally, we call a GC layer that is limited to unit-stride and has K×K receptive field a K×K Conv layer, and similarly, a P×P Pooling layer is a GC layer with both stride and receptive fields equal to P×P. With the above definitions, a convolutional network is simply a sequence of L blocks of Conv and Pooling layers that follows the representation layer, and ends with a global pooling layer, i.e. a pooling layer with P equals the entire spatial extent of its input. The entire network is illustrated in Fig. 4.

Given a non-linear point-wise activation function

σ(⋅) (e.g. ReLU), then setting all pooling functions to average pooling followed by the activation, i.e. g(x(1),…,x(R2))c=σ(∑R2i=1x(i)c) for c∈[D(out)], give rise to the common all-convolutional network with σ(⋅) activations, which served as the initial motivation for this formulation. Alternatively, choosing instead a product pooling function, i.e. g(x(1),…,x(R2))c=∏R2i=1x(i)c for c∈[D(out)], results in an Arithmetic Circuit, i.e. a circuit containing just product and sum operations, hence it is referred to as an Overlapping Convolutional Arithmetic Circuit, or Overlapping ConvAC in short, where ‘overlapping’ refers to having receptive fields which overlap when K>1. The non-overlapping case, where K=1, is equivalent to ConvACs as originally introduced by Cohen et al. (2016a).

In the body of the paper we have discussed the entanglement entropy of overlapping convolutional networks with no spatial decimation, which essentially amount to having pooling layers with P=1, which was summarized in Theorem 1 of the main text. The following theorem quantifies the effect of pooling layers with P=2 in overlapping convolutional networks:

For an overlapping ConvAC with 2d pooling operations in between convolution layers (Fig. 4 with P=2), the maximal entanglement entropy w.r.t. (A,B) modeled by the network obeys:

where α is the linear dimension of the d-dimensional system for d=1,2.

Thus, the introduction of such pooling layers results in a diminished ability of the overlapping-convolutional network to represent volume-law entanglement scaling, since the KL factor from Theorem 1 of the main text is diminished to a factor of K. In the following, we prove the results in Theorem 1 of the main text and Theorem 3 in this appendix regarding entanglement scaling supported by overlapping ConvACs:

Proof (of Theorem 1 of the main text and Theorem 3 above). We begin by providing a succinct summary of the theoretical analysis of overlapping ConvACs that was shown by Sharir and Shashua (2018), including the necessary technical background on ConvACs required to understand their results. Sharir and Shashua (2018) shows lower bounds on the rank of the dup-tensor for various architectures when A is left half of the input and B the right half, in d=2, when the convolutional kernel is anchored at the corner instead of at the center like presented in this letter.

For any layer l∈[L] in a convolutional network, the local receptive field (or kernel size) K(l) is defined as the linear size of the window on which each convolutional kernel acts upon, and the stride S(l) is defined as the step size in each dimension between two neighboring windows (assumed to be 1 in this letter). The main result of Sharir and Shashua (2018) relies on two architecture dependent attributes that they referred to as the total receptive field and and the total stride of the l’th layer, defined as the projections on the input layer of the local receptive fields and strides from the perspective of the l’th layer, as illustrated in Fig. 5. In their main result they show that the first layer that has a total receptive field of at least half the linear dimension of the input size N, denoted l0, gives rise to a lower bound on the rank of the matricized tensor that is proportional to min{M,r0,…,rL−1}O(\nicefracN24⋅T(l0)S), where T(l0)S is the total stride of the l0’th layer. To prove this result the authors rely on the ability of a sufficiently large total receptive field to represent identity matrices between pairs of input indices, each pair comprising one index from A and one from B, where the total stride limits the maximal number of pairs as it denotes the minimal distance between any two given pairs of indices.

To prove the lower bounds on the architectures described in Theorem 1 of the main text and Theorem 3 above, it is sufficient to consider just the first ~L convolutional layers with unit strides, specifically ~L=L for the case of a sequence of Kd conv layers followed by global pooling (Fig. 4 with P=1), and ~L=1 for the case of alternating Kd conv and 2d pooling layers (Fig. 4 with P=2). Under the above, the total receptive field of the ~L’th layer is simply (K−1)⋅~L+1, which can be thought of a single large convolutional layer. Now, following the same proof sketch described above, we can use the combined convolutional layer to pair indices of A and B along the boundary between the two sets, where the size of the total receptive field determines the maximal number of pairs we can capture around each point on the boundary. In the special case of K~L>α, nearly any index of A could be paired with a unique index from B. This results in a lower bound of min{M,r0,…,rL−1}Ω(min{αd,K~Lαd−1}).

In the following, we prove the result in Theorem 2 of the main text, regarding the entanglement scaling supported by deep RACs:

Proof (of Theorem 2 of the main text). In Levine et al. (2017), a lower bound of log{(min{R,M}+\nicefracN2−1\nicefracN2)} is shown for A that is placed to the right of B and |A|=|B|=\nicefracN2, for which the size of |A| is the largest possible under the conditions of Theorem 2 of the main text. There, R is the dimension of the RAC’s hidden state. Essentially, the combinatorial dependence of the lower bound follows from the indistinguishability of duplicated indices. Given |A|≤|B|, we designate the final |A| indices of the set B to form a set B∗ which upholds by definition |B∗|=|A|. The lower bound in Theorem 2 of the main text is obtained by replacing \nicefracN2 with |A| and continuing with the same exact proof procedure as in Levine et al. (2017), applied to B∗ and A, when all the residual initial |B|−|A| indices, corresponding to the set B∖B∗, are kept fixed. Finally, for fixed R,M the binomial term (min{R,M}+|A|−1|A|) is polynomial in |A|, therefore its logarithm obeys Ω(log{|A|}).