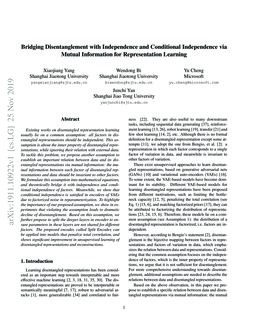 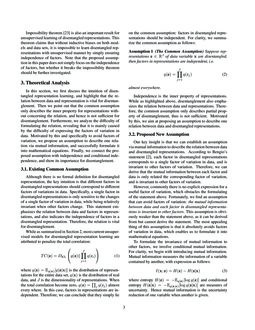 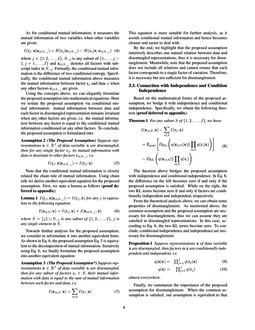 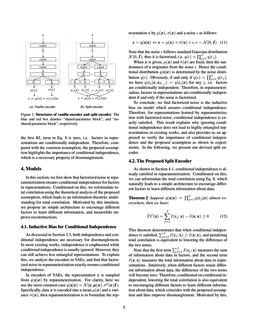 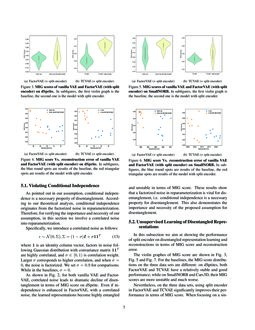 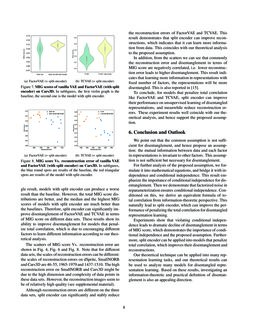 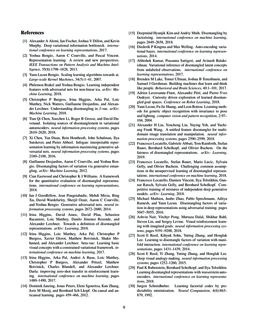 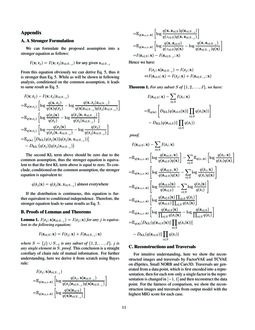 [3, 2, 18, 31, 35, 30]. The disentangled representations are proved to be interpretable or semantically meaningful [7, 17], robust to adversarial attacks [1], more generalizable [34] and correlated to fairness  [22]. They are also useful to many downstream tasks, including sequential data generating [37]

[13, 26], robot learning [19], transfer [21] and few shot learning [14, 3], etc. Although there is no formal definition for a disentangled representation except some attempts [11], we adopt the one from Bengio, et al. [3]: a representation in which each factor corresponds to a single factor of variation in data, and meanwhile is invariant to other factors of variation.

Motivated by the theoretical analysis, we propose Split Encoder to encourage different factors in representations to learn different information from data. Specifically, the deeper layers in encoder is split to ensure parameters in these layers are not shared for different factors. Moreover, the split encoder also encourages learning more information from data, thus it contributes to improving the reconstructions.

To verify our assumption, we perform experiments by violating the conditional independence and find it lead to dramatic decline of disentanglement, which demonstrates the importance of conditional independence and supports our assumption. Furthermore, experiments show that the split encoder can significantly improve disentanglement of representations learned by FactorVAE [15] and TC-VAE [6] on dSprites [12], SmallNORB [20] and Cars3D [28] data sets, and meanwhile improve reconstructions.

Our main contributions can be summarized as follows:

There are many works related to disentanglement with different objectives. A line of works focus on disentangled representations from typical types of data [37]

. Attention is paid to supervised learning

or semi-supervised learning of disentangled representations

propose variants of (Restricted) Boltzmann Machine in which interactions act to entangle the factors.

Recent studies on unsupervised learning of disentangled representations are mainly based on GANs and VAEs. In line with GANs, InfoGAN [7] penalizes the mutual information of representations, and qualitatively shows that different factors in representations correspond to different visual concepts. The authors in [4]

propose to penalize the Jensen-Shannon divergence between the distribution of representations and its factorized distribution with a discriminator, based on Independent Component Analysis.

The mainstream unsupervised models for disentangled representation learning are variants of vanilla VAE due to its stability. β-VAE [12] introduces to encourage the encoder to learn disentangled representations by penalizing the KL term in the objective of vanilla VAE. AnneledVAE [5] proposes to progressively increase the bottleneck capacity of VAE to encourage the encoder to learn different factors of variation when capacity grows. FactorVAE [15] uses a discriminator to penalize the total correlation via ratio trick to enhance independence of factors in representations. DIP-VAE [17] matches the distribution of representations with disentangled priors. In TC-VAE [6]

Impossibility theorem [23] is also an important result for unsupervised learning of disentangled representations. This theorem claims that without inductive biases on both models and data sets, it is impossible to learn disentangled representations with unsupervised manner by simply ensuring independence of factors. Note that the proposed assumption in this paper does not simply focus on the independence of factors, but whether it breaks the impossibility theorem should be further investigated.

In this section, we first discuss the intuition of disentangled representation learning, and highlight that the relation between data and representation is vital for disentanglement. Then we point out that the common assumption only describes the inner property for representations without concerning the relation, and hence is not sufficient for disentanglement. Furthermore, we analyze the difficulty of formulating the relation, revealing that it is mainly caused by the difficulty of expressing the factors of variation in data. Motivated by this and specifically to avoid factors of variation, we propose an assumption to describe one relation via mutual information, and successfully formulate it into mathematical equations. Finally, we connect the proposed assumption with independence and conditional independence, and show its importance for disentanglement.

While as summarized in Section 2, most current unsupervised models for disentangled representation learning are attributed to penalize the total correlation:

However, commonly there is no explicit expression for a useful factor of variation, which obstacles the formulating of the statement above. Fortunately, we find an assumption that can avoid factors of variation: the mutual information between data and each factor in disentangled representations is invariant to other factors. This assumption is obviously weaker than the statement above, as it can be derived from but cannot derive the statement. The most appealing thing of this assumption is that it absolutely avoids factors of variation in data, which enables us to formulate it into mathematical equations.

where entropy H(z)=−Eq(z)[logq(z)] and conditional entropy H(z|x)=−Eq(z,x)[logq(z|x)] are measures of uncertainty. Hence mutual information is the uncertainty reduction of one variable when another is given.

(The Proposed Assumption) Suppose representations z∈RJ of data variable x are disentangled, then for any single factor zj, its mutual information with data is invariant to other factors zi∈S−j, i.e.

I(zj;x|zi∈S−j)=I(%zj;x) for any j is equivalent to the following equation:

(The Proposed Assumption*) Suppose representations z∈RJ of data variable x are disentangled, then for any subset of factors zi∈S, their mutual information with data is equal to the sum of mutual information between each factor and data, i.e.

This equation is more suitable for further analysis, as it avoids conditional mutual information and hence becomes cleaner and easier to deal with.

By the end, we highlight that the proposed assumption intuitively describes one natural relation between data and disentangled representations, thus it is necessary for disentanglement. Meanwhile, note that the proposed assumption does not include all relations and cannot ensure that each factor corresponds to a single factor of variation. Therefore, it is necessary but not sufficient for disentanglement.

Based on the mathematical forms of the proposed assumption, we bridge it with independence and conditional independence. Specifically, we obtain the following theorem (proof deferred to appendix):

Suppose representations z of data variable x are disentangled, then factors in z are conditionally independent and independent, i.e.

In this section, we first show that factorized noise in reparameterization ensures conditional independence for factors in representations. Conditioned on this, we reformulate total correlation using the theoretical analysis of the proposed assumption, which leads to an information-theoretic understanding for total correlation. Motivated by this intuition, we propose an simple architecture to encourage different factors to learn different information, and meanwhile improve reconstructions.

In encoders of VAEs, the representation z is sampled from q(z|x) by reparameterization. For clarity, here we use the most common case q(z|x)=N(z;μ(x),σ2(x)I). Specifically, data x is encoded into a mean μ(x)

σ(x), then reparameterization is to formulate the representation z by μ(x), σ(x) and a noise ϵ as follows:

Note that the noise ϵ

As shown in Section 4.1, conditional independence is already satisfied in reparameterization. Conditioned on this, we can reformulate the total correlation using Eq. 8, which naturally leads to a simple architecture to encourage different factors to learn different information about data:

Suppose q(z|x)=∏Jj=1q(zj|x) almost everywhere, then we have:

This theorem demonstrates that when conditional independence is satisfied, , and penalizing total correlation is equivalent to lowering the difference of the two terms.

To achieve this, we propose Split encoder, in which the deeper layers in encoder are split to ensure that their parameters are not shared for different factors. For clarity, we call the block of these layers as “no-shared-parameter block”, while the block of others layers is named as “shared-parameter block”. The structures of vanilla encoder and split encoder are shown in Fig. 1.

The objective in this section is not only to show the proposed split encoder can improve unsupervised learning of disentangled representations, but also to verify the importance of the proposed assumption by investigating the change of disentanglement when conditional independence is violated.

Data sets: According to [23], the performance of any model on different data sets can be very different. To show the performance of split encoder, we choose three distinct data sets: dSprites [12], SmallNORB [20] and Cars3D [28]. DSprites is a set of 737,280 64*64 generated images in black and white, and the images are generated from fives independent latent factors. SmallNORB contains 24,300 image pairs of 50 3D toys produced by two cameras, each image pair is grey-scale in shape of 2*96*96. Cars3D consists of 199 colorful 3D car models in shape of 128*128*3*24*4.

Hyper parameters: For the fairness of comparisons, we use the implementation of disentanglement lib introduced by [23] without tuning. The number of factors in representations are set as 10. The weights of penalties in FactorVAE and TCVAE are set as 35 and 6 on all experiments, respectively. The code for split encoder can be found in supplemental material. For each model on any data set, we train it ten times without tuning, and record the MIG scores and reconstruction errors.

For comprehensive comparison, we report the MIG score distribution by violin graphs. The violin graph shows the distribution of points with a density plot, the median value with a white spot, interquartile range with a thick black bar, and upper and lower adjacent values with a thin black line. Furthermore, we also present the MIG scores and reconstruction errors in scatter diagrams. In this way, the reconstruction errors are clearly compared, and the raw MIG scores are shown. Images of reconstructions and traversals can be found in appendix.

As pointed out in our assumption, conditional independence is a necessary property of disentanglement. According to our theoretical analysis, conditional independence originates from the factorized noise in reparameterization. Therefore, for verifying the importance and necessity of our assumption, in this section we involve a correlated noise into reparameterization.

Specifically, we introduce a correlated noise as follows:

11T are highly correlated, and σ∈[0,1) is correlation weight. Larger σ corresponds to higher correlation, and when σ=0, the noise is factorized. We set σ=0.9 for comparisons. While in the baselines, σ=0.

The violin graphes of MIG score are shown in Fig. 3, Fig. 5 and Fig. 7. For the baselines, the MIG score distributions on the three data sets are different: on dSptites, both FactorVAE and TCVAE have a relatively stable and good performance; while on SmallNORB and Cars3D, their MIG scores are more unstable and much worse.

Nevertheless, on the three data sets, using split encoder in FactorVAE and TCVAE significantly improves their performance in terms of MIG score. When focusing on a single result, models with split encoder can produce a worse result than the baseline. However, the total MIG score distributions are better, and the median and the highest MIG scores of models with split encoder are much better than the baselines. Therefore, split encoder can significantly improve disentanglement of FactorVAE and TCVAE in terms of MIG score on different data sets. These results show its ability to improve disentanglement for models that penalize total correlation, which is due to encouraging different factors to learn different information according to our theoretical analysis.

To conclude, for models that penalize total correlation like FactorVAE and TCVAE, split encoder can improve their performance on unsupervised learning of disentangled representations, and meanwhile reduce reconstruction errors. These experiment results well coincide with our theoretical analysis, and hence support the proposed assumption.

A. A Stronger Formulation

We can formulate the proposed assumption into a stronger equation as follows:

From this equation obviously we can derive Eq. 5, thus it is stronger than Eq. 5. While as will be shown in following analysis, conditioned on the common assumption, it leads to same result as Eq. 5.

If the distribution is continuous, this equation is further equivalent to conditional independence. Therefore, the stronger equation leads to same results as Eq. 5.

B. Proofs of Lemmas and Theorems

where S={j}∪S−j is any subset of {1,2,…,J}, j is any single element in S. proof. This conclusion is a straight corollary of chain rule of mutual information. For further understanding, here we derive it from scratch using Bayes rule:

For intuitive understanding, here we show the reconstructed images and traversals by FactorVAE and TCVAE on dSprites, Small NORB and Cars3D. Traversals are generated from a data point, which is first encoded into a representation, then for each row only a single factor in the representation is changed in [−1,1] and then reconstruct the data point. For the fairness of comparison, we show the reconstruction images and traversals from output model with the highest MIG score for each case.