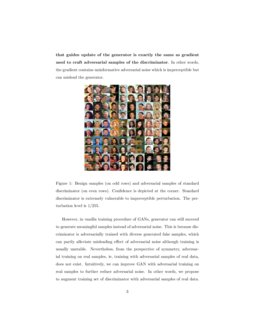 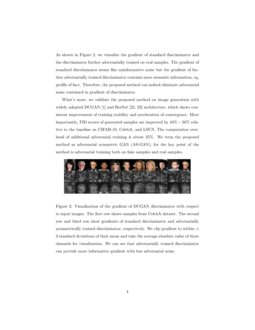 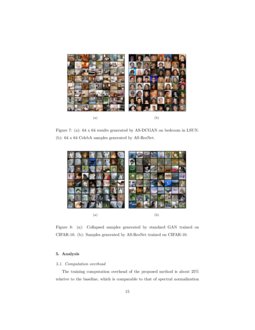 , GANs are implicit generative models with two neural networks playing min-max game to find a map from random noise to target distribution, in which the generator tries to generate fake samples to fool discriminator and the discriminator tries to distinguish them from real samples

Goodfellow2014Generative . In original GANs formula, optimal discriminator measures the Jensen-Shannon divergence between real data distribution and generated distribution. The discrepancy measure can be generalized to f-divergence nowozin2016f or replaced by earth-mover distance arjovsky2017wasserstein . Despite the success, GANs are notoriously difficult to trainkodali2018on ; arjovsky2017towards , which are very sensitive to hyper-parameters. When the support of these two distributions are approximately disjoint, gradient given by discriminator with standard objective may vanish, and training becomes unstable arjovsky2017wasserstein . More seriously, generated distribution can fail to cover the whole data distribution and collapse to a single mode in some cases dumoulin2017adversarially ; che2016mode .

The condition of discriminator determines the training stability and performance to a great extent. From a practical standpoint, representation capacity of discriminator realized by a neural network is not infinite. Meanwhile, the discriminator is usually not optimal to measure true discrepancy when trained in an alternative manner. On the other hand, discriminator as a binary classifier is also vulnerable to adversarial samples

szegedy2014intriguing ; goodfellow2015explaining , which can be validated by the experiments shown in Figure 1. Real samples added by imperceptible perturbation, eg, with a L∞ norm of 1/255, can mislead classifier to give wrong prediction. Adversarial samples can be easily crafted by gradient-based method such as Fast Gradient Sign Method (FGSM) goodfellow2015explaining and Basic Iterative Method (BIM) kurakin2017adversarial . It should be noted that the gradient given by discriminator that guides update of the generator is exactly the same as gradient used to craft adversarial samples of the discriminator. In other words, the gradient contains uninformative adversarial noise which is imperceptible but can mislead the generator.

What’s more, we validate the proposed method on image generation with widely adopted DCGAN Radford2015Unsupervised and ResNet he2015deep ; gulrajani2017improved architecture, which shows consistent improvement of training stability and acceleration of convergence. More importantly, FID scores of generated samples are improved by 10%−50% relative to the baseline on CIFAR-10, CelebA, and LSUN. The computation overhead of additional adversarial training is about 25%. We term the proposed method as adversarial symmetric GAN (AS-GAN), for the key point of the method is adversarial training both on fake samples and real samples.

There is a large body of work on how to stabilize GANs training and alleviate mode collapse. arjovsky2017towards

proved that the widely adopted non-saturating loss function for the generator can be decomposed into Kullback–Leibler divergence minus two Jensen-Shannon divergence when discriminator trained to be optimal, which accounts for training instability and mode dropping during GANs training.

metz2016unrolled proposed to unroll the optimization of discriminator as surrogate objective to guide update of the generator, which shows improvement of training stability with relatively large computation overhead. kodali2018on claimed that the existence of undesirable local equilibria is responsible for mode collapse and proposed to regularize the discriminator around real data samples with gradient penalty.

Integral probability metric (IPM) based GANs such as Wasserstein GAN

where V(θ,ϕ) is the objective function. Equation 1 can be formulated as a binary classification problem with cross entropy loss:

where Pdata is real data distribution and noise z

obeys standard Gaussian distribution. When discriminator is trained to be optimal, the training objective for the generator can be reformulated as Jensen-Shannon divergence, which can measure dissimilarity between two distributions.

In practice, we use mini-batch gradient descent to optimize generator and discriminator alternatively. At each iteration, update rule can be derived as follows:

where ηθ and ηϕ are the learning rate of discriminator and generator, respectively. Vm(θ,ϕ,x,z) denotes the objective function of mini-batch with m real samples and m fake samples, which is:

After updating parameters of networks, fake samples generated by Gϕ′(z)

are adjusted as following equation according to chain rule:

By introducing adversarial training on real samples, we generalize the original objective of GAN to the following one that forces discriminator to be robust:

In fact, when training data of real samples is infinite and the distribution of real data is continuous, the above objective is approximately equivalent to the original. However, in practice, contrary to the fake data, number of real samples is always limited, which partly accounts for the existence of adversarial samples. With the proposed objective, discriminator is not only required to classify real data correctly but also should be not vulnerable to small perturbation. In a sense, adversarial training on real samples regularizes discriminator by augmenting training data, which can smooth the decision boundary of discriminator. Moreover, the capability of two networks become more balanced. This can prevent discriminator from being too strong to alleviate training collapse.

For the purpose of evaluating our method and investigating the reason behind its efficacy, we test our adversarial training method on image generation on CIFAR-10, CelebA, and LSUN with DCGAN and ResNet architecture. CIFAR-10 is a well-studied dataset of 32 x 32 natural images, containing 10 categories of objects and 60k samples. CelebA is a face attributes dataset with more than 200k images. LSUN is a large scale scene understanding dataset with 10 categories and we choose 3000k images labeled as bedroom for training. For fast validation, We resize images in CelebA and LSUN to 64 x 64. Before fed into discriminator, images are rescaled within

. Dimension of the latent vector is set to 100 for all implementations.

In ResNet architecture, the residual block is organized as BatchNorm-ReLU-Resample-Conv-BatchNorm-ReLU-Conv with skip connection. We use bilinear interpolation for upsampling and average pooling for downsampling. Batch normalization

Ioffe2015Batch is used for both generator and discriminator. Parameters of network are initialized by Xavier method glorot2010understanding .

In DCGAN architecture, the basic block is organized as Conv-BatchNorm-LeakyReLU for discriminator and ConvTransposed-BatchNorm-ReLU for generator. The weights of convolution are initialized by normal distribution with zero mean and 0.02 standard deviation. We do not use bias for convolution.

We implement models by Pytorch with acceleration of RTX 2080ti GPUs. We train networks with Adam optimizer

In this paper, we use Fréchet inception distance (FID) Heusel2017GANs and inception score Salimans2016Improved to measure model performance, both of which are well-studied metric of image modeling. Our source code is available on Github https://github.com/CirclePassFilter/AS_GAN.

In this section, we conduct experiments on how perturbation level affects performance improvement. Specifically, we do unsupervised image generation on CIFAR-10 with DCGAN architecture in different settings of perturbation level. Due to the large searching space, we select several typical values for experiments such as {0,1,2,3,4}/255. All experiments are run three times independently to reduce effect of randomness.

Shown as Figure 4, our method performs better than the baseline when ε lies in interval 0.5/255∼3/255. FID score can be improved by 10% with perturbation of 1/255. However, when the perturbation level is too tiny (ε=0.2/255), the method improves original model marginally. On this condition, the effect of adversarial training is limited. Remarkably, when the imposed perturbation is too strong, the model performs even worse than the baseline. This is because discriminator recognizes degraded samples as real data and can not provide correct gradient to update generator.

Above all, with appropriate perturbation, discriminator can be regularized to be more robust, facilitating itself to produce more accurate and informative gradient. In this way, generator obtains more reliable gradient, which can alleviate collapse of training and improve fidelity of generated samples.

In addition, we plot the training curve of FID on CIFAR-10 as shown in Figure 5. In particular, when ε is zero, the proposed method degrades to updating discriminator twice on the same real data, result of which is comparable to the baseline and much worse than the setting with appropriate perturbation. This indicates that performance improvement provided by the proposed method does not attribute to additional update of discriminator. Furthermore, we do another experiment in which gradient used to craft perturbation is replaced by Gaussian noise. FID score of this setting is slightly worse than the baseline, which indicates that perturbation of gradient direction instead of random direction is a key factor that makes the proposed method effective.

To explore the compatibility of the proposed method, we test it with widely adopted DCGAN and ResNet architecture on CIFAR-10 and CelebA. Figure 6 plots the comparison results. With the proposed method, FID scores on CelebA is improved significantly and convergence is also accelerated. Even with the setting in which vanilla GANs collapse, our model can still converge stablely.

As shown in Table 1, through unsupervised training on CIFAR-10, CelebA and bedroom in LSUN, the proposed method with spectral normalization can achieve comparable performance to state of the art. It should be noted that the six rows at the bottom show the results of our implementation. Generated samples are shown in Figure 7.

The training computation overhead of the proposed method is about 25% relative to the baseline, which is comparable to that of spectral normalization and much smaller than that of gradient penalty. Comparison of average training time of one epoch of different methods is shown in Table 2.

The relationship between GANs and adversarial samples has been a open question since both models emerged. In this paper, we analyze that adversarial training on fake samples is already taken into account in standard GAN training, but adversarial training on real samples does not exist, which can make training unbalanced and unstable. This is because gradient given by non-robust discriminator contains more adversarial noise, which can mislead update of the generator. In order to make training scheme symmetric and make discriminator more robust, we introduce adversarial training on real samples. We validate the proposed method on image generation on CIFAR-10, CelebA, and LSUN with varied network architectures. Experiments show that the gradient of adversarially trained discriminator contains less adversarial noise. Convergence speed and performance are improved with additional 25% computation overhead. Moreover, mode collapse is alleviated. The proposed method with spectral normalization can achieve comparable FID to state of the art on these datasets.