Breaking the borders: an investigation of cross-ecosystem software packages

Software ecosystems are collections of projects that are developed and evolve together in the same environment. Existing literature investigates software ecosystems as isolated entities whose boundaries do not overlap and assumes they are self-contained. However, a number of software projects are distributed in more than one ecosystem. As different aspects, e.g., success, security vulnerabilities, bugs, etc., of such cross-ecosystem packages can affect multiple ecosystems, we investigate the presence and characteristics of these cross-ecosystem packages in 12 large software distributions. We found a small number of packages distributed in multiple packaging ecosystems and that such packages are usually distributed in two ecosystems. These packages tend to better support with new releases certain ecosystems, while their evolution can impact a multitude of packages in other ecosystems. Finally, such packages appear to be popular with large developer communities. 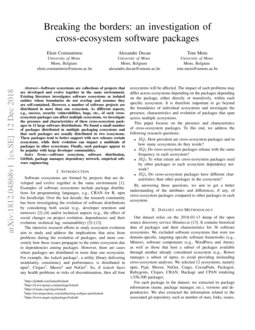 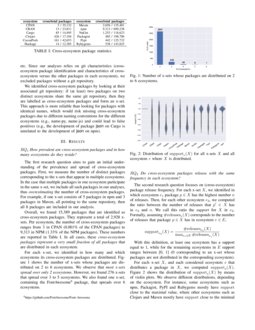 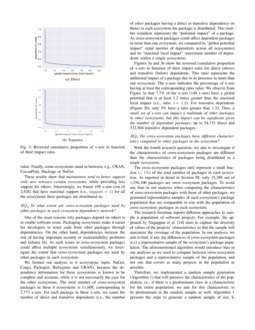 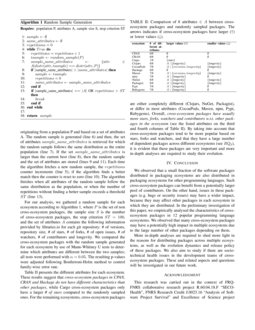 Small World with High Risks: A Study of Security Threats in the npm Ecosystem

The popularity of JavaScript has lead to a large ecosystem of third-part...
Markus Zimmermann, et al. ∙

How do Software Ecosystems Co-Evolve? A view from OpenStack and beyond

Much research that analyzes the evolution of a software ecosystem is con...
José Apolinário Teixeira, et al. ∙

On The Relation Between Outdated Docker Containers, Severity Vulnerabilities and Bugs

Extracting Insights from the Topology of the JavaScript Package Ecosystem

Software ecosystems have had a tremendous impact on computing and societ...
Nuttapon Lertwittayatrai, et al. ∙

ROOT is a large code base with a complex set of build-time dependencies;...
Oksana Shadura, et al. ∙

The PETSc Community Is the Infrastructure

Software for enumerative and analytic combinatorics

Software ecosystems are formed by projects that are developed and evolve together in the same environment [1]. Examples of software ecosystems include package distributions for programming languages, e.g., CRAN for R, npm for JavaScript. Over the last decade, the research community has been investigating the evolution of software distributions by considering both social (e.g., developer retention and turnover) [2, 3, 4] and/or technical aspects (e.g., the effect of social changes on project evolution, dependencies and their evolution, technical lag, sustainability) [5, 6, 7, 8, 9, 10, 11, 12, 13].

The intensive research efforts to study ecosystem evolution aim to study and address the implications that arise from problems during the evolution of packages, and more concretely how these issues propagate to the entire ecosystem due to dependencies among packages. However, there are cases where packages are distributed in more than one ecosystem. For example, the lodash package111https://github.com/lodash/lodash, a utility library delivering modularity, consistency and performance, is distributed in npm222https://www.npmjs.com/package/lodash, Clojars333https://clojars.org/cljsjs/lodash, Maven444https://mvnrepository.com/artifact/org.webjars.npm/lodash and NuGet555https://www.nuget.org/packages/lodash/. So, if lodash faces any health problems or risks of discontinuation, then all four ecosystems will be affected. The impact of such problems may differ across ecosystems depending on the packages depending on the package, either directly or transitively, within each specific ecosystem. It is therefore important to go beyond the boundaries of individual ecosystems and investigate the presence, characteristics and evolution of packages that span across multiple ecosystems.

This paper focuses on the presence and characteristics of cross-ecosystem packages. To this end, we address the following research questions:

By answering these questions, we aim to get a better understanding of the attributes and differences, if any, of cross-ecosystem packages compared to other packages in each ecosystem.

Our dataset relies on the 2018-03-13 dump of the open source discovery service libraries.io [14]. It contains historical data of packages and their characteristics for 36 software ecosystems. We excluded software ecosystems that were too domain-specific, targeting specific software frameworks (e.g., Meteor), software components (e.g., WordPress and Atom), as well as those that host a subset of packages available through another already considered ecosystem (e.g., Bower manages a subset of npm), to avoid providing misleading cross-ecosystem analyses. We selected 12 ecosystems, namely npm, Pypi, Maven, NuGet, Cargo, CocoaPods, Packagist, Rubygems, Clojars, CRAN, Hackage and CPAN totalizing 1,556,300 packages.

For each package in the dataset, we extracted its package information (name, package manager, etc.), versions and dependencies. We also extracted the information related to the associated git repository, such as number of stars, forks, issues, etc. Since our analyses relies on git characteristics (cross-ecosystem package identification and characteristics of cross-ecosystem versus the other packages in each ecosystem), we excluded packages without a git repository.

Rq1 How prevalent are cross-ecosystem packages and in how many ecosystems do they reside?

The first research question aims to gain an initial understanding of the prevalence and spread of cross-ecosystem packages. First, we measure the number of distinct packages corresponding to the x-sets that appear in multiple ecosystems. In the case that multiple packages in one ecosystem participate in the same x-set, we include all such packages in our analyses, thus overestimating the number of cross-ecosystem packages. For example, if one x-set consists of 5 packages in npm and 3 packages in Maven, all pointing to the same repository, then all 8 packages are included in our analysis.

Rq2 Do cross-ecosystem packages release with the same frequency in each ecosystem?

With this definition, at least one ecosystem has a support equal to 1, while for the remaining ecosystems in E support ranges between [0, 1] (0 corresponding to an x-set whose packages are not distributed in the corresponding ecosystem).

For each x-set X, and each considered ecosystem e that distributes a package in X, we computed supporte(X). Figure 2 shows the distribution of supporte(X) by means of violin plots. We observe different distributions, depending on the ecosystem. For instance, some ecosystems such as npm, Packagist, PyPI and Rubygems mostly have support close to the maximal value, where other ecosystems such as Clojars and Maven mostly have support close to the minimal value. Finally, some ecosystems stand in between, e.g., CRAN, CocoaPods, Hackage or NuGet.

These results show that maintainers tend to better support with new releases certain ecosystems, while providing less support for others. Interestingly, we found 109 x-sets (out of 2,928) that have maximal support (i.e., support=1) for all the ecosystems their packages are distributed in.

Rq3 To what extent are cross-ecosystem packages used by other packages in each ecosystem dependency network?

One of the main reasons why packages depend on others is to enable software reuse. Packaging ecosystems make it easier for developers to reuse code from other packages through dependencies. On the other hand, dependencies increase the risk of having important security or maintainability problems and failures [6]. As such issues in cross-ecosystem packages could affect multiple ecosystems simultaneously, we investigate the extent that cross-ecosystem packages are used by other packages in each ecosystem.

We limited our analysis to 6 ecosystems (npm, NuGet, Cargo, Packagist, Rubygems and CRAN), because the dependency information for these ecosystems is known to be complete and accurate, while it is not necessarily the case for the other ecosystems. The total number of cross-ecosystem packages in these 6 ecosystems is 11,608, corresponding to 2,773 x-sets. For each package in these x-sets, we count the number of direct and transitive dependents (i.e., the number of other packages having a direct or transitive dependency on them) in each ecosystem the package is distributed. This number somehow represents the “potential impact” of a package. As cross-ecosystem packages could affect dependent packages in more than one ecosystem, we compared its “global potential impact” (total number of dependents across all ecosystems) and its “maximal local impact” (maximum number of dependents within a single ecosystem).

Figures 2(a) and 2(b) show the reversed cumulative proportion of x-sets in function of their impact ratio for direct (above) and transitive (below) dependents. This ratio represents the additional impact of a package due to its presence in more than one ecosystem. The y-axis indicates the percentage of x-sets having at least the corresponding ratio value. We observe from Figure 2(a) that 7.7% of the x-sets (148 x-sets) have a global potential that is at least 1.2 times greater than the maximal local impact (i.e., ratio >=1.2). For transitive dependents (Figure 2(b)), only 5% have a ratio greater than 1.33. Thus, a small set of x-sets can impact a multitude of other packages in other ecosystems, but this impact can be significant given the number of dependent packages; up to 54,751 direct and 332,504 transitive dependent packages.

Rq4 Do cross-ecosystem packages have different characteristics compared to other packages in the ecosystem?

The research literature reports different approaches to sample a population of software projects. For example, the approach by Nagappan et al. [15] aims to capture the diversity of values of the projects’ characteristics so that the sample will maximize the coverage of the population. In our analysis, we aim to find, if any, the differences of cross-ecosystem packages w.r.t a representative sample of the ecosystem’s package population. The aforementioned algorithm would introduce bias in our analyses as we need to compare between cross-ecosystem packages and a representative sample of the population, and not one that covers as many projects in the population as possible.

For our analysis, we gathered a random sample for each ecosystem according to Algorithm 1, where P is the set of non cross-ecosystem packages, the sample size S is the number of cross-ecosystem packages, the stop criterion ST=100, and the set of attributes A contains the following information provided by libraries.io for each git repository: # of versions, repository size, # of stars, # of forks, # of open issues, # of watchers, # of contributors and longevity. We compared the cross-ecosystem packages with the random sample generated for each ecosystem by use of Mann-Whitney U tests to determine which attributes are different between the two samples; all tests were performed with α=0.05. The resulting p-values were adjusted following Bonferroni-Holm method to control family-wise error rate.

More in-depth analyses are required to shed more light in the reasons for distributing packages across multiple ecosystems, as well as the evolution dynamics and release policy of these packages. We also aim to study if there are socio-technical health issues in the development teams of cross-ecosystem packages. These and related aspects and questions will be investigated in our future work.

This research was carried out in the context of FRQ-FNRS collaborative research project R.60.04.18.F “SECOHealth”, FNRS Research Credit J.0023.16 “Analysis of Software Project Survival” and Excellence of Science project 30446992 SECO-Assist financed by FWO - Vlaanderen and F.R.S.-FNRS.