We establish a fundamental property of bivariate Pareto records for independent observations uniformly distributed in the unit square. We prove that the asymptotic conditional distribution of the number of records broken by an observation given that the observation sets a record is Geometric with parameter 1/2. 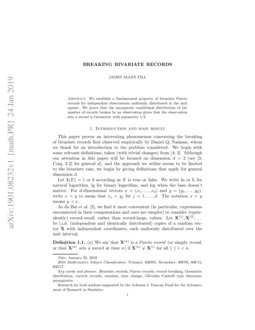 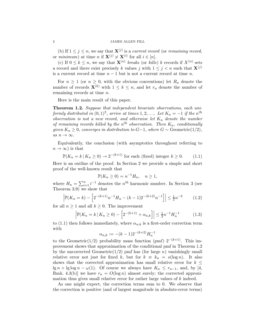 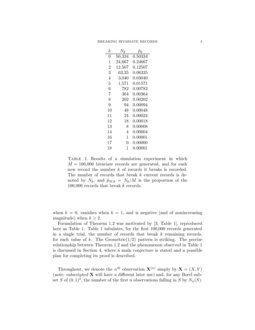 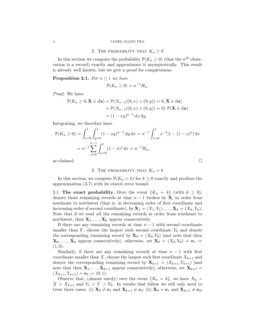 This paper proves an interesting phenomenon concerning the breaking of bivariate records first observed empirically by Daniel Q. Naiman, whom we thank for an introduction to the problem considered. We begin with some relevant definitions, taken (with trivial changes) from [4; 3]. Although our attention in this paper will be focused on dimension d=2 (see [3, Conj. 2.2] for general d), and the approach we utilize seems to be limited to the bivariate case, we begin by giving definitions that apply for general dimension d.

Let 1(E)=1 or 0 according as E is true or false. We write ln or L for natural logarithm, lg for binary logarithm, and log when the base doesn’t matter. For d

As do Bai et al. [2], we find it more convenient (in particular, expressions encountered in their computations and ours are simpler) to consider (equivalently) record-small, rather than record-large, values. Let X(1),X(2),… be i.i.d. (independent and identically distributed) copies of a random vector X with independent coordinates, each uniformly distributed over the unit interval.

Here is the main result of this paper.

Suppose that independent bivariate observations, each uniformly distributed in (0,1)2, arrive at times 1,2,…. Let Kn=−1 if the nth observation is not a new record, and otherwise let Kn denote the number of remaining records killed by the nth observation. Then Kn, conditionally given Kn≥0, converges in distribution to G−1, where G∼\rm Geometric(1/2), as n→∞.

Equivalently, the conclusion (with asymptotics throughout referring to n→∞) is that

Here is an outline of the proof. In Section 2 we provide a simple and short proof of the well-known result that

where Hn=∑ni=1i−1 denotes the nth harmonic number. In Section 3 (see Theorem 3.9) we show that

for all n≥1 and all k≥0. The improvement

to (1.1) then follows immediately, where αn,k is a first-order correction term with

Formulation of Theorem 1.2 was motivated by [3, Table 1], reproduced here as Table 1. Table 1 tabulates, for the first 100,000 records generated in a single trial, the number of records that break k remaining records, for each value of k. The Geometric(1/2) pattern is striking. The precise relationship between Theorem 1.2 and the phenomenon observed in Table 1 is discussed in Section 4, where a main conjecture is stated and a possible plan for completing its proof is described.

Throughout, we denote the nth observation X(n) simply by X=(X,Y) (note: subscripted X will have a different later use) and, for any Borel subset S of (0,1)2, the number of the first n observations falling in S by Nn(S).

2. The probability that Kn≥0

In this section we compute the probability P(Kn≥0) (that the nth observation is a record) exactly and approximate it asymptotically. This result is already well known, but we give a proof for completeness.

Integrating, we therefore have

In this section, we compute P(Kn=k) for k≥0 exactly and produce the approximation (3.7) with its stated error bound.

Over the event {Kn=k} (with k≥0), denote those remaining records at time n−1 broken by X, in order from southeast to northwest (that is, in decreasing order of first coordinate and increasing order of second coordinate), by X1=(X1,Y1),…,Xk=(Xk,Yk). Note that if we read all the remaining records in order from southeast to northwest, then X1,…,Xk appear consecutively.

X,X0,…Xk+1. We write nk–– for the falling factorial power

and we introduce the abbreviations

for sums that will appear frequently in the sequel.

We present only the proof of (i); the proofs of (ii) and (iii) are similar. We shall be slightly informal in regard to “differentials” in our presentation. The key is that the event in question (almost surely) equals the following event:

where S is the following disjoint union of rectangular regions:

which reduces easily to the claimed result. ∎

When k=0, Proposition 3.1 is naturally and correctly interpreted as follows:

To obtain an exact expression for P(Kn=k), one need only integrate out the variables x,xi in Proposition 3.1 to get

where Ak, Bk, and Ck (all of which also depend on n) correspond to parts (i), (ii), and (iii) of the proposition, respectively. For small values of k this can be done explicitly, but for general k we take an inductive approach. To get started on the induction, we first treat the case k=0.

Using Remark 3.2, we perform the computations in increasing order of difficulty. First, it is clear that C0=0 for n≥2. Next, for n≥2 we have

Finally, for n≥3 we have

the final equality after two integrations by part. Using the computation in the proof of Proposition 2.1 and the above computation of B0, for n≥3 we therefore find

Now just use (3.2) to establish the asserted expression for P(Kn=0). ∎

The expressions obtained from Proposition 3.1 for Ak, Bk, and Ck for k≥1 are easily simplified by integrating out the four variables x,xk+1,y0,y that don’t appear in the integrand (when they do appear as variables). Here is the result.

Alternative expressions involving only finite sums are available for Ak,Bk,Ck by recasting the expressions in square brackets in Lemma 3.4 as finite sums of nonnegative terms, expanding the integrand multinomially, and integrating the resulting polynomials explicitly. When this is done, one finds that Ak,Bk,Ck are all rational, as therefore are P(Kn=k) and P(Kn=k|Kn≥0).

Take Ck as an example. We have

and carrying out this procedure yields

where the indicated sum is taken over k-tuples (j1,…,jk) of nonnegative integers summing to n−(k+1) and the natural interpretation for k=0 is C0=1(n=1). Examples include

Since our aim is to compute P(Kn=0) up to additive error O(n−2) for large n, the following lemma will suffice to treat the contributions Ck.

For n≥1, the probabilities Ck≥0 satisfy

Recalling that rn denotes the number of remaining records at time n, it is clear from the description of case (iii) leading up to Proposition 3.1 that

In this subsection we establish recurrence relations for Ak and Bk in the variable k, holding n fixed and treating the probabilities Ck as known.

(i) Begin with the expression for Ak in Lemma 3.4 and integrate out the variable x0. This gives

with x0=1 in the subtracted integral. For A′k, observe that the variable y1 does not appear within the square brackets in the integrand. Thus, integrating out y1 and then shifting variable names, we find

(ii) The proof of part (ii) is similar. Begin with the expression for Bk in Lemma 3.4 and integrate out the variable yk+1. This gives (with x0=1)

For B′k, observe that the expression within {⋅} equals ∑k−1+xk−1yk, which doesn’t depend on xk. Thus, integrating out xk, we find

where the last equality follows from Lemma 3.4. We see also from Lemma 3.4 that B′′k=12Ck. This completes the proof of part (ii). ∎

The recurrence relations of Lemma 3.7 are trivial to solve in terms of the probabilities Ck and the “initial conditions” delivered by Proposition 3.3.

Clearly we have (3.5) and likewise

3.5. Approximation to the probability P(Kn=k), with error bound.