The stochastic solutions to the Wigner equation, which explain the nonlocal oscillatory integral operator Θ_V with an anti-symmetric kernel as the generator of two branches of jump processes, are analyzed. All existing branching random walk solutions are formulated based on the Hahn-Jordan decomposition Θ_V=Θ^+_V-Θ^-_V, i.e., treating Θ_V as the difference of two positive operators Θ^±_V, each of which characterizes the transition of states for one branch of particles. Despite the fact that the first moments of such models solve the Wigner equation, we prove that the bounds of corresponding variances grow exponentially in time with the rate depending on the upper bound of Θ^±_V, instead of Θ_V. In other words, the decay of high-frequency components is totally ignored, resulting in a severe numerical sign problem. To fully utilize such decay property, we have recourse to the stationary phase approximation for Θ_V, which captures essential contributions from the stationary phase points as well as the near-cancelation of positive and negative weights. The resulting branching random walk solutions are then proved to asymptotically solve the Wigner equation, but gain a substantial reduction in variances, thereby ameliorating the sign problem. Numerical experiments in 4-D phase space validate our theoretical findings. 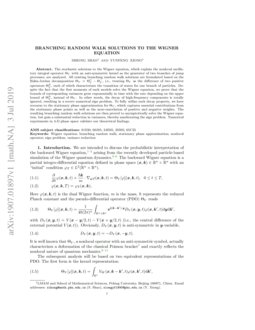 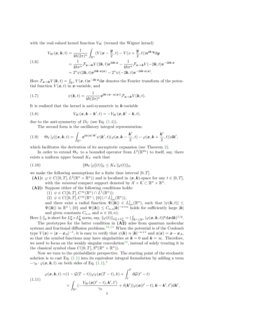 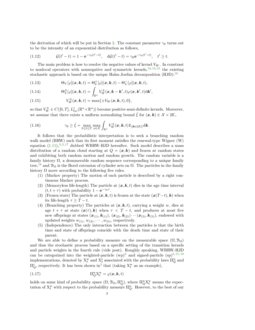 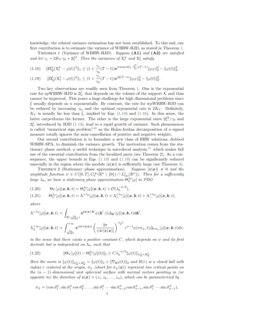 Symmetric cooperative motion in one dimension

It is well known that ΘV, a nonlocal operator with an anti-symmetric symbol, actually characterizes a deformation of the classical Poisson bracket [7] and exactly reflects the nonlocal nature of quantum mechanics [8, 9, 10, 11].

with the real-valued kernel function VW (termed the Wigner kernel)

denotes the Fourier transform of the potential function

The second form is the oscillatory integral representation:

which facilitates the derivation of its asymptotic expansion (see Theorem 2).

In order to extend ΘV to a bounded operator from L2(R2n) to itself, say, there exists a uniform upper bound KV such that

we make the following assumptions for a finite time interval [0,T].

The prototypes for the latter condition in (A2) arise from quantum molecular systems and fractional diffusion problems [12, 13]. When the potential is of the Coulomb type V(x)=|x−xA|−1, it is easy to verify that ψ(k)∝|k|−n+1 and z(x)=x−xA, so that the symbol functions may have singularities at k=0 and k=∞. Therefore, we need to focus on the weakly singular convolution [14], instead of solely treating it in the classical symbol class C([0,T],S0(Rn×Rn)).

Now we turn to the probabilistic perspective. The starting point of the stochastic solution is to cast Eq. (1.1) into its equivalent integral formulation by adding a term −γ0⋅φ(x,k,t) on both sides of Eq. (1.1) [3],

the derivation of which will be put in Section 2. The constant parameter γ0

turns out to be the intensity of an exponential distribution as follows,

The main problem is how to resolve the negative values of kernel VW. In constrast to nonlocal operators with nonnegative and symmetric kernels [12, 15, 13], the existing stochastic approach is based on the unique Hahn-Jordan decomposition (HJD) [16]:

so that V±W∈C([0,T],L1loc(Rn×Rn)) become positive semi-definite kernels. Moreover, we assume that there exists a uniform normalizing bound ˘ξ for (x,k)∈X×2K,

It follows that the probabilistic interpretation is to seek a branching random walk model (BRW) such that its first moment satisfies the renewal-type Wigner (W) equation (1.11) [17, 5, 3], dubbed WBRW-HJD hereafter. Such model describes a mass distribution of a random cloud starting at Q=(x,k)

and frozen at random states and exhibiting both random motion and random growth. The random variable is a family history

Ω, a denumerable random sequence corresponding to a unique family tree [18], and BΩ is the Borel extension of cylinder sets on Ω. The particles in the family history Ω move according to the following five rules.

We are able to define a probability measure on the measurable space (Ω,BΩ) and thus the stochastic process based on a specific setting of the transition kernels and particle weights in the fourth rule (vide post). Roughly speaking, WBRW-HJD can be categorized into the weighted-particle (wp) [3] and signed-particle (sp) [17, 5, 19] implementations, denoted by Xwt and Xst associated with the probability laws ΠwQ and ΠsQ, respectively. It has been shown in [3] that (taking Xwt as an example),

holds on some kind of probability space (Ω,BΩ,ΠwQ), where ΠwQXwt means the expectation of Xwt with respect to the probability measure ΠwQ

. However, to the best of our knowledge, the related variance estimation has not been established. To this end, our first contribution is to estimate the variance of WBRW-HJD, as stated in Theorem

Two key observations are readily seen from Theorem 1. One is the exponential rate for spWBRW-HJD is 2˘ξ, that depends on the volume of the support K and thus cannot be improved. This poses a huge challenge for high dimensional problems since ˘ξ usually depends on n exponentially. By contrast, the rate for wpWBRW-HJD can be reduced by increasing γ0, and the optimal exponential rate is 2KV. Definitely, KV is usually far less than ˘ξ, implied by Eqs. (1.10) and (1.16). In this sense, the latter outperforms the former. The other is the large exponential rates 2˘ξ2/γ0 and 2˘ξ, introduced by HJD (1.13), lead to a rapid growth of variance. Such phenomenon is called “numerical sign problem” [20] as the Hahn-Jordan decomposition of a signed measure totally ignores the near-cancellation of positive and negative weights.

Our second contribution is to formulate a new class of BRW solutions, dubbed WBRW-SPA, to diminish the variance growth. The motivation comes from the stationary phase method, a useful technique in microlocal analysis [21], which makes full use of the essential contribution from the localized parts (see Theorem 2). As a consequence, the upper bounds in Eqs. (1.18) and (1.19) can be significantly reduced especially in the region where the module |z(x)| is sufficiently large (see Theorem 3).

Suppose |z(x)|≠0 and the amplitude function ψ∈C([0,T],C∞0(Rn∖{0})∩L1loc(Rn)). Then for a sufficiently large λ0, we have a stationary phase approximation Θλ0V[φ] to PDO

in the sense that there exists a positive constant C, which depends on ψ and its first derivate but is independent on λ0, such that

and Δk′ is the central difference operator

Intuitively speaking, the parameter λ0 serves as a filter to decompose PDO into a low-frequency component Λ<λ0 and a high-frequency one, the leading terms of which are Λ>λ0±, and use the resulting nonlocal operator Θλ0V to directly formulate WBRW-SPA, instead of ΘV as adopted in WBRW-HJD. Specifically, we still use HJD to deal with Λ<λ0 and tackle Λ>λ0++Λ>λ0− by another two branches of particles, yielding two stochastic processes: the “wp” implementation Ywt and the “sp” implementation Yst, associated with the probability measures ΠwQ and ΠsQ, respectively. In order to estimate the effect of low-frequency parts, we further need the following assumptions.

The assumption (A4) indicates that the normalizing bound for V±W can be diminished when k is restricted in a smaller domain, which holds if minx∈X|z(x)| is large enough. For instance, V(x)=|x−xA|−1, it requires the displacement minx∈X|x−xA| is sufficiently large. Accordingly, we are able to show that the first moment of WBRW-SPA turns out to be an asymptotic approximation to the solution of Eq. (1.1). We also study its deviation from the dual Wigner function φ by estimating the second moment (also termed “variance” hereafter) and find that, in contrast to Eqs. (1.18) and (1.19), the exponential growth rate in the upper bound is suppressed, so that a moderate increase of variance can be achieved.

Suppose (A2)-(A4) are satisfied and let γ2=α∗˘ξ2. Then for a sufficient large λ0, there exist a weighted-particle branching random walk model Ywt and a signed-particle one Yst on the probability spaces (Ω,BΩ,ΠwQ) and (Ω,BΩ,ΠsQ), respectively, such that

and their variances satisfy

The rest is organized as follows. Section 2 briefly reviews the basic of the Wigner equation. Section 3 derives the L2-boundedness and the stationary phase approximation to PDO. WBRW-HJD and WBRW-SPA are analyzed in Sections 4 and 5, respectively. In Section 6, a typical numerical experiment is performed to verify our theoretical analysis. This paper is concluded in Section 7.

The Wigner equation, introduced by Wigner in his pioneering work [1], provides a fundamental phase space description of quantum mechanics, and quantum behavior is completely characterized by the nonlocal pseudo-differential operator ΘV[f] defined in Eq. (1.3). Mathematically speaking, it is a partial integro-differential equation defined in phase space (x,k)∈Rn×Rn

with an initial value f0∈L2(Rn×Rn). The weak formulation of the Wigner equation is of great importance since any quantum observable ⟨^A⟩(t) can be expressed by its Weyl symbol AW(x,k) averaged by the Wigner function [8], namely, ⟨^A⟩(t)=⟨AW,f(t)⟩ with

Thus it motivates to study the dual system [2] and derive the adjoint equation of Eq. (2.1) under a non-degenerate inner product:

where T is a fixed time instant and φ∈C([0,T],L2(Rn×Rn)) is a test function with a compact support in Rn×Rn. Using the anti-symmetry (1.8) of the Wigner kernel, we have

and integration by parts directly leads to

where fT and φT are short for f(x,k,T) and φ(x,k,T), respectively. Therefore the adjoint correspondence, i.e., the backward Wigner equation (1.1), is immediately derived by setting

Formally, Eq. (2.5) allows us to evaluate the quantum mechanical observable ⟨φT,fT⟩ only by the “initial” data [3].

The backward Wigner equation (1.1) can be cast into a renewal-type equation by adding a term −γ0⋅φ(x,k,t) on both sides,

with γ0 being a prescribed constant (see Eq. (1.16)), and the mild solution reads

by the variation-of-constant formula [22]. Here eΔtA is short for the semigroup generated by A=ℏk/m⋅∇x−γ0, and its action on a given function can be now readily performed. For instance, we have

where x(Δt)=x+ℏkΔt/m gives the forward-in-time trajectory of (x,k) with a positive time increment Δt. That is, the backward renewal-type equation Eq. (1.11) is thus verified.

Before proceeding to the probabilistic aspect, we first need to establish the L2-boundedness of ΘV under the assumptions (A1) and (A2). For ψ∈C([0,T],L1(Rn)), Eq. (1.10) is readily verified by Young’s convolution inequality, whereas the L2-boundedness for weakly singular kernels is obtained by the Hardy-Littlewood-Sobolev theorem [23]. After that, we present the stationary phase approximation and detail its remainder estimate.

The first term is bounded from L2(R2n) to itself as Ψ is locally integrable, say,

and the bound is independent of ε. The second term is also bounded from L2(R2n) to Lp(R2n), with 1/p=1/2+α/n, owing to the Hardy-Littlewood-Sobelev theorem,

A remarkable feature of the oscillatory integral operator is the decay property as the integrand becomes more and more oscillating. As stated by Hörmander’s theorem [21, 24], when ψ is sufficiently smooth and compactly supported, it has a sharp estimate for a sufficiently large |z(x)|

The physical meaning of Eq. (3.7) is also clear. When we consider the two-body interacting potential like V(x)=V(|x−xA|), z(x)=x−xA turns out to be the spatial displacement between two bodies, so that the estimate (3.7) characterizes the decay rate of quantum interaction as the distance |z(x)| increases. A similar result like Eq. (3.7) can also be found in our framework, and the decay property will be fully utilized by the stationary phase method as presented in Theorem 2, which is definitely ignored by HJD (1.13).

It starts by splitting the wavevector k into its modulus and orientation parts k′=rσ with the modulus r=|k′|>0 and the orientation σ=(σ1,σ2,…,σn)∈Sn−1, where Sn−1 denotes the (n−1)-dimensional spherical surface, and focusing on the high-frequency component

where σ=(σ1,⋯,σn) represents the orientation of z(x), z′=z/|z| and dσ denotes the induced Lebesgue measure on Sn−1. After choosing the equatorial plane normal to z′, the unit sphere Sn−1 can be decomposed into an upper hemisphere Sn−1+ and a lower one Sn−1− satisfying ±z′∈Sn−1±. Accordingly, the inner surface integral of the first kind over Sn−1 in Eq. (3.8) equals to the sum of those over Sn−1+ and Sn−1−. Without loss of generality, it suffices to assume that z′=(0,…,0,1), which be realized by a rotation otherwise. Let us start from the graph

and take the surface integral of the first kind over the upper hemisphere as an example. Now the phase function of the integrand becomes

For such phase function, it can be easily verified that there is only one critical point σ+=(0,…,0,1) satisfying (∇σS)(σ+)=0, and the determinant of its Hessian matrix at σ+ turns out to be