Let f:[0,1]→[0,1] be a nondecreasing function. The main goal of this work is to provide a regularized version, say f̃_L, of f. Our choice will be a best L_∞-approximation to f in the set of functions h:[0,1]→[0,1] which are Lipschitz-continuous, for a fixed Lipschitz norm bound L, and verify the boundary restrictions h(0)=0 and h(1)=1. Our findings allow to characterize a solution through a monotone best L_∞-approximation to the Lipschitz regularization of f. This is seen to be equivalent to follow the alternative way of the average of the Pasch-Hausdorff envelopes. We include results showing stability of the procedure as well as directional differentiability of the L_∞-distance to the regularized version. This problem is motivated within a statistical problem involving trimmed versions of distribution functions as to measure the level of contamination discrepancy from a fixed model. 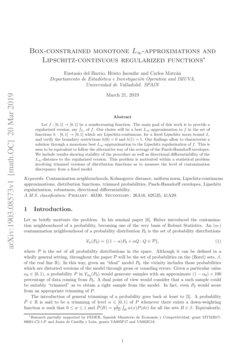 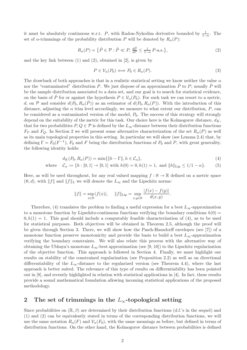 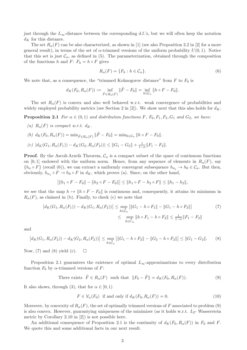 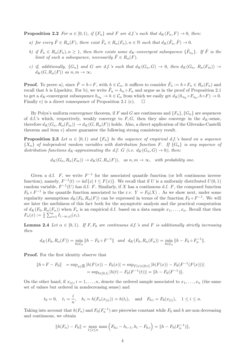 Let us briefly motivate the problem. In his seminal paper [6], Huber introduced the contamination neighbourhood of a probability, becoming one of the very basis of Robust Statistics. An (α

-) contamination neighbourhood of a probability distribution

P0 is the set of probability distributions

where P is the set of all probability distributions in the space. Although it can be defined in a wholly general setting, throughout the paper P will be the set of probabilities on the (Borel) sets, β, of the real line R). In this way, given an “ideal” model P0, the vicinity includes those probabilities which are distorted versions of the model through gross or rounding errors: Given a particular value α0∈[0,1), a probability P in Vα0(P0) would generate samples with an approximate (1−α0)×100 percentage of data coming from P0. A dual point of view would consider that a such sample could be suitably “trimmed” as to obtain a right sample from the model. In fact, even P0 would arose from an appropriate trimming of P.

The introduction of general trimmings of a probability goes back at least to [5]. A probability ~P∈R is said to be a trimming of level α∈[0,1) of P whenever there exists a down-weighting function w such that 0≤w≤1 and ~P(B)=11−α∫Bw(x)P(dx) for all the sets B∈β. Equivalently, it must be absolutely continuous w.r.t. P, with Radon-Nykodim derivative bounded by 11−α. The set of α-trimmings of the probability distribution P will be denoted by Rα(P):

The drawback of both approaches is that in a realistic statistical setting we know neither the value α nor the “contaminated” distribution P. We just dispose of an approximation ^P to P; usually ^P will be the sample distribution associated to a data set, and our goal is to search for statistical evidence, on the basis of ^P for or against the hypothesis P∈Vα(P0). For such task we can resort to a metric, d, on P and consider d(P0,Rα(^P))

as an estimator of

d(P0,Rα(P)). With the introduction of this distance, adjusting the α trim level accordingly, we measure to what extent our distribution, P, can be considered as a contaminated version of the model, P0. The success of this strategy will strongly depend on the suitability of the metric for this task. Our choice here is the Kolmogorov distance, dK, that for two probabilities P,Q∈P is defined by the L∞-distance between their distribution functions FP and FQ. In Section 2 we will present some alternative characterization of the set Rα(P) as well as its main topological properties in this setting. In particular we will show (see Lemma 2.4) that, by defining Γ=F0(F−1), F0 and F being the distribution functions of P0 and P, with great generality, the following identity holds:

Here, as will be used throughout, for any real valued mapping f:ℵ→R defined on a metric space (ℵ,d), with ∥f∥ and ∥f∥L we will denote the L∞ and the Lipschitz norms:

Therefore, (4) translates the problem to finding a useful expression for a best L∞-approximation to a monotone function by Lipschitz-continuous functions verifying the boundary conditions h(0)=0,h(1)=1. This goal should include a computably feasible characterization of (4), as to be used for statistical purposes. Both objectives will be obtained in Theorem 2.5, although the proof will be given through Section 3. There, we will show how the Pasch-Hausdorff envelopes (see [7]) of a monotone function preserve monotonicity and provide the basis to build a best L∞-approximation verifying the boundary constraints. We will also relate this process with the alternative way of obtaining the Ubhaya’s monotone L∞-best approximation (see [9, 10]) to the Lipschitz regularization of the objective function. This approach is followed in Section 4. Finally, we must highlight our results on stability of the constrained regularization (see Proposition 2.2) as well as on directional differentiability of the L∞-distance to the regularized version (see Theorem 4.4), where the last approach is better suited. The relevance of this type of results on differentiability has been pointed out in [8], and recently highlighted in relation with statistical applications in [4]. In fact, these results provide a sound mathematical foundation allowing incoming statistical applications of the proposed methodology.

2 The set of trimmings in the L∞-topological setting

The set Rα(F) can be also characterized, as shown in [1] (see also Proposition 2.2 in [2] for a more general result), in terms of the set of α-trimmed versions of the uniform probability U(0,1). Notice that this set is just Cα, as defined in (5). The parameterization, obtained through the composition of the functions h and F: Fh=h∘F gives

We note that, as a consequence, the “trimmed Kolmogorov distance” from F to F0 is

The set Rα(F) is convex and also well behaved w.r.t. weak convergence of probabilities and widely employed probability metrics (see Section 2 in [2]). We show next that this also holds for dK.

Proof. By the Ascoli-Arzelà Theorem, Cα is a compact subset of the space of continuous functions on [0,1] endowed with the uniform norm. Hence, from any sequence of elements in Rα(F), say {hn∘F} (recall (6)), we can extract a uniformly convergent subsequence hnj→h0∈Cα. But then, obviously, hnj∘F→h0∘F in dK, which proves (a). Since, on the other hand,

we see that the map h↦∥h∘F−F0∥ is continuous and, consequently, it attains its minimum in Rα(F), as claimed in (b). Finally, to check (c) we note that

Proposition 2.1 guarantees the existence of optimal L∞-approximations to every distribution function F0 by α-trimmed versions of F:

Moreover, by convexity of Rα(F), the set of optimally trimmed versions of F associated to problem (9) is also convex. However, guarantying uniqueness of the minimizer (as it holds w.r.t. L2- Wasserstein metric by Corollary 2.10 in [2]) is not possible here.

An additional consequence of Proposition 2.1 is the continuity of dK(F0,Rα(F)) in F0 and F. We quote this and some additional facts in our next result.

Proof. To prove a), since ~F=h∘F, with h∈Cα, it suffices to consider ~Fn:=h∘Fn∈Rα(Fn) and recall that h is Lipschitz. For b), we write ~Fn=hn∘Fn and argue as in the proof of Proposition 2.1 to get a dK-convergent subsequence hnk→h∈Cα from which we easily get dK(hnk∘Fnk,h∘F)→0. Finally c) is a direct consequence of Proposition 2.1 (c).  □

By Polya’s uniform convergence theorem, if F and G are continuous and {Fn},{Gn} are sequences of d.f.’s which, respectively, weakly converge to F,G, then they also converge in the dK-sense, therefore dK(Gn,Rα(Fm))→dK(G,Rα(F)) holds. Also, a direct application of the Glivenko-Cantelli theorem and item c) above guarantee the following strong consistency result.

is a uniformly distributed

U(0,1) random variable, F−1(U) has d.f. F. Similarly, if X has a continuous d.f. F, the composed function F0∘F−1 is the quantile function associated to the r.v. Y=F0(X) . As we show next, under some regularity assumptions dK(F0,Rα(F)) can be expressed in terms of the function F0∘F−1

. We will see later the usefulness of this fact both for the asymptotic analysis and the practical computation of

Let α∈[0,1). If F,F0 are continuous d.f.’s and F is additionally strictly increasing then

Proof. For the first identity observe that

On the other hand, if x(i),i=1,…,n, denote the ordered sample associated to x1,…,xn (the same set of values but ordered in nondecreasing sense) and

Taking into account that h(Fn) and F0(F−1n) are piecewise constant while F0 and h are non decreasing and continuous, we obtain

and the other identity follows from Proposition 2.1, part (b).  □

Our final result in this section provides a simple representation of minh∈Cα∥h−F0∘F−1∥ (hence, of dK(F0,Rα(F))). In this statement we assume that Γ is a nondecreasing function taking values in [0,1] (which is always the case if Γ=F0∘F−1). Note that taking right and left limits at 0 and 1, respectively, we can assume that F0∘F−1 is a nondecreasing (and left continuous) function from [0,1] to [0,1].

The proof of this result will be developed in Section 3. In fact Theorem 3.3 is just a rephrasing of this result. A look at that Theorem shows that hα=~hα+⋅1−α is an element of Cα such that ∥hα−Γ∥=minh∈Cα∥h−Γ∥, that is, hα is an optimal trimming function in the sense described above. We recall that we do not claim uniqueness of this minimizer, but this particular choice allows to compute dK(F0,Rα(Fn)) for sample d.f.’s. Moreover, Theorem 2.5 even provides a simple way for the computation of dK(F0,Rα(F)) for theoretical distributions. Let us see an illustration of this use.

To avoid cumbersome computations we focus on the cases σ=1, μ≠0 and μ=0, σ≠1.

In this section we refresh the notation. The role of 1/(1−α) will be played now by a generic Lipschitz constant L; our Γ will be substituted by a bounded function f:ℵ→R, where (ℵ,d) is (at least at the beginning) a general metric space, while we maintain [0,1] as the range of values. We will also use the notation x∨y (resp. x∧y) for the maximum (resp. minimum) of both numbers (or functions). Regarding the Lipschitz norm, recall the trivial inequalities

The first lemma collects some basic properties on the role of the Pasch-Hausdorff envelopes of a function to obtain a Lipschitz-continuous best L∞-approximation with constrained Lipschitz constant. For the sake of completeness, we will also include a simple proof.

Proof. Part (i) follows directly from the definitions of fL,1 and fL,2, because, for every x∈ℵ:

To address part (ii) observe that, for arbitrary x1,x2,y∈ℵ, the triangle inequality for the distance implies |Ld(x1,y)−Ld(x2,y)|≤Ld(x1,x2), leading to the inequalities

When ℵ is a real interval and f is non-decreasing, the functions fL,1 and fL,2 in Lemma 3.1 share also that property and can be alternatively expressed in terms of the the Ubhaya’s monotone envelopes of the function f(x)−Lx. This is the content of the following lemma.

where γL,j,j=1,2 are the non-increasing functions

Proof. The representations of fL,1 and fL,2 in terms of γL,1 and γL,2 follow from the fact that for arbitrary x,y∈ℵ,

where the inequalities follow from f being non-decreasing. Note that both functions γL,1 and γL,2 are non-increasing, but adding the term Lx to them leads to non-decreasing functions: For x1,x2∈ℵ with x1<x2, isotonicity of f implies that

Finally, let us include in the problem the boundary restrictions.