It is well known that the composition of a D-finite function with an algebraic function is again D-finite. We give the first estimates for the orders and the degrees of annihilating operators for the compositions. We find that the analysis of removable singularities leads to an order-degree curve which is much more accurate than the order-degree curve obtained from the usual linear algebra reasoning. 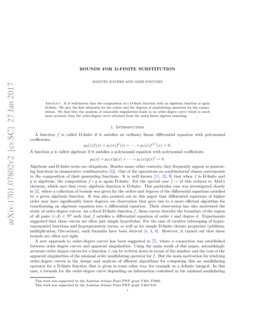 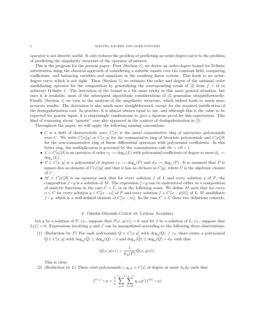 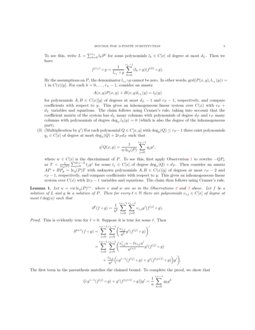 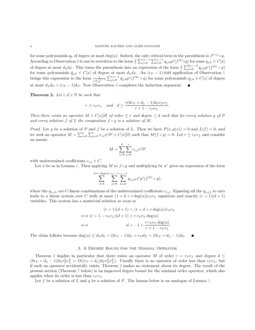 We explicitly determine the binary representation of the inverse of all ...
Lukas Kölsch, et al. ∙

A clone of functions on a finite domain determines and is determined by ...
Matthew Moore, et al. ∙

The need to compute the intersections between a line and a high-order cu...
Xiao Xiao, et al. ∙

Continuing a series of articles in the past few years on creative telesc...
Shaoshi Chen, et al. ∙

A function f is called D-finite if it satisfies an ordinary linear differential equation with polynomial coefficients,

A function g is called algebraic if it satisfies a polynomial equation with polynomial coefficients,

It is well known [9] that when f is D-finite and g is algebraic, the composition f∘g is again D-finite. For the special case f=id this reduces to Abel’s theorem, which says that every algebraic function is D-finite. This particular case was investigated closely in [2], where a collection of bounds was given for the orders and degrees of the differential equations satisfied by a given algebraic function. It was also pointed out in [2] that differential equations of higher order may have significantly lower degrees, an observation that gave rise to a more efficient algorithm for transforming an algebraic equation into a differential equation. Their observation has also motivated the study of order-degree curves: for a fixed D-finite function f, these curves describe the boundary of the region of all pairs (r,d)∈N2 such that f satisfies a differential equation of order r and degree d.

polynomial P∈C[x][y] of y-degree rP=3 and x-degree dP=4. For some prescribed orders r, we computed the smallest degrees d such that there is an operator M of order r and degree d that annihilates f∘g for all solutions f of L and all solutions g of P. The points (r,d) are shown in the figure on the right.

Experiments suggested that order-degree curves are often just simple hyperbolas. A priori knowledge of these hyperbolas can be used to design efficient algorithms. For the case of creative telescoping of hyperexponential functions and hypergeometric terms, as well as for simple D-finite closure properties (addition, multiplication, Ore-action), bounds for order-degree curves have been derived [4, 3, 8]. However, it turned out that these bounds are often not tight.

A new approach to order-degree curves has been suggested in [7], where a connection was established between order-degree curves and apparent singularities. Using the main result of this paper, very accurate order-degree curves for a function f can be written down in terms of the number and the cost of the apparent singularities of the minimal order annihilating operator for f. However, when the task is to compute an annihilating operator from some other representation, e.g., a definite integral, then the information about the apparent singularities of the minimal order operator is only a posteriori knowledge. Therefore, in order to design efficient algorithms using the result of [7], we need to predict the singularity structure of the output operator in terms of the input data. This is the program for the present paper.

First (Section 2), we derive an order-degree bound for D-finite substitution using the classical approach of considering a suitable ansatz over the constant field, comparing coefficients, and balancing variables and equations in the resulting linear system. This leads to an order-degree curve which is not tight. Then (Section 3) we estimate the order and degree of the minimal order annihilating operator for the composition by generalizing the corresponding result of [2] from f=id to arbitrary D-finite f. The derivation of the bound is a bit more tricky in this more general situation, but once it is available, most of the subsequent algorithmic considerations of [2] generalize straightforwardly. Finally (Section 4) we turn to the analysis of the singularity structure, which indeed leads to much more accurate results. The derivation is also much more straightforward, except for the required justification of the desingularization cost. In practice, it is almost always equal to one, and although this is the value to be expected for generic input, it is surprisingly cumbersome to give a rigorous proof for this expectation.

Throughout the paper, we use the following conventions:

Let u=vwlcy(P)rP, where v and w are as in the Observations 2 and 3 above. Let f be a solution of L and g be a solution of P. Then for every ℓ∈N there are polynomials ei,j∈C[x] of degree at most ℓdeg(u) such that

This is evidently true for ℓ=0. Suppose it is true for some ℓ. Then

The first term in the summand expression already matches the claimed bound. To complete the proof, we show that

Let r,d∈N be such that

Let u be as in Lemma 2. Then applying M to f∘g and multiplying by ur gives an expression of the form

where the qi,j,k are C-linear combinations of the undetermined coefficients ci,j. Equating all the qi,j,k to zero leads to a linear system over C with at most (1+d+rdeg(u))rLrP equations and exactly (r+1)(d+1) variables. This system has a nontrivial solution as soon as

3 A Degree Bound for the Minimal Operator

According to Theorem 3, there is operator M of order r=rLrP and degree d=O((rP+dL)dPr2Lr2P). Usually there is no operator of order less than rLrP, but if such an operator accidentally exists, Theorem 3 makes no statement about its degree. The result of the present section (Theorem 8 below) is a degree bound for the minimal order operator, which also applies when its order is less than rLrP, and which is better than the bound of Theorem 3 if the minimal order operator has order rLrP.

The following Lemma is a variant of Lemma 2 in which g is allowed to appear in the denominator, and with exponents larger than rP−1. This allows us to keep the x-degrees smaller.

We consider the summands separately. In ℓ(Ux+g′Uy)Uℓ+1, Ux is already a polynomial in x and g of bidegree at most (2dp−1,2rP+dL−1). Since g′=−Px(x,g)Py(x,g) and Uy is divisible by Py, g′Uy is also a polynomial with the same bound for the bidegree.

Futhermore, we can write

where the expression in the parenthesis satisfies the stated bound.

For j+1<rL, the last summand can be written as

Let f1,…,frL be C-linearly independent solutions of L, and let g1,…,grP be distinct solutions of P. By r we denote the C-dimension of the C-linear space V spanned by fi∘gj for all 1≤i≤rL and 1≤j≤rP. The order of the operator annihilating V is at least r. We will construct an operator of order r annihilating V using Wronskian-type matrices.

if and only if the vector

By Wi we denote the (r+1)×rL Wronskian matrix for f1∘gi,…,frL∘gi. Then f∈V if and only if the vector (f,…,f(r))T lies in the column space of the matrix (W1⋯WrP). Hence, it is sufficient to prove that Wi and A(x,gi) have the same column space. The following matrix equality follows from the definition of Ei,j

The latter matrix is nondegenerate since it is a Wronskian matrix for the C-linearly independent power series f1∘gi, …, frL∘gi with respect to the derivation (g′i)−1∂. Hence, Wi and A(x,gi) have the same column space.

In order to express the above condition of lying in the column space in terms of vanishing of a single determinant, we want to “square” the matrix (A(x,g1),⋯,A(x,grP)).

Let D be the Vandermonde matrix for g1,…,grP, and let IrL

denote the identity matrix. Then

C0=D⊗IrL is nondegenerate and has the form (B0(g1),…,B0(grP)), for some B0(y)∈C[y]rLrP×rL with entries of degree at most rP−1. Since C0 is nondegenerate, we can choose rLrP−r rows which span a complimentary subspace to the row space of (A(x,g1),…,A(x,grP)). Discarding all other rows from B0(y), we obtain B(y) with the desired properties.

We show that detCℓ is divisible by (gi−gj)rL for every i≠j. Without loss of generality, it is sufficient to show this for i=1 and j=2. We have

Since for every polynomial p(y) we have g1−g2∣p(g1)−p(g2), every entry of the first rL columns in the above matrix is divisible by g1−g2. Hence, the whole determinant is divisible by (g1−g2)rL.

The minimal operator M∈C[x][∂] annihilating f∘g for every f and g such that L(f)=0 and P(x,g(x))=0 has order r≤rLrP and degree at most

Since cℓ is symmetric with respect to g1,…,grP, it can be written as an element of C[x,s1,…,srP] where sj is the j-th elementary symmetric polynomial in g1,…,grP, and the total degree of cℓ with respect to sj’s does not exceed dY. Substituting sj with the corresponding coefficient of 1lcyPP(x,y) and clearing denominators, we obtain a polynomial in x of degree at most dX+dYdP.

Since the order of M is equal to the dimension of the space of all compositions of the form f∘g, where L(f)=0 and P(x,g)=0, M is the minimal annihilating operator for this space.

. By interpolating the degrees of the operators we found in our computations, we obtain the expression in the following conjecture.

For every rP,rL,dP,dL≥2 there exist L and P such that the corresponding minimal order operator M has order rLrP and degree

and there do not exist L and P for which the corresponding minimal operator M has order rLrP and larger degree.

A singularity of the minimal operator M is a root of its leading coefficient polynomial lc∂(M)∈C[x]. In the notation and terminology of [7], a factor p of this polynomial is called removable at cost n if there exists an operator Q∈C(x)[∂] of order deg∂(Q)≤n such that QM∈C[x][∂] and gcd(lc∂(QM),p)=1. A factor p is called removable if it is removable at some finite cost n∈N, and non-removable otherwise. The following theorem [7, Theorem 9] translates information about the removable singularities of a minimal operator into an order-degree curve.

The order-degree curve of Theorem 11 is much more accurate than that of Theorem 3. However, the theorem depends on quantities that are not easily observable when only L and P are known. From Theorem 8 (or Conj. 10), we have a good bound for degx(M). In the the rest of the paper, we discuss bounds and plausible hypotheses for the degree and the cost of the removable factors. The following example shows how knowledge about the degree of the operator and the degree and cost of its removable singularities influence the curve.

The figure below compares the data of Example 1 with the curve obtained from Theorem 11 using m=1, degx(Mmin)=544, degx(p1)=456, c1=1. This curve is labeled (a) below. Only for a few orders r, the curve slightly overshoots. In contrast, the curve of Theorem 3, labeled (b) below, overshoots significantly and systematically.

The figure also illustrates how the parameters affect the accuracy of the estimate. The value degx(Mmin)=544 is correctly predicted by Conjecture 10. If we use the more conservative estimate degx(Mmin)=1568 of Theorem 8, we get the curve (e). For curve (d) we have assumed a removability degree of degx(p1)=408, as predicted by Theorem 17 below, instead of the true value degx(p1)=456. For (c) we have assumed a removability cost c1=10 instead of c1=1.

Let P(x,y)∈C[x,y] be a polynomial with degyP=d, and R(x)=Resy(P,Py). Assume that α∈¯C is a root of R(x) of multiplicity k. Then the squarefree part