A dominant approach to solving large imperfect-information games is Counterfactural Regret Minimization (CFR). In CFR, many regret minimization problems are combined to solve the game. For very large games, abstraction is typically needed to render CFR tractable. Abstractions are often manually tuned, possibly removing important strategic differences in the full game and harming performance. Function approximation provides a natural solution to finding good abstractions to approximate the full game. A common approach to incorporating function approximation is to learn the inputs needed for a regret minimizing algorithm, allowing for generalization across many regret minimization problems. This paper gives regret bounds when a regret minimizing algorithm uses estimates instead of true values. This form of analysis is the first to generalize to a larger class of (Φ, f)-regret matching algorithms, and includes different forms of regret such as swap, internal, and external regret. We demonstrate how these results give a slightly tighter bound for Regression Regret-Matching (RRM), and present a novel bound for combining regression with Hedge. 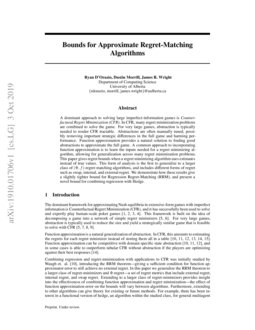 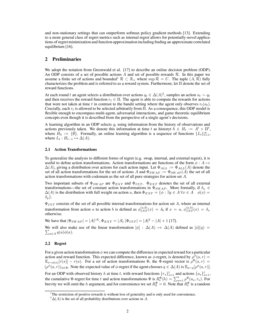 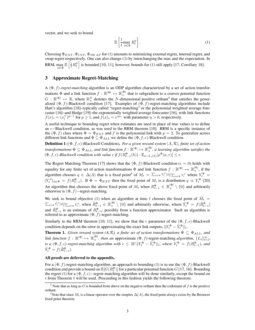 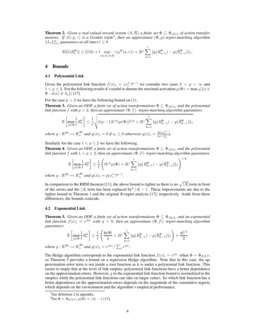 Regret has been established as a foundational concept in online learning...
Georgios Piliouras, et al. ∙

The regret matching algorithm proposed by Sergiu Hart is one of the most...
Dawen Wu, et al. ∙

Scaling up Psychology via Scientific Regret Minimization: A Case Study in Moral Decision-Making

The dominant framework for approximating Nash equilibria in extensive-form games with imperfect information is Counterfactual Regret Minimization (CFR), and it has successfully been used to solve and expertly play human-scale poker games [1, 2, 3, 4]. This framework is built on the idea of decomposing a game into a network of simple regret minimizers [5, 6]. For very large games, abstraction is typically used to reduce the size and yield a strategically similar game that is feasible to solve with CFR [5, 7, 8, 9].

Combining regression and regret-minimization with applications to CFR was initially studied by Waugh et. al. [10], introducing the RRM theorem—giving a sufficient condition for function approximator error to still achieve no external regret. In this paper we generalize the RRM theorem to a larger class of regret-minimizers and Φ-regret—a set of regret metrics that include external regret, internal regret, and swap regret. Extending to a larger class of regret-minimizers provides insight into the effectiveness of combining function approximation and regret minimization—the effect of function approximation error on the bounds will vary between algorithms. Furthermore, extending to other algorithms can give theory for existing or future methods. For example, there has been interest in a functional version of hedge, an algorithm within the studied class, for general multiagent and non-stationary settings that can outperform softmax policy gradient methods [13]. Extending to a more general class of regret metrics such as internal regret allows for potentially-novel applications of regret minimization and function approximation including finding an approximate correlated equilibrium [16].

We adopt the notation from Greenwald et al. [17] to describe an online decision problem (ODP). An ODP consists of a set of possible actions A and set of possible rewards R. In this paper we assume a finite set of actions and bounded111The restriction of positive rewards is without loss of generality and is only used for convenience. R⊂R+ where supR=U. The tuple (A,R) fully characterizes the problem and is referred to as a reward system. Furthermore, let Π denote the set of reward functions.

At each round t an agent selects a distribution over actions qt∈Δ(A)\lx@notefootnote$Δ(A)$isthesetofallprobabilitydistributionsoveractionsin$A$., samples an action at∼qt and then receives the reward function rt∈Π. The agent is able to compute the rewards for actions that were not taken at time t in contrast to the bandit setting where the agent only observes rt(at). Crucially, each rt is allowed to be selected arbitrarily from Π. As a consequence, this ODP model is flexible enough to encompass multi-agent, adversarial interactions, and game theoretic equilibrium concepts even though it is described from the perspective of a single agent’s decisions.

We will also make use of the linear transformation

For an ODP with observed history h at time t, with reward functions {rs}ts=1 and actions {as}ts=1, the cumulative Φ-regret for time t and action transformations Φ is RΦt(h)=∑ts=1ρΦ(as,rs). For brevity we will omit the h argument, and for convenience we set RΦ0=0. Note that RΦt is a random vector, and we seek to bound

Choosing ΦEXT,ΦINT,ΦSWAP for (1) amounts to minimizing external regret, internal regret, and swap regret respectively. One can also change (1) by interchanging the max and the expectation. In RRM, max ϕ∈ΦE[1tRϕt] is bounded [10, 11], however, bounds for (1) still apply [17, Corollary 18].

A (Φ,f)-regret-matching algorithm is an ODP algorithm characterized by a set of action transformations Φ and a link function f:R|Φ|↦R|Φ|+ that is subgradient to a convex potential function G:R|Φ|↦R, where RN+ denotes the N-dimensional positive orthant333 Note that as long as G is bounded from above on the negative orthant then the codomain of f is the positive orthant. that satisfies the generalized (Φ,f)-Blackwell condition [17]. Examples of (Φ,f)-regret-matching algorithms include Hart’s algorithm [18]–typically called “regret-matching” or the polynomial weighted average forecaster [16]–and Hedge [19]–the exponentially weighted average forecaster [16], with link functions f(x)i=(x+i)p−1 for p≥1, and f(x)i=eηxi with parameter η>0, respectively.

A useful technique to bounding regret when estimates are used in place of true values is to define an ϵ−Blackwell condition, as was used in the RRM theorem [10]. RRM is a specific instance of the (Φ,f) class where Φ=ΦEXT and f is the polynomial link with p=2. To generalize across different link functions and Φ⊆ΦALL we define the (Φ,f,ϵ)-Blackwell condition.

For a given reward system (A,R), finite set of action transformations Φ⊆ΦALL, and link function f:R|Φ|↦R|Φ|+, a learning algorithm satisfies the (Φ,f,ϵ)-Blackwell condition with value ϵ if f(RΦt−1(h))⋅Ea∼Lt(h)[ρΦ(a,r)]≤ϵ.

The Regret Matching Theorem [17] shows that the (Φ,f)-Blackwell condition (ϵ=0) holds with equality for any finite set of action transformations Φ and link function f:R|Φ|↦R|Φ|+, if the algorithm chooses q∈Δ(A) that is a fixed point444Note that since Mt is a linear operator over the simplex Δ(A), the fixed point always exists by the Brouwer fixed point theorem. of Mt=\nicefrac∑ϕ∈ΦYϕt[ϕ]∑ϕ∈ΦYϕt where YΦt=(Yϕt)ϕ∈Φ=f(RΦt−1). If Φ=ΦEXT then the fixed point of Mt is a distribution q∝YΦt [20]. An algorithm that chooses the above fixed point of Mt when RΦt−1∈R|Φ|+∖{0} and arbitrarily otherwise is (Φ,f)−regret-matching.

We seek to bound objective (1) when an algorithm at time t chooses the fixed point of ~Mt=\nicefrac∑ϕ∈Φ~Yϕt[ϕ]∑ϕ∈Φ~Yϕt, when ~RΦt−1∈R|Φ|+∖{0} and arbitrarily otherwise, where ~YΦt=f(~RΦt−1) and ~RΦt−1 is an estimate of RΦt−1, possibly from a function approximator. Such an algorithm is referred to as approximate (Φ,f)-regret-matching.

Similarly to the RRM theorem [10, 11], we show that the ϵ parameter of the (Φ,f,ϵ)-Blackwell condition depends on the error in approximating the exact link outputs, ∥YΦt−~YΦt∥1.

All proofs are deferred to the appendix.

For a (Φ,f)-regret-matching algorithm, an approach to bounding (1) is to use the (Φ,f)-Blackwell condition and provide a bound on E[G(RΦt)] for a particular potential function G [17, 16]. Bounding the regret (1) for a (Φ,f,ϵ)−regret-matching algorithm will be done similarly, except the bound on ϵ from Theorem 1 will be used. Proceeding in this fashion yields the following theorem:

Given a real-valued reward system (A,R) a finite set Φ⊆ΦALL of action transformations. If ⟨G,g,γ⟩ is a Gordon triple555See definition 2 in appendix., then an approximate (Φ,g)-regret-matching algorithm {Lt}∞t=1 guarantees at all times t≥0

Given an ODP, a finite set of action transformations Φ⊆ΦALL, and the polynomial link function f with p>2, then an approximate (Φ,f)- regret-matching algorithm guarantees

Similarly for the case 1<p≤2 we have the following.

Given an ODP, a finite set of action transformations Φ⊆ΦALL, and the polynomial link function f with 1<p≤2, then an approximate (Φ,f)- regret-matching algorithm guarantees

In comparison to the RRM theorem [11], the above bound is tighter as there is no √|A| term in front of the errors and the |A| term has been replaced by666For Φ=ΦEXT,μ(Φ)=|A|−1 [17]. |A|−1. These improvements are due to the tighter bound in Theorem 1 and the original Φ-regret analysis [17], respectively. Aside from these differences, the bounds coincide.

Given an ODP, a finite set of action transformations Φ⊆ΦALL, and an exponential link function f(x)i=eηxi with η>0, then an approximate (Φ,f)- regret-matching algorithm guarantees

We acknowledge the support of the Natural Sciences and Engineering Research Council of Canada (NSERC), the Alberta Machine Intelligence Institute (Amii), and Alberta Treasury Branch (ATB).

Given a reward system (A,R) and a finite set of action transformations Φ⊆ΦALL, then ∥ρΦ(a,r)∥p≤U(μ(Φ))1/p for any reward function r∈Π.

It should be noted that the above theorem was originally proved by Gordon [21].

We denote r=(r′(a))a∈A as the reward vector for an arbitrary reward function r′:A↦R. Since by construction this algorithm chooses Lt at each timestep t to be the fixed point of ~Mt, all that remains to be shown is that this algorithm satisfies the (Φ,f,ϵ)-Blackwell condition with ϵ≤2U∥YΦt−~YΦt∥1,t>0.

By expanding the value of interest in the (Φ,f)-Blackwell condition and applying elementary upper bounds, we arrive at the desired bound. For simplicity, we omit timestep indices and set L:=Lt(h). First, suppose ∑ϕ∈Φ~YΦt≠0:

If ∑ϕ∈Φ~YΦ=0 it is easy to see the inequality still holds.

An important observation of Theorem 1 is the following corollary:

For a reward system (A,R), finite set of action transformations Φ⊆ΦALL, and two link functions f and f′, if there exists a strictly positive function ψ:R|Φ|↦R such that f′(x)=ψ(x)f(x) then for any ϵ∈R, then an approximate (Φ,f)-regret-matching algorithm satisfies

The reasoning is similar to [Lemma 20][17]. The played fixed point is the same under both link functions, thus following the same steps to Theorem 1 provides the above bound. ∎

The first inequality is from Lemma 1. The second inequality follows from Corollary 1 and theorem 2. The third inequality is an application of Lemma 2. The result then immediately follows. ∎

The first inequality is from Lemma 1. The second inequality follows from Corollary 1 and theorem 2. The third inequality is an application of Lemma 2. The result then immediately follows. ∎

The second inequality follows from Corollary 1 and theorem 2. The result then immediately follows. ∎