Bounding the Number of Minimal Transversals in Tripartite 3-Uniform Hypergraphs

We bound the number of minimal hypergraph transversals that arise in tri-partite 3-uniform hypergraphs, a class commonly found in applications dealing with data. Let H be such a hypergraph on a set of vertices V. We give a lower bound of 1.4977 |V | and an upper bound of 1.5012 |V | . 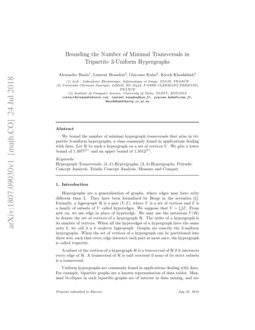 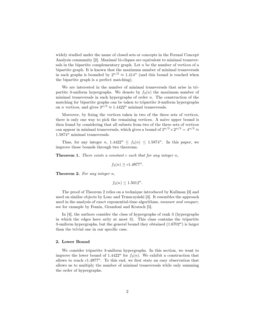 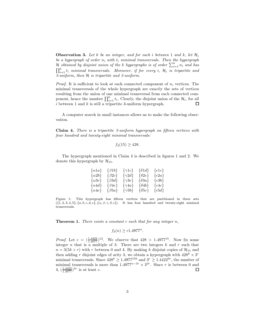 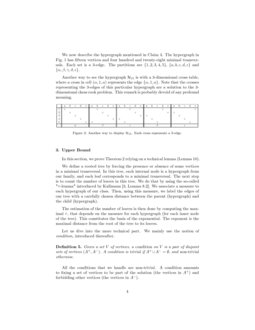 A generalization of the Kővári-Sós-Turán theorem

This work is part of the field of the hypergraph theory and focuses on h...
M. Nidhal Jelassi, et al. ∙

Bounding the trace function of a hypergraph with applications

An upper bound on the trace function of a hypergraph H is derived and it...
Farhad Shahrokhi, et al. ∙

We generalize the fact that graphs with small VC-dimension can be approx...
Artem Chernikov, et al. ∙

Uniform hypergraphs are commonly found in applications dealing with data. For example, bipartite graphs are a known representation of data tables. Maximal bi-cliques in such bipartite graphs are of interest in data mining, and are widely studied under the name of closed sets or concepts in the Formal Concept Analysis community ganter2012formal . Maximal bi-cliques are equivalent to minimal transversals in the bipartite complementary graph. Let n be the number of vertices of a bipartite graph. It is known that the maximum number of minimal transversals in such graphs is bounded by 2n/2≈1.414n (and this bound is reached when the bipartite graph is a perfect matching).

There exists a constant c such that for any integer n,

For any integer n,

The proof of Theorem 2 relies on a technique introduced by Kullman DBLP:journals/tcs/Kullmann99 and used on similar objects by Lonc and Truszczyński DBLP:journals/dm/LoncT08 . It resembles the approach used in the analysis of exact exponential-time algorithms, measure and conquer, see for example by Fomin, Grandoni and Kratsch DBLP:journals/jacm/FominGK09 .

In DBLP:journals/dm/LoncT08 , the authors consider the class of hypergraphs of rank 3 (hypergraphs in which the edges have arity at most 3). This class contains the tripartite 3-uniform hypergraphs, but the general bound they obtained (1.6702n) is larger than the trivial one in our specific case.

We consider tripartite 3-uniform hypergraphs. In this section, we want to improve the lower bound of 1.4422n for f3(n). We exhibit a construction that allows to reach c1.4977n. To this end, we first state an easy observation that allows us to multiply the number of minimal transversals while only summing the order of hypergraphs.

It is sufficient to look at each connected component of ni vertices. The minimal transversals of the whole hypergraph are exactly the sets of vertices resulting from the union of one minimal transversal from each connected component, hence the number ∏ki=1ti. Clearly, the disjoint union of the Hi, for all i between 1 and k is still a tripartite 3-uniform hypergraph. ∎

A computer search in small instances allows us to make the following observation.

There is a tripartite 3-uniform hypergraph on fifteen vertices with four hundred and twenty-eight minimal transversals:

The hypergraph mentioned in Claim 4 is described in figures 1 and 2. We denote this hypergraph by H15.

There exists a constant c such that for any integer n,

We now describe the hypergraph mentioned in Claim 4. The hypergraph in Fig. 1 has fifteen vertices and four hundred and twenty-eight minimal transversals. Each set is a 3-edge. The partitions are {1,2,3,4,5}, {a,b,c,d,e} and {α,β,γ,δ,ϵ}.

Another way to see the hypergraph H15 is with a 3-dimensional cross table, where a cross in cell (α,1,a) represents the edge {α,1,a}

. Note that the crosses representing the 3-edges of this particular hypergraph are a solution to the 3-dimensional chess rook problem. This remark is probably devoid of any profound meaning.

In this section, we prove Theorem 2 relying on a technical lemma (Lemma 10).

We define a rooted tree by forcing the presence or absence of some vertices in a minimal transversal. In this tree, each internal node is a hypergraph from our family, and each leaf corresponds to a minimal transversal. The next step is to count the number of leaves in this tree. We do that by using the so-called "τ-lemma" introduced by Kullmann (DBLP:journals/tcs/Kullmann99, , Lemma 8.2). We associate a measure to each hypergraph of our class. Then, using this measure, we label the edges of our tree with a carefully chosen distance between the parent (hypergraph) and the child (hypergraph).

τ, that depends on the measure for each hypergraph (for each inner node of the tree). This constitutes the basis of the exponential. The exponent is the maximal distance from the root of the tree to its leaves.

Let us dive into the more technical part. We mainly use the notion of condition, introduced thereafter.

Given a set V of vertices, a condition on V is a pair of disjoint sets of vertices (A+,A−). A condition is trivial if A+∪A−=∅, and non-trivial otherwise.

Vertices of H that appear in a condition (A+,A−) are not in V(H(A+,A−)) as they are either removed from all the edges or all the edges that contained them have disappeared.

The proof is straightforward from the construction of H(A+,A−). ∎

This echoes the parent-child relation that can be found in the exact exponential-time algorithm field fomin2010exact .

Let C be the class of tripartite hypergraphs in which edges have arity at most 3 and one of the parts is a minimal transversal. We call S the part that is a minimal transversal. Tripartite 3-uniform hypergraphs belong to this class. Tripartite hypergraphs remain tripartite when vertices are removed from edges or edges are deleted. Of course, those operations do not increase the arity of edges. As such, if an hypergraph H=(V,E) belongs to the class C and A=(A+,A−) is a condition on V such that the edges that contain vertices of A−∩S also contain vertices of A+, then HA is in C. From now on, we suppose that all the conditions we discuss respect this property.

We define a rooted labeled tree TH for all hypergraphs H in C. If H=∅, then we define TH to be a single node labeled with H. When H is non-trivial, we create a node labeled H and make it the parent of all trees THA for all A∈ρ(H). Since C is closed under the operation of removing edges and removing vertices from edges and since the number of vertices can only decrease when the transformation from H to HA occurs, the inductive definition is valid.

Let ρ be a descendant function for a class closed by removing edges and removing vertices from edges. Then for all hypergraphs H in such a class, the number of minimal transversals is bounded above by the number of leaves of TH.

When H=∅, then it has only one transversal, the empty set. If the empty set is an edge of H, then H has no transversals. In both cases, the assertion follows directly from the definition of the tree. Let us assume now that H is non-trivial, and that the assertion is true for all hypergraphs with fewer vertices than H.

We now want to bound the number of leaves in TH for all hypergraphs in C. To that end, we shall use Lemma 8 proved by Kullmann DBLP:journals/tcs/Kullmann99 .

Consider rooted a tree T with an edge labeling w with value in the interval [0,1] such that for every internal node, the sum of the labels on the edges from that node to its children is 1 (that is a transition probability).

In order to pick an adequate probability distribution, we use a measure. A

measure is a function that assigns to any hypergraph H in C a real number μ(H) such that 0≤μ(H)≤|V(H)|. Let H be such a hypergraph, A a condition on its vertices and μ a measure. We define

Let H be a hypergraph in C and μ a measure. If, for every condition A in ρ(H), μ(HA)≤μ(H), that we say then ρ is μ-compatible. In this case, there is a unique positive real number τ≥1 such that

A descendant function defined on a class C is μ-bounded by τ0 if, for every non-trivial hypergraph H in C, τH≤τ0.

Now, we adapt the τ-lemma proven by Kullmann DBLP:journals/tcs/Kullmann99 to our formalism.

Let μ be a measure and ρ a descendant function, both defined on a class C of hypergraphs closed under the operation of removing edges and removing vertices from edges. If ρ is μ-compatible and μ-bounded by τ0, then for every hypergraph H in C,

where h(TH) is the height of TH.

This theorem comes from Lemma 8. We find the worst possible branching and assume that we apply it on every node on the path from the root to the leaves.

There is a measure μ defined for every hypergraph H in C and a descendant function ρ for C that is μ compatible and μ-bounded by 1.8393.

The general idea of this proof is that we give a complete family of conditions for every non-trivial hypergraph in C.

Let H be a hypergraph belonging to the class C, i.e. a tripartite hypergraph that contains a set S of vertices that is a minimal transversal such that no two vertices of S belong to a same edge.

We use Theorem 9 to bound the number of leaves in the tree TH and thus the number of minimal transversals in H. To do so, we define a descendant function ρ that assigns a family of conditions to H depending on its structure. This takes the form of a case analysis.

In each case, we consider a vertex a from S and its surroundings. The conditions involve vertices from these surroundings and are sometimes strengthened to contain a if and only if its presence in A+ or A− is implied by our hypotheses. This causes every condition A to respect the property that A+ intersects all the edges containing a vertex of A−∩S, which lets HA remain in the class C.

We set the measure μ(H) to

where m(H) is the maximum number of pairwise disjoint 2-element edges in H and α=0.145785. The same measure is used in DBLP:journals/dm/LoncT08 (with a different α).

In each case i and for every condition A, we find a bound kH,A such that

and a unique positive real number τi that satisfies the equation

As all our conditions involve at least one element from V(H)∖S, the height of TH is bounded by |V(H)|−|S|. Hence, we have

Let M be a maximum set of pairwise distinct 2-edges (matching) of H. By removing k vertices we decrease the size of a maximum matching by at most k. Thus we have

Since a is in a unique 2-edge, when one removes a and b, the size of a maximum matching decreases at most by 1.

This proof ensures that there is a measure μ and a descendant function ρ for our class of hypergraphs such that ρ is μ-bounded by 1.8393. This allows us to formulate the following theorem.

The number of minimal transversals in an hypergraph belonging to the class C is less than 1.8393n−|S|.

Let μ and ρ be the measure and descendant function mentioned in Lemma 10. The height h(TH) of the tree is bounded by n−|S| so a straightforward application of Theorem 9 yields the result. ∎

Theorem 2 is a straightforward corollary of Theorem 11.

For any integer n,

The vertices of a tripartite 3-uniform hypergraph can be partitioned into three minimal transversals so any of them can be S. The minimization of the bound is achieved by using the biggest set which, in the worst case, has size n/3. ∎

We now state a few problems that we find of interest.

Find a nice111In a purely subjective way. extremal family (in the same feeling of perfect matchings) that is better than 3n/3.

Tighten the bound through a better choice of measure or branching.