Bounding the number of edges of matchstick graphs 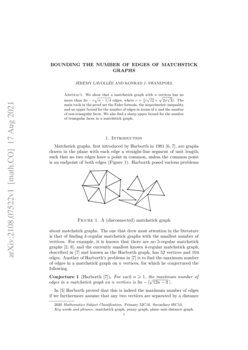 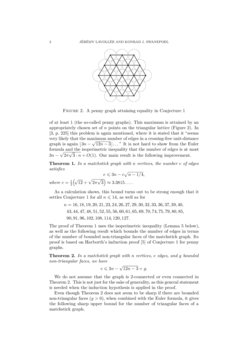 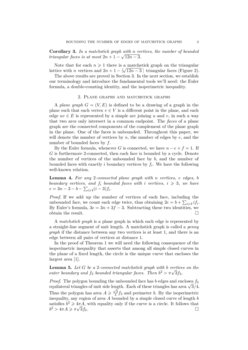 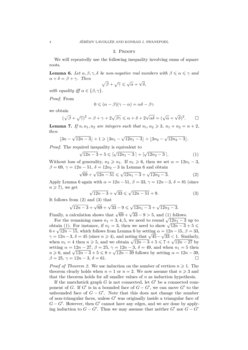 A tight bound for the number of edges of matchstick graphs

Signified chromatic number of grids is at most 9

In this paper we rederive an old upper bound on the number of halving ed...
Pintu Chauhan, et al. ∙

Random Embeddings of Graphs: The Expected Number of Faces in Most Graphs is Logarithmic

A lower bound on the saturation number, and graphs for which it is sharp

Let H be a fixed graph. We say that a graph G is H-saturated if it has n...
Alex Cameron, et al. ∙

We study the problem of guarding an orthogonal polyhedron having reflex ...
Giovanni Viglietta, et al. ∙

Matchstick graphs, first introduced by Harborth in 1981 [6, 7], are graphs drawn in the plane with each edge a straight-line segment of unit length, such that no two edges have a point in common, unless the common point is an endpoint of both edges (Figure 1).

For each n⩾1, the maximum number of edges in a matchstick graph on n vertices is 3n−⌈√12n−3⌉.

In [5] Harborth proved that this is indeed the maximum number of edges if we furthermore assume that any two vertices are separated by a distance of at least 1 (the so-called penny graphs). This maximum is attained by an appropriately chosen set of n points on the triangular lattice (Figure 2).

In [3, p. 225] this problem is again mentioned, where it is stated that it “seems very likely that the maximum number of edges in a crossing-free unit-distance graph is again ⌊3n−√12n−3⌋…” It is not hard to show from the Euler formula and the isoperimetric inequality that the number of edges is at most 3n−√2π√3⋅n+O(1). Our main result is the following improvement.

In a matchstick graph with n vertices, the number e of edges satisfies

As a calculation shows, this bound turns out to be strong enough that it settles Conjecture 1 for all n⩽14, as well as for

The proof of Theorem 1 uses the isoperimetric inequality (Lemma 5 below), as well as the following result which bounds the number of edges in terms of the number of bounded non-triangular faces of the matchstick graph. Its proof is based on Harborth’s induction proof [5] of Conjecture 1 for penny graphs.

In a matchstick graph with n vertices, e edges, and g bounded non-triangular faces, we have

We do not assume that the graph is 2-connected or even connected in Theorem 2. This is not just for the sake of generality, as this general statement is needed when the induction hypothesis is applied in the proof.

Even though Theorem 2 does not seem to be sharp if there are bounded non-triangular faces (g>0), when combined with the Euler formula, it gives the following sharp upper bound for the number of triangular faces of a matchstick graph.

In a matchstick graph with n vertices, the number of bounded triangular faces is at most 2n+1−√12n−3.

Note that for each n⩾1 there is a matchstick graph on the triangular lattice with n vertices and 2n+1−⌈√12n−3⌉ triangular faces (Figure 2).

The above results are proved in Section 3. In the next section, we establish our terminology and introduce the fundamental tools we’ll need: the Euler formula, a double-counting identity, and the isoperimetric inequality.

By the Euler formula, whenever G is connected, we have n−e+f=1. If G is furthermore 2-connected, then each face is bounded by a cycle. Denote the number of vertices of the unbounded face by b, and the number of bounded faces with exactly i boundary vertices by fi. We have the following well-known relation.

For any 2-connected plane graph with n vertices, e edges, b boundary vertices, and fi bounded faces with i vertices, i⩾3, we have e=3n−3−b−∑i⩾4(i−3)fi.

If we add up the number of vertices of each face, including the unbounded face, we count each edge twice, thus obtaining 2e=b+∑i⩾3ifi. By Euler’s formula, 3e=3n+3f−3. Subtracting these two identities, we obtain the result. ∎

In the proof of Theorem 1 we will need the following consequence of the isoperimetric inequality that asserts that among all simple closed curves in the plane of a fixed length, the circle is the unique curve that encloses the largest area [1].

Let G be a 2-connected matchstick graph with b vertices on the outer boundary and f3 bounded triangular faces. Then b2>π√3f3.

The polygon bounding the unbounded face has b edges and encloses f3 equilateral triangles of unit side length. Each of these triangles has area √3/4. Thus the polygon has area A⩾√34f3 and perimeter b. By the isoperimetric inequality, any region of area A bounded by a simple closed curve of length b satisfies b2⩾4πA, with equality only if the curve is a circle. It follows that b2>4πA⩾π√3f3. ∎

We will repeatedly use the following inequality involving sums of square roots.

The required inequality is equivalent to

We use induction on the number of vertices n⩾1. The theorem clearly holds when n=1 or n=2. We now assume that n⩾3 and that the theorem holds for all smaller values of n as induction hypothesis.

If the matchstick graph G is not connected, let G′ be a connected component of G. If G′ is in a bounded face of G−G′, we can move G′ to the unbounded face of G−G′. Note that this does not change the number of non-triangular faces, unless G′ was originally inside a triangular face of G−G′. However, then G′ cannot have any edges, and we are done by applying induction to G−G′. Thus we may assume that neither G′ nor G−G′ lies in a bounded face of the other graph. Then it is easy to move G′ so that one of its vertices is at distance 1 from a vertex of G−G′, while keeping G′ and G−G′ disjoint. This creates a new edge that joins two connected components of G. This process can be repeated until G is connected, without decreasing the number of edges.

We now assume without loss of generality that G is connected. If G is not 2-connected, then there is a vertex v such that G−v is disconnected (Figure 3(a)). We can then decompose G into two induced subgraphs G1 and G2 having only v in common. If Gi has ni vertices, ei edges, and gi non-triangular faces (i=1,2), then n1,n2⩾2, n1+n2=n+1, and e1+e2=e. It is clear that g1+g2=g if G1 lies in the unbounded face of G2 and G2 in the unbounded face of G1. Suppose that G1 (say) lies in a bounded face of G2. Then this face cannot be a triangle, as then G1 would not have any edges, contradicting the connectedness of G. It follows that g1+g2=g in this case too. By induction,

For the remainder of the proof we assume without loss of generality that G is 2-connected. In particular, the boundary of the unbounded face is a cycle.

Suppose that the boundary cycle has a chord (Figure 3(b)). Let G1 and G2 be two induced subgraphs covering G such that the chord is their only common edge and the endpoints of the chord their only two common vertices. Using the same notation as before, with Gi having ni vertices, ei edges, and gi non-triangular faces (i=1,2), we now have n1,n2⩾3, n1+n2=n+2, e1+e2=e+1, and g1+g2=g. Again we use induction on these two subgraphs to obtain

From now on we assume without loss of generality that the boundary cycle does not have a chord.

We next show that if a bounded non-triangular face shares more than one vertex with the unbounded face, then we can assume without loss of generality that only two of its vertices are on the boundary cycle, they are adjacent, and at most one of the two interior angles of the face at these two vertices is smaller than 60∘.

First suppose that a non-triangular bounded face has two non-adjacent vertices on the boundary (Figure 3(c)). We decompose G into two induced subgraphs G1 and G2 such they only have these two vertices in common, with no common edge. Again using the notation with Gi having ni vertices, ei edges, and gi non-triangular faces (i=1,2), we have n1,n2⩾3, n1+n2=n+2, e1+e2=e, and g1+g2=g−1. By induction,

From now on we assume without loss of generality that whenever a non-triangular bounded face has more than one vertex on the boundary, it has only two vertices on the boundary and they are adjacent. If both angles at these boundary vertices are <60∘, then two of the edges of the face will be forced to intersect. It follows that at most one angle of a non-triangular face is less than 60∘.

Since the boundary cycle has no chord, when we remove the b vertices on the boundary together with their incident edges, we remove exactly ∑i⩾2(i−1)bi edges. We also remove gb non-triangular faces and b vertices. Without loss of generality, n−b>0, otherwise G is just the boundary cycle, hence e=n⩽3n−√12n−3+g since n⩾3. We use induction on the remaining graph of n−b vertices to obtain

In the last step of the above proof, there is some slack, as we actually have e⩽3n−b−3−g from Lemma 4. By taking this into account, it is possible to prove the slightly stronger inequality e⩽3n−√12(n+2g)−3+g. However, there are then more boundary cases to deal with, and as this is not much of an improvement, we settled for the weaker inequality in Theorem 2.

When we removed the outer boundary cycle in the above proof, we needed this cycle not to have a chord in order to count the number of edges that are removed. This point is overlooked in Harborth’s original proof [5] on which this proof is based.

Combining these two equations together gives

We now assume that G is 2-connected. Thus the unbounded face is bounded by a cycle with b edges. As before, denote the number of bounded faces with i vertices by fi (i⩾3), and the number of non-triangular faces by g. By Lemma 4, noting that g=∑i⩾4fi⩽∑i⩾4(i−3)fi, we have

Suppose for the sake of contradiction that

We obtain the following lower bound for f3 from (7), (8), and the Euler formula:

By completing the square,

we get the following lower bound for b:

Since the left-hand side is non-negative, we can assume without loss of generality that