In this paper,our main focus is to obtain an asymptotic bound on the family wise error rate (FWER) for Bonferroni-type procedure in the simultaneous hypotheses testing problem when the observations corresponding to individual hypothesis are correlated. In particular, we have considered the sequence of null hypotheses H_0i : X_i follows N(0,1) , (i=1,2,....,n) and equicorrelated structure of the sequence (X_1,....,X_n). Distribution free bound on FWER under equicorrelated setup can be found in Tong(2014). But the upper bound provided in Tong(2014) is not a bounded quantity as the no. of hypotheses(n) gets larger and larger and as a result,FWER is highly overestimated for the choice of a particular distribution (e.g.- normal). In the equicorrelated normal setup, we have shown that FWER asymptotically is a convex function (as a function of correlation (rho)) and hence an upper bound on the FWER of Bonferroni-(alpha) procedure is alpha(1-ρ).This implies,Bonferroni's method actually controls the FWER at a much smaller level than the desired level of significance under the positively correlated case and necessitates a correlation correction. 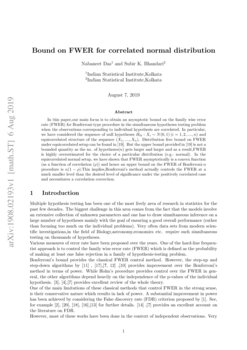 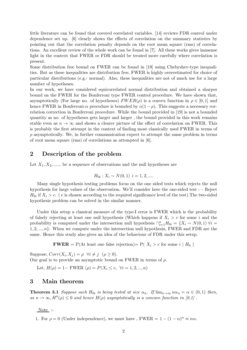 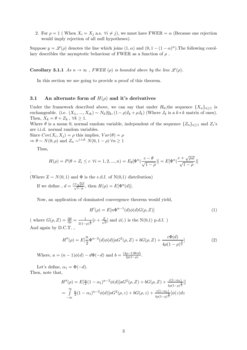 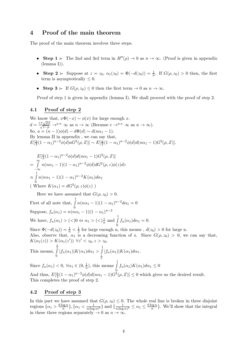 Multiple hypothesis testing has been one of the most lively area of research in statistics for the past few decades. The biggest challenge in this area comes from the fact that the models involve an extensive collection of unknown parameters and one has to draw simultaneous inference on a large number of hypotheses mainly with the goal of ensuring a good overall performance (rather than focusing too much on the individual problems). Very often data sets from modern scientific investigations,in the field of Biology,astronomy,economics etc. require such simultaneous testing on thousands of hypotheses.

Various measures of error rate have been proposed over the years. One of the hard-line frequentist approach is to control the family wise error rate (FWER) which is defined as the probability of making at least one false rejection in a family of hypothesis-testing problem.

Bonferroni’s bound provides the classical FWER control method. However, the step-up and step-down algorithms by [11] , [17],[12] ,[10] provides improvement over the Bonferroni’s method in terms of power. While Holm’s procedure provides control over the FWER in general, the other algorithms depend heavily on the independence of the p-values of the individual hypothesis. [3], [4],[7] provides excellent review of the whole theory. One of the main limitations of these classical methods that control FWER in the strong sense, is their conservative nature which results in lack of power. A substantial improvement in power has been achieved by considering the False discovery rate (FDR) criterion proposed by [1]. See, for example [2], [20], [18], [16],[13] for further details. [14] ,[7] provides an excellent account on the literature on FDR. However, most of these works have been done in the context of independent observations. Very little literature can be found that covered correlated variables. [14] reviews FDR control under dependence set up. [6] clearly shows the effects of correlation on the summary statistics by pointing out that the correlation penalty depends on the root mean square (rms) of correlations. An excellent review of the whole work can be found in [7]. All these works gives immense light in the context that FWER or FDR should be treated more carefully where correlation is present. Some distribution free bound on FWER can be found in [19] using Chebyshev-type inequalities. But as these inequalities are distribution free, FWER is highly overestimated for choice of particular distributions (e.g.- normal). Also, these inequalities are not of much use for a large number of hypotheses. In our work, we have considered equicorrelated normal distribution and obtained a sharper bound on the FWER for the Bonferroni type FWER control procedure. We have shown that, asymptotically (For large no. of hypotheses) FWER(ρ) is a convex function in ρ∈[0,1] and hence FWER in Bonferroni-α procedure is bounded by α(1−ρ). This suggests a necessary correlation correction in Bonferroni procedure. While the bound provided in [19] is not a bounded quantity as no. of hypotheses gets larger and larger , the bound provided in this work remains stable even as n→∞ and shows a clearer picture of the effect of correlation on FWER. This is probably the first attempt in the context of finding most classically used FWER in terms of ρ asymptotically. We, in further communication expect to attempt the same problem in terms of root mean square (rms) of correlations as attempted in [6].

2 Description of the problem

Let X1,X2,...... be a sequence of observations and the null hypotheses are

Many single hypothesis testing problems focus on the one sided tests which rejects the null hypothesis for large values of the observation. We’ll consider here the one-sided test : - Reject

H0i if Xi>c. ( c is chosen according to the required significance level of the test).The two-sided hypothesis problem can be solved in the similar manner.

Suppose, Corr(Xi,Xj)=ρ∀i≠j(ρ≥0). Our goal is to provide an asymptotic bound on FWER in terms of ρ.

Suppose y=L(ρ) denotes the line which joins (1,α) and (0,1−(1−α)n).The following corollary describles the asymptotic behaviour of FWER as a function of ρ .

In this section we are going to provide a proof of this theorem.

3.1 An alternate form of H(ρ) and it’s derivatives

is a mean 0, normal random variable, independent of the sequence

Now, an application of dominated convergence theorem would yield,

4 Proof of the main theorem

The proof of the main theorem involves three steps.

Proof of step 1 is given in appendix (lemma I). We shall proceed with the proof of step 2.

This completes the proof of main theorem.

Bonferroni’s method suggests us to take αn=αn if we want to maintain α- FWER level. This satisfies the criterion of the main theorem of section 2. When αn=αn, then αn(n−(n−1)ρ)∼α(1−ρ).

This implies, the FWER of the Bonferroni’s procedure is bounded by α(1−ρ).

A similar idea to the proof of lemma-I will tell us that, we need to consider the region corresponding to 1n(logn)3<α1<8lognn and the integral corresponding to this region →0 follows exactly in the similar way as lemma - I.

^FWER).In each replication, we have generated 10000

equicorrelated normal random variables each with mean 0 and variance 1.Bonferroni’s method suggests us to reject

-th quantile of N(0,1) distribution. In each replication we have to note whether or not any of the

10000 Zi’s exceeds that cut-off and then ^FWER is obtained accordingly from the 10000 replications. Each ^FWER obtained at the combination (ρ,α) is compared with α(1−ρ)(the upper bound mentioned in section 5).It is impressive that in all the cases ^FWER is substantially smaller than α(1−ρ) (except at (ρ,α)=(0.1,0.01) although the difference is not noteworthy).All these observations suggest that in positively correlated setup,Bonferroni’s method actually controls the FWER at a much smaller level than the desired level of significance which makes this method more conservative in this case.