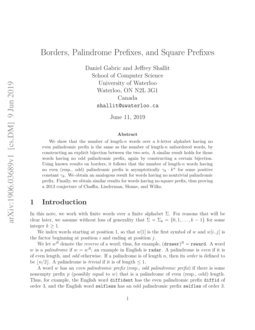 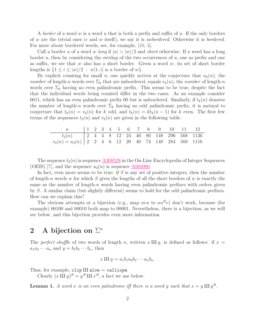 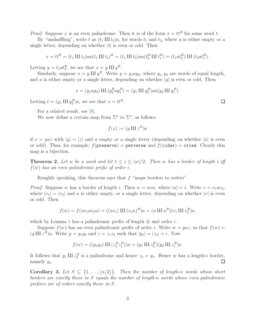 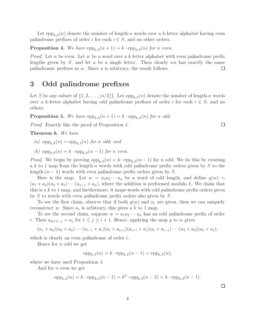 In this note, we work with finite words over a finite alphabet Σ. For reasons that will be clear later, we assume without loss of generality that Σ=Σk={0,1,…,k−1} for some integer k≥1.

A border of a word w is a word u that is both a prefix and suffix of u. If the only borders of w are the trivial ones (ϵ and w itself), we say it is unbordered. Otherwise it is bordered. For more about bordered words, see, for example, [10, 3].

Call a border u of a word w long if |u|>|w|/2 and short otherwise. If a word has a long border u, then by considering the overlap of the two occurrences of u, one as prefix and one as suffix, we see that w also has a short border. Given a word w, its set of short border lengths is {1≤i≤|w|/2 : w[1..i] is a border of w}.

In fact, even more seems to be true: if S is any set of positive integers, then the number of length-n words w for which S gives the lengths of all the short borders of w is exactly the same as the number of length-n words having even palindromic prefixes with orders given by S. A similar claim (but slightly different) seems to hold for the odd palindromic prefixes. How can we explain this?

The obvious attempts at a bijection (e.g., map uvu to uuRv) don’t work, because (for example) 00100 and 00010 both map to 00001. Nevertheless, there is a bijection, as we will see below, and this bijection provides even more information.

2 A bijection on Σn

The perfect shuffle of two words of length n, written x\shay, is defined as follows: if x=a1a2⋯an and y=b1b2⋯bn, then

Clearly (x\shay)R=yR\shaxR, a fact we use below.

A word x is an even palindrome iff there is a word y such that x=y\shayR.

Suppose x is an even palindrome. Then it is of the form x=ttR for some word t.

By “unshuffling”, write t as (t1\shat2)a, for words t1 and t2, where a is either empty or a single letter, depending on whether |t| is even or odd. Then

Similarly, suppose x=y\shayR. Write y=y1ay2, where y1,y2 are words of equal length, and a is either empty or a single letter, depending on whether |y| is even or odd. Then

We now define a certain map from Σn to Σn, as follows:

if x=yaz with |y|=|z| and a empty or a single letter (depending on whether |x| is even or odd). Thus, for example, f(preserve)=perverse and f(cider)=cried. Clearly this map is a bijection.

which by Lemma 1 has a palindromic prefix of length 2i and order i.

It follows that y1\shazR2 is a palindrome and hence z2=y1. Hence w has a length-i border, namely y1. ∎

Let eppk,S(n) denote the number of length-n words over a k-letter alphabet having even palindrome prefixes of order i for each i∈S, and no other orders.

Let n be even. Let w be a word over a k-letter alphabet with even palindrome prefix lengths given by S, and let a be a single letter. Then clearly wa has exactly the same palindromic prefixes as w. Since a is arbitrary, the result follows. ∎

Let S be any subset of {1,2,…,⌊n/2⌋}. Let oppk,S(n) denote the number of length-n words over a k-letter alphabet having odd palindrome prefixes of order i for each i∈S, and no others.

To see the first claim, observe that if both g(w) and a1 are given, then we can uniquely reconstruct w. Since a1 is arbitrary, this gives a k to 1 map.

To see the second claim, suppose w=a1a2⋯an has an odd palindrome prefix of order i. Then a2i+2−j=aj for 1≤j≤i+1. Hence, applying the map g to w gives

which is clearly an even palindrome of order i.

Hence for n odd we get

where we have used Proposition 4.

And for n even we get

5 Interlude: the permutation defined by f

The map f defined in Section 2 can be considered as a permutation on a1a2⋯an. In this case, we write it as fn. For example, if n=7, the resulting permutation fn is

This is an interesting permutation that has been well-studied in the context of card-shuffling, where it is called the milk shuffle. A classic result about the milk shuffle is the following [5]:

In this section we consider the words having no nontrivial palindrome prefix. (Recall that a palindrome is trivial if it is of length ≤1.) This is only of interest for alphabet size k≥3, for if k=2, the only such words are of the form 01i and 10i.

Let a(n)=ak(n) denote the number of such words over a k-letter alphabet. We use the technique of [1, 4] to show that ak(n)∼ρkkn for a constant ρk and large n.

Consider the words of length 2n−1 having no nontrivial palindrome prefix. By appending a new letter, we get ka(2n−1) words. However, some of these words will be palindromes of length 2n. But since no proper prefix is a palindrome, the first half of these palindromes will be counted by a(n). This gives (1). A similar argument works to prove (2). ∎

For k=3 the corresponding sequence is given below and is sequence A252696 in the OEIS:

It now follows that

By telescoping cancellation applied to (3), we now get

Note that ρk is the limiting frequency of words having no nontrivial palindrome prefix.

and so we get a functional equation for f(X):

By iterating this functional equation, and using the fact that f(ϵ)∼ϵ for small real ϵ, we get an expression for f(1/k):

This is very rapidly converging; for k=3 only 6 terms are enough to get 60 decimal places of f(1/k):

It is natural to conjecture that our bijections connecting words with no border and no even palindrome prefix might also apply to words having no square prefix. However, this is not the case. Let sk(n) denote the number of length-n words over Σk having no square prefix. When k=2, for example, the two sequences sk(n) and vk(n) differ for the first time at n=10, as the following table indicates.

Chaffin, Linderman, Sloane, and Wilks [2, §3.7] conjectured that s2(n)∼α2⋅2n for a constant α2≐0.27. In this section we prove this conjecture in more generality.

The first few values of c2(n) and d2(n) are given in the following table.

To estimate the value of

βk (and hence αk) we use the inequalities