Binary relation extraction methods have been widely studied in recent years. However, few methods have been developed for higher n-ary relation extraction. One limiting factor is the effort required to generate training data. For binary relations, one only has to provide a few dozen pairs of entities per relation, as training data. For ternary relations (n=3), each training instance is a triplet of entities, placing a greater cognitive load on people. For example, many people know that Google acquired Youtube but not the dollar amount or the date of the acquisition and many people know that Hillary Clinton is married to Bill Clinton by not the location or date of their wedding. This makes higher n-nary training data generation a time consuming exercise in searching the Web. We present a resource for training ternary relation extractors. This was generated using a minimally supervised yet effective approach. We present statistics on the size and the quality of the dataset. 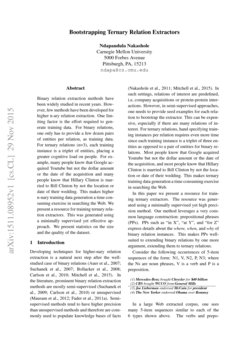 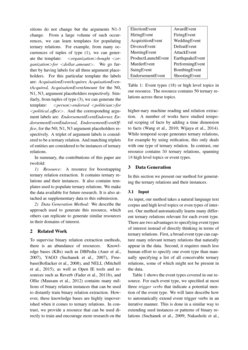 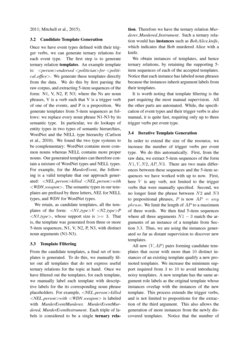 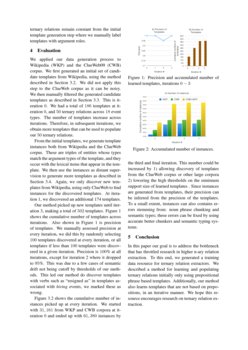 Developing techniques for higher-nary relation extraction is a natural next step after the well-studied case of binary relations [Auer et al.2007, Suchanek et al.2007, Bollacker et al.2008, Carlson et al.2010, Mitchell et al.2015]. In the literature, prominent binary relation extraction methods are mostly semi-supervised [Suchanek et al.2009, Carlson et al.2010] or unsupervised [Mausam et al.2012, Fader et al.2011a]. Semi-supervised methods tend to have higher precision than unsupervised methods and therefore are commonly used to populate knowledge bases of facts [Nakashole et al.2011, Mitchell et al.2015]. In such settings, relations of interest are predefined, i.e, company acquisitions or protein-protein interactions. However, in semi-supervised approaches, one needs to provide seed examples for each relation to bootstrap the extractor. This can be expensive, especially if there are many relations of interest. For ternary relations, hand specifying training instances per relation requires even more time since each training instance is a triplet of three entities as opposed to a pair of entities for binary relations. Most people know that Google acquired Youtube but not the dollar amount or the date of the acquisition, and most people know that Hillary Clinton is married to Bill Clinton by not the location or date of their wedding. This makes ternary training data generation a time consuming exercise in searching the Web.

In this paper we present a resource for training ternary extractors. The resource was generated using a minimally supervised yet high precision method. Our method leverages a very common language construction: prepositional phrases (PPs). PPs such as “in X”, “at Y”, and “for Z” express details about the where, when, and why of binary relation instances. This makes PPs well-suited to extending binary relations by one more argument, extending them to ternary relations.

Consider the following occurrences of 5-item sequences of the form: N1, V, N2, P, N3; where the Ns are noun phrases, V is a verb and P is a preposition.

In summary, the contributions of this paper are twofold:

2)  Data Generation Method: We describe the approach used to generate this resource, which others can replicate to generate similar resources in their domains of interest.

In this section we present our method for generating the ternary relations and their instances.

Table 1 shows the event types covered in our resource. For each event type, we specified at most three trigger verbs that indicate a potential mention of the event type. We will later describe how to automatically extend event trigger verbs in an iterative manner. This is done in a similar way to extending seed instances or patterns of binary relations [Suchanek et al.2009, Nakashole et al.2011, Mitchell et al.2015].

Once we have event types defined with their trigger verbs, we can generate ternary relations for each event type. The first step is to generate ternary relation templates. An example template is: <person>endorsed <politician>for <political_office>. We generate these templates directly from the data. We do this by first parsing the raw corpus, and extracting 5-item sequences of the form: N1, V, N2, P, N3; where the Ns are noun phrases, V is a verb such that V is a trigger verb of one of the events, and P is a preposition. We generate templates from 5-item sequences as follows: we replace every noun phrase N1-N3 by its semantic type. In particular, we do lookups of entity types in two types of semantic hierarchies, WordNet and the NELL type hierarchy [Carlson et al.2010]. We found the two type systems to be complementary: WordNet contains more common nouns whereas NELL contains more proper nouns. Our generated templates can therefore contain a mixture of WordNet types and NELL types. For example, for the MurderEvent, the following is a valid template that our approach generated: <NEL_person>killed <NEL_person>with <WDN_weapon>. The semantic types in our templates are prefixed by three letters, NEL for NELL types, and WDN for WordNet types.

From the candidate templates, a final set of templates is generated. To do this, we manually filter out all templates that do not express useful ternary relations for the topic at hand. Once we have filtered out the templates, for each template, we manually label each template with descriptive labels for the its corresponding noun phrase placeholders. For example, <NEL_person>killed <NEL_person>with <WDN_weapon> is labeled with MurderEventMurderer, MurderEventMurdered, MurderEventInstrument. Each triple of labels is considered to be a single ternary relation. Therefore we have the ternary relation Murderer_Murdered_Instrument. Such a ternary relation would has instances such as Bob,Alice,knife, which indicates that Bob murdered Alice with a knife.

We obtain instances of templates, and hence ternary relations, by retaining the supporting 5-item sequences of each of the accepted templates. Notice that each instance has labeled noun phrases because the instances inherit argument labels from their templates.

It is worth noting that template filtering is the part requiring the most manual supervision. All the other parts are automated. While, the specification of event types and their trigger verbs is also manual, it is quite fast, requiring only up to three trigger verbs per event type.

In order to extend the size of the resource, we increase the number of trigger verbs per event type. We do this automatically. First, from the raw data, we extract 5-item sequences of the form N1,V,N2,AP,N3. There are two main differences between these sequences and the 5-item sequences we have worked with up to now. First, here V is any verb, not limited to the trigger verbs that were manually specified. Second, we no longer limit the phrase between N2 and N3 to prepositional phrases, P is now AP=any phrase. We limit the length of AP to a maximum of three words. We then find 5-item sequences where all three arguments N1−3 match the arguments of an instance of a template from Section 3.3. Thus, we are using the instances generated so far as distant supervision to discover new templates.

All new (V,AP) pairs forming candidate templates that occur with more than 10 distinct instances of an existing template qualify a new promoted templates. We increase the minimum support required from 3 to 10 to avoid introducing noisy templates. A new template has the same argument role labels as the original template whose instances overlap with the instances of the new template. This process extends the trigger verbs, and is not limited to prepositions for the extraction of the third argument. This also allows the generation of more instances from the newly discovered templates. Notice that the number of ternary relations remain constant from the initial template generation step where we manually label templates with argument roles.

We applied our data generation process to Wikipedia (WKP) and the ClueWeb09 (CWB) corpus. We first generated an initial set of candidate templates from Wikipedia, using the method described in Section 3.2. We did not apply this step to the ClueWeb corpus as it can be noisy. We then manually filtered the generated candidate templates as described in Section 3.3. This is iteration 0. We had a total of 186 templates at iteration 0, and 50 ternary relations across 18 event types. The number of templates increase across iterations. Therefore, in subsequent iterations, we obtain more templates that can be used to populate our 50 ternary relations.

From the initial templates, we generate template instances both from Wikipedia and the ClueWeb corpus. These are triples of entities whose types match the argument types of the template, and they occur with the lexical items that appear in the template. We then use the instances as distant supervision to generate more templates as described in Section 3.4. Again, we only discover new templates from Wikipedia, using only ClueWeb to find instances for the discovered templates. At iteration 1, we discovered an additional 174 templates.

Our method picked up new templates until iteration 3, making a total of 502 templates. Figure 1 shows the cumulative number of templates across iterations. Also shown in Figure 1 is precision of templates. We manually assessed precision at every iteration, we did this by randomly selecting 100 templates discovered at every iteration, or all templates if less than 100 templates were discovered in a given iteration. Precision is 100% at all iterations, except for iteration 2 where it dropped to 95%. This was due to a few cases of semantic drift not being cutoff by thresholds of our methods. This led our method do discover templates with verbs such as “resigned as” in templates associated with hiring events, we marked these as wrong.

Figure 3.2 shows the cumulative number of instances picked up at every iteration. We started with 31,161 from WKP and CWB corpora at iteration 0 and ended up with 61,380 instances by the third and final iteration. This number could be increased by 1) allowing discovery of templates from the ClueWeb corpus or other large corpora 2) lowering the high thresholds on the minimum support size of learned templates . Since instances are generated from templates, their precision can be inferred from the precision of the templates. To a small extent, instances can also contains errors stemming from: noun phrase chunking and semantic types; these errors can be fixed by using accurate better chunkers and semantic typing systems.